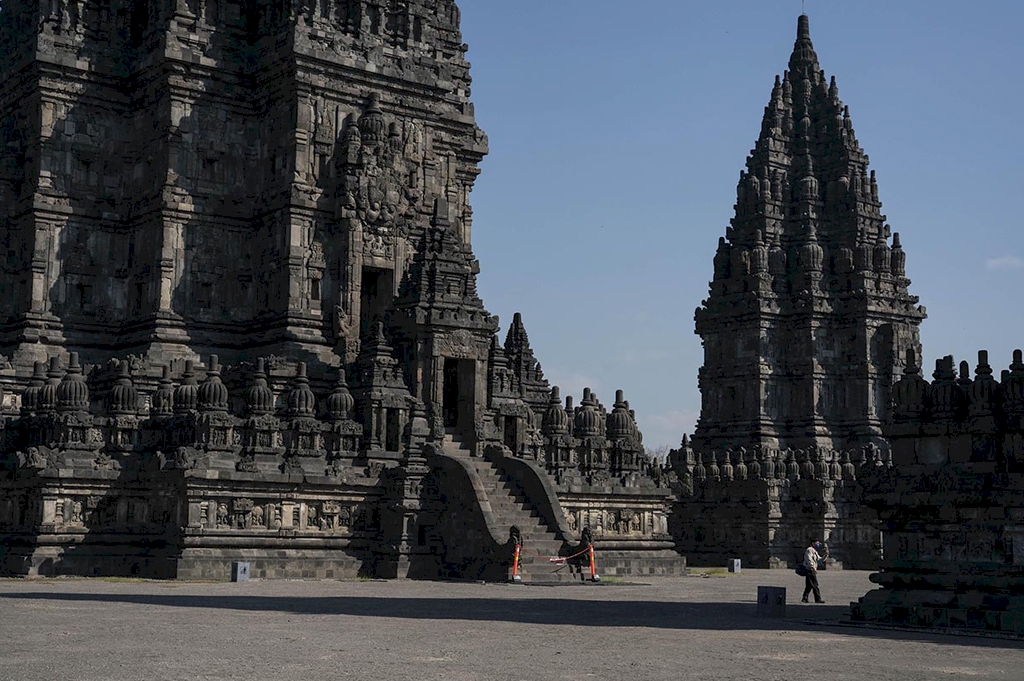 The word ‘candi’ (temple) refers to buildings of various shapes and functions, such as a worshipping place, a religious teaching center, a funerary place for keeping ashes of kings, a dwelling place of the divine, a royal bathing place, or a gateway. Although temples once served many functions, they were built mostly to accommodate Buddhism or Hinduism religious activities.

The existence of temples is inseparable from the history of Javanese kingdoms and the development of Buddhism and Hinduism in Java from 7th century to 14th century. Since Buddhism and Hinduism came from India, the design of most temples adopted Indian style in many aspects, such as the constructing techniques, architectural style, and decorations. However, because of the ample influence of local culture and natural environment, the design of Indonesian temples retains its unique characteristics in the usage of building material, constructing techniques and decoration style. The temple walls are commonly adorned with relief sculpture depicting a story or religious teachings.

Temples in Central Java are unique not only because of their location and shape of the building, but also because of their distinctive high relief sculpture. Objects in the relief sculpture are naturally rendered and always face frontward. There are no distinct boundaries between fragments, while some parts are left without sculptures. There are numerous sculptures of rounded Kalpataru, a sacred tree, which project from the background, all over the walls of Central Java temples.

Temples in East Java are typically slimmer, with the roof composed of horizontal layers of diminishing size and topped with a cubical stone. It is also common at the temples that on the sides of gate frames, there are statues or sculpture of dragons instead of sculpture of Makaras. Most of them are adorned with bas-relief in symbolical style. Objects in the relief sculpture are shown half-face, and the characters depicted are mostly from Hindu epics. Tipically, they are decorated with relief sculpture or statues that represent Trimurti, the Hindu trinity of gods, or gods relating to Shiva such as Durga, Ganesha or Agastya. In most cases, Hindu-style figures and decorations are presented along with Buddhist figurines or adornment of Tantrayanistic Buddhism.

Building nuanced enshrinement of Buddha among others Kalasan, Banyunibo, and Candi Sari. Building enshrinement more nuanced Hindu dominant in Yogyakarta after Rakai Pikatan possibility as early ruler of Mataram Hindu temple construction was made by the Government Hindu Mataram.

There are 6 temples on the Bali Province. These Temples are; Uluwatu, Tanah Lot, Mengening, Kalibukbuk, Gunung Kawi, and Taman Ayun. Unlike temples in Java, temples in Bali (called pura), become parts of the life of Balinese who mostly are Hindu. Balinese temple is a place of worship for Hindu. Each Hindu family has family temple to worship Hyang Widhi and their ancestors, so that there are thousands of temples in the island of Bali.

In the last 30 years, some new historical sites were discovered in several different places in West Java, such as Bojongmenje Temple in Kampong Bojongmenje, Cangkuang Village, Rancaekek Sub-district, Bandung District (discovered on August 18th, 2002); Ronggeng Temple or Pamarican Temple in Pamarican Sub-dsitrict, Ciamis District (discovered in 1977); Batujaya Temple complex in Batujaya Sub-district and in Cibuaya, Karawang District; also Cangkuang Temple in Cangkuang Village, Leles Sub-district, Garut District. Although facts about when and by whom those temples were built have yet been successfully revealed, experts are optimistic that the discoveries will contribute to years of efforts to disclose the history of kingdoms in West Java.

There are 2 temples in South Kalimantan: 1. Agung Temple, a Hindu temple in Central Amuntai, North Hulu Sungai Regency; and 2. Laras Temple, a Buddhist temple in Tapin.

In Sumatra, among the temples in the Padang Lawas area, the best known is Candi Bahal which is located in Bahal Village. . In the Bahal Temple complex, there are three renovated temple buildings, namely Bahal I, Bahal II and III Bahal Temples. Another quite large and famous temple in Sumatra is the Muara Takus Temple which is located in Riau Province, precisely in Muara Takus Village, Tigabelas Koto District, Kampar Regency.