Cangkuang (Indonesian: Candi Cangkuang) is a small 8th-century Shivaist candi (Hindu temple) located in Kampung Pulo village, Cangkuang, Kecamatan Leles, Garut Regency, West Java, Indonesia. The temple is one of very few Hindu-Buddhist temples discovered in West Java, other temples include Batujaya and Bojongmenje temple. Three meters to the south of the temple is an ancient Islamic tomb of Embah Dalem Arief Muhammad, believed to be the community elders of Cangkuang village during the Islamization of Sundanese in the 17th century.
more..
Location The town of Leles is around 40 kilometers southeast of Bandung on the way to Garut. The temple is located several kilometers east of the Leles-Garut main road. The temple occupies a 16.5 hectares island called Kampung Pulo (“island village”) surrounded by a small lake (Sundanese: situ) called Situ Cangkuang. Near the temple there is a traditional Sundanese village. The temple, tomb, traditional village and the areas surrounding the island and lake, it is a cultural and archaeological sanctuary. Originally the whole island was surrounded by the lake, however today the lake receded and water only fill the northern parts, while the southern parts of the lake are reclaimed and cultivated as a paddy field. The temple’s name cangkuang, was derived from Sundanese native name for the pandan tree (pandanus furcatus) found around the temple in Kampung Pulo island. 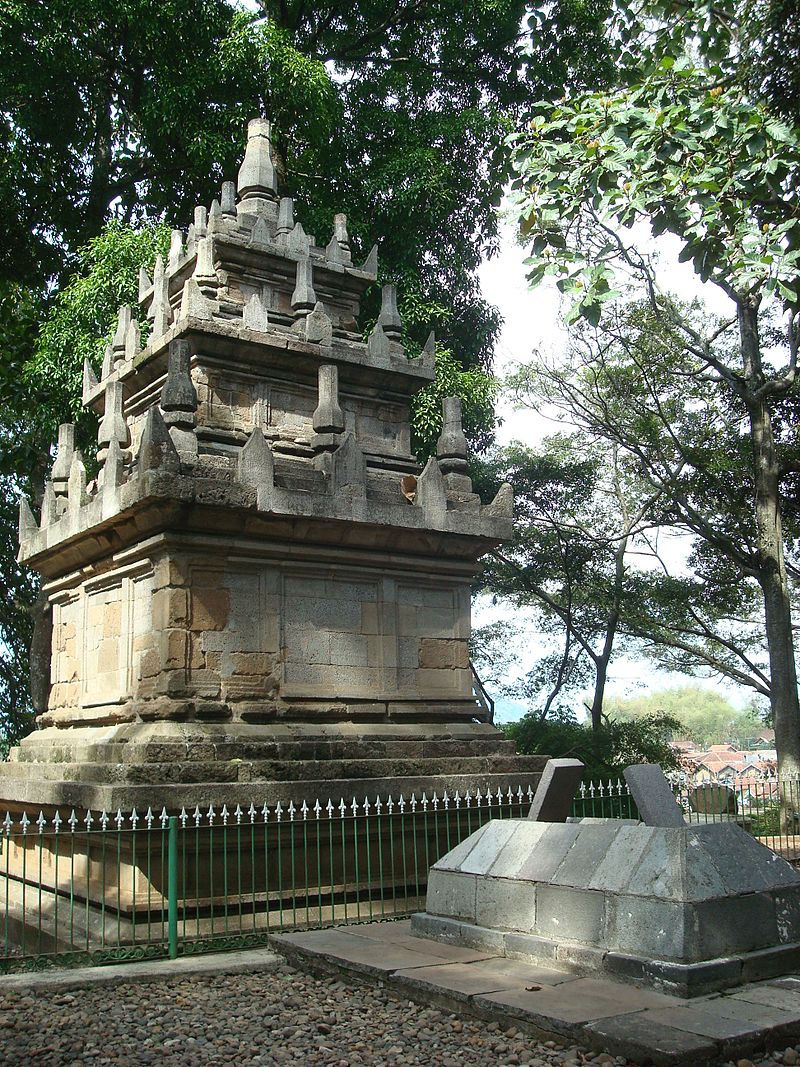 The temple is made from andesite stones, the temple’s base measures 4.5 x 4.5 meters and 8.5 meters tall. The temple faces east, on the east side there is a flight of stairs leading to the portal and a small main room (garbhagriha). Inside the main room there is a small 62 cm tall stone statue of Shiva. The statue is damaged, the hands are broken and the face is quite eroded. On the pedestal of the statue there is a carving of Nandi’s head. The temple is quite simple and unadorned with minimal ornaments. 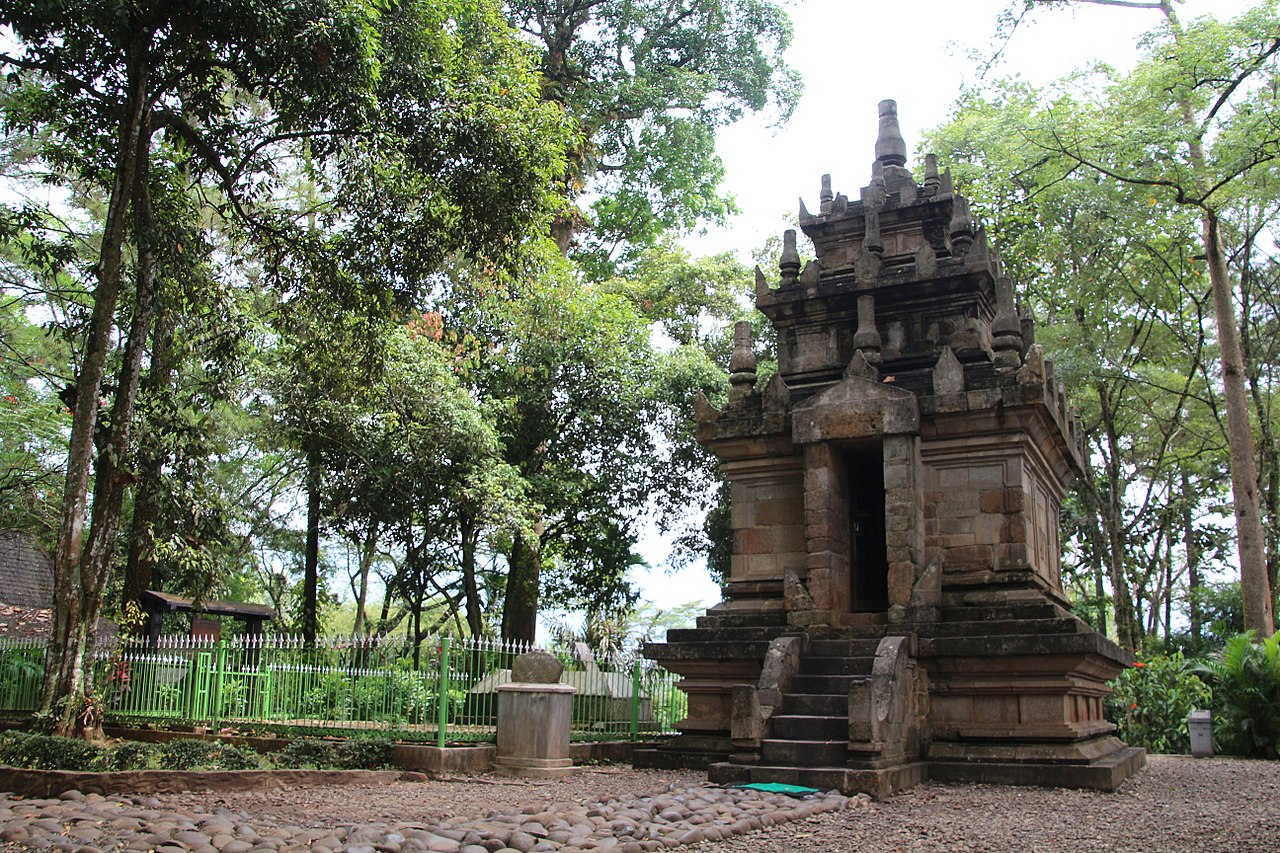 The roof is arranged in three receding steps adorned with pseudo-lingam pinnacles. The architectural style is similar to those of early Central Javanese Hindu temples. Judging from the stone decay degradation and the simple style of the temple, experts estimate that the temple is dated from the early 8th-century, about the same age as the Dieng temples, and slightly older than temples of southern Central Java such as Prambanan. 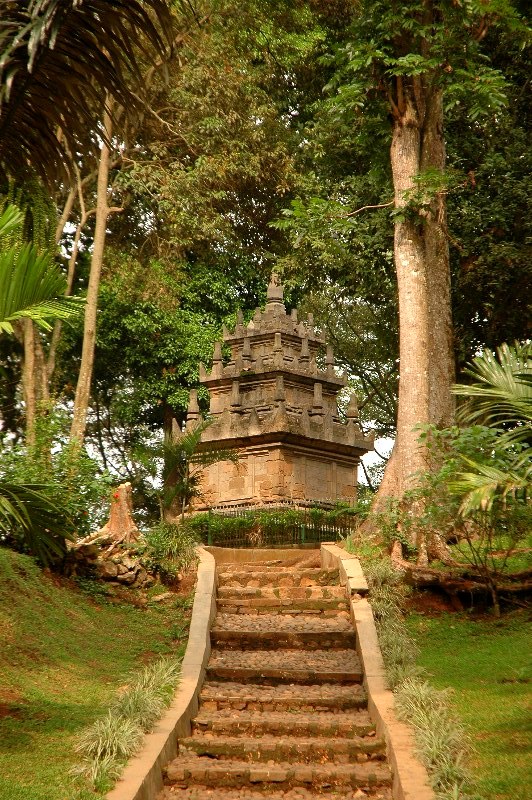 History This temple was first discovered in 1966 by the research team Harsoyo and Uka Tjandrasasmita based on Vorderman’s report in the book Notulen Bataviaasch Genotschap published in 1893 regarding the existence of a damaged statue and an ancient tomb on the hill of Kampung Pulo, Leles. The tomb and statue of Shiva in question have indeed been found. At the beginning of the research, it was seen that there were stones which were the ruins of a temple building. The ancient tomb in question is Arief Muhammad’s tomb, which the locals consider to be their ancestor. In addition to finding the ruins of the temple, there are also knife fragments and large stones which are thought to be relics of the megalithic era. Subsequent research (in 1967 and 1968) succeeded in excavating the tomb. 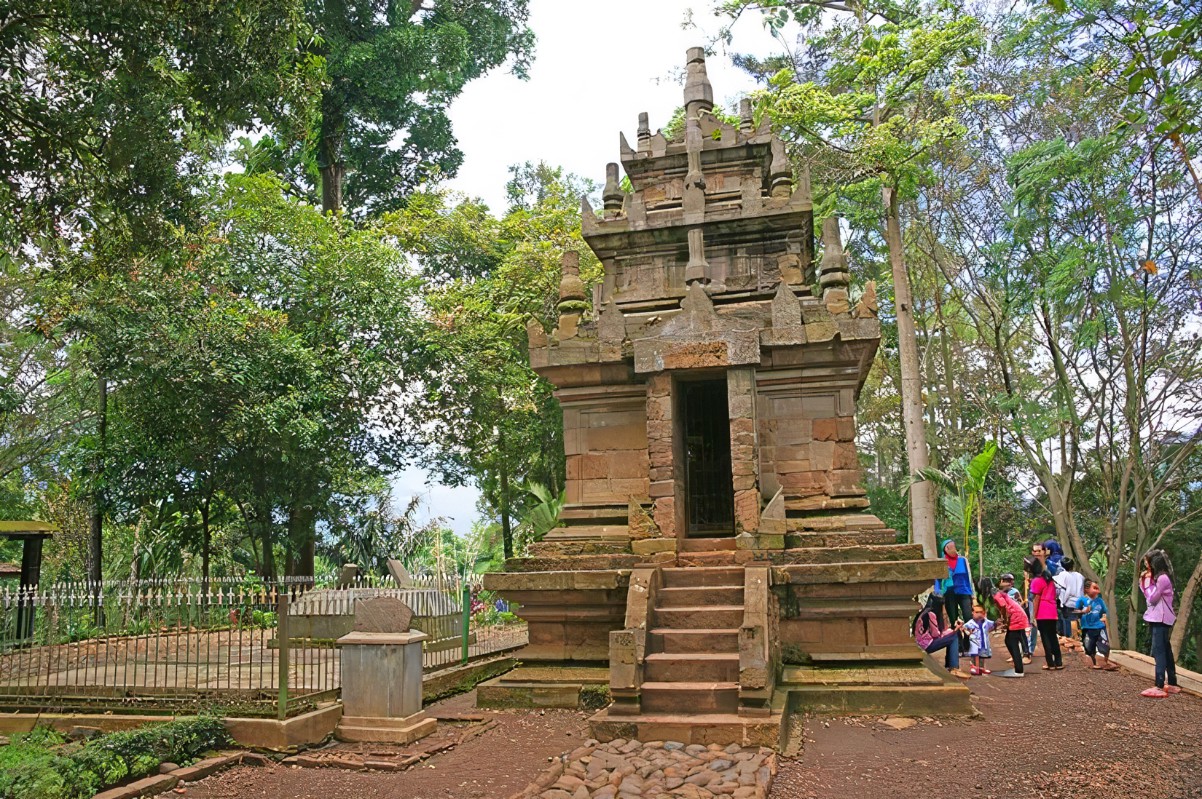 Although it is almost certain that this temple is a relic of Hinduism (around the 8th century AD, the same era as the temples at Batujaya and Cibuaya sites), what is surprising is that there is an Islamic cemetery beside it. At the beginning of the research, it was seen that there was a stone which was the ruins of a temple building and beside it there was an ancient tomb along with a Shiva statue which was located in the middle of the ruins of the building. With the discovery of block-shaped andesite stones, the research team led by Tjandrasamita felt confident that there was originally a temple in the vicinity. Locals often use these blocks for gravestones. 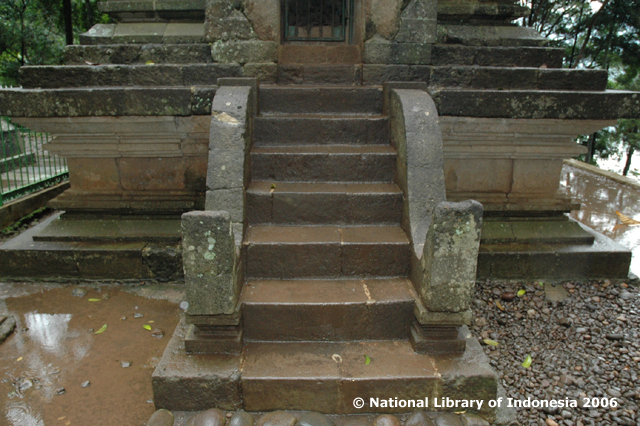 Based on this belief, researchers conducted excavations at that location. Near Arief Muhammad’s grave, researchers found a 4.5 x 4.5 meter temple foundation and scattered stones from other temples. With this discovery the History Team and the Archaeological Institute immediately carried out research in the area. Until 1968 research was still ongoing. 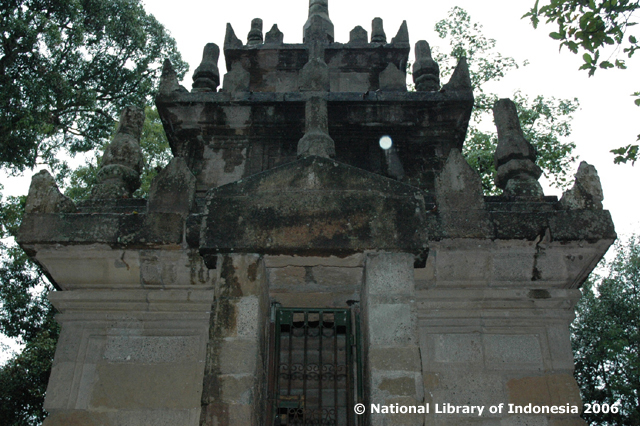 The process of restoring the temple began in 1974-1975 and the reconstruction was carried out in 1976 which included the body frame, roof and Shiva statue and was equipped with a joglo museum with the intention of being used to store and inventory historical objects, former cultural heritage from all over Garut Regency. During the restoration work in 1974, the temple stones which were parts of the foot of the temple were rediscovered. The main obstacle to the reconstruction of the temple was that only about 40% of the original rock was found, so that the original stone used to reconstruct the temple building was only about 40%. The rest is made from a mixture of cement, coral, sand and iron. Cangkuang Temple is the first temple to be restored, and also to fill the historical void between Purnawarman and Pajajaran. Experts suspect that Cangkuang Temple was founded in the 8th century, based on the weathered level of the rock, as well as the simplicity of the form (absence of relief) 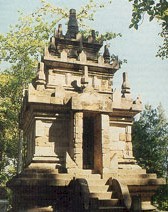 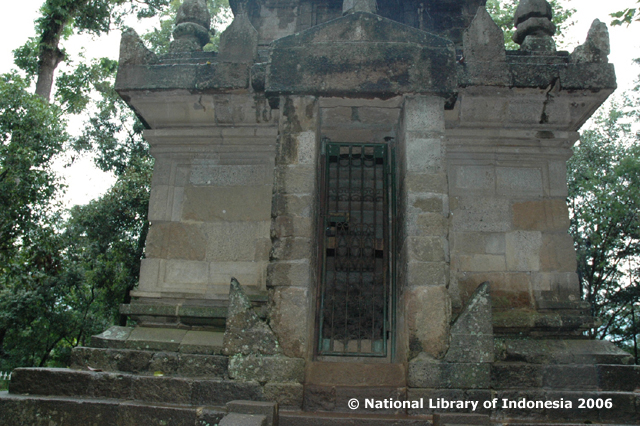 Among the remains of the temple buildings, a statue was also found (in the 1800s) in a cross-legged position on the lotus padmasana. Left leg crossed flat with the base facing the inside of the right thigh. Right foot facing down on the pedestal. In front of the left foot there is a cow’s head (nandi) whose ears point forward. With this nandi head, experts assume that this is a Shiva statue. Both hands up above the thighs. On his body there are trimming the belly, trimming the chest and trimming the ears. The condition of this statue is damaged, the face is flat, the hands up to both wrists are missing. Face width 8 cm, shoulder width 18 cm, waist width 9 cm, padmasana 38 cm (height 14 cm), pedestal 37 cm & 45 cm (height 6 cm and 19 cm), height 41 cm. Cangkuang Temple as it is seen today, is actually the result of engineering reconstruction, because the original building is only 40% of it. Therefore, the actual shape of the Cangkuang Temple building is not yet known.