Dieng Temples is the group of 7th and/or eighth century Hindu candi or temple compounds located in Dieng Plateau, near Wonosobo, Central Java, Indonesia. These edifices originate from the Kalingga Kingdom. The plateau is home of eight small Hindu temples that are among the oldest surviving religious structures ever built in Java, and the earliest Hindu temples in Indonesia. The temples show many features of Indian Hindu temple architecture.
more..

The Kailasa museum nearby contains many pieces of sculpture removed from the temples. 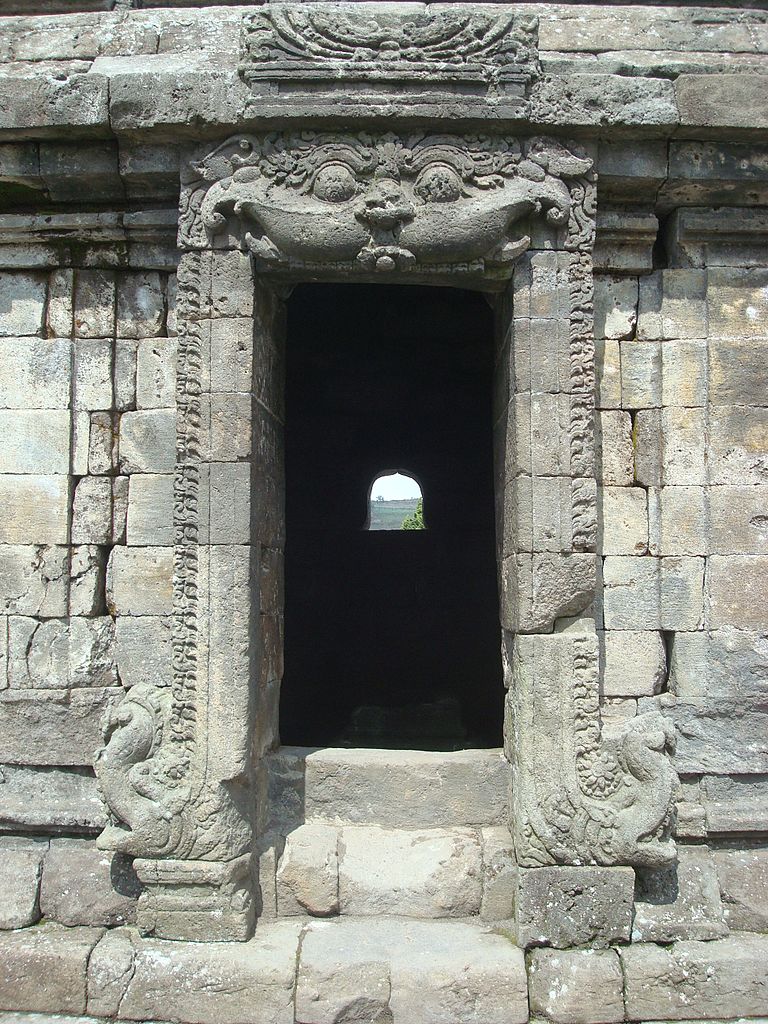 It is unclear when they were built, and were estimated to range from mid 7th century to end of 8th century CE; they are the oldest known standing stone structures in Central Java. They are originally thought to have numbered 400 but only eight remain after local farmers removed stone following the draining of the lake in the 19th century.

Examining the Javanese temple architectural styles, archaeologist grouped the Dieng temples within the Northern Central Javanese style, together with Gedong Songo temples, and to some extents also includes the East Javanese Badut temple, and West Javanese Cangkuang and Bojongmenje temple, and suggested that all of these temples are built within the same period, ranges from 7th to 8th century. 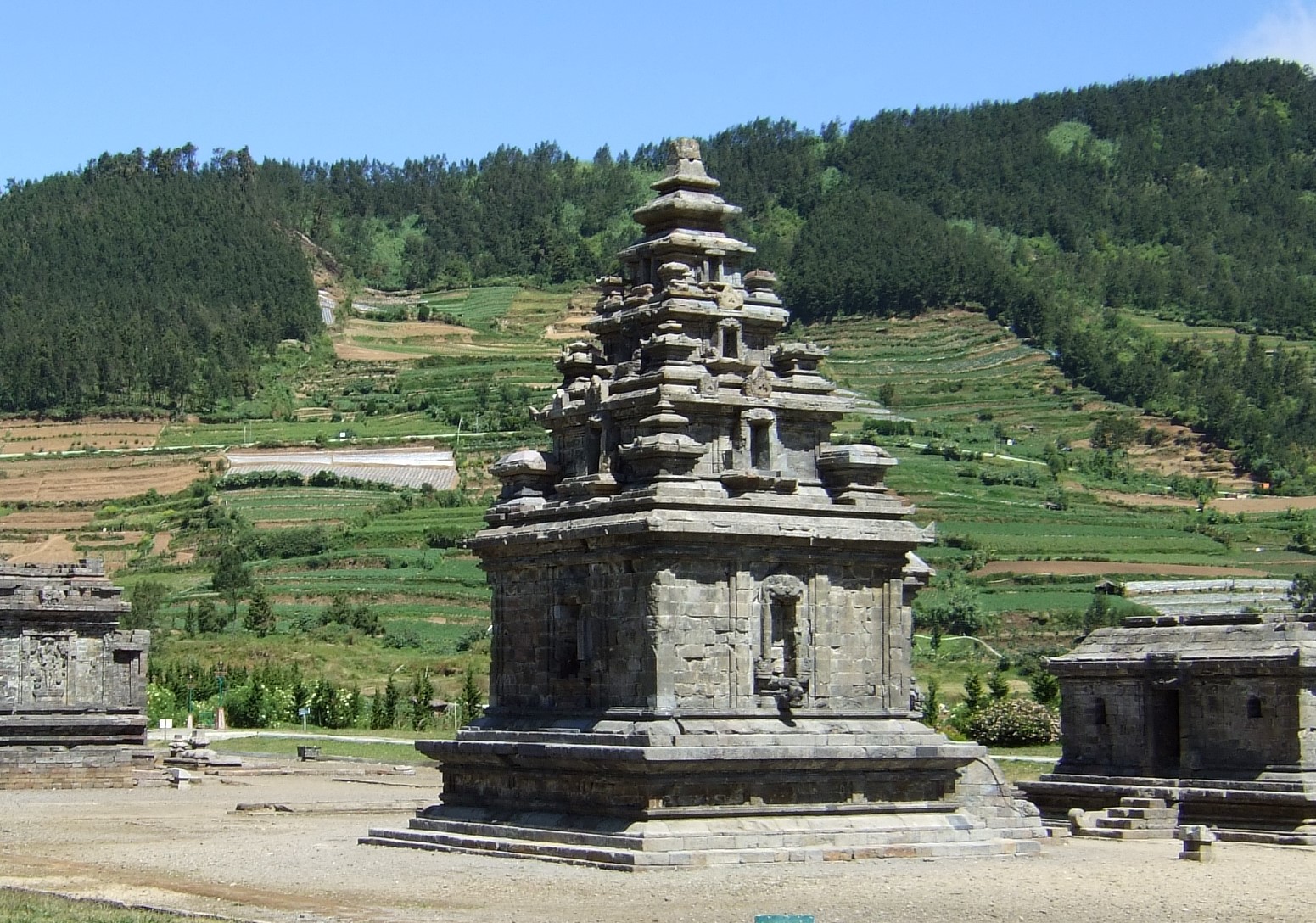 An inscription discovered near Arjuna temple in Dieng was dated circa 808-809 CE, it was the oldest surviving specimen of old Javanese script, which revealed that the Dieng temple is continuously inhabited from mid 7th to early 9th century.

The Dieng temples was rediscovered in 1814 by a visiting British soldier that spotted temples ruin lies in the middle of a lake. At that time the plain surrounding Arjuna cluster was flooded with water and forming small lake. In 1856, Isidore van Kinsbergen led an effort to drain the lake in order to reveal the temples.

The Dutch East Indies Government continued the reconstruction project in 1864, followed by further study and photographs taken by Van Kinsbergen. The temples are now believed to have been named after the heroes of the Hindu epic Mahabharata. 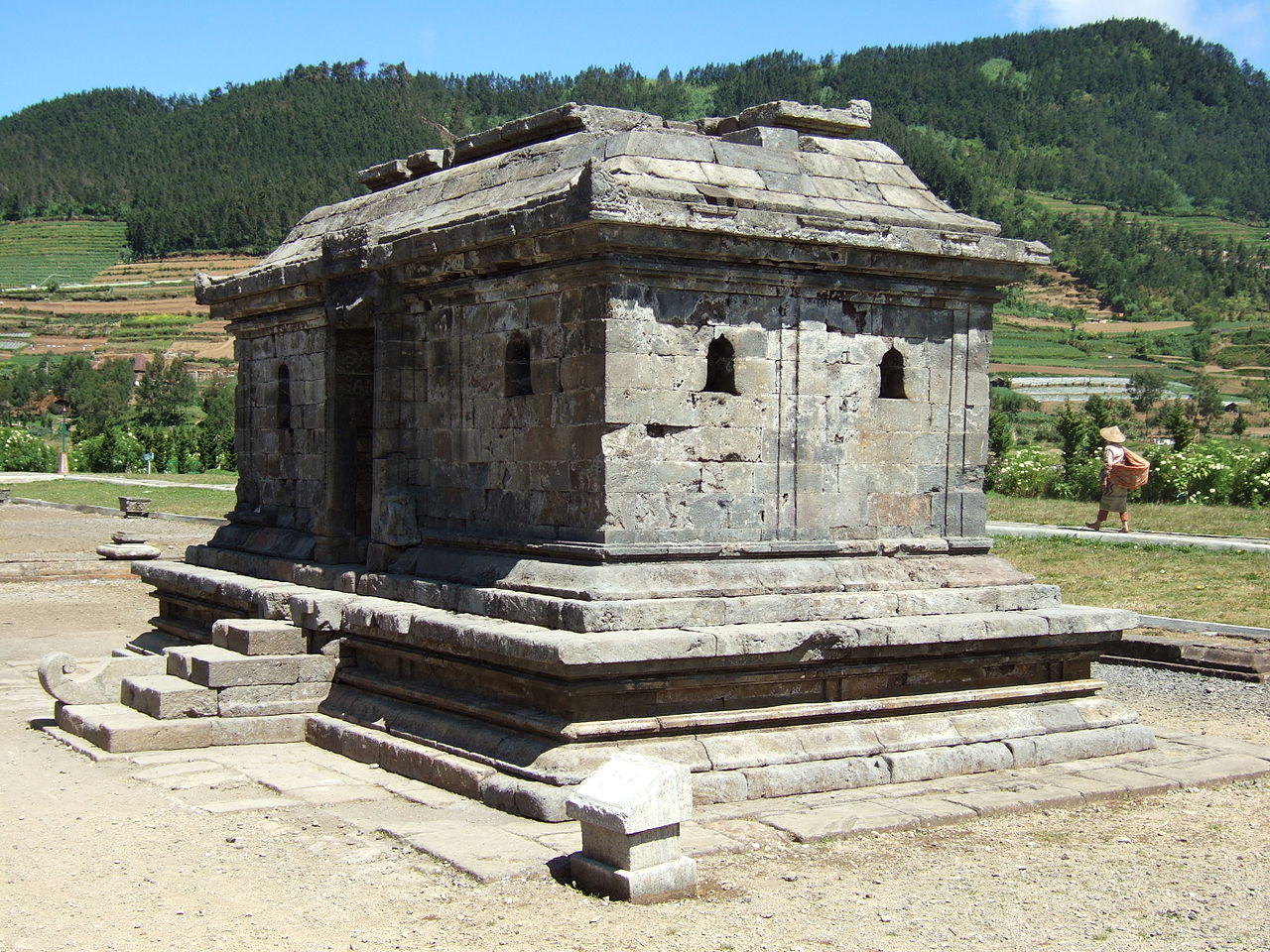 The temples are clustered around three groups; Arjuna, Dwarawati and Gatotkaca clusters, while Bima temple was constructed as a separate single temple.

The main temples compound clustered around the Arjuna temple in the plain surrounded by mountains and hills. Arjuna cluster located in the central area of Dieng plateau, consisting of four temples that lined elongated in north-south direction. 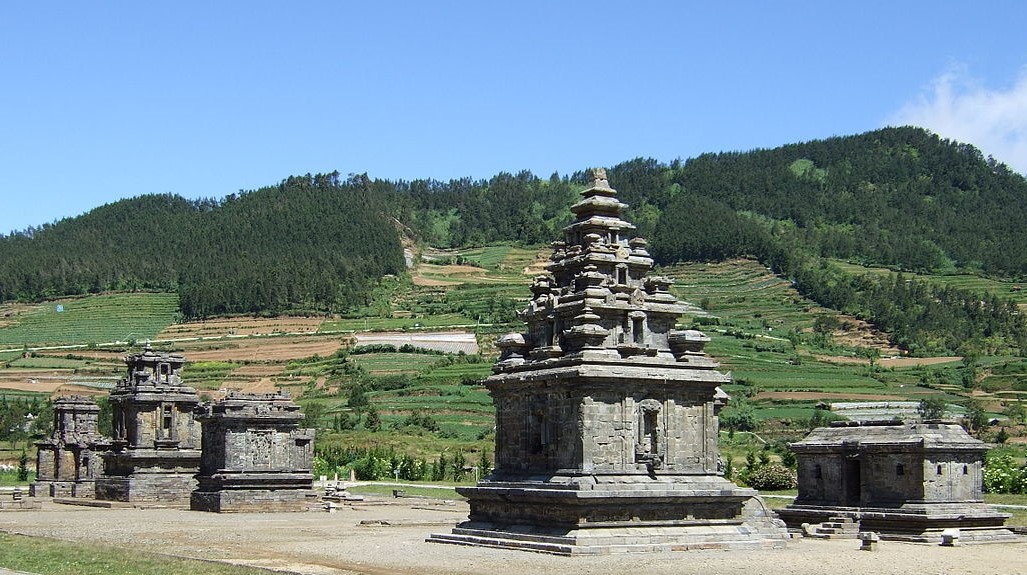 This temple compound is the most intact compared to the other temple group clustered in the Dieng area. They are: Arjuna temple, Compared to other temples, the Arjuna temple is quite intact with complete reconstruction of roof section. Photographs from the 19th century show that the top levels had fallen down; Semar temple; Srikandi temple; Puntadewa temple; and Sembadra temple. 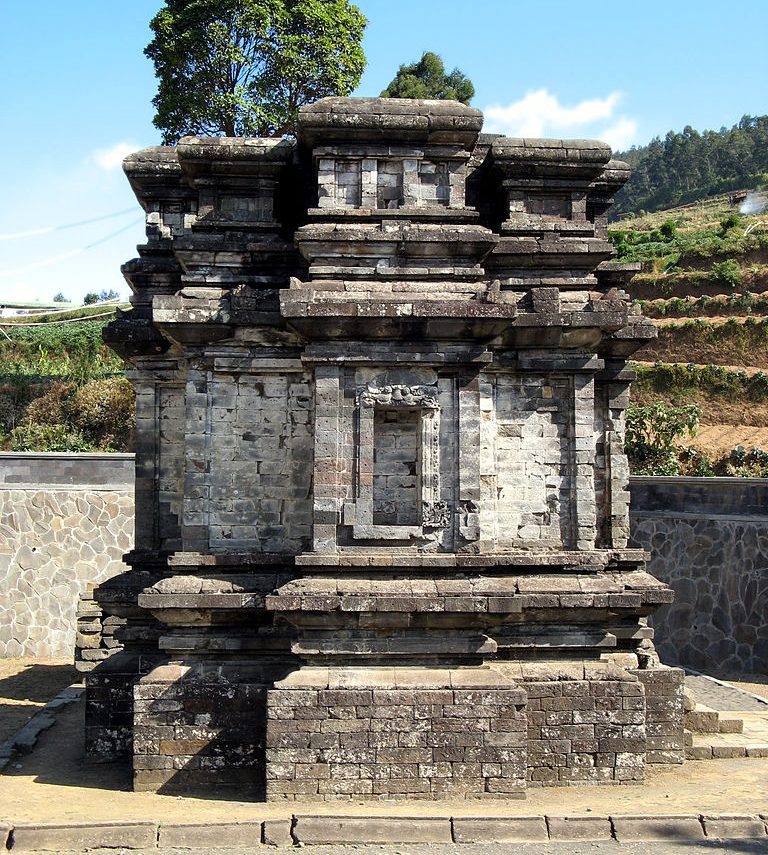 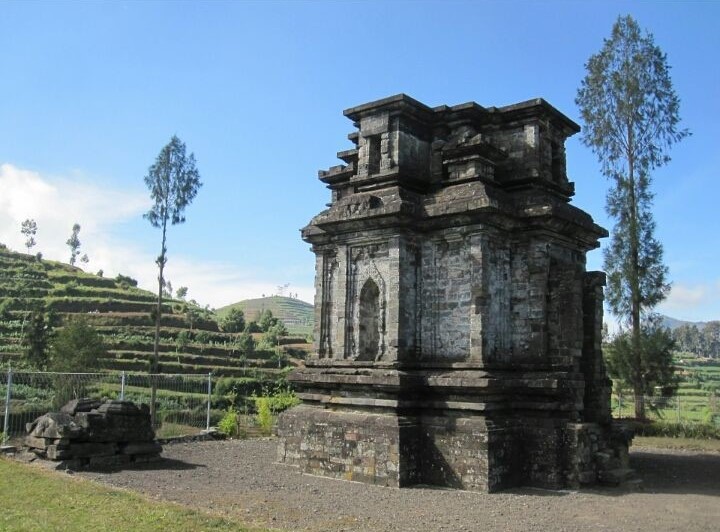 Dwarawati group consisted of four temples, namely Dwarawati, Abiyasa, Pandu, and Margasari temple. However, currently only Dwarawati that remain relatively intact, the rest are in ruins. Only one temple located in this cluster, Dwarawati temple.

Bima temple is a single temple situated on a hill separated from the rest of Dieng temples. This temple is the largest and tallest building in the Dieng temple compound. The shape is different from temples in Central Java in general, and the other temples at this site, and relates more closely to Indian temples. In particular it has been compared to the Parashurameshvara Temple (c. 650) in Bhubaneswar, Odisha, and the very different temple at Bhitargaon. The 7th-century Laxman Temple at Sirpur is closer. 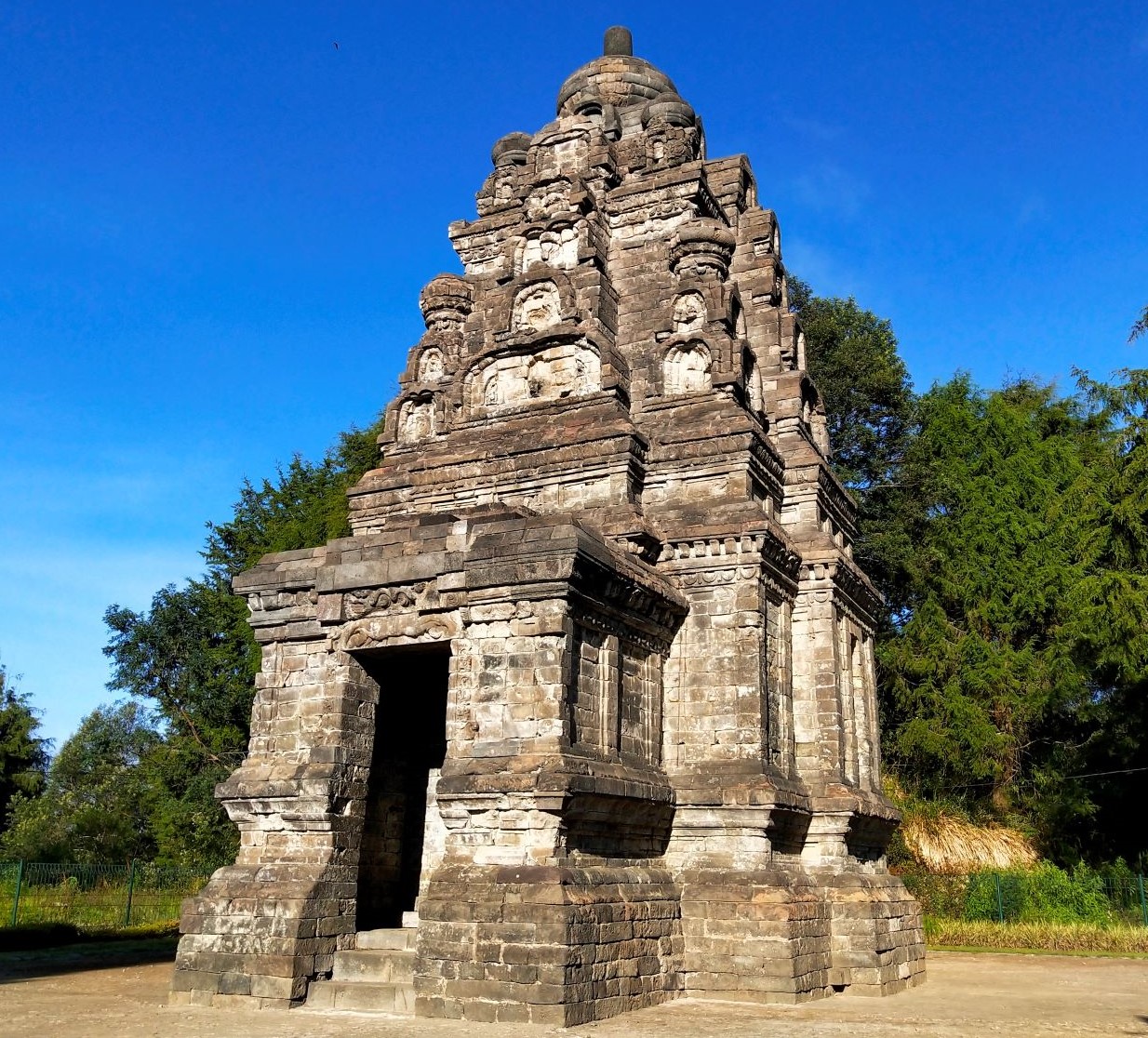 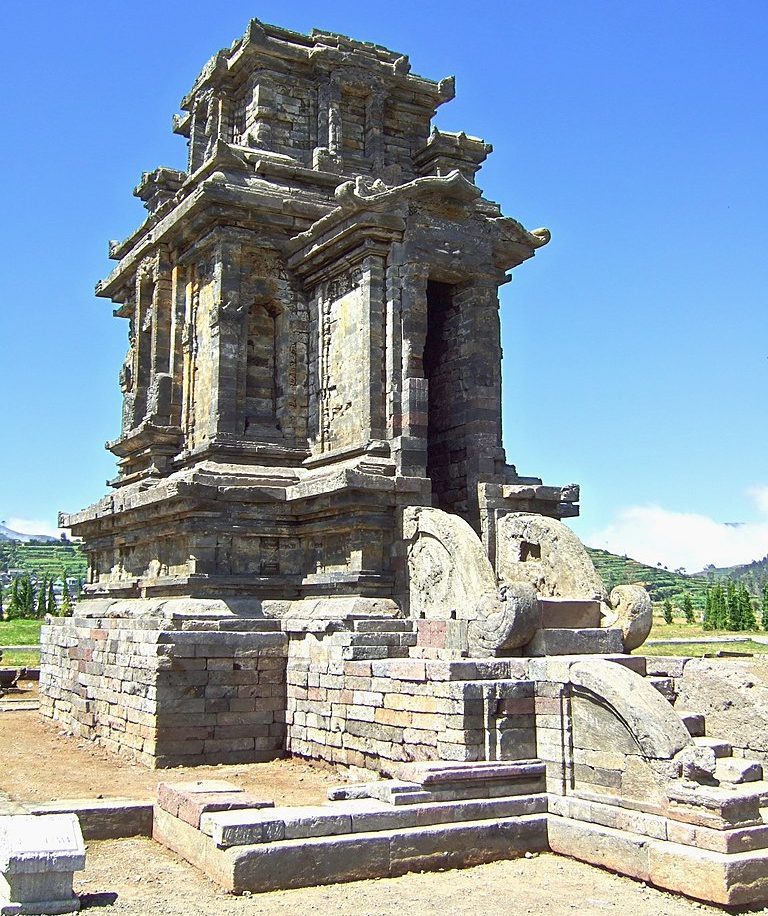 The temple base has a square ground-plan, the facade on each side are slightly protruding out. The front facade protrudes about 1.5 m, serves as a porch before entering the temple’s main chamber. Facades on the other three sides forming niches where originally statues or images were stored, currently all niches are empty.

The roof of the temple consists of 5 levels, with each level are decreasing in size upward. Each level is decorated with lotus double seam and gavaksha or kudu niches.

These are “window”-shaped arches common as a motif in Hindu temple architecture. Here each contains a head looking out. Such ornaments also can be found in other Javanese temples, such as Kalasan, Gebang and Merak temple.

The pinnacle of the roof is missing and its original form is unknown. There are amalaka-type segmented rings at the corners at one level, and the ornament with corbels, leaves and festoons on the lower cornices, below the gavakshas, suggest influence from Chinese Buddhist art.