This temple was discovered by Raffles in 1804 and is a relic of Hindu culture from the 9th century Syailendra Dynasty (927 AD). This temple has a similarity with the Dieng Temple complex in Wonosobo. This temple is located at an altitude of about 1,200 m above sea level so the air temperature here is quite cold (ranging from 19-27 ° C). The location of the nine temples spread across the slopes of Mount Ungaran has beautiful natural scenery. In addition, this tourist attraction is also equipped with hot springs from springs that contain sulfur, a camping area, and horse riding tours.

The Gedong Sanga Temple complex is located at the top of Mount Ungaran, to be precise in Candi Village, Somawono District, Semarang, Central Java . Experts have not been able to confirm the time and purpose of the construction of the Gedong Sanga Temple, because until now no inscription has been found that mention the existence of the ancient building.

Its location in a hilly area underlies the allegation that this temple was built during the early development of Hinduism in Java, namely during the reign of the kings of Wangsa Sanjaya. Judging from its architectural style and location, this Shiva Hindu temple is thought to have been built for worship purposes. At that time the plateau or hill was considered the embodiment of ‘heaven’, the dwelling place of the gods. 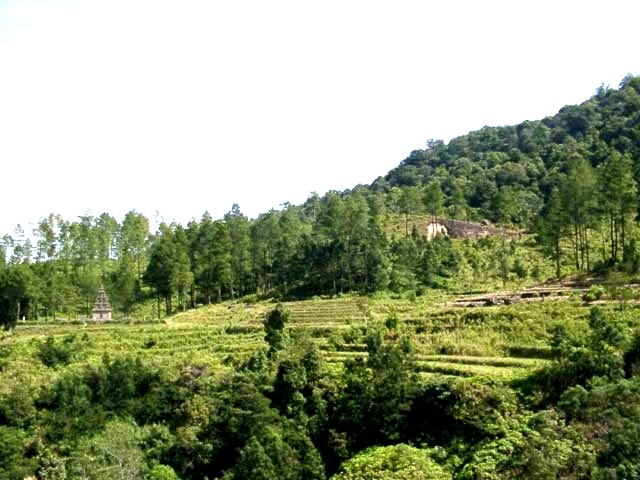 The existence of Candi Gedong Songo was first disclosed in Raffles’ report in 1740. Initially only seven groups of buildings were found, so Raffles called it Gedong Pitu. After its discovery, several studies of the temple were conducted by Dutch archaeologists, including Van Stein Callenfels (1908) and Knebel (1911). In this study, two other groups of temples were found, so that the name was changed to Gedong Sanga (in Javanese it means nine buildings). 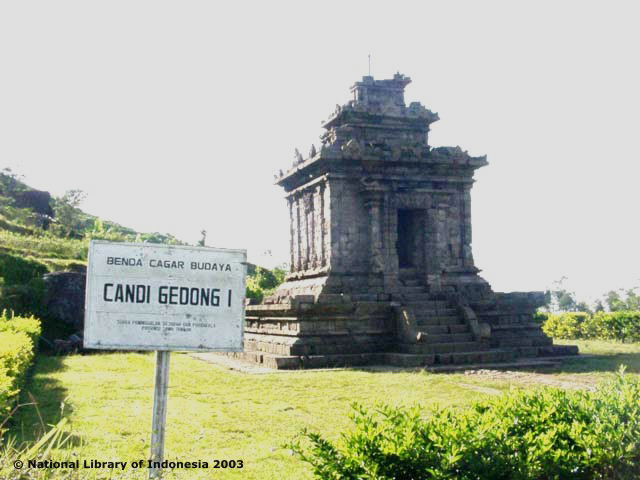 Candi Gedong I consists of one intact building, relatively small in size with a rectangular basic plan. The roof of the temple is in the form of a rectangular structure with decorative sticky paper patterns around it. Half of the roof top appeared to have been destroyed. To the southeast you can see Mount Telomoyo, Mount Merbabu, and Mount Merapi. 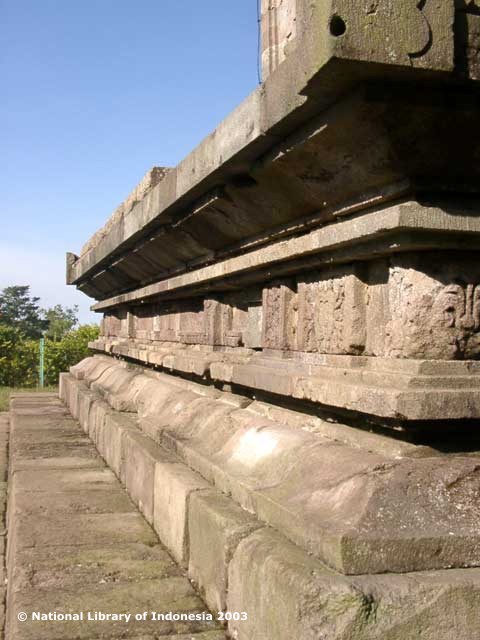 Batur (the base of the temple) with a rectangular base plan decorated with rows of panels with flower-patterned carvings (padma) and simple vines.

The base is about 1 m high, with stairs leading to a small room in the temple body located on the east side. The surface of the batur forms a veranda about 0.5 m wide around the body of the temple. Along the edge of the hallway there was a fence, but most of the stone fences were dated or even missing.

The outer walls of the temple are plain without reliefs or niches to place statues. In the middle of the wall is a flower-patterned sculpture forming a kind of blank frame. It is uncertain whether the frame contained a statue or other sculpture. 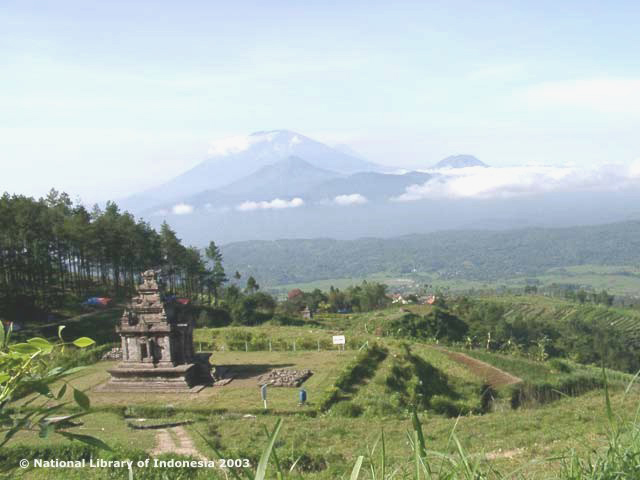 Candi Gedong II consists of a complete building with a square floor plan of about 2.5 m2. The body of the temple stands on a platform about 1 meter high.

The upper seam of the batur protrudes outward to form a 0.5 m wide hall around the temple body. The stairs going up to the veranda are on the east side, right in front of the entrance to the small room in the body of the temple.

The temple door is equipped with a viewing booth that juts out about 1 m from the body of the temple. Above the doorway is decorated with Kalamakara carvings. 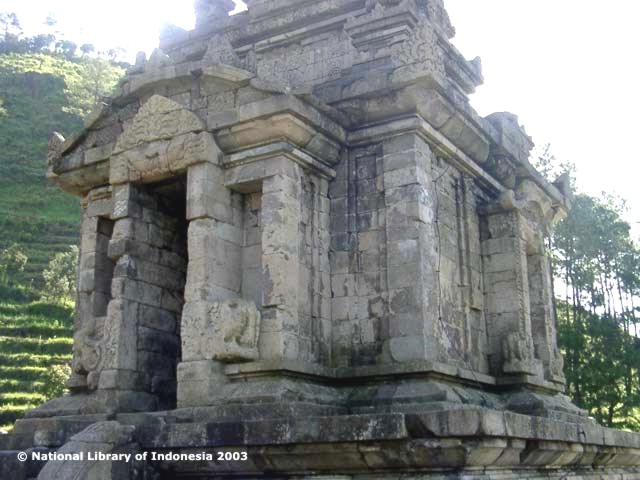 On the outer walls of the north, south and west sides there is a stone arrangement that juts out of the wall, forming a frame of a niche for the statue. The front of the recessed frame is decorated with sculptural patterns of sticky paper.

The roof of the temple is in the form of 3 stacked beams, getting smaller and smaller with the top of the pointed roof. The roof top is currently gone. The surrounding of each cube is decorated with carved patterns of sticky paper.

In each corner there is a decoration shaped like a round crown with pointed tips. Most of the decorations are damaged. In front of the temple building, there is another building with only foundations left and a pile of ruins which is thought to be a Candi Perwara. 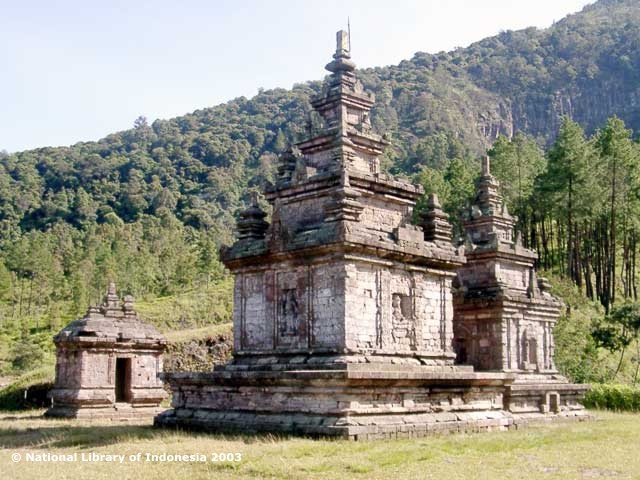 Candi Gedong III consists of three buildings, two of them stand side by side facing east and the last one faces west. All buildings are still complete. 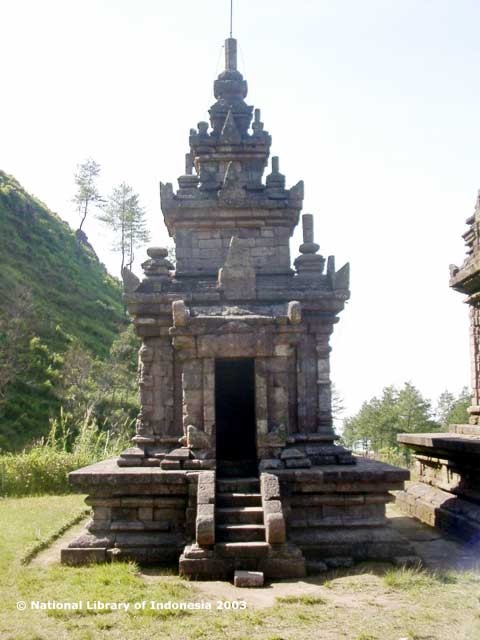 The two buildings facing east almost look alike. The one at the north, however, is slightly bigger and taller than the one at the south. The bigger building is assumed to be the main temple while the smaller one is the ancillary temple. The buildings stand on low rectangular platforms.

The roof of both temples consists of three layers of diminishing size, with a pointing masonry on top of it. The design of temple roof resembles that of Gedong II Temple. Each side of the roof layers is decorated with etching. On each edge, there is a decoration of a round crown with a pointing top. Wrapping around the temple sides is a narrow walkway without fences. 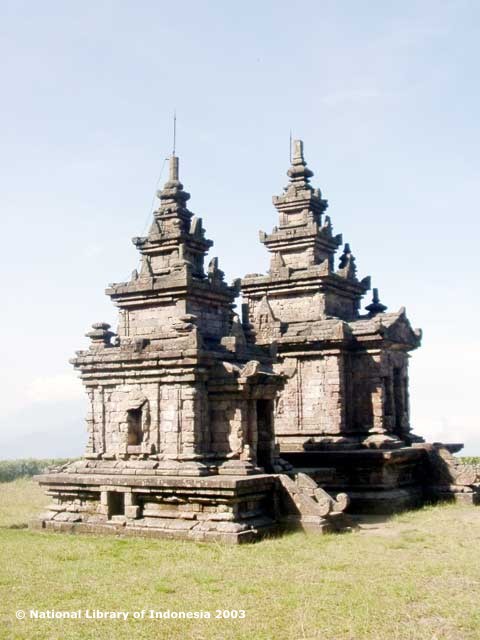 There is a corbelled roof that stretches for a meter in front of an entrance into a small chamber inside the temple. Placed behind the entrance is a stairway with the side parts decorated with flowery design at the bottom of the stairway.

At the north building, there is a niche holding a Shiva statue on each side of the entrance. The Shiva is standing and holding a long bludgeon. 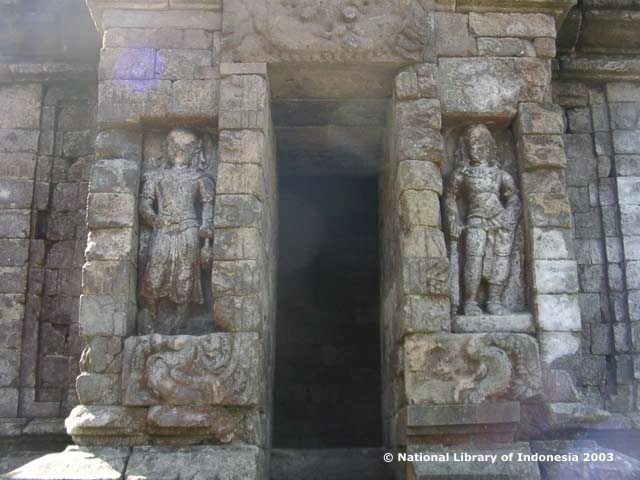 The third building in Gedong III Temple compound is situated in front of the main temple and the ancillary temple. This building, with its rectangular base, has a curved ‘limasan’ roof. On top of the roof, there are three small towers standing in a row. The entrance door opposite the main temple is simple without a frame. Above the door, there are vestigial traces of a decoration. Unlike Semar Temple in Dieng Temple compound, no niche is found on the temple walls. Experts believe that the temple was a storage, built to keep items inside, thus it serves the same functions as Semar Temple. 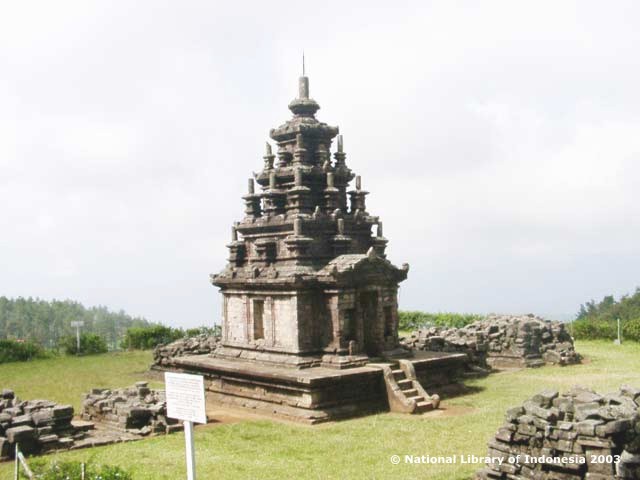 Candi Gedong IV consists of one complete building and a number of building remains scattered around the place. Experts have yet succeeded to explain the original shape of the destroyed buildings and their functions. However, some argue that the building remains were ancillary temples.

The only surviving building in the compound has the same design as the building in Gedong II Temple. The temple sits on a rectangular platform that rises 1 meter. The cornice on top of the platform makes a half-a-meter walkway wrapping the temple. 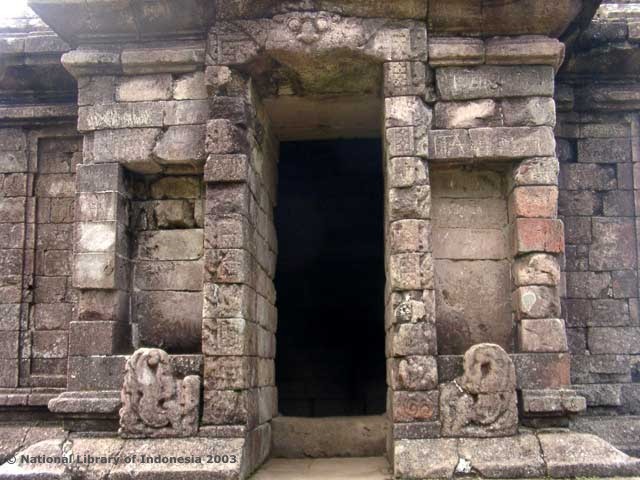 On the east side, opposite to the entrance into a chamber inside the temple, there are stairs leading to the walkway.

In front of the temple door, there is a corbelled roof that stretches out for one meter. Above the door, there is a sculpture of Kalamakara head without its lower jaw. There is an empty niche on each side of the door. Below the niche, there are unclear decorations as the original design is hardly recognizable.

On the outer walls of the west, north and south walls, there are niches as well. Inside one of the niche, there is a statue of a standing man. The statue is presently half-damaged. The roof of Gedong IV temple consists of three layers of diminishing size, with a pointing masonry on top of it. The design of temple roof resembles that of Gedong II Temple. Each side of the roof layers is decorated with etching. On each edge, there is a decoration of a round crown with a pointing top. 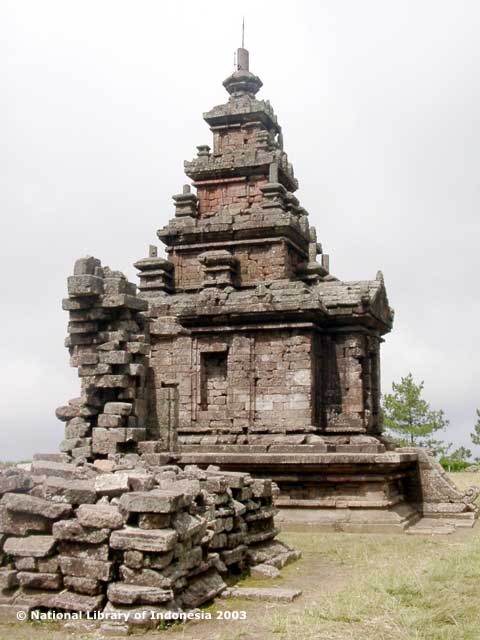 Candi Gedong V consists of a single intact structure and ruins of other structures, probably ancillary shrines, around it. The shape of this building resembles that of Gedong II and Gedong IV. 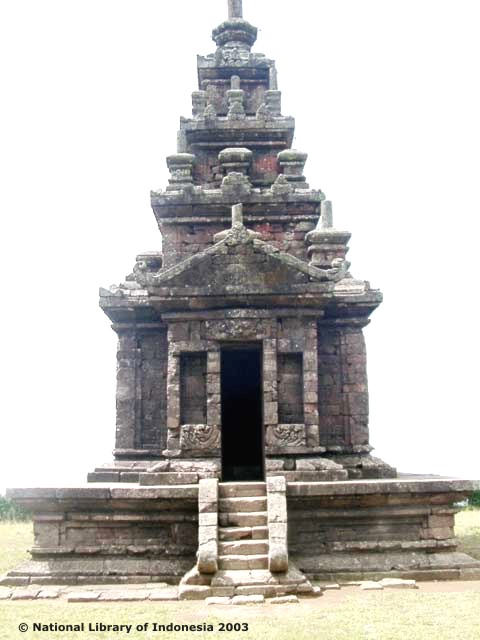 This temple’s body stands on a platform 1 m high laid out on a rectangular plan. The platform’s edge is 0.5 m wide, enough to form a walkway encircling the temple’s body.

Stairway to access the walkway is on the east, right in front of the gate to a small interior of the temple.

The temple’s entrance door also has a corbelled roof projecting 1 m from temple body. Above the door frame is embellished with sculptures of Kalamakara without its lower jaw in high-relief.

Each of the left and right side of the door has a niche to place statue, yet, no statues are found in them. Worn-out relief ornaments are found on the lower part of the niches.

The outer wall on the west, north, and south has niches with statues inside. One of the statues is Ganesha sitting cross-legged on a bench with the left hand on the thigh and right hand on the knee. The statue is in damaged condition.