Tanah Lot means “Land [in the] Sea” in the Balinese language. Located in Tabanan, about 20 kilometres (12 mil) North West of Denpasar, the temple sits on a large offshore rock which has been shaped continuously over the years by the ocean tide.

Tanah Lot is claimed to be the work of the 16th-century Dang Hyang Nirartha. During his travels along the south coast he saw the rock-island’s beautiful setting and decided to rest there. Some fishermen saw him, and bought him gifts. Nirartha then spent the night on the little island. Later he spoke to the fishermen and told them to build a shrine on the rock, for he felt it to be a holy place to worship the Balinese sea gods. The main deity of the temple is Dewa Baruna or Bhatara Segara, who is the sea god or sea power and these days, Nirartha is also worshipped here.

At the base of the rocky island, venomous sea snakes are believed to guard the temple from evil spirits and intruders. The temple is purportedly protected by a giant snake, which was created from Nirartha’s selendang (a type of sash) when he established the island.

Restoration. In 1980, the temple’s rock face was starting to crumble and the area around and inside the temple started to become dangerous. The Japanese government then provided a loan to the Indonesian government of Rp 800 billion (approximately US$130 million) to conserve the historic temple and other significant locations around Bali. As a result, over one third of Tanah Lot’s “rock” is actually cleverly disguised artificial rock created during the Japanese-funded and supervised renovation and stabilization program. 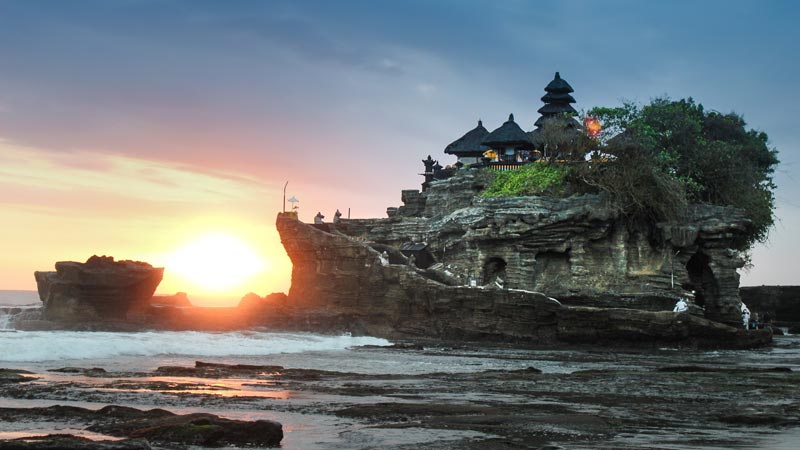 The history of the Tanah Lot Temple Bali Indonesia is based on legend, told in the 15th century, Bhagawan Dang Hyang Nirartha or known as Dang Hyang Dwijendra carried out a mission to spread Hinduism from Java to Bali. 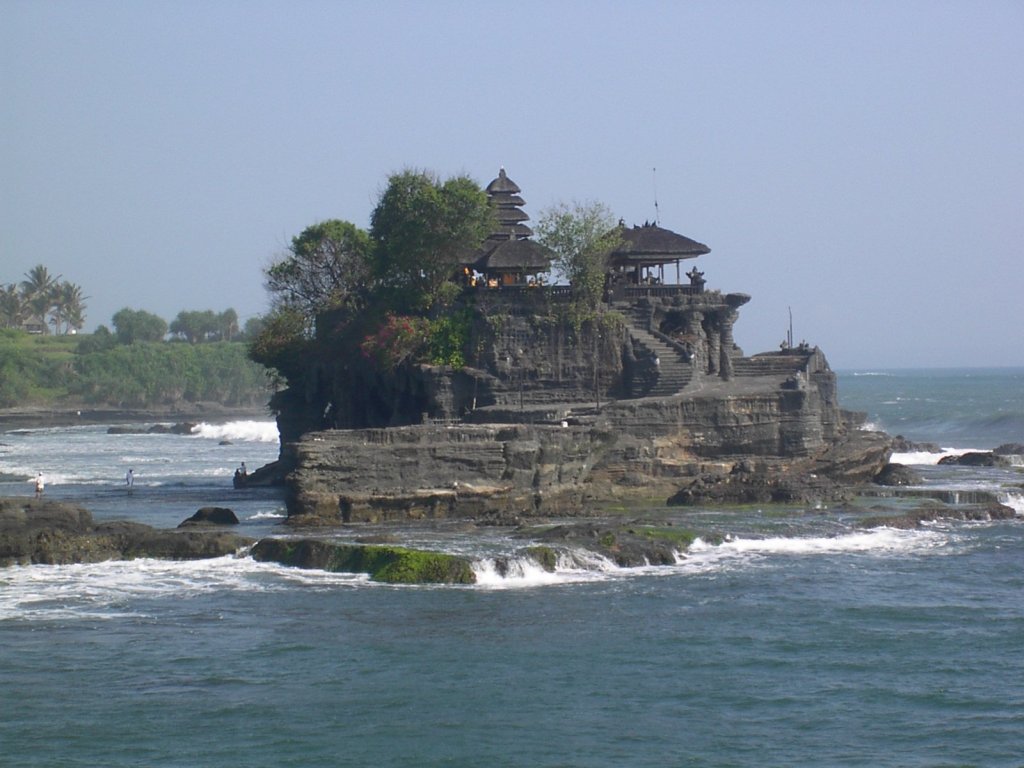 Dang Hyang Nirartha meditated on a rock that resembled the shape of a parrot that was originally on land. 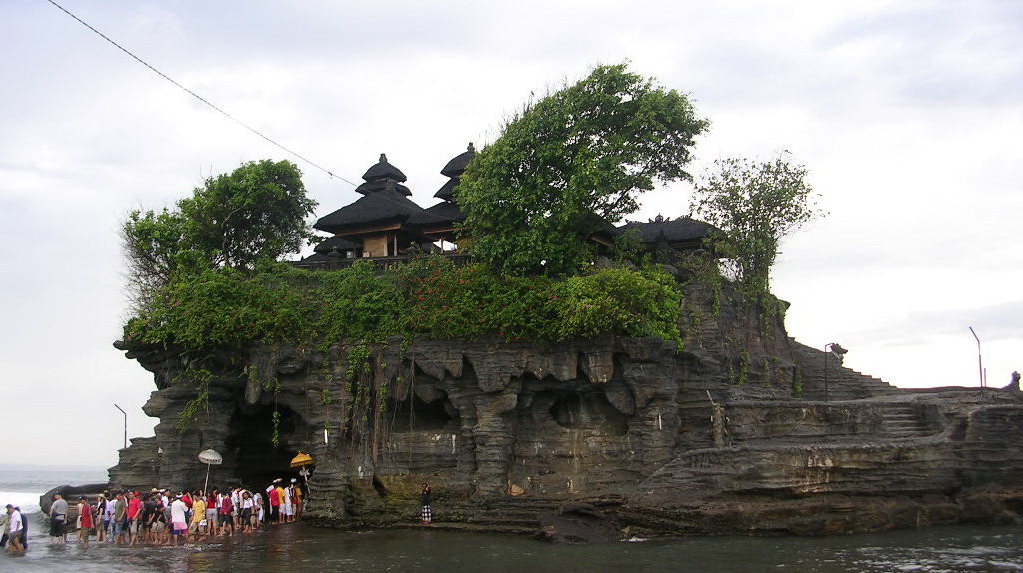 Since that incident, Bendesa Beraban Sakti recognized Dang Hyang Nirartha’s supernatural powers by becoming his follower to embrace Hinduism along with all local residents.

It is told in the history of Tanah Lot, before leaving Beraban village, Dang Hyang Nirartha gave a keris to the Beraban village. The keris has the power to eliminate all diseases that attack plants.

The keris is stored at Puri Kediri and a religious ceremony is made at Tanah Lot Temple every six months. Since this is routinely done by the villagers of Beraban, the welfare of the population has greatly increased with abundant agricultural harvests and they live with mutual respect. 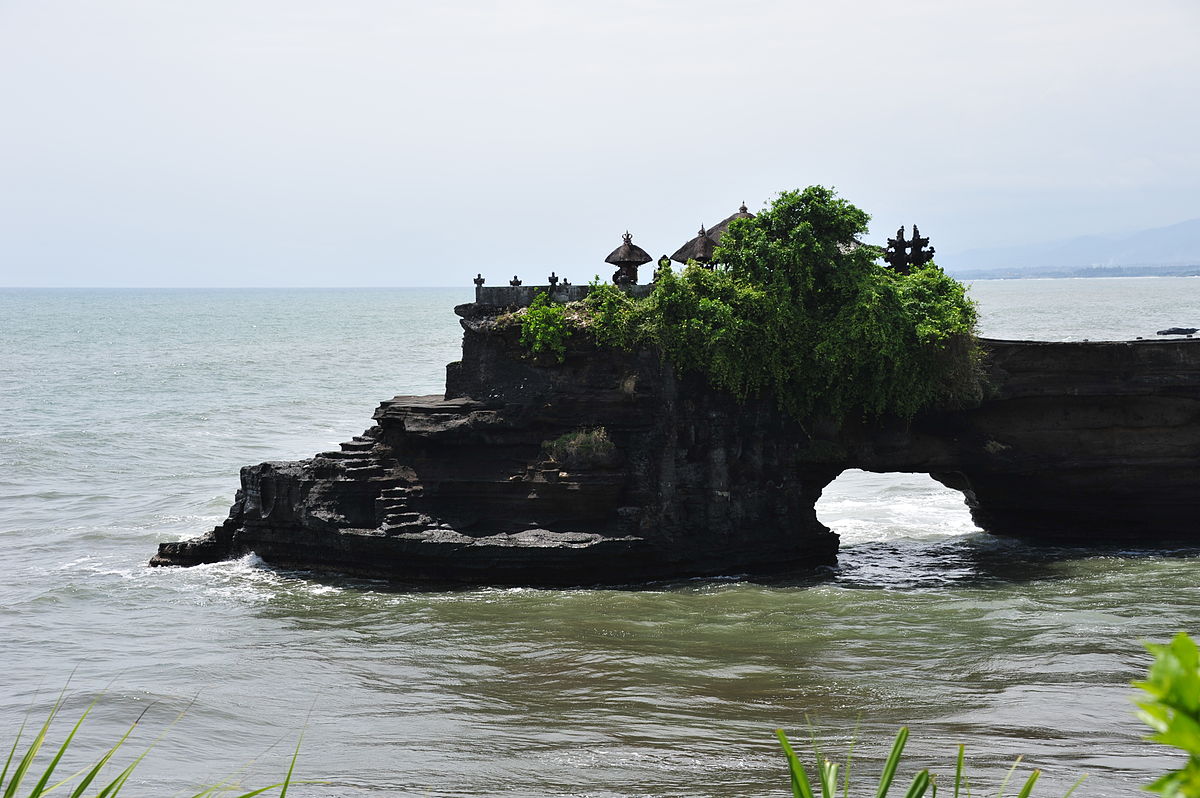 According to legend, this temple was built by a brahman who wandered from Java, namely Danghyang Nirartha, who managed to strengthen the Balinese people’s belief in Hinduism and built the Sad Kahyangan in the 16th century. At that time, the ruler of Tanah Lot named Bendesa Beraben was jealous of him because his followers began to go to follow Danghyang Nirartha.

He also turned his shawl into a temple guard snake. This snake is still around today and scientifically, this snake is a type of sea snake that has the characteristics of a flat tail like a fish, black and yellow and has a poison 3 times stronger than the cobra snake. Finally, it was mentioned that Bendesa Beraben became a follower of Danghyang Nirartha. 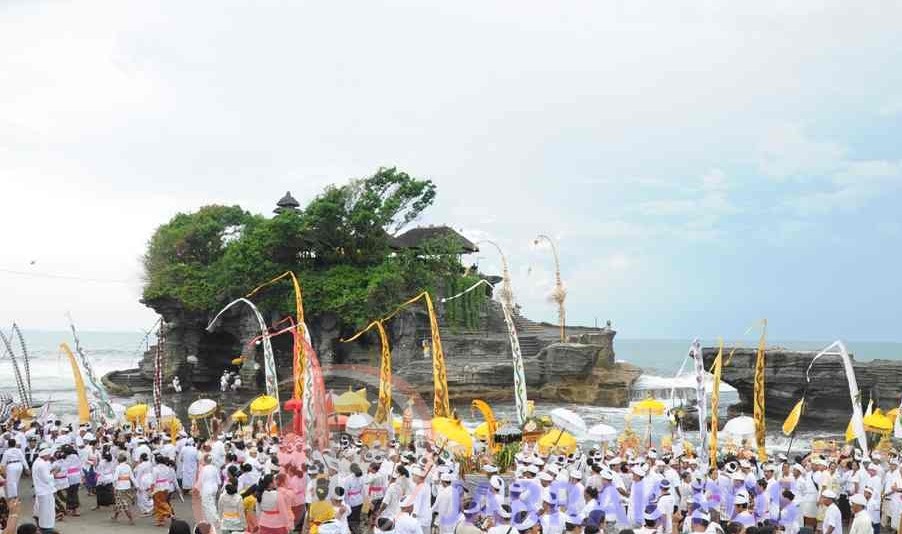 What is interesting about the Tanah Lot temple in Bali so that many Indonesian tourists visit while on vacation to the island of Bali? The answer is twofold, namely uniqueness and beauty.

The uniqueness of the Tanah Lot tourist attraction lies in the location of two temples which are above a black rock cliff on the coast. The two temples face the ocean off the Indian Ocean.

One temple is built on a very large black rock and is on the left side of the beach. This temple is better known as the Tanah Lot temple. At high tide, the sea water will cover the beach area and make the Tanah Lot temple location appear to be in the middle of the ocean. The moment of the high tide also looks like a ship made of large black stones floating on the surface of the sea water. 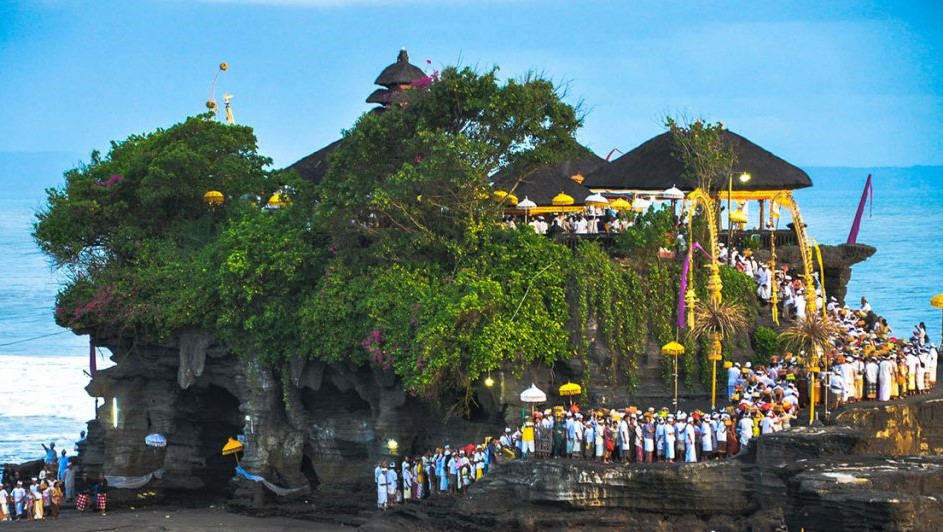 The beauty of the Tanah Lot temple attractions is in the combination of natural beauty combined with cultural beauty. When you have a vacation to Tanah Lot on the island of Bali, you will see the roar of the waves crashing against the rock cliffs. Towards sunset, little by little the color of the sky changes dramatically filled with various colors.

When the sun is no longer visible on the horizon, is the time for the most beautiful sunset views in Tanah Lot. Because in addition to seeing the sunset, visitors will also see the silhouette of the Tanah Lot temple. The beauty of the moment when the sun sets in Tanah Lot is what always attracts tourist visits to Tanah Lot Bali.

Every temple in Bali on a certain day will hold a big ceremony, including at the Tanah Lot Beraban temple. Religious ceremonies at Tanah Lot Temple are carried out over a period of 210 days using the Balinese calendar, or around 6 AD calendar months.

The purpose of praying at the location of the Beji Kaler holy spring is so that Hindus, before entering the main temple area, get holy water which will be used to cleanse their body and soul.