Uluwatu Temple (Balinese: Pura (Luhur) Uluwatu) is a Balinese Hindu sea temple (Pura Segara) located in Uluwatu (South Kuta, Badung). The temple is regarded as one of the sad kahyangan and is dedicated to Sang Hyang Widhi Wasa in his manifestation as Rudra.
more..

The temple (pura in Balinese) is built at the edge (ulu) of a 70-meter-high (230 ft) cliff or rock (watu) projecting into the sea. In folklore, this rock is said to be part of Dewi Danu’s petrified barque.

Though a small temple was claimed to have existed earlier, the structure was significantly expanded by a Javanese sage, Empu Kuturan in the 11th Century. Another sage from East Java, Dang Hyang Nirartha is credited for constructing the padmasana shrines and it is said that he attained moksha here, an event called ngeluhur (“to go up”) locally. This has resulted in the temple’s epithet Luhur. 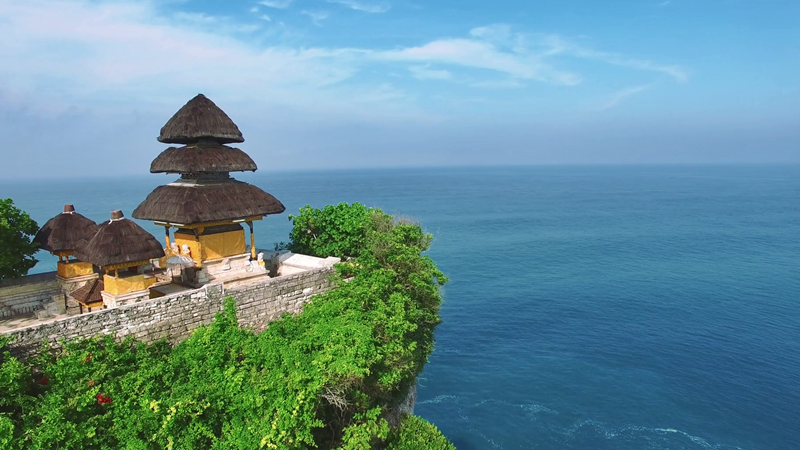 Uluwatu Temple is located in Pecatu Village, Kuta Sub-district, Badung District, Bali. The temple is 30 kilometers to the south of Denpasar. Uluwatu Temple, also called Luwur Temple, is one of the six Sad Kahyangan Temples, the main spiritual pillars in Bali Island. 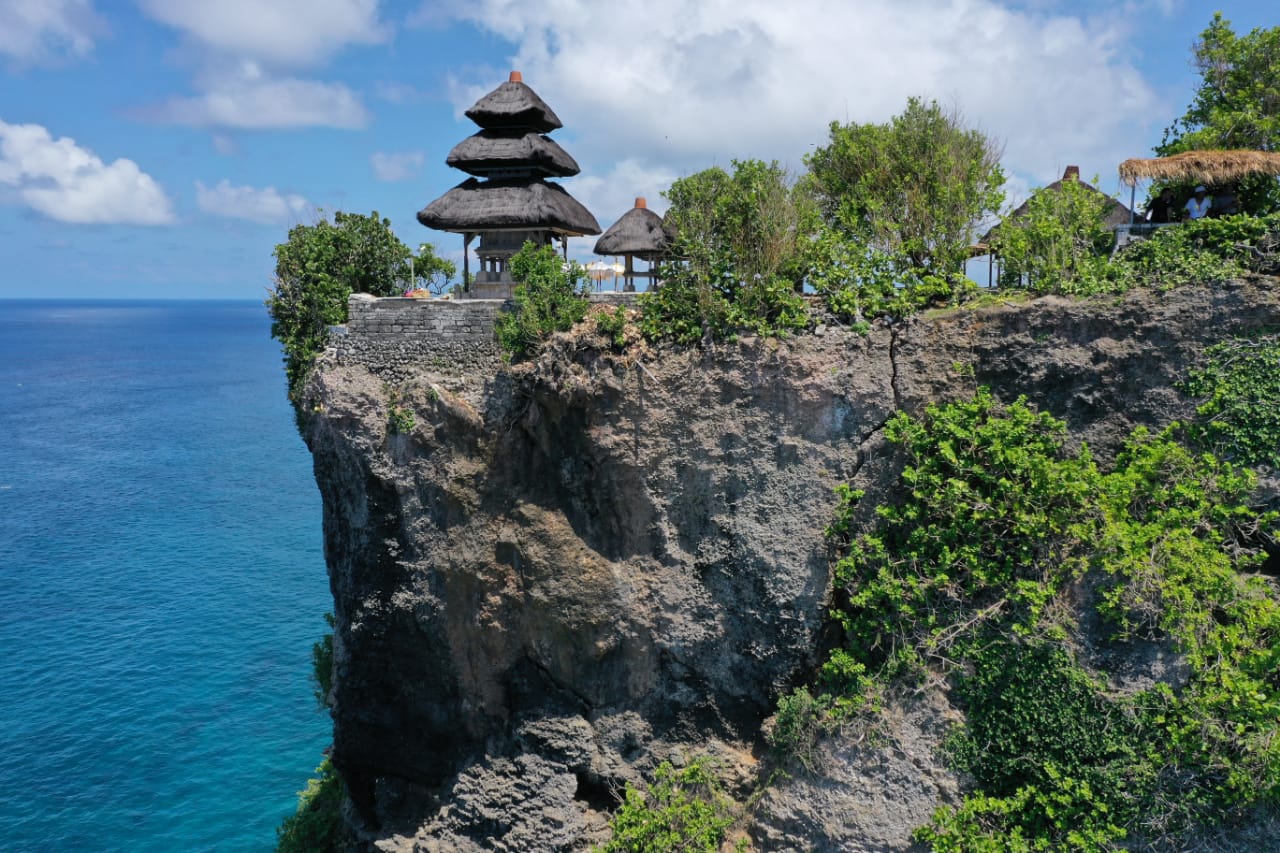 Dang Hyang Nirartha came to Bali in 1546 AD, during the reign of Dalem Waturenggong. The monk built Uluwatu Temple on Pecatu Hill. After completing a spiritual journey around Bali, the monk went back to Uluwatu Temple and died there. He moksa (died and his body vanished), leaving the Marcapada (worldly life) and entering Swargaloka (heaven). 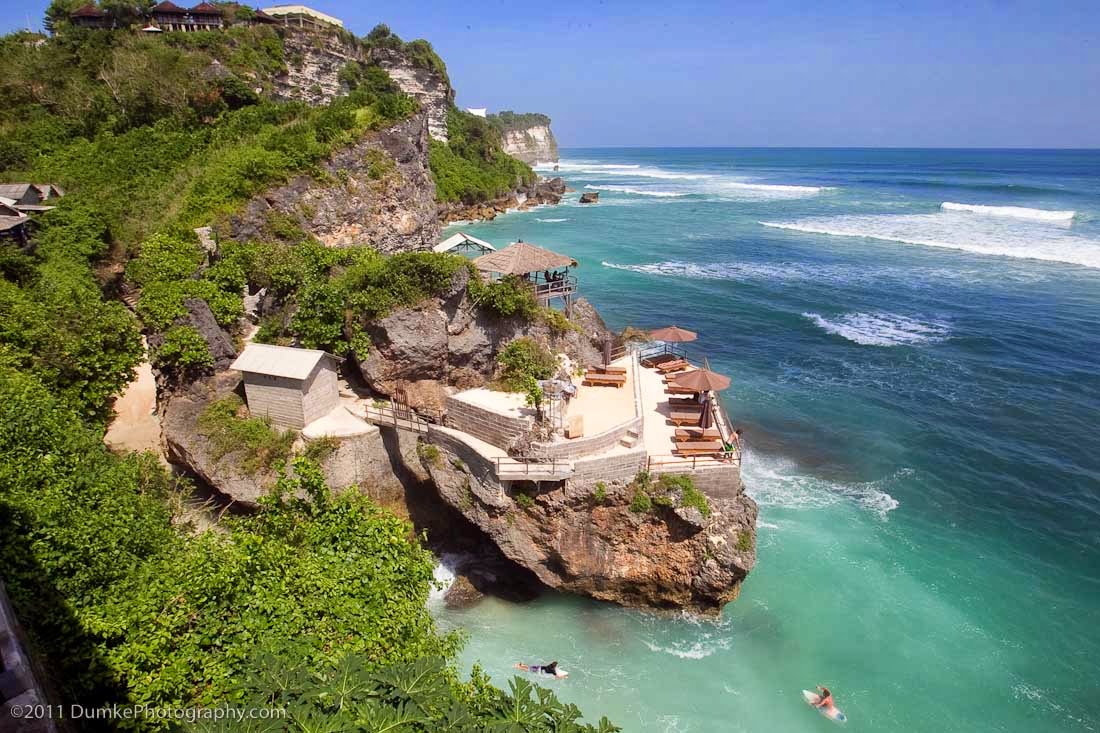 The Piodalan or ceremony commemorating the temple’s anniversary is held on Anggara Kasih day, in wuku Medangsia in Caka calendar. Usually the ceremony lasts for three days thronged by of thousands of Hindus. 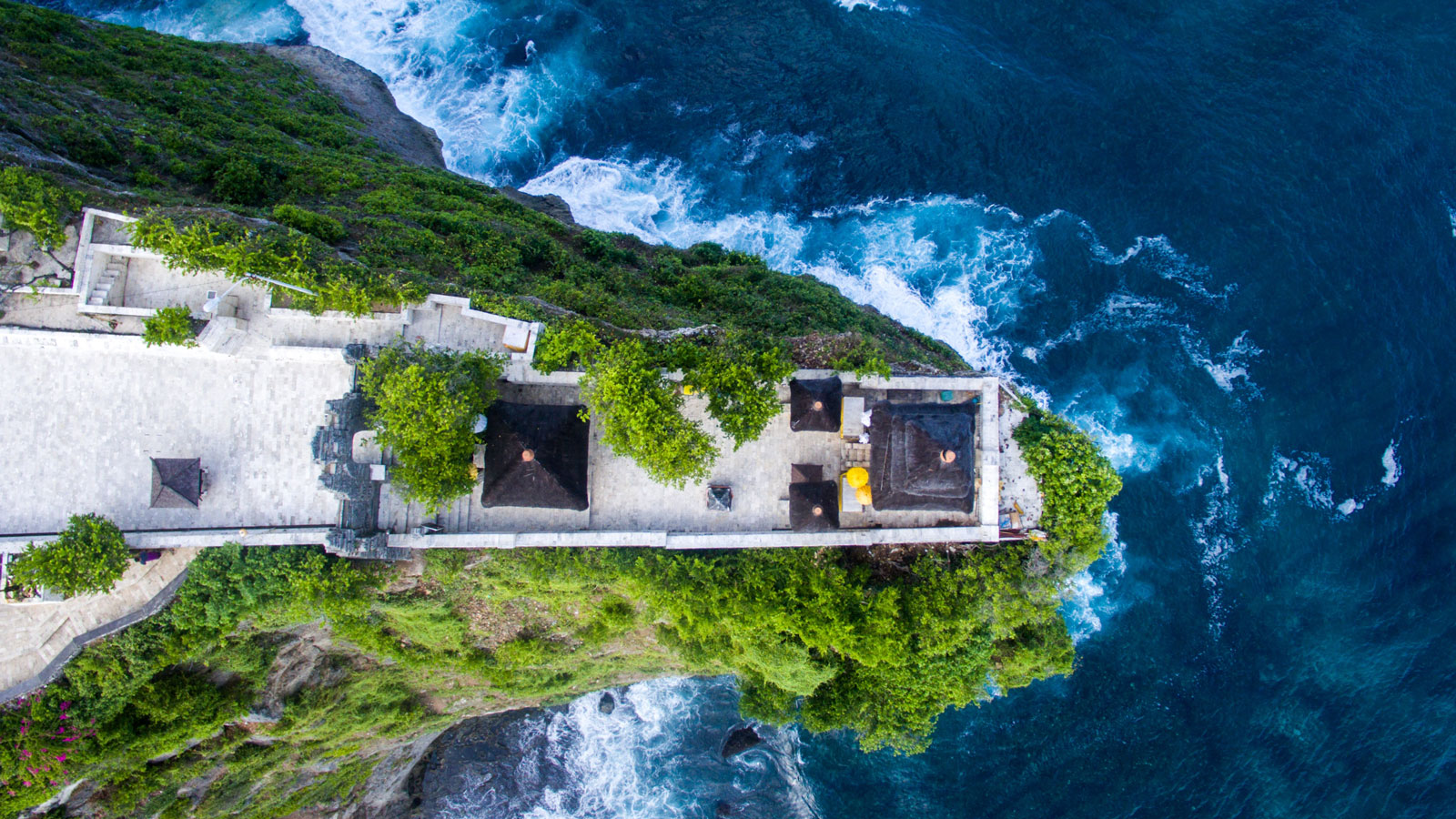 Uluwatu Temple sits on a 70-meter-high cliff protruding above Indonesian Ocean. Because of its unique location, visitors to the temple have to take a long stone stairway to reach it. The temple heads east, unlike other Balinese temples which face west or south.

There are hundreds of monkeys roaming along the path outside the temple. Although the monkeys look tame, visitors find them a nuisance as they often grab food off a visitor’s hand and snatch visitors’ belongings. There are two doors at the end of the path, the north door and the south one, through which visitors enter the temple complex. 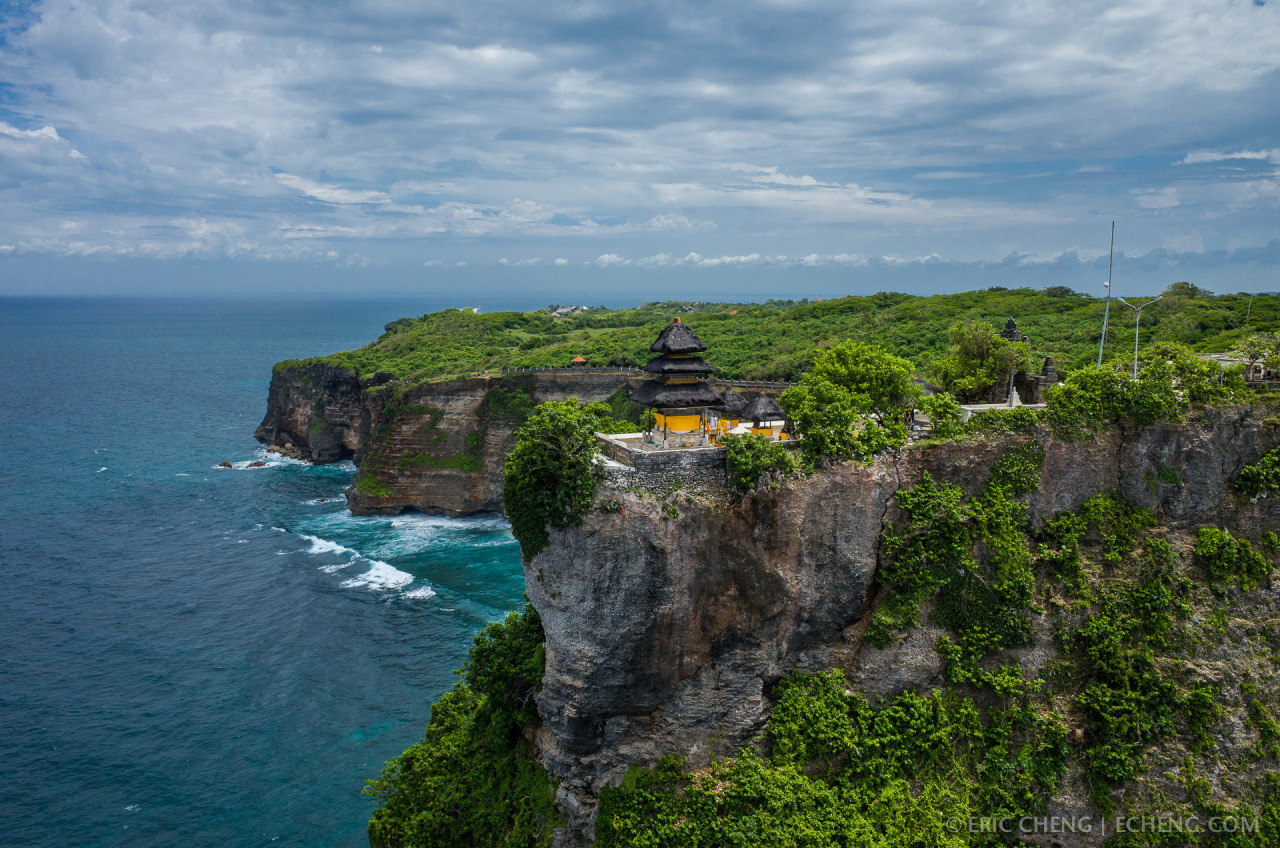 The entrance doors take the shape of stone Bentar gates. Standing across from each gate, there are two statues of elephant-headed men. The front part of the gate is decorated with fine relief sculpture picturing leaves and flowery patterns. 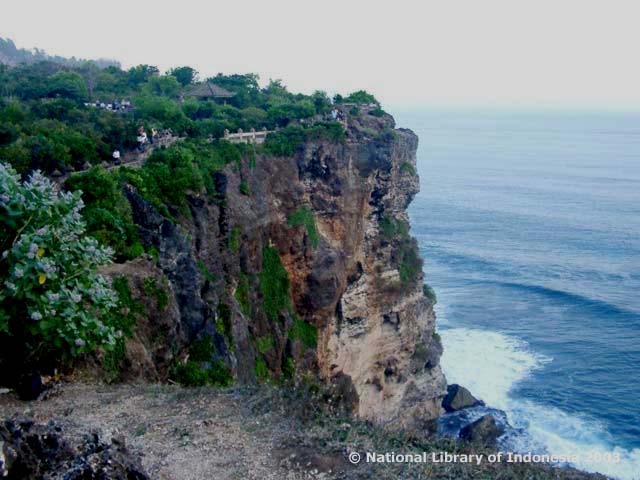 Behind the gate, there are stone steps that lead to the inner court. Along the steps, trees are grown to provide shade.

The inner court is an open space paved with stone floor. There is a wooden building near the north gate. To the west, across from the entrance path, there is a Paduraksa Gate that opens the path into the next inner court. 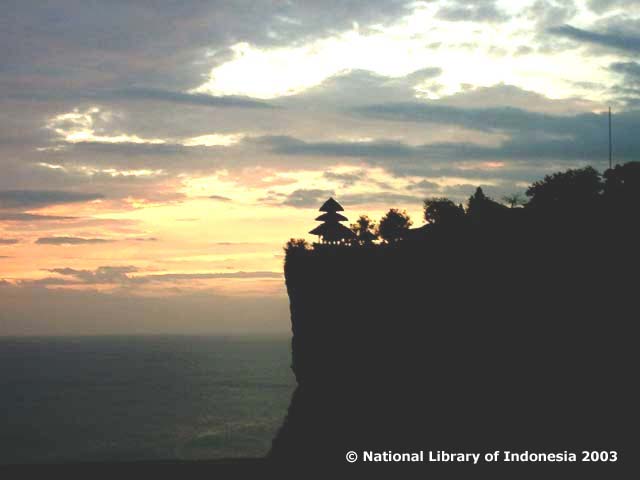 Unlike the ones found outside, this stone gate is completed with roof. The door is an arch framed with an arrangement of stones. 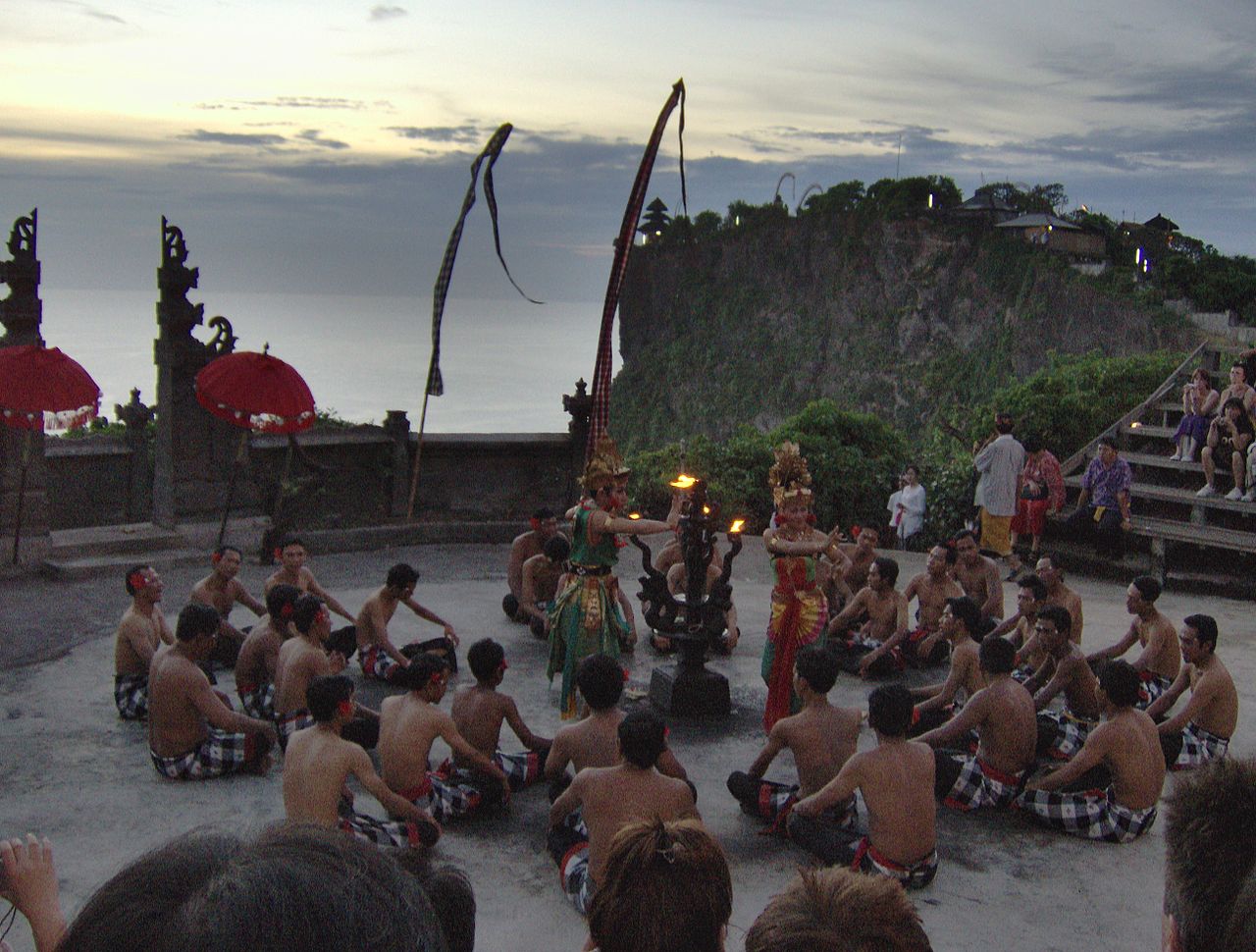 There is a sculpture of a giant head above the frame. The top of the gate looks like a crown and it is decorated with relief sculpture. The gaps between the gate and the walls are filled with a surface full of relief sculpture.

There is a small rectangular court to the south that stretches out above the sea. There is a wooden construction at the end of the court that seems to be a place where people can sit and watch the ocean. Uluwatu Temple has undergone several restorations. In 1999, a lightning struck the temple and caused fire.