Sukuh Temple is a Hindu Hindu temple complex which is administratively located in the area of Berjo Village, Ngargoyoso District, Karanganyar Regency, Central Java. This temple is considered controversial because of its unusual shape and because of the explicit depiction of human genitalia on some of its figures.

The site of the Sukuh temple was first reported during British rule in Java in 1815 by Johnson, Resident of Surakarta. Johnson at that time was assigned by Thomas Stanford Raffles to collect data to write his book The History of Java. After the reign of Great Britain passed, in 1842, Van der Vlis, a Dutch archaeologist, conducted research. The first restoration began in 1928.

The location of Sukuh temple is located on the slopes of the foot of Mount Lawu at an altitude of approximately 1,186 meters above sea level at coordinates 07o37, 38 ’85’ ‘south latitude and 111o07 ,. 52’65 ‘West Longitude. This temple is located in Dukuh Sukuh, Berjo Village, Ngargoyoso District, Karanganyar Regency, Central Java. This temple is approximately 20 kilometers from Karanganyar City and 36 kilometers from Surakarta. 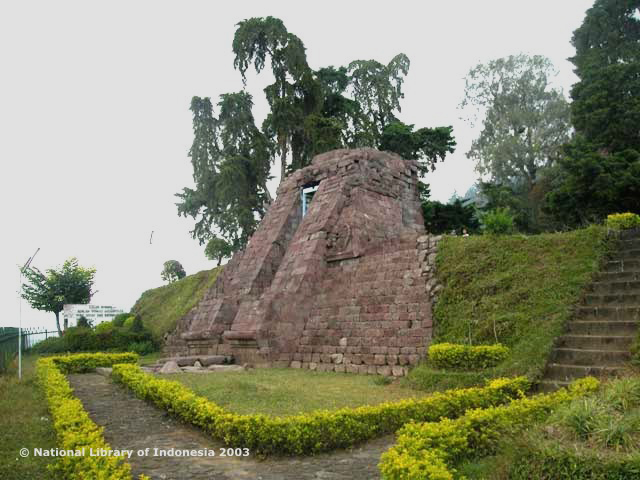 The Sukuh temple building gives the visitors a striking simplicity. The impression obtained from this temple is completely different from that obtained from other large temples in Central Java, namely Borobudur Temple and Prambanan Temple. The shape of the Sukuh temple building tends to be similar to Mayan cultural heritage in Mexico or Inca cultural heritage in Peru. This structure also reminds visitors of the pyramids of Egypt. 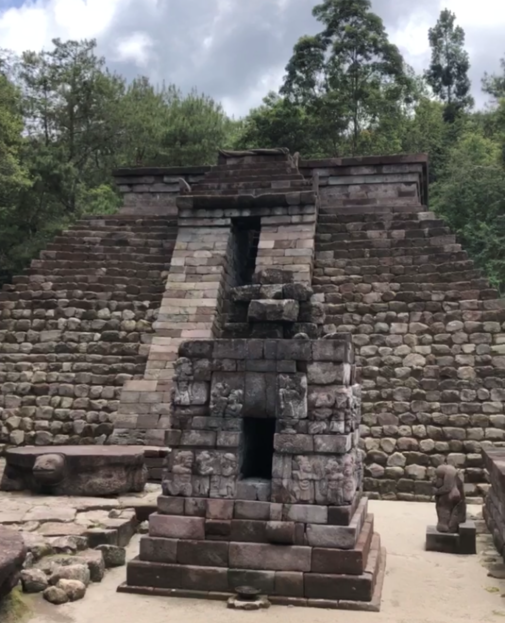 This impression of simplicity caught the attention of the renowned Dutch archaeologist, W.F. Stutterheim, in 1930. He tried to explain it by giving three arguments. First, it is possible that the sculptor of the Sukuh temple was not a bricklayer but a carpenter from the village and not from the court. Second, the temple was made rather hastily so that it was less tidy. Third, the political situation at that time with the collapse of Majapahit, it was not possible to build a large and magnificent temple.

The visitors who enter the main door and then enter the largest archway will see a distinctive architectural form that is not arranged perpendicularly but rather tilted, in the form of a trapezoid with a roof on it.

The stones in this temple are slightly reddish in color, because the stones used are of the andesite type.


The first terrace of the temple

On the first terrace there is a main gate. At this gate there is a memet sengkala in Javanese which reads gapura blind aban wong (“giant gapura devours humans”), each of which has meanings 9, 5, 3, and 1. If reversed, the year 1359 (Saka) is obtained ( 1437 AD). This year’s figure is often regarded as the year the temple was founded, although it is more likely the year the gate was built. 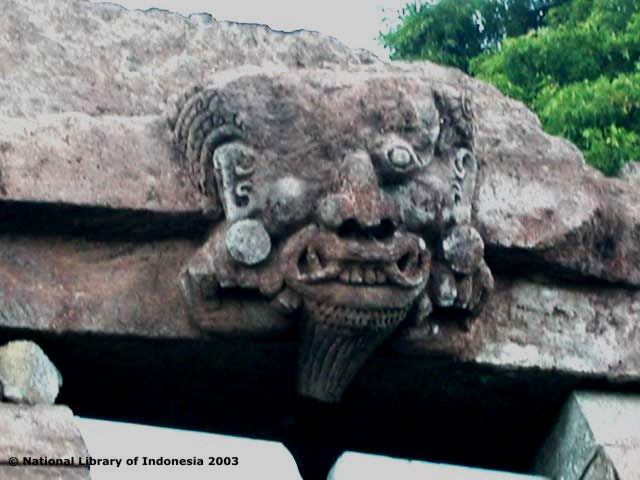 On the other side there is also a relief of a memet sengkala in the form of a turbaned elephant biting a snake’s tail. This is thought to symbolize the sound of the blind gate anahut tail (“giant gapura biting the tail”), which can also be interpreted as 1359 Saka.


The second terrace of the temple

The gate on the second terrace was damaged. On the right and left of the gate there are statues of doormen or dwarapala which are usually there, but they are in a state of disrepair and its shape is no longer clear. The gate has no roof and there are not many statues on this terrace. At this gate there is a candrasangkala in Javanese which reads elephant wiku anahut tail, which means “Priest’s elephant biting the tail” in Indonesian. These words have meanings 8, 7, 3, and 1. If reversed, it is found in 1378 Saka or 1456 AD. 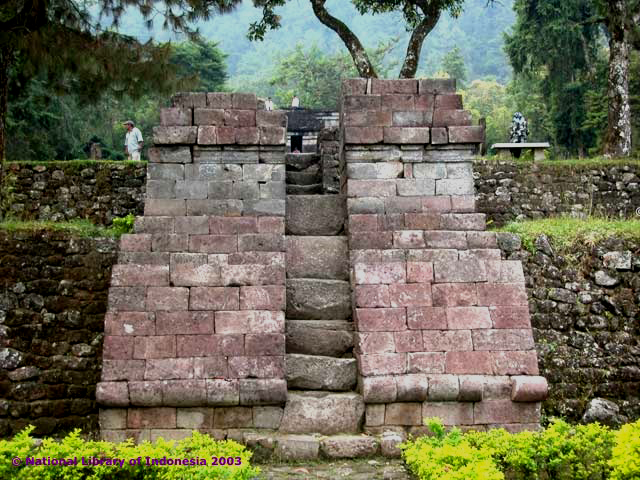 The third terrace of the temple

On this third terrace, there is a large courtyard with the main temple and several panels with reliefs on the left and statues on the right.

Right above the main temple in the middle is a square which seems to be a place to put offerings. Here there are traces of incense, incense and incense that were burned, so that it is seen that they are often used for praying. 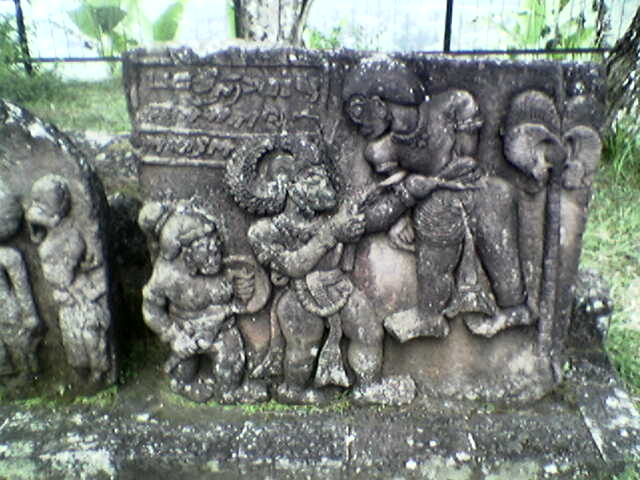 Then on the left side of the main temple, there are a series of panels with reliefs that tell the main mythology of the Sukuh temple, Kidung Sudamala. The order of the reliefs is as follows.

The first panel.
On the left depicts the Sahadeva or Sadewa, the twin brother of Nakula and the youngest of the Five Pandavas. Both are the sons of Prabu Pandu from Dewi Madrim, his second wife. Madrim died when Nakula and Sadewa were young and both were taken care of by Dewi Kunti, Pandu’s main wife. Dewi Kunti then took care of them with their three children from Pandu: Yudhistira, Bima and Arjuna. This relief depicts Sadewa squatting and being followed by a clerk or companion. Facing Sadewa, a female character, Dewi Durga, is also accompanied by a clerk. 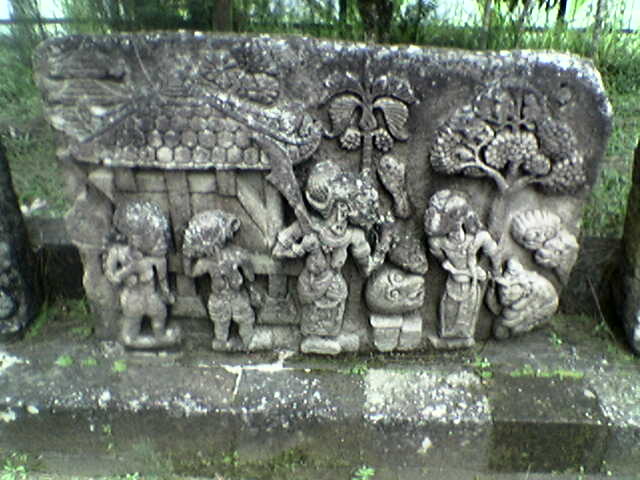 Second panel.
In this second relief is carved a picture of Goddess Durga, who has turned into a r Relaxation (female giant) with a terrible face. Two monstrous giants; Kalantaka and Kalañjaya accompanied Batari Durga who was angry and threatened to kill Sadewa. Kalantaka and Kalañjaya are incarnations of angels who are cursed for not respecting Gods so that they have to be reborn as giants with ugly faces. Sadewa was tied to a tree and threatened with death with a sword for not wanting to free Durga. 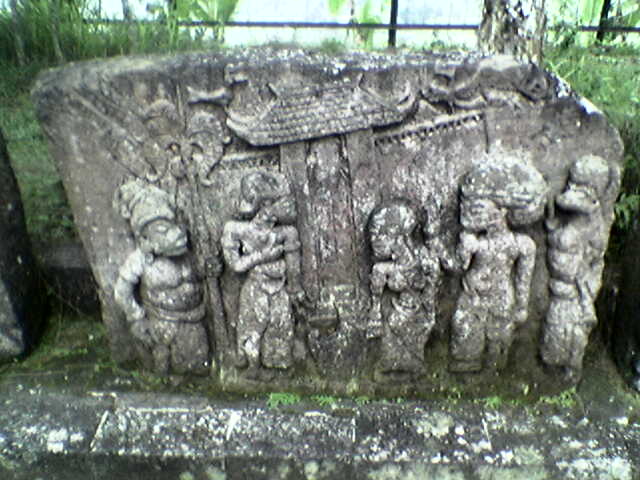 Behind him, you can see, among others, Semar. You can see the form of a hovering ghost and on the right side of the tree there are two owls. This gruesome painting seems to be a painting in the forest of Setra Gandamayu (Gandamayit) the exile of the gods who were expelled from heaven for transgressions.

Third panel
In this section, it is described how Sadewa and his clerk, Semar, faced a blind hermit named Tambrapetra and his daughter Ni Padapa at Prangalas hermitage. Sadewa will cure him of his blindness. 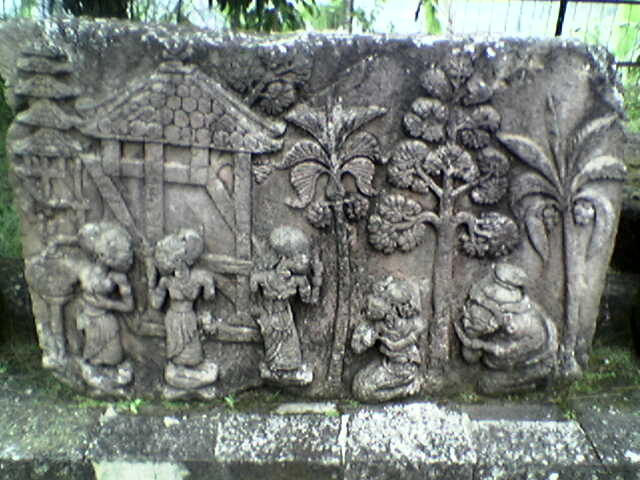 The fourth panel
The scene in a beautiful garden shows Sadewa chatting with Tambrapetra and her daughter Ni Padapa and a clerk at Prangalas hermitage. Tambrapetra thanked him and gave his daughter to Sadewa to marry him. 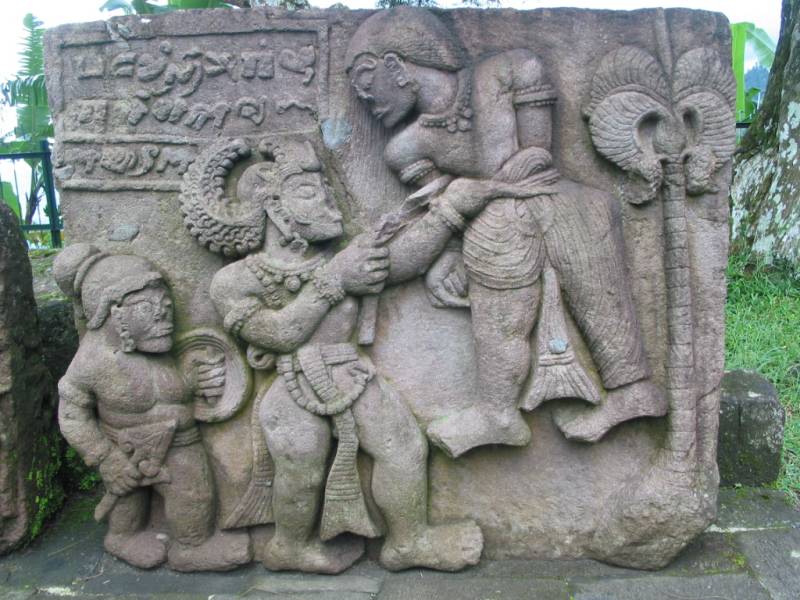 The fifth panel
This panel depicts the scene of a power struggle between Bima and the two giants Kalantaka and Kalañjaya. Relief only showed one of the two giants. Bima with his extraordinary strength was lifting the giant to be killed with his pañcanakan hooves.

Statues of the Garuda

On the right, there are two figures of Garuda statues which are part of the story of the search for tirta amerta (water of life) found in Adiparwa, the first book in the Mahabharata. On the tail of the Garuda there is an inscription (inscription) that reads 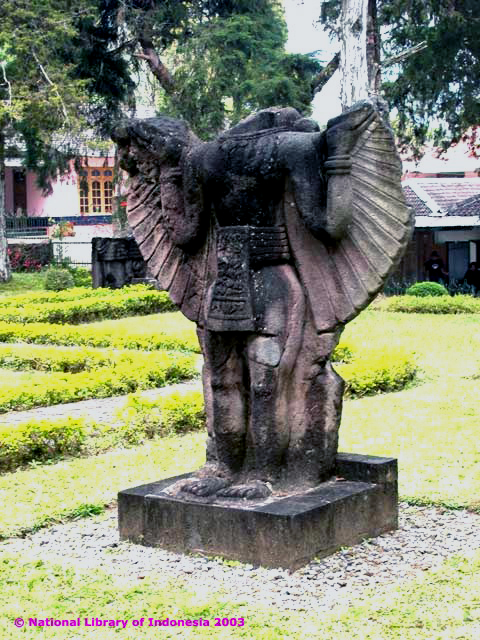 according to reading Darmosoetopo (1984). In essence, this inscription is a suryasengkala which represents the year 1363 Saka (1441 AD).

Then as part of the story of the search for amerta, in this section there are also three turtle statues that symbolize the earth and the incarnation of Lord Vishnu. The shape of this turtle resembles a table and is possibly designed as a place to put offerings. A pyramid whose peak is cut off symbolizes Mount Mandaragiri, whose peak is taken to stir the seas in search of Tirta Amerta

Several other buildings and statues

Apart from the main temple and statues of turtles, garuda and reliefs, there are still several animal statues in the form of wild boar (wild boar) and saddled elephants. In ancient times knights and aristocrats rode on elephants.

Then there is also a building with a horseshoe relief with two human figures in it, on the left and right facing each other. Some argue that this relief symbolizes a woman’s womb and the figure on the left symbolizes evil and the right figure symbolizes virtue. However, this is not so clear.

Then there is a small building in front of the main temple called the pewara temple. In the middle, this building has a hole and there is a small statue without a head. This statue is still sacred by some circles because it is often given offerings.