Muaro Jambi (Indonesian: Candi Muaro Jambi) is a Buddhist temple complex, in Muaro Jambi Regency, Jambi province, Sumatra, Indonesia. It is situated 26 kilometers east from the city of Jambi. The temple complex was built by the Melayu Kingdom, with its surviving temples and other archaeological remains estimated to date from the 7th to 13th century CE. The archaeological site includes eight excavated temple sanctuaries and covers about 12 square kilometers, stretches 7.5 kilometers along the Batang Hari River, 80 menapos or mounds of temple ruins, are not yet restored. It is one of the largest and best-preserved ancient temple complexes in South-East Asia. It was suggested that Muaro Jambi Temple compound might be the initial location of Srivijaya kingdom. This is mainly because, Muaro Jambi has far richer temple concentration—in contrast to the scarcity of archaeological sites in South Sumatra.
more..

The Muara Takus temple site is surrounded by a wall measuring 74 x 74 meters, made of white stone with a wall height of ± 80 cm, outside the area there is also an earthen wall measuring 1.5 x 1.5 kilometers, surrounding this complex to the edge of the Kampar River. Right. Inside this complex there are several temple buildings called the eldest/old temple, the youngest temple, the Mahligai Stupa and Palangka.

Archaeological experts have not been able to determine with certainty when this temple site was founded. Some say the 4th century, some say the 7th century, 9th century even in the 11th century. However, this temple is considered to have existed in the golden age of Srivijaya, so that some historians consider this area to be one of the administrative centers of the Sriwijaya kingdom.

In 2009 Muara Takus Temple was nominated to become a UNESCO World Heritage Site. 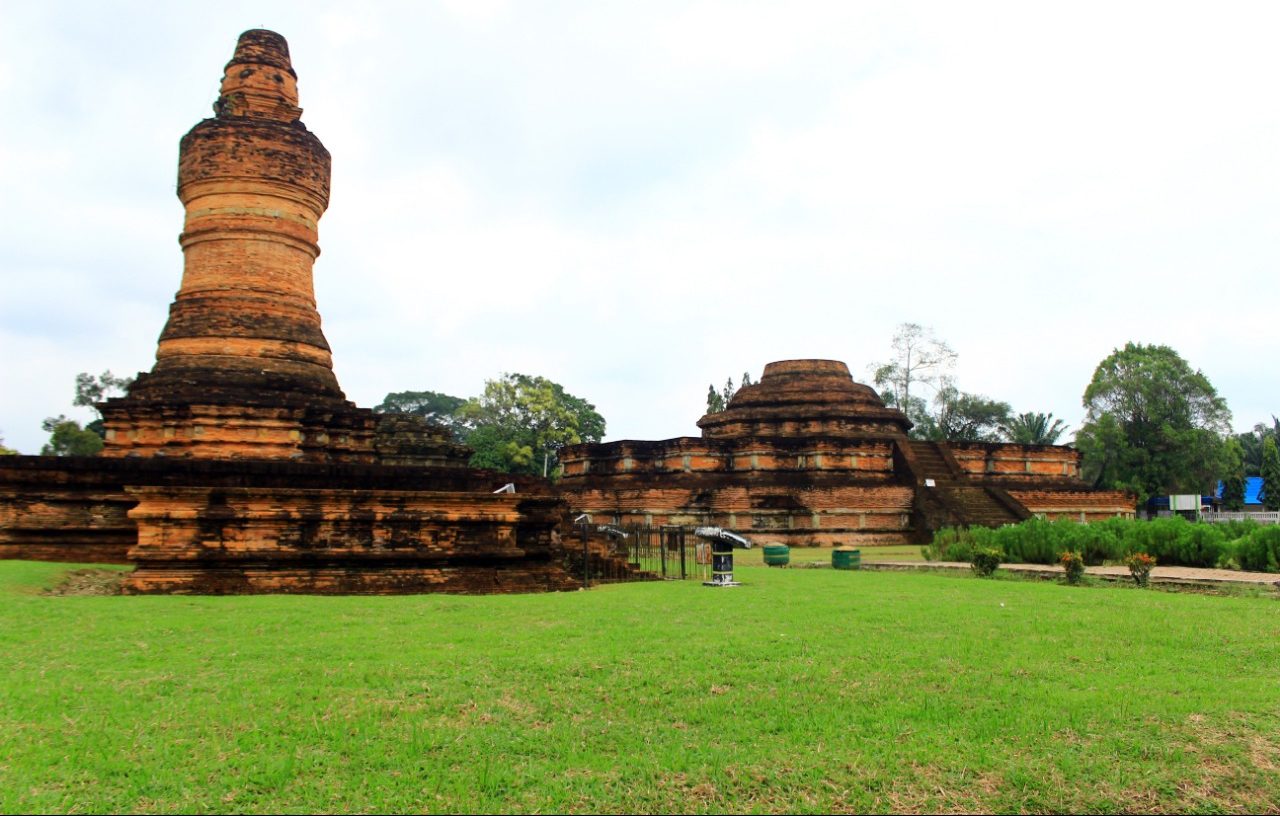 Candi Muara Takus was constructed by the maritime-based Sriwijaya Empire in the eleventh century. The architecture and design of the temples clearly indicates that they are of Mahayana Buddhist origin. It has been suggested by Schnitger that the major temples at Muara Takus may have undergone major renovations in the twelfth century. It is thought that the area was used as both a religious and trade centre by Srivijaya.

The site was abandoned for many centuries before it was rediscovered by Cornet De Groot in 1860. The site was explored and surveyed by W.P Groenveld in 1880 and excavations have been conducted periodically since. The research on the Muara Takus archaeological site was carried out in 1983 and it resulted in mapping of the ancient embankment remnants, the Mahligai Temple compound, and other ancient structures. The site is now protected as a national monument. 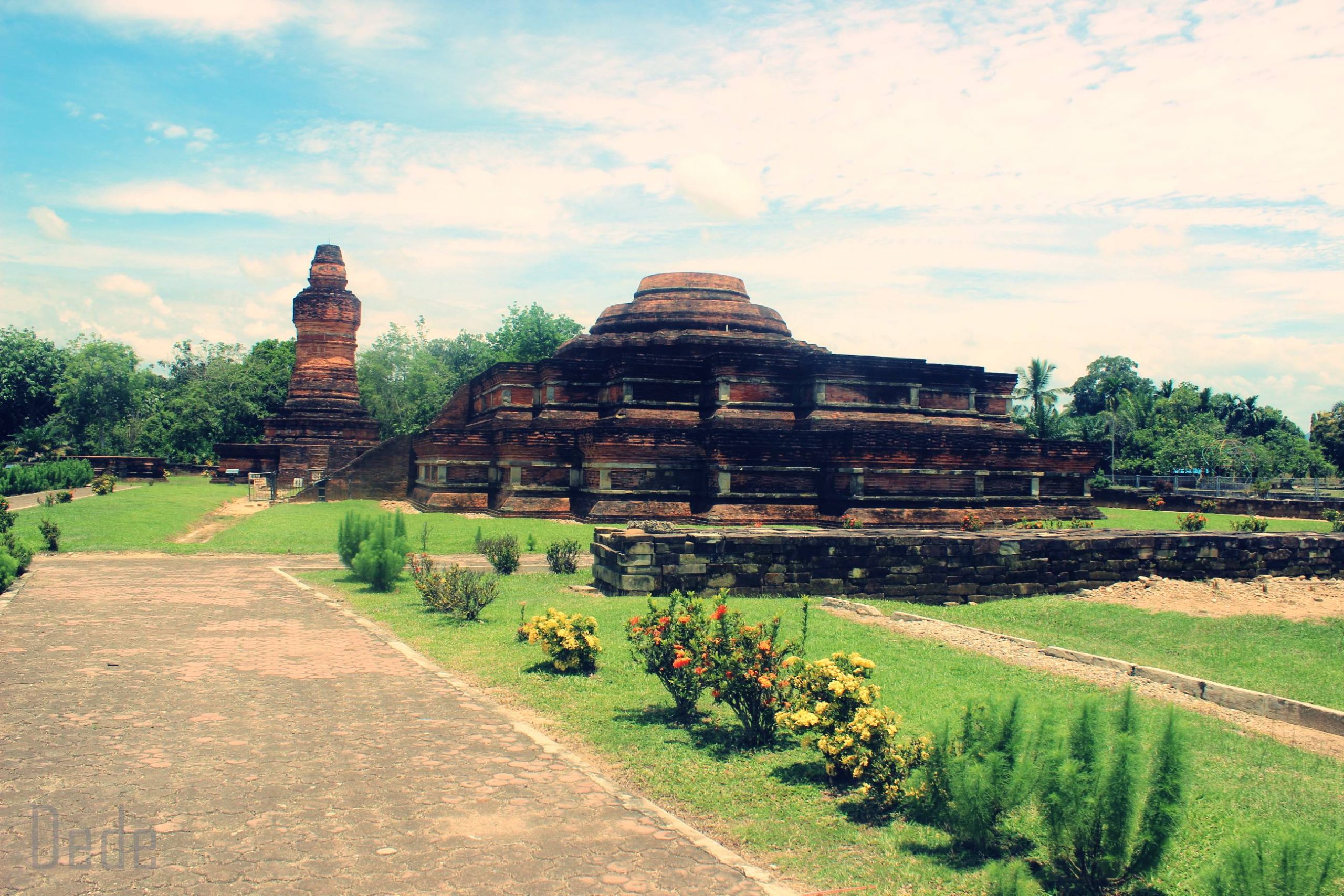 The temple complex of Candi Muara Takus is surrounded by a 1 metre tall stone perimeter wall that measures 74 x 74 metres. The outer wall is penetrated by a gateway on the northern side. Within the walls are the remains of four substantial Buddhist temples (candi).

The most unusual of these is Candi Mahligai. This lotus-shaped Buddhist stupa is unique in Indonesia though there are numerous similar ancient structures in Thailand and Myanmar. This structure is founded on an octagonal base and reaches a height of 14.30 metres. The uppermost level of the stupa is decorated with lion figures that are barely discernible from below. 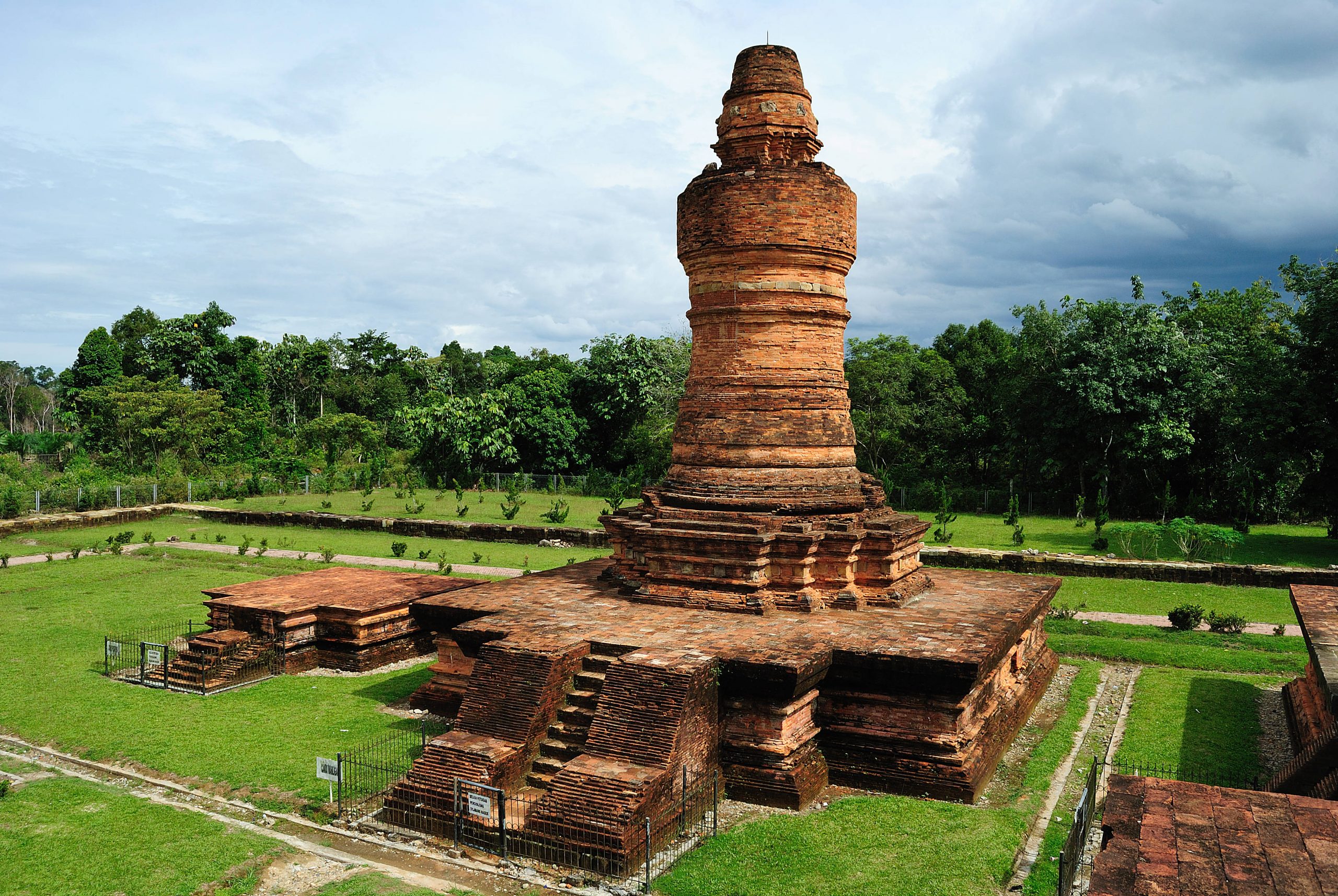 On the east side of Candi Mahligai is the base of Candi Palangka. It is constructed from red stone and now only reaches a height of 1.45 metres. It was reportedly much taller at the time of the earliest colonial expeditions to the site but the upper terraces have long since collapsed.

A third structure within the complex is Candi Bungsu. The most striking thing about this temple is that it was built from two very different kinds of stone. One part is built from red stone and the other section from sandstone. This temple now reaches a height of 6.20 metres.

The largest structure at Candi Muara Takus is Candi Tua. Its base measures 32.80 metres x 21.80 metres and it reaches a height of 8.50 metres. This temple is terraced and it bears some resemblance in its design to the much larger stupa, Candi Borobudur, in Java. Like all the temples at Candi Muara Takus, Candi Tua features only minimal decoration. The most notable decorative feature are the seated lion figures on the upper terraces.