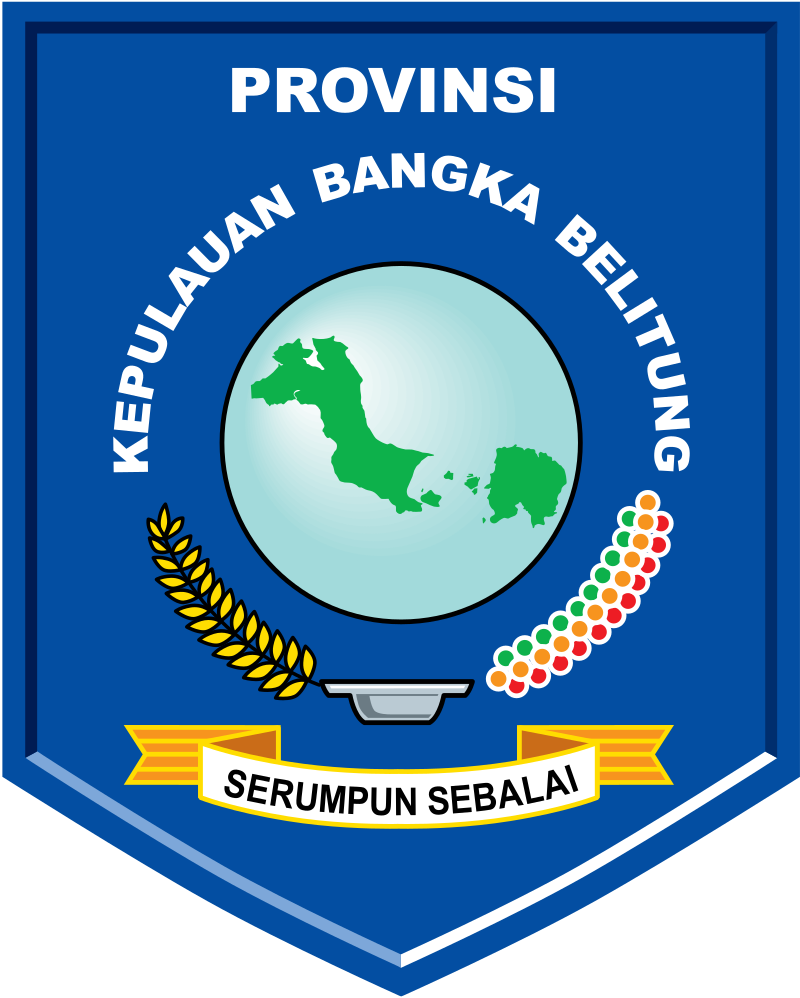 The Bangka Belitung Islands (Indonesian: Kepulauan Bangka Belitung) is a province of Indonesia. Situated off the southeastern coast of Sumatra, the province comprises two main landmasses—Bangka and Belitung—and numerous smaller islands. Bangka Belitung is bordered by the Bangka Strait to the west, the Natuna Sea to the north, the Java Sea is to the south and the Karimata Strait to the east. The province’s capital and largest city is Pangkal Pinang. Bangka Belitung covers an area of 16,424.06 km2 (6,341.37 sq mi) and has a population of 1,455,678 according to the 2020 census.
more..
Bangka Belitung has an equatorial climate with tropical rainforests, which however is disappearing due to deforestation. Mount Maras, located on the island of Bangka, is the province’s highest point, with a height of 699 m (2,293 ft). There are several rivers in the province, such as the Sebuku River, Baturusa River and Mendo River. Bangka Belitung is ethnically, culturally and linguistically diverse; major ethnic groups including Malays, Chinese and Javanese. Indonesian is the official language, while the local Malay dialect and Hakka serves as the lingua franca of the province. 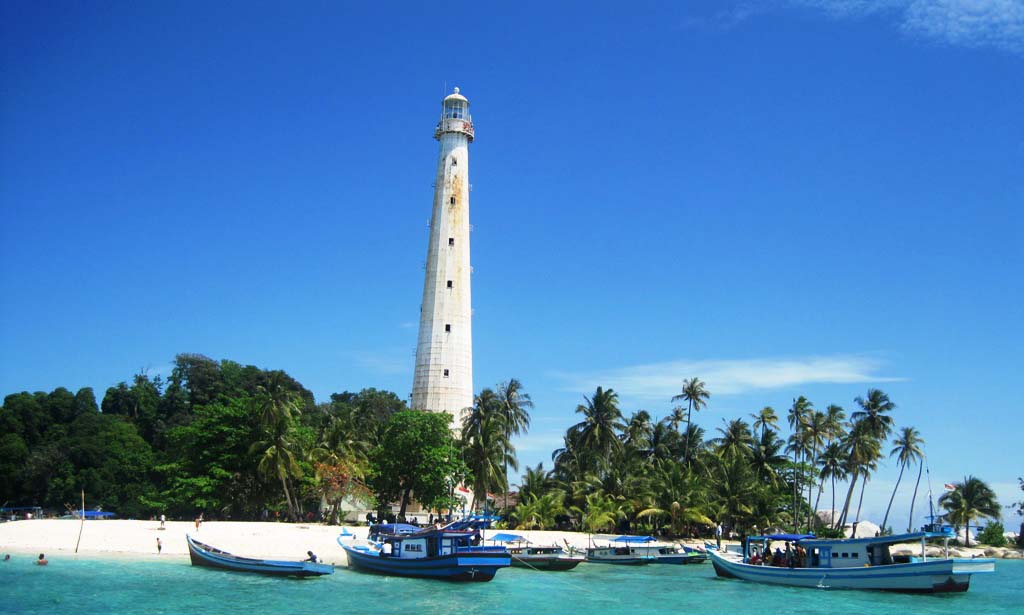 The name “Bangka” is derived from the word wangka (वन्च, ‘vanca’) meaning “tin” in Sanskrit, because this region is indeed rich in tin mining. The name “Wangka” first appeared along with the name “Swarnabhumi” in the Indian literary book Milindrapantha from the 1st Century BC.

Swarnabhumi is identified as the island of Sumatra, the strong allegation that the so-called “Wangka” is the island of Bangka. Louis-Charles Damais, in his book Epigraphy and History of the Nusantara, affirms that Bangka comes from the word vowel (vanca). 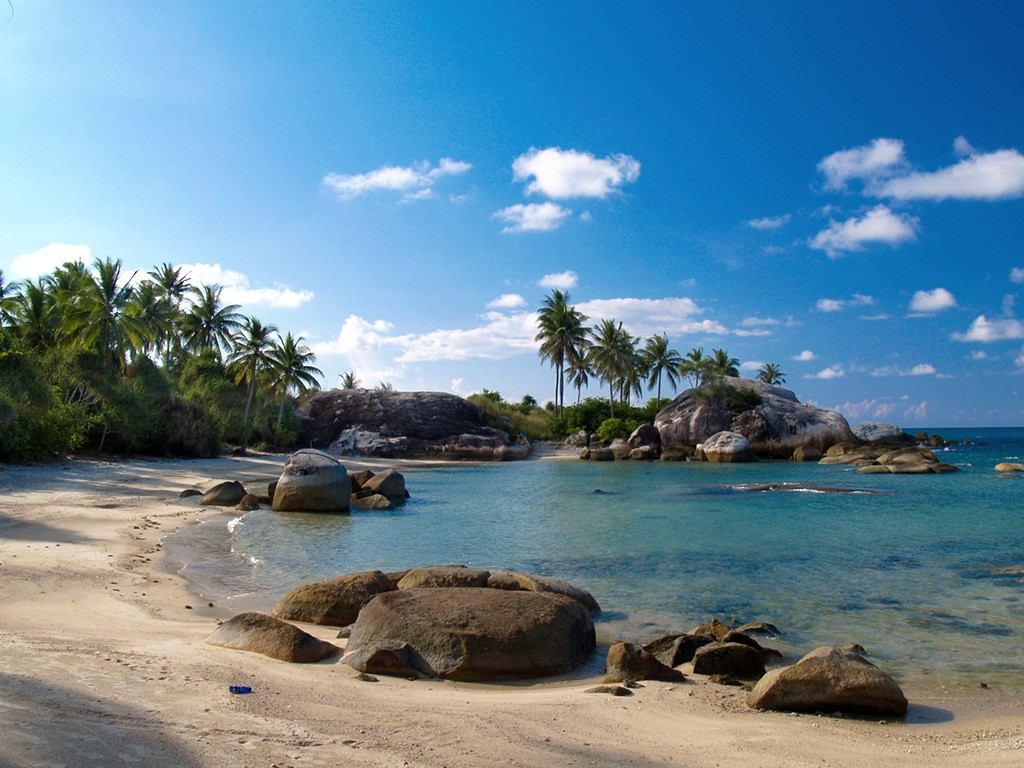 The name “Belitung” is derived from Billitonite meaning the Black Meteorite in Dutch, which is commonly found in the island of Belitung. This stone itself was discovered at the time of tin mining in Belitung.

Bangka Belitung is an area that has a unique range of cultures and languages. Just like other provinces in Indonesia, Bangka Belitung has served as European and Japanese colonies.

Prior to the colonies era, Bangka Belitung has become part of several kingdoms in Sumatra and Java. Sriwijaya and Majapahit are the kingdoms who settled Bangka Belitung to expand their power.

Bangka Belitung province was created as the 31st province by the Government of the Republic of Indonesia based on Law No. 27 of 2000, having been formerly part of the South Sumatra province. The provincial capital is Pangkalpinang. 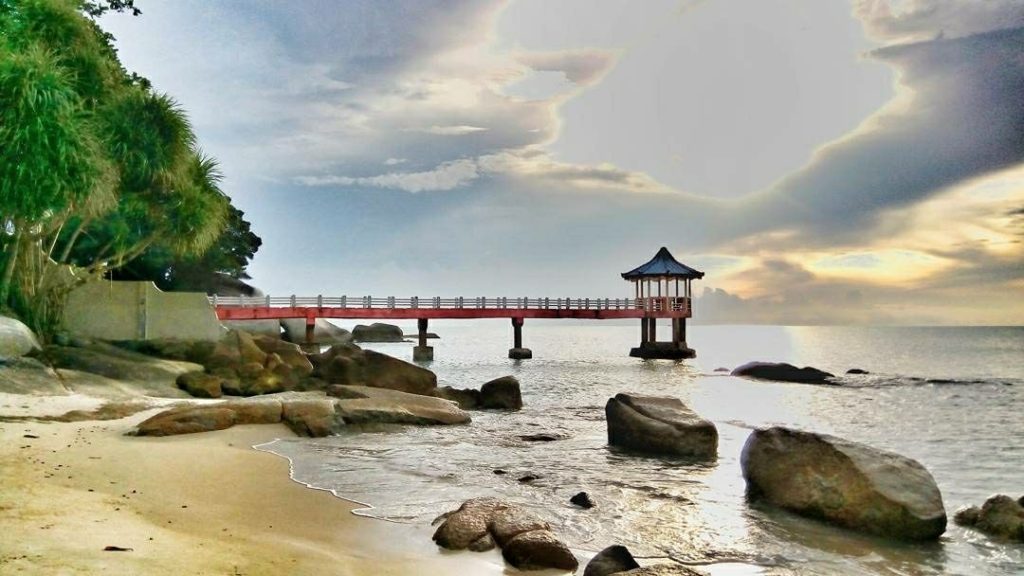 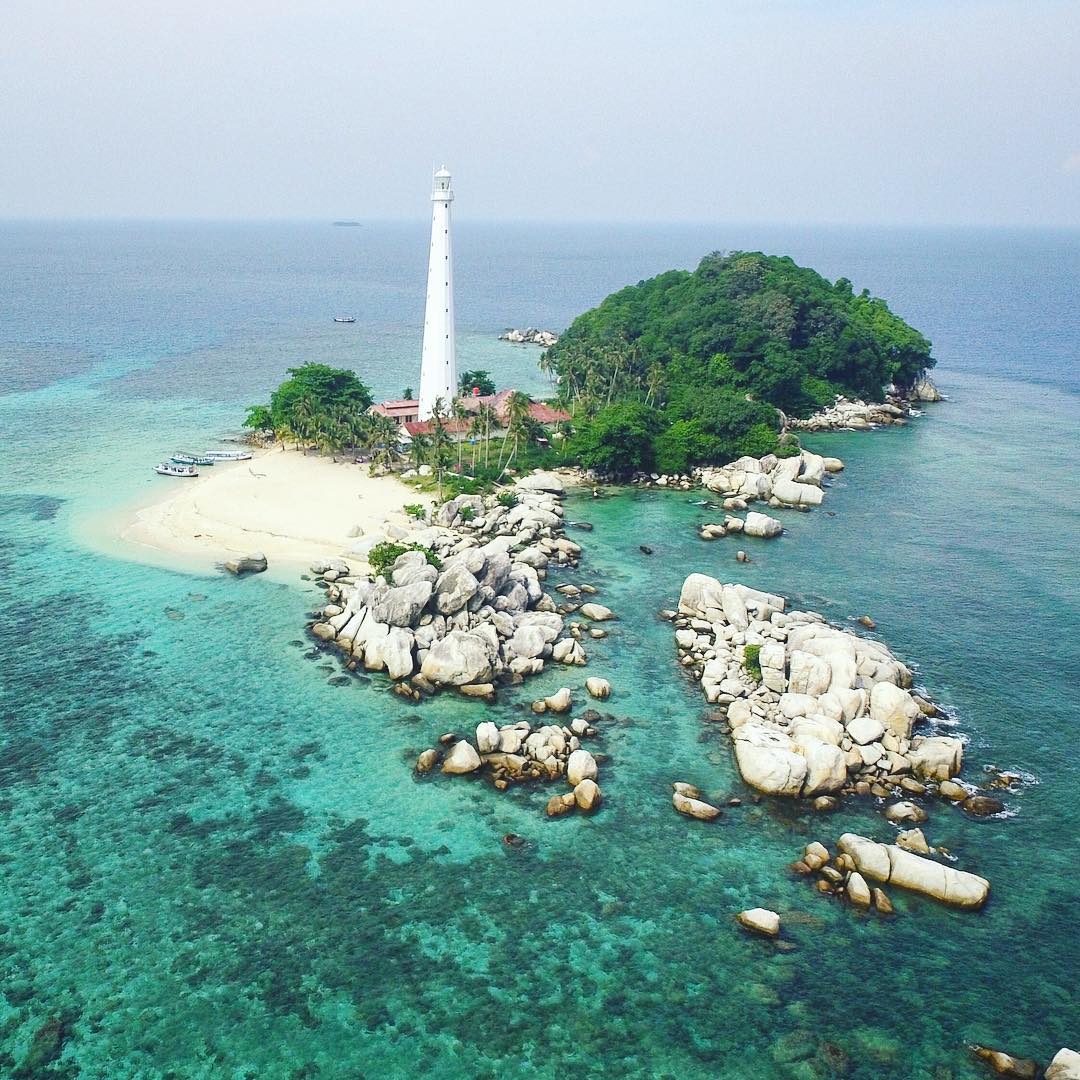 As for the hilly areas like Bukit Menumbing reaches a height of approximately 445 metres (1,460 ft) in the Bukit Nenas and Mangkol district with a height of about 395 metres (1,296 ft) above sea level in the Pangkalan Baru district.

Soil in Bangka Belitung generally have a pH or acidic soil reaction averaging below 5, but has a very high aluminium content. Within it are various minerals, such as tin, sand, quartz sand, granite, kaolin, clay, and others.

The province is connected by sea waters and small islands. Overall land and water Bangka Belitung is an integral part of the plains of Sunda, so that its waters are part of the Sunda Shelf with a sea depth of no more than 30 meters. 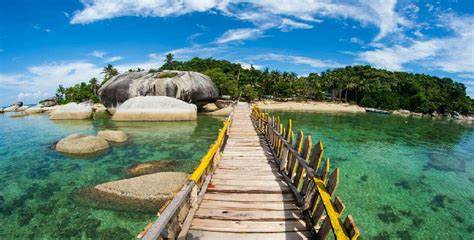 In addition, as the territorial waters of the sea, the area of Bangka Belitung Island also has many rivers such as Baturusa, Layang, Manise, and Kurau rivers.

Bangka Belitung has various kinds of quality wood that is traded outside the region, such as pelawan, meranti, ramin, mambalong, mandaru, bulin and kerengas. Other forest plants found in the island are keramunting, buk-buk, mate ayem, kapuk, jelutung, pulai, gelam, meranti rawa, mentagor, mahang, various species of mangrove, and others.

Other forest products are natural honey and rattan. Bangka Belitung is also known for its bitter honey. Fauna in Bangka Belitung have more common similarities with the fauna in the Riau Archipelago and Peninsular Malaysia than with Sumatra. Some of the animals that can be found in Bangka Belitung are deer, wild boar, beruk, eagle, weasel, and hare, among others. 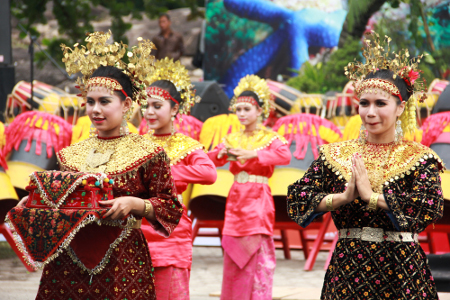 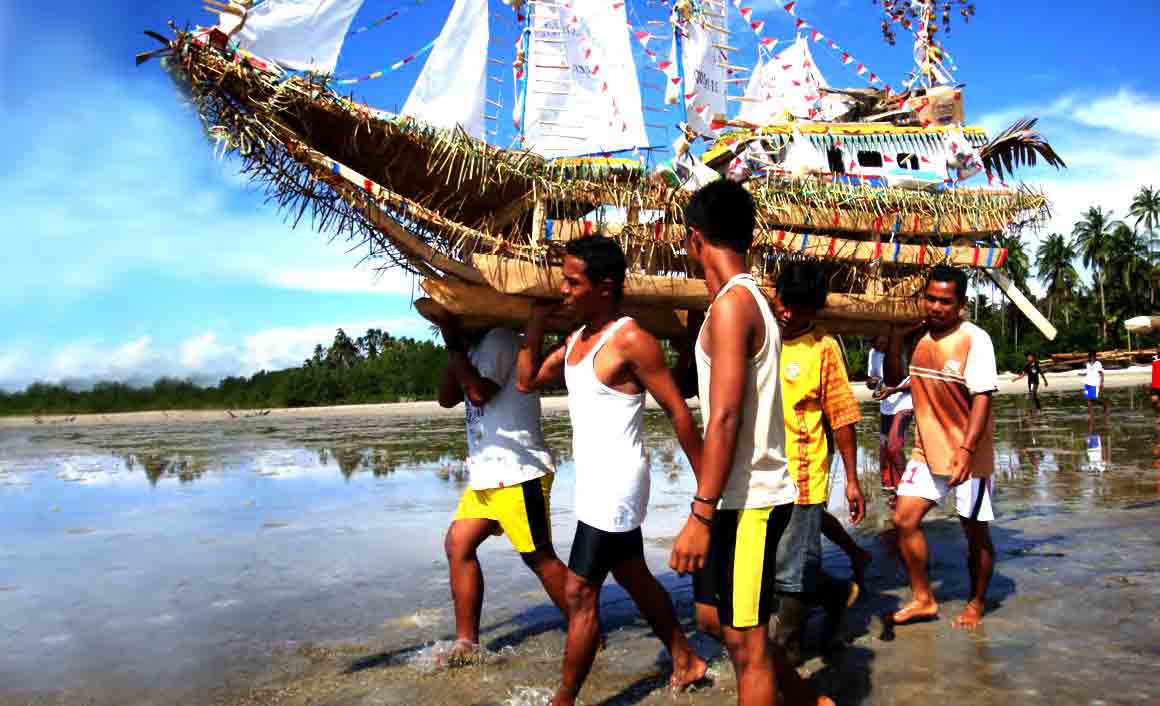 Ethniciy. The inhabitants of Bangka Island and Belitung Island originally inhabited by the Orang Laut, in the course of a long history formed the process of culture and acculturation. The Orang Laut themselves came from various islands.

The Malay is the largest ethnic group in the province. They form around 52.5% of the total population. The Malays are mostly concentrated around the interior of Bangka and Belitung. The Malay are divided into the Bangka Malay and the Belitung Malay. These 2 group are slightly different ranging from their culture to their language. 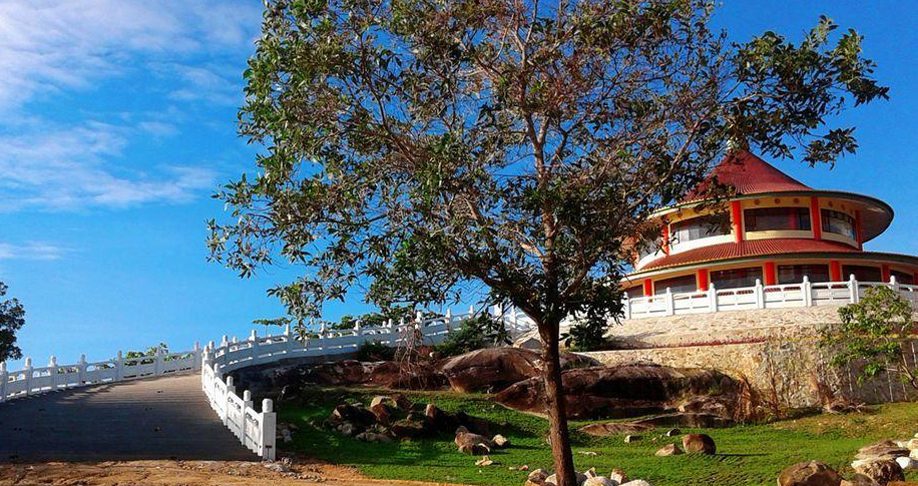 The second largest ethnic group is the Chinese, forming around 29.1% of the total population. The Chinese are mostly concentrated in the coastal part of Bangka and Belitung or urban areas. The rest of the population consist of immigrants from other parts of Indonesia such as the Javanese, Minangkabau and the Bugis.

Bangka Belitung has 730 mosques, 87 Protestant churches, 30 Catholic churches and 48 monasteries. Number of pilgrims registered and departed to Mecca in 2007 as many as 1012 pilgrims. 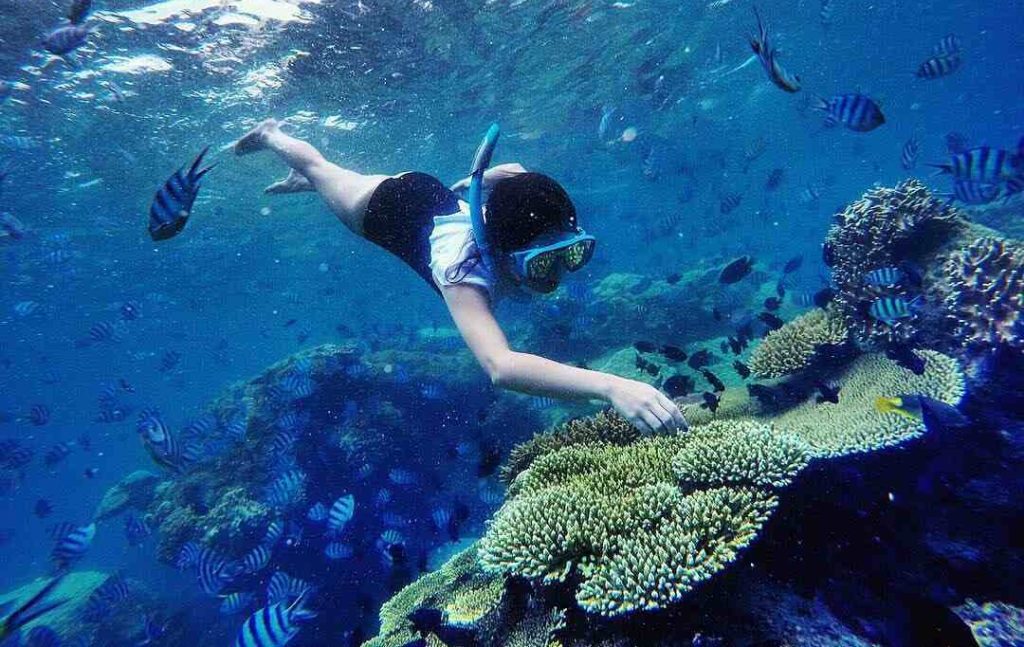 Bangka Belitung has numerous beaches and several small islands. Some beaches are famous for their natural attractiveness with blue sea waters, variety of coral reefs, white sand, and giant granite rock formations. Thus, Bangka Belitung beaches have attracted tourists from around the world.