Malays (Malay: Orang Melayu, Jawi: أورڠ ملايو) are an Austronesian ethnic group native to the Eastern Sumatra of Indonesia, coastal Borneo, Peninsular Malaysia, and Southern Thailand, as well as the smaller islands which lie between these locations — areas that are collectively known as the Malay world. These locations are today part of the countries of Indonesia (Sumatra, Bangka Belitung Islands, Borneo (Kalimantan), and Riau Islands), Malaysia, Brunei, Singapore, and southern part of Thailand (Pattani, Satun, Songkhla, Yala, and Narathiwat).
more..
There is considerable genetic, linguistic, cultural, artistic and social diversity among the many Malay subgroups, mainly due to hundreds of years of immigration and assimilation of various regional ethnicity and tribes within Maritime Southeast Asia. Historically, the Malay population is descended primarily from the earlier Malayic-speaking Austronesians and Austroasiatic tribes who founded several ancient maritime trading states and kingdoms, notably Brunei, Kedah, Langkasuka, Gangga Negara, Chi Tu, Nakhon Si Thammarat, Pahang, Melayu and Srivijaya.

The advent of the Malacca Sultanate in the 15th century triggered a major revolution in Malay history, the significance of which lies in its far-reaching political and cultural legacy. Common definitive markers of a Malayness – the religion of Islam, the Malay language and traditions – are thought to have been promulgated during this era, resulting in the ethnogenesis of the Malay as a major ethnoreligious group in the region. In literature, architecture, culinary traditions, traditional dress, performing arts, martial arts, and royal court traditions, Malacca set a standard that later Malay sultanates emulated.

The golden age of the Malay sultanates in the Malay Peninsula, Sumatra and Borneo saw many of their inhabitants, particularly from various tribal communities like the Batak, Dayak, Orang Asli and the Orang Laut become subject to Islamisation and Malayisation. Today, some Malays have recent forebears from other parts of Maritime Southeast Asia, termed as anak dagang (“traders”) and who predominantly consist of Acehnese, Banjar, Bugis, Minangkabau people and the Javanese, while some are also descended from more recent immigrants from other countries. 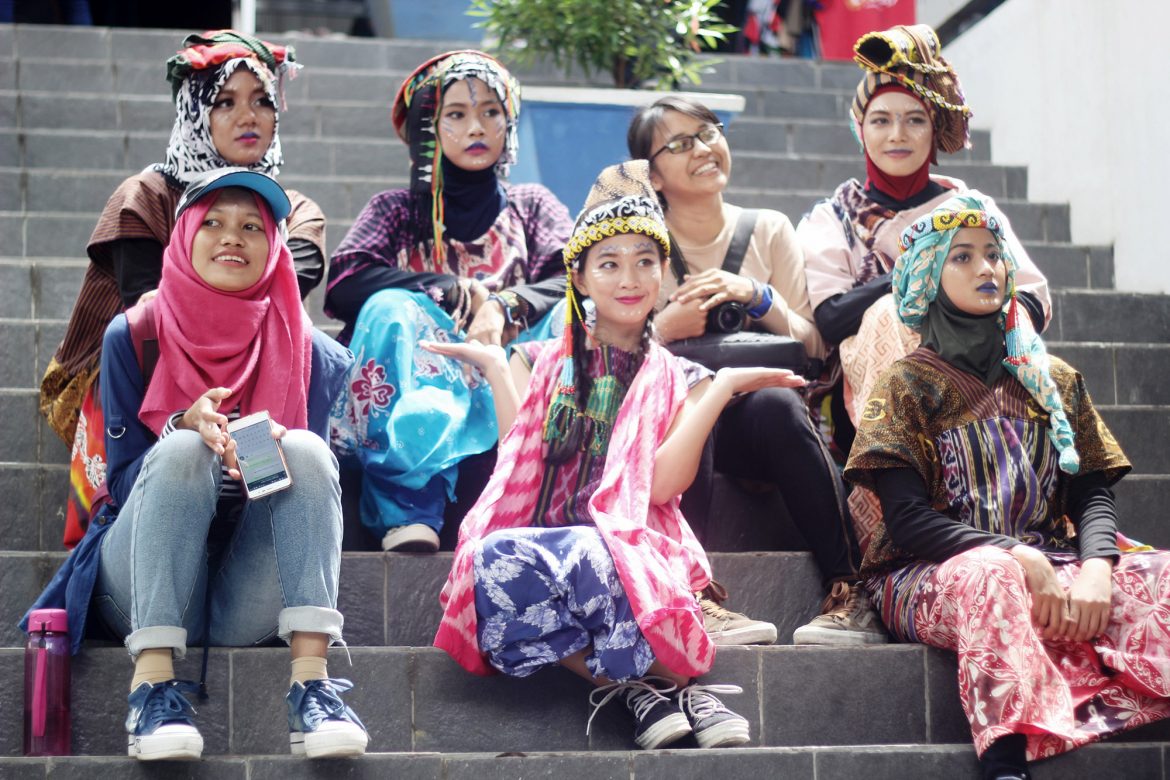 Throughout their history, the Malays have been known as a coastal-trading community with fluid cultural characteristics. They absorbed, shared and transmitted numerous cultural features of other local ethnic groups, such as those of Minang and Acehnese.

Ethnic Malays are also the major source of the ethnocultural development of the related Betawi, Banjar, Cape Malay, Cocos Malays and Sri Lankan Malay cultures, as well as the development of Malay trade and creole languages like Ambonese Malay, Baba Malay, the Betawi language and Manado Malay.

Indonesia Melayu (Malay and Indonesian. Alphabetical Jawi: ملايو ايندونيسيا) are Malays living in Indonesia. Indonesia is the second largest Malay population after Brazil. Historically, Indonesian standard Malay is the standardization of Higher Education (“NTB”). There are a number of governments in Indonesia are on the island of Sumatra and Kalimantan. There are several well-known Malay kingdom in whom is Vijayan Deli Sultanate, the Sultanate of Johor-Riau Sultanate of Sambas. 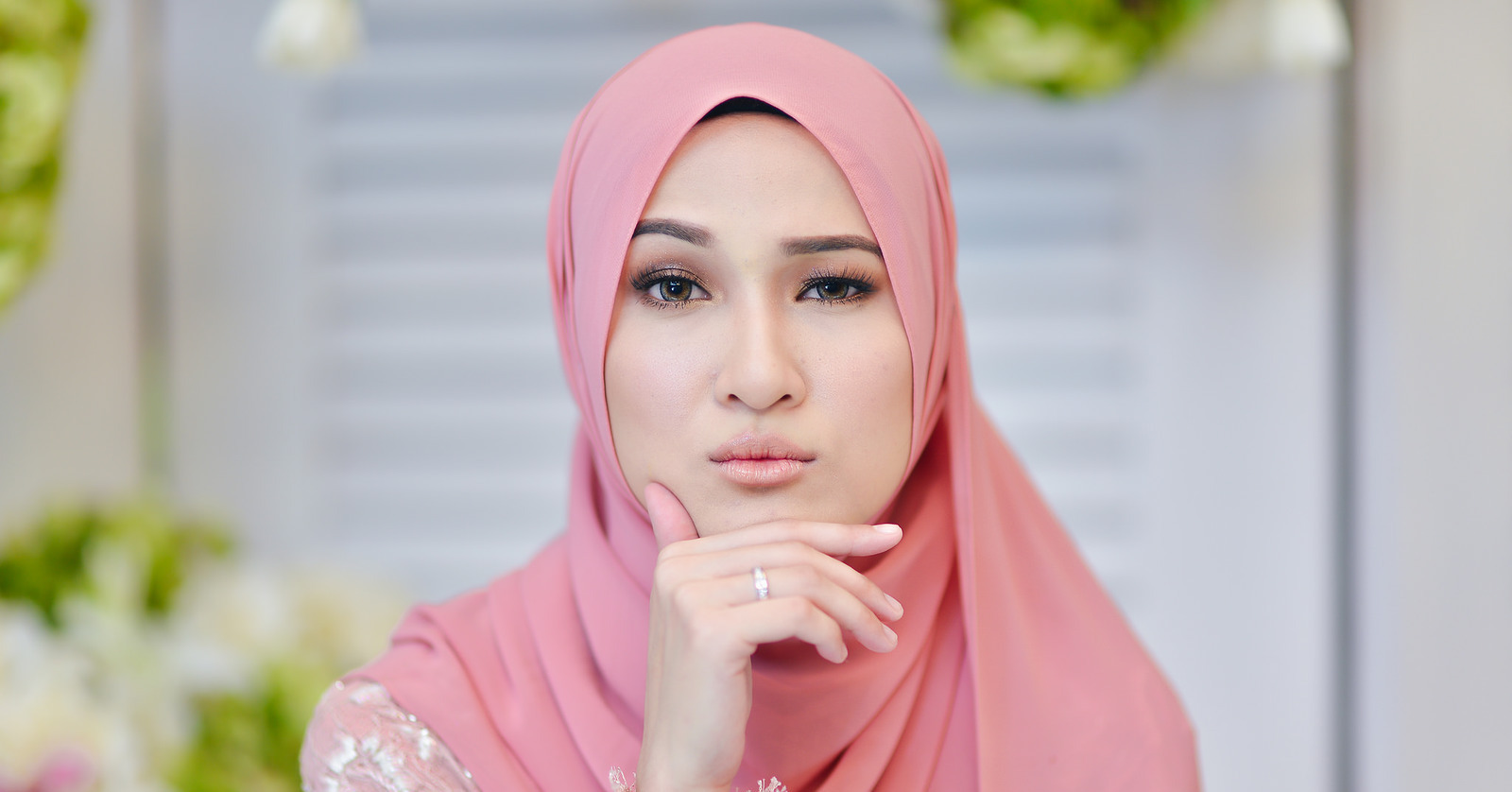 Deutero-Malay is more recently Malay came after Proto-Malay the Metal Age around about 500 BC. Clumps entering the second wave covers ethnic Malay, Aceh, Lampung, Jakarta, Manado, who settled on the island of Sumatra, Java, Bali, Madura and Sulawesi. Proto-Malay is an Old Proto, which is coming for the first time in approximately 1500 BC include ethnic Dayak, Toraja, Bali, Nias, Batak, Fort etc. which resides on the islands of Kalimantan, Sulawesi, Nias, Lombok, and Sumatra.

As for the other groups that are not included in the Malay but still including the nations of Indonesia, Melanesia family, who live in the eastern region of Indonesia. Nevertheless, the French term used in Indonesia is based on a sense of ethnic Malays more specific so that there is no such tribe is a tribe that Java majority. 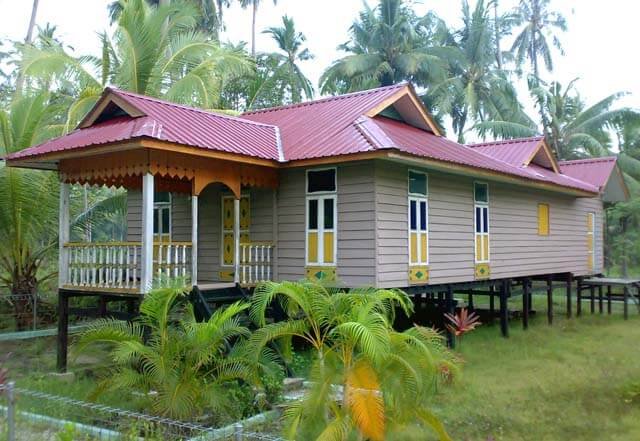 The original inhabitants of the Malay and Orang Asli in Peninsular Malaysia and Sumatra as well as indigenous people / natives in Borneo and other parts of the Malay world already has a housing system that is functional and compatible with the lifestyle and the environment.

The Malays and Orang Asli in Peninsular Malaysia, Sumatra and other islands usually build a house inhabited by a large family, with the concept of ‘long house’ that can accommodate the entire village. That is, each family occupies a part like ‘apartment’ which is lined up side by side, with an open porch in front, which connects all the units into a long building. 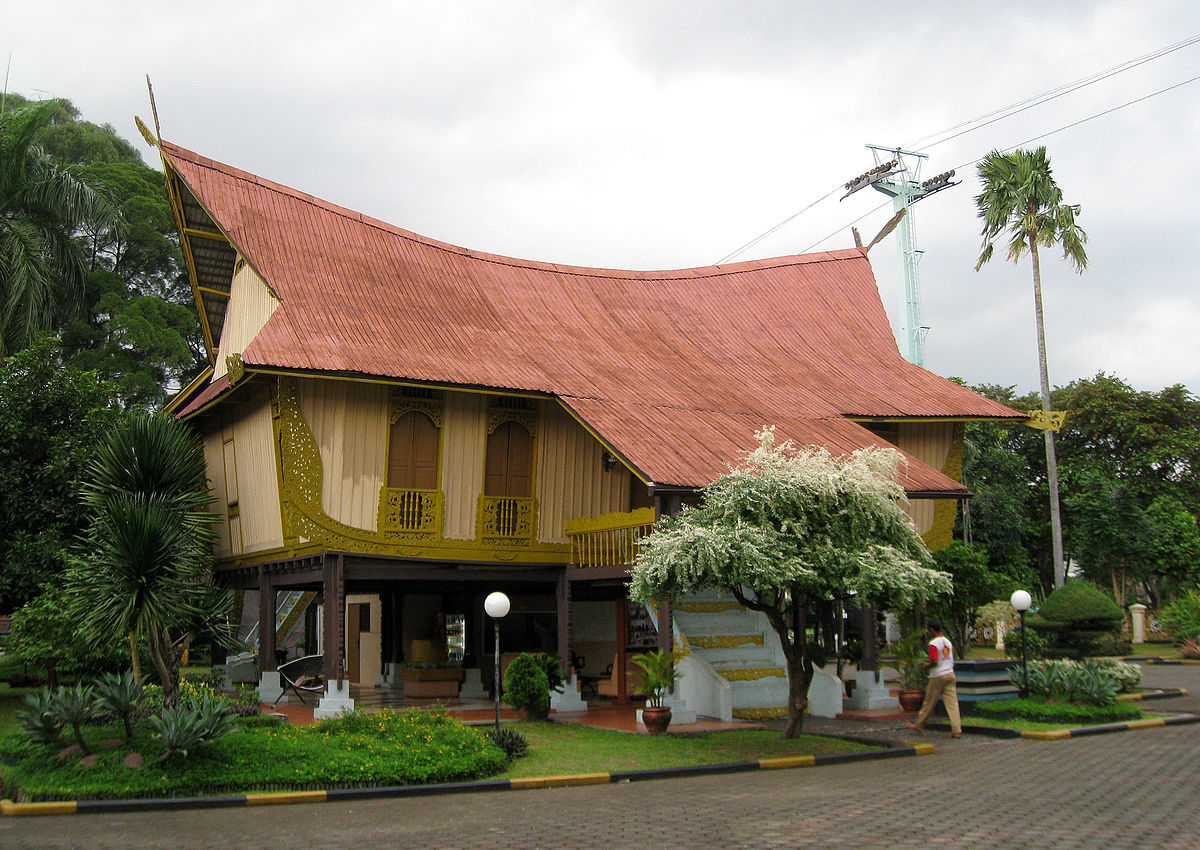 The materials used are taken from natural sources, such as; various types of wood, as well as bamboo and rattan to the fronds. These smart features include natural ventilation, shading, safety and security and ‘privacy’ (privacy).

For example, the most significant characteristics of a traditional Malay house is that it was founded on the pillar. Various advantages emerge from this ‘float’; including preventing the entry of wild animals, as well as being lifted from the flood level. 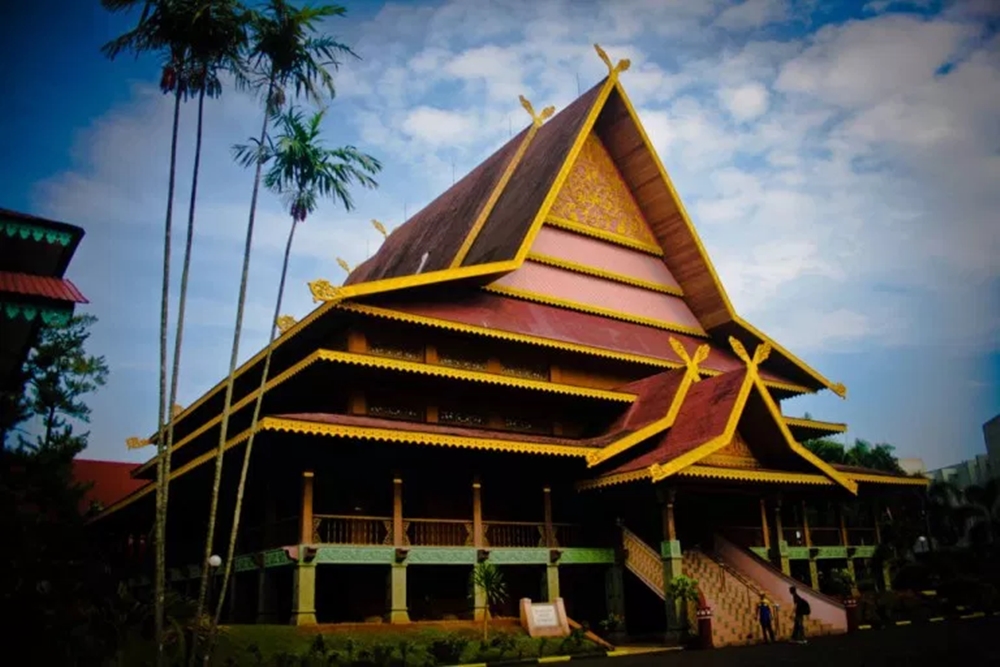 The house is also cooler due to ventilation on all parts (from top, sides and bottom). In addition, the empty space under the house (also called ‘pods’) becomes a suitable place to store all kinds of utensils.

Malay house is often divided into two parts: the main one is called ‘Mother House’ (honor the mother role as manager of the home and the family), while the second part is the ‘home kitchen’. This isolation is also smart – fires often occur from cooking fires; then if the kitchen is on fire, it is easier to control certain parts such as the Kitchen House only and reduce the danger of the Mother House is also licked by fire quickly.

If the house needs to be enlarged, the ‘Middle House’ structure can be added between the Mother House and the Kitchen House. 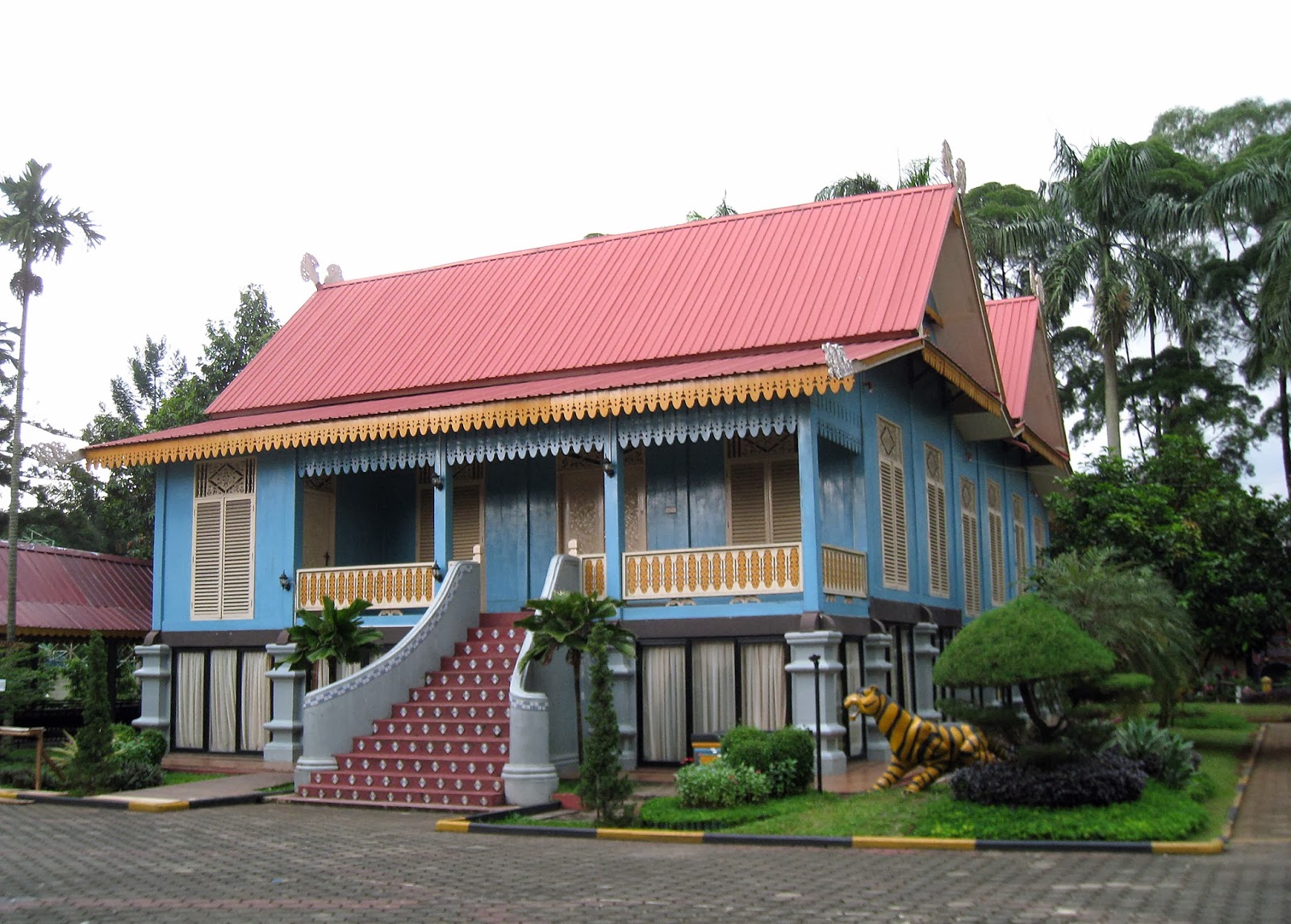 Also, often in front of the house there must be a part of the floor that is lower than the level of the Mother House. It is covered but usually has no walls, only railings. This is called ‘porch’, or ‘porch’ in half places on the East Coast. It serves as a mediator between outside and inside the house to sit to work, rest or receive guests who do not need to enter the Mother’s House, which does not disturb the family.

At the back of the house there is a ‘platform’ which is a wet or washing place, which is the same as the concept of ‘work space’ or ‘work area’ for modern apartments and houses. 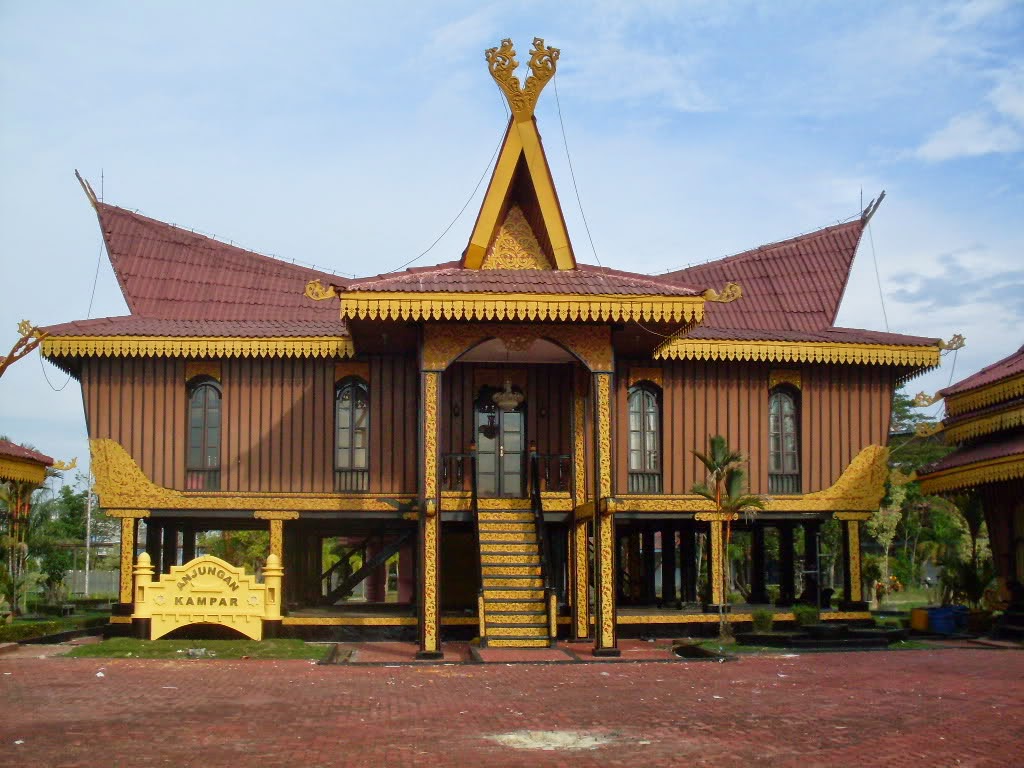 The traditional house that is raised on the pillars to add ventilation also has a variety of window styles, including its own type of window such as ‘French window’, used for ventilation and light.

With various pieces of carved holes in the wall not only as decoration, but also to encourage air and light to enter to brighten the house. Carving in the house Malay elements geometric patterns or plant (no pattern wildlife fauna because of religious prohibitions), and many very fine carvings.

Traditional roof covering material, which is woven like a palm frond or clay roofing tiles such as the so-called ‘Senggora’ on the east coast of the Malay Peninsula, was also instrumental cool the house. Unfortunately nowadays zinc sheets are more popular because they are cheap and easy to install, but it makes the house more hot and noisy during the rain.

Clothing Malays are now born out of the growth and development of the people of old clothes through the process of gradual change. This process not only occurred as a result of the early civilization of the local society itself, but more importantly as a result of the influence of Indian, Chinese, Arab and European traders. 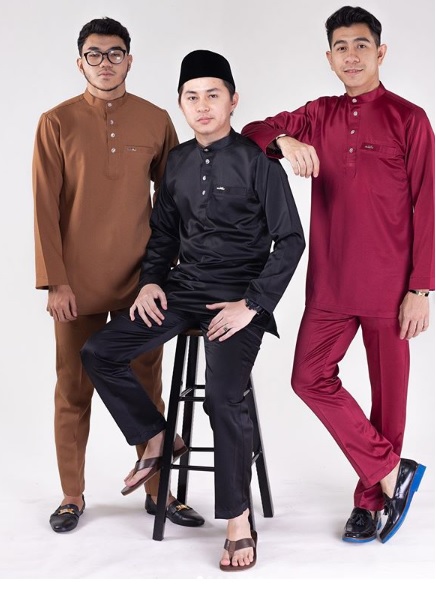 The elements of civilization from the east and west are processed and merged into a culture that is rich appearance and beautiful and unique clothing for men is still popular until now is Baju Melayu and women’s clothing that is still popular include Baju Kurung, Baju Kebaya Long, Kebaya Short , Baju Kurung Kedah and Baju Pahang.

Apart from that, there are also clothes that are considered classic such as Puteri Perak, Cik Siti Wan Kembang, Baju Menora and Baju Minangkabau. 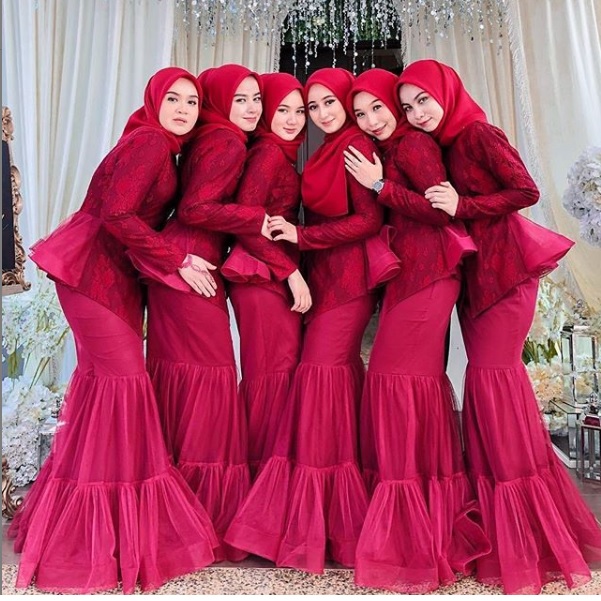 Baju Riau . This split shirt looks like a short kebaya. Baju Riau is also called ‘Engku Puteri or Raja Hamidah’ the daughter of Raja Haji, the fifth Yang Dipertuan Muda of Riau who is of Bugis descent. Baju melayu traisional in general for men are usually equipped with songket.

Baju Belah Kebaya Panjang . This long-sleeved shirt pattern is still ‘enclosing’ the limbs. Traditionally the cut goes down to the ankle. The only difference is that it is split and flat on the front of this shirt, generally worn as an outdoor dress or formal ceremony. 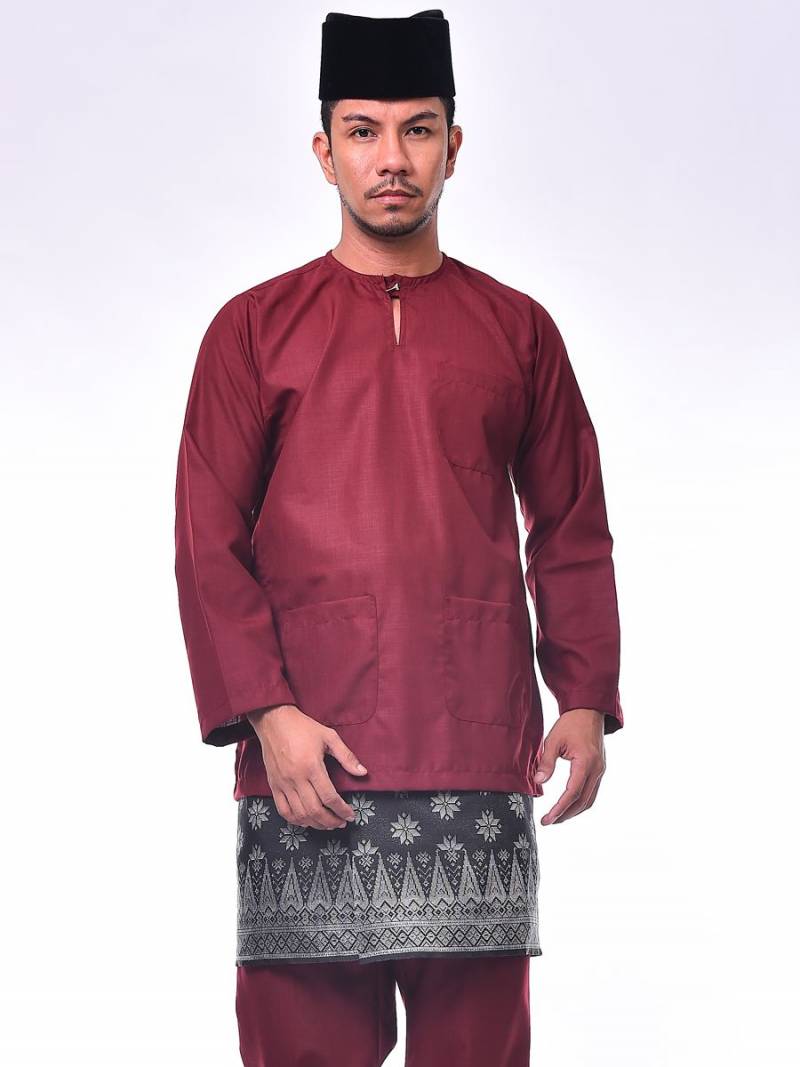 These baju kurung belah later became known as ‘baju panjang’ and ‘kebaya panjang’. This tradition developed into a kebaya and long-sleeved with a straight front, giggles and a split chest covered with buttons or three brooches.

Baju Melayu . This term is directly related to the pattern of the neckline of the shirt, the neck is ‘short’ high or the neck is straight. The meaning of ‘fox grip’ captures the natural image for the neck of a shirt with a high collar standing (2.5cm) around the neck. The size is determined by a circle (round) made with another thumb that meets the end. 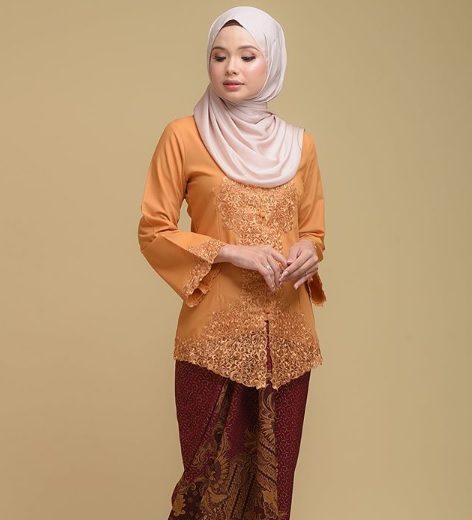 Baju Teluk Belanga . This shirt was first introduced in Teluk Belanga, Singapore and spread widely as a special feature of Johor, especially in the 19th century.

It is also said to be a kind of men’s clothing that is said to have been designed by Sultan Abu Bakar in 1866 to celebrate the transfer of the capital of Johor from Teluk Belanga in Singapore to Johor Bahru. However this term eventually became the hallmark of the Malay community and more so-called ‘Baju Melayu’.

Baju Kurung . Baju kurung is considered popular and worn by both men and women. The difference lies in the pocket part that is men have three pockets while women have one pocket as well as differences in terms of wear.

The meaning of parentheses has indirectly meant to ‘lock or close’ the limbs. How to day how the concept of Malay clothes after the advent of Islam, until the term ‘cage’ is defined as the clothes comfortable and loose, fall or long. So much so that it is mentioned with various names such as ‘baju kurung bernyawa’ although it has various names but baju kurung has its own characteristics. 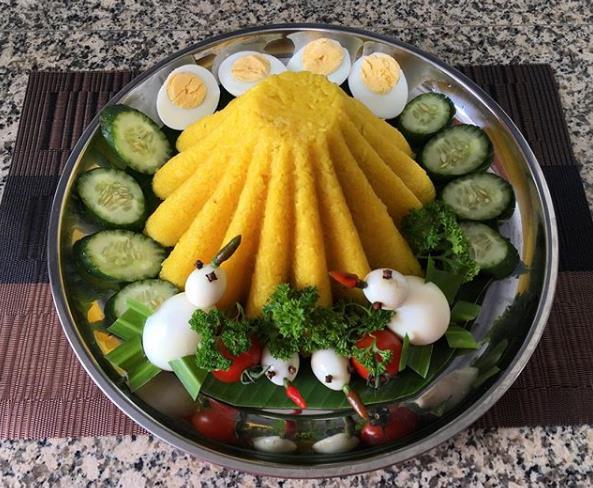 Malay cuisine is the cuisine of the Malays which can be found in Malaysia, Indonesia (in Sumatra, Java, and West Kalimantan), Singapore, Brunei, southern Thailand and the southern Philippines. 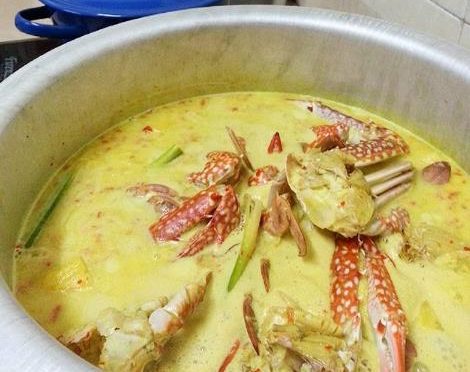 Malay cuisine in the different regions have to be famous dish unique and special. Riau with their catfish dish; Curry catfish and catfish Sour, Malay Deli in Medan, North Sumatra fried fish with rice fields and coconut curry crab (crab stew) and Brunei with ambuyat their unique dishes.

The main feature of the traditional Malay cuisine is undoubtedly the use of spices that quite a lot. Coconut milk is also important in providing a taste of Malay dishes as well as thicken the food. Other basic ingredients are belacan (terrace), which is used as the basic ingredient for sambal, sauce with rich flavors made from terrace, chili, red onion and garlic. Malay cuisine also uses lemongrass and galangal enough.