The Javanese people (Javanese: Ngoko: ꦮꦺꦴꦁꦗꦮ (Wong Jawa), Krama: ꦠꦶꦪꦁꦗꦮꦶ (Tiyang Jawi); (Indonesian: Suku Jawa or Orang Jawa) are an ethnic group native to the Indonesian island of Java. With approximately 100 million people, they form the largest ethnic group in Indonesia. They are predominantly located in the central to eastern parts of the island. There are also significant numbers of people of Javanese descent in most provinces of Indonesia.
more..
A majority of the Javanese people identify themselves as Muslims, with a minority identifying as Christians and Hindus. However, Javanese civilization has been influenced by more than a millennium of interactions between the native animism Kejawen and the Indian Hindu—Buddhist culture, and this influence is still visible in Javanese history, culture, traditions, and art forms.

With a sizeable global population, the Javanese are considered significant as they are the fourth largest ethnic group among Muslims in the world after the Arabs, Bengalis, and Punjabis. 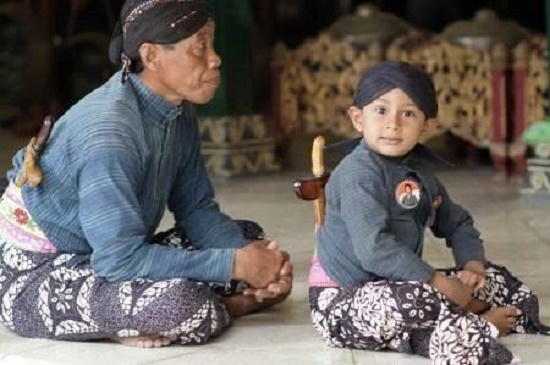 The Javanese culture is one of the oldest civilisations and has flourished in Indonesia. It has gradually absorbed various elements and influences from other cultures, including native reverence for ancestral and natural spirits, Hindu and Buddhist dharmic civilisation, Islamic values, and to a lesser extent, Christianity, Western philosophy and modern ideas.

These Javanese values are often promoted through Javanese cultural expressions, such as Javanese dance, gamelan, wayang and batik. It is also reinforced through adherence to Javanese adat (traditional rules) in ceremonies, such as Slametan, Satu Suro, Javanese weddings and Naloni Mitoni. 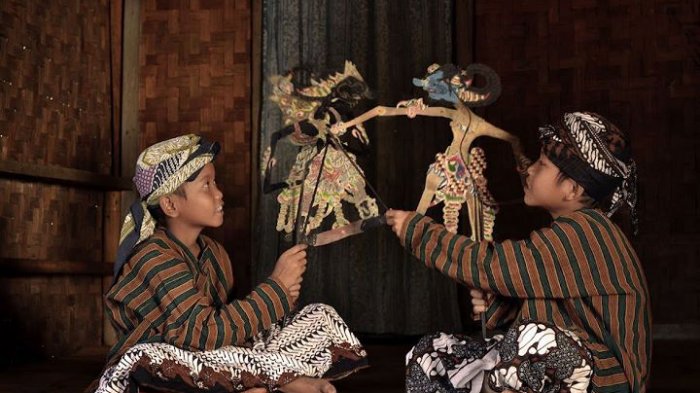 However, the culture of pesisiran of Javanese north coast and in Eastern Java demonstrates some slightly different traits. They tend to be more open to new and foreign ideas, more egalitarian, and less conscious of one’s social stature.

Some of these northern settlements — such as Demak, Kudus, Tuban, Gresik and Ampel in Surabaya — have become more overtly Islamic, traditionally because these port towns are among the earliest places that Islamic teachings gained foothold in Java. Gamelan is one of Javanese cultural expression that demonstrate refinement.

Javanese culture is traditionally centred in the Central Java, Yogyakarta and East Java provinces of Indonesia. Due to various migrations, it can also be found in other parts of the world, such as Suriname (where 15% of the population are of Javanese descent), the broader Indonesian archipelago region, Cape Malay, Malaysia, Singapore, Netherlands and other countries.

The migrants bring with them various aspect of Javanese cultures such as Gamelan music, traditional dances and the art of Wayang kulit shadow play. The migration of Javanese people westward has created a coastal Javanese culture in West Java distinct from the inland Sundanese culture.

There are more than 20 traditional dances originating from the Central Java region, Yogyakarta, and East Java. Traditional dance that expresses feelings, behavior and enthusiasm, which was created by the ancestors. 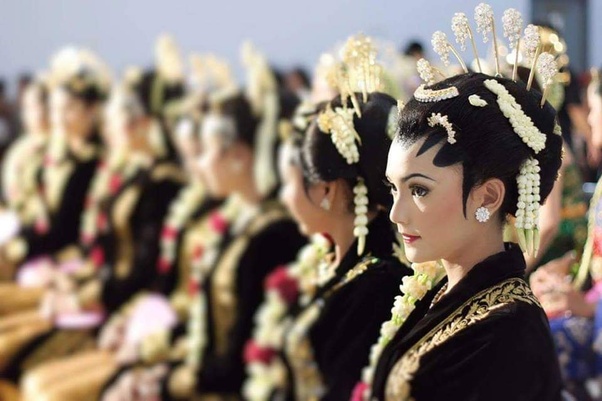 Javanese is a member of the Austronesian family of languages and is closely related to, but distinct from, other languages of Indonesia. It is notable for its great number of nearly ubiquitous Sanskrit loans, found especially in literary Javanese. This is due to the long history of Hindu and Buddhist influences in Java.

Many Javanese in Indonesia are bilingual, being fluent in Indonesian (the standardized variant of the Malay language) and Javanese. In a public poll held circa-1990, approximately 12% of Javanese used Indonesian, around 18% used both Javanese and Indonesian, and the rest used Javanese exclusively.

The Javanese language was formerly written with a script descended from the Brahmi script, natively known as Hanacaraka or Carakan. 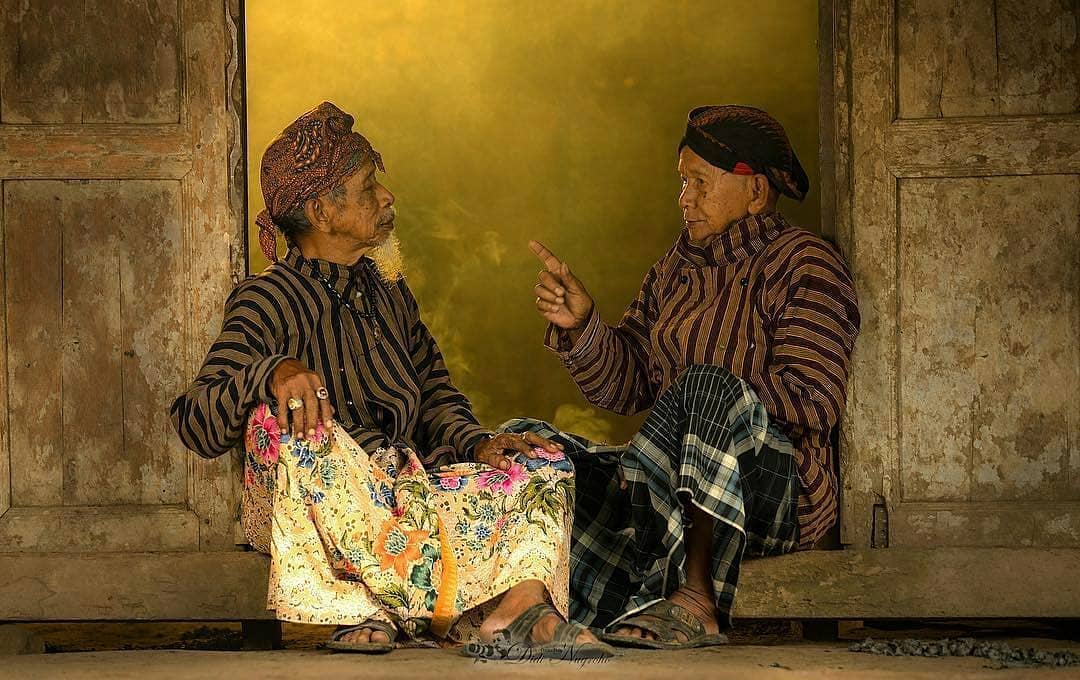 Upon Indonesian independence it was replaced with a form of the Latin alphabet. While Javanese was not made an official language of Indonesia, it has the status of regional language for communication in the Javanese-majority regions. The language also can be viewed as an ethnic language because it is one of the defining characteristics of the Javanese ethnic identity.

Javanese intellectuals, writers, poets and men of letters are known for their ability to formulate ideas and creating idioms for high cultural purpose, through stringing words to express a deeper philosophical meanings.

Above are pictures of various types of traditional Javanese traditional clothes, the usage of which is different from one another, both for men and women, or for special conditions and / or events, or, among other things, showing differences in social status (in the past , not the present era) who wear it. 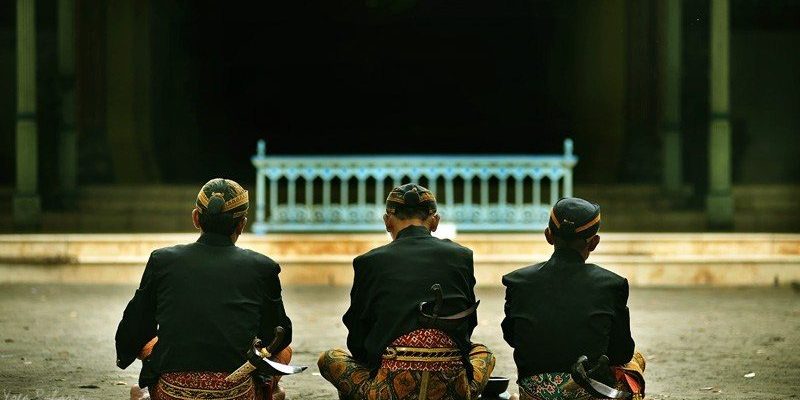 American anthropologist Clifford Geertz divided in the 1960s the Javanese community into three aliran or “streams”: santri, abangan and priyayi. According to him, the Santri followed an orthodox interpretation Islam, the abangan followed a syncretic form of Islam that mixed Hindu and animist elements (often termed Kejawen), and the priyayi were the nobility.

The Geertz opinion is often opposed today because he mixed the social groups with belief groups. It was also difficult to apply this social categorisation in classing outsiders, for example other non-indigenous Indonesians such as persons of Arab, Chinese and Indian descent. Social stratification is much less rigid in northern coast area. 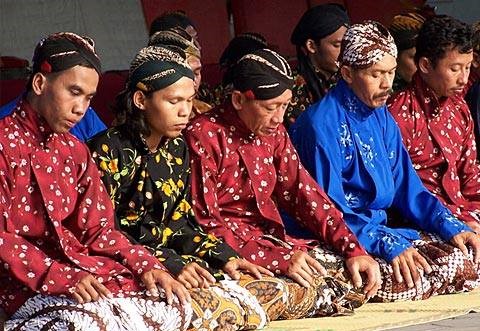 Today, most Javanese officially follow Islam as their religion, Orthodox Muslims are most common in the northern coast bordering the Java Sea, where Islam was first brought to the island. Islam first came in contact with Java during the Majapahit period, when they traded or made tributary relations with various states like Perlak and Samudra Pasai in modern-day Aceh.

A minority of Javanese also follow Christianity (Protestantism and Catholicism), which are concentrated in Central Java (particularly Surakarta, Magelang and Yogyakarta for Catholicism). Native Christian churches such as the Gereja Kristen Jawa also exist. On a smaller scale, Buddhism and Hinduism are also found in the Javanese community. The Javanese of the Tengger tribe continue to practice Javanese-Hindu today, and live in villages on the slope of Mount Bromo.

Kebatinan, also called Kejawen, Agama Jawa and Kepercayaan is a Javanese religious tradition, consisting of an amalgam of animistic, Hindu-Buddhist, and Islamic, especially Sufi, beliefs and practices. It is rooted in Javanese history and religiosity, syncretising aspects of different religions.

There are Masterpiece of Javanese culture, Gamelan, and Wayang. Besides that, there are also about dozens of traditional celebrations, which are rooted in customs and or religion, to commemorate events and to continue to activate the spirit of the values of goodness. 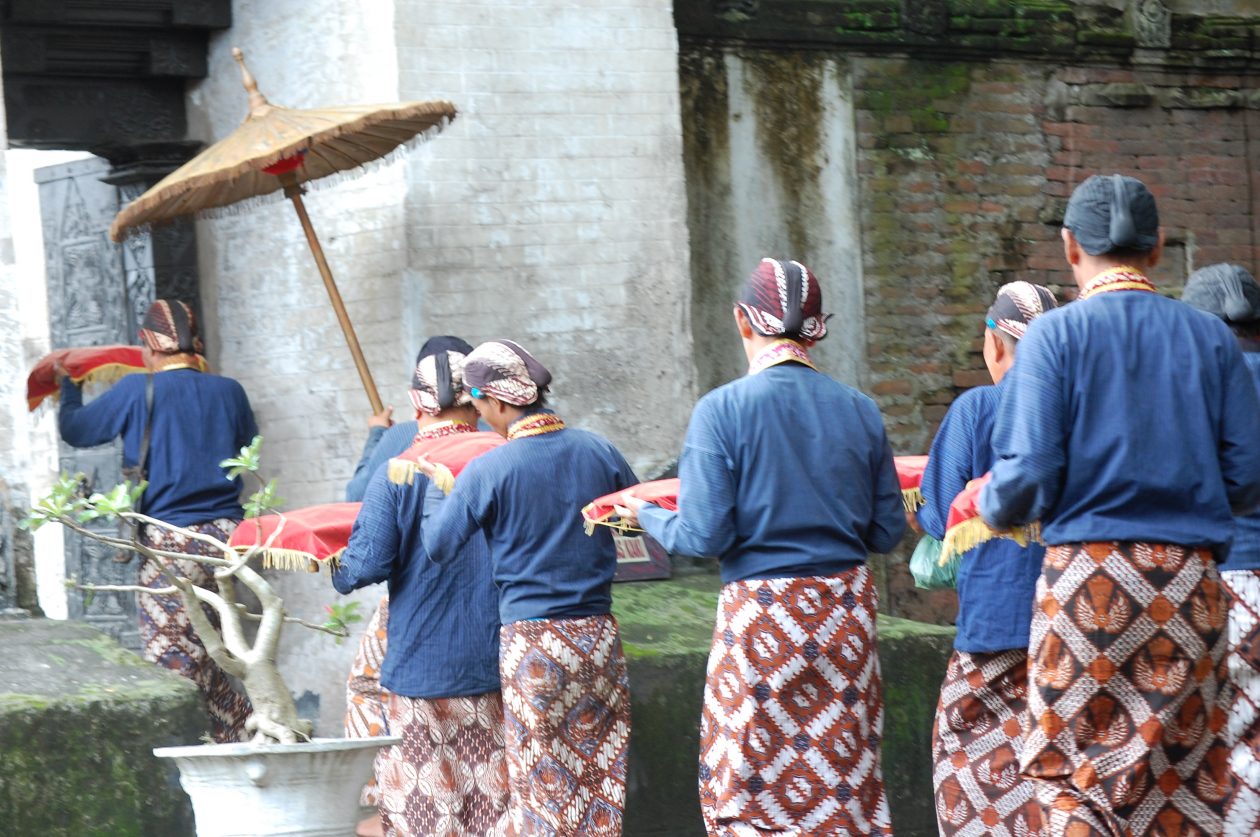 Unlike many other calendars, the Javanese calendar uses a 5-day week known as the Pasaran cycle. This is still in use today and is superimposed with 7-day week of the Gregorian calendar and Islamic calendar to become what is known as the 35-day Wetonan cycle.

Throughout their long history, the Javanese have produced many important buildings, ranging from Hindu monuments, Buddhist stupa, mortuary temples, palace complexes, and mosques.

Two important religious monuments are the Hindu temple of Prambanan and the Buddhist temple of Borobudur. Both of them are 9th century temples and UNESCO World Heritage Sites. Both are located near Yogyakarta in the slope of Mount Merapi.

Meanwhile, examples of secular buildings can be seen in the ruins of the former capital city of the Majapahit Kingdom (14th to 16th century AD) in Trowulan, East Java.

The complex covers an area of 11 km x 9 km. It consists of various brick buildings, a canal ranging from 20 to 40 meters wide, purification pools, temples and iconic split gates. The capital complex is currently being considered as a candidate for becoming a UNESCO World Heritage Site.

There are 47 temples located in three Provinces : Central Java, DI Yogyakarta, and East Java. The temple is a replica building where the gods live, with messages conveyed through architecture, reliefs, and statues that are never separated from elements of spirituality. 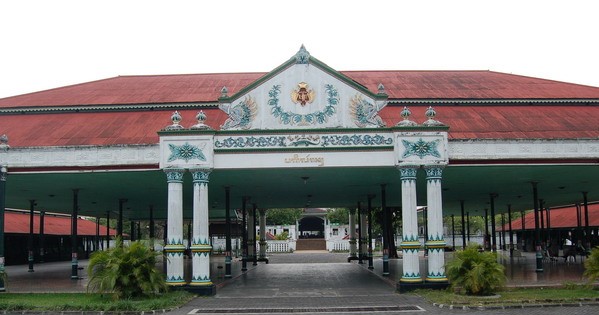 Traditional mosques in Java maintain a distinctive Javanese style. The pendopo model is used as the main feature of mosques as prayer halls. A trapezoidal roof is used instead of the more typically Muslim dome. These roofs are often multi-tiered and tiled.

In addition to not using domes, traditional Javanese mosques also often lack minarets. The split gate from earlier Hindu-Buddhist period is still used in many mosques and public buildings in Java.

Some notable examples of mosques using traditional Javanese architecture include the Agung Demak Mosque, the Menara Kudus Mosque and the Grand Mosque of Banten. The Kudus Mosque is also of note because it incorporates Hindu-style stone architecture.

Above are pictures of various types of buildings and / or traditional Javanese residences. All five are the default forms. In some areas where the majority of the population is Javanese, for example, in Central Java, Yogyakarta Special Region, and East Java, there are many variations and / or modified versions.
0
Religion and Belief
0
dialects of language
0
Countries They Live in
0
(million) Population 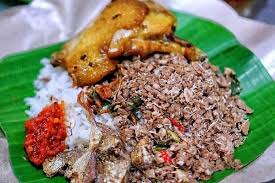 Javanese cuisine and culture place an important role in rice, which is a staple food on the island. Among the Javanese it is considered not to be a meal if a person hasn’t eaten rice yet.

It is also important part of identity that differentiate Javanese with foreigners that eat bread (the Europeans) and resident of other island who eat sago (for example Moluccans). Rice is also symbol of development and prosperity, while cassava and tuber is associated with poverty. 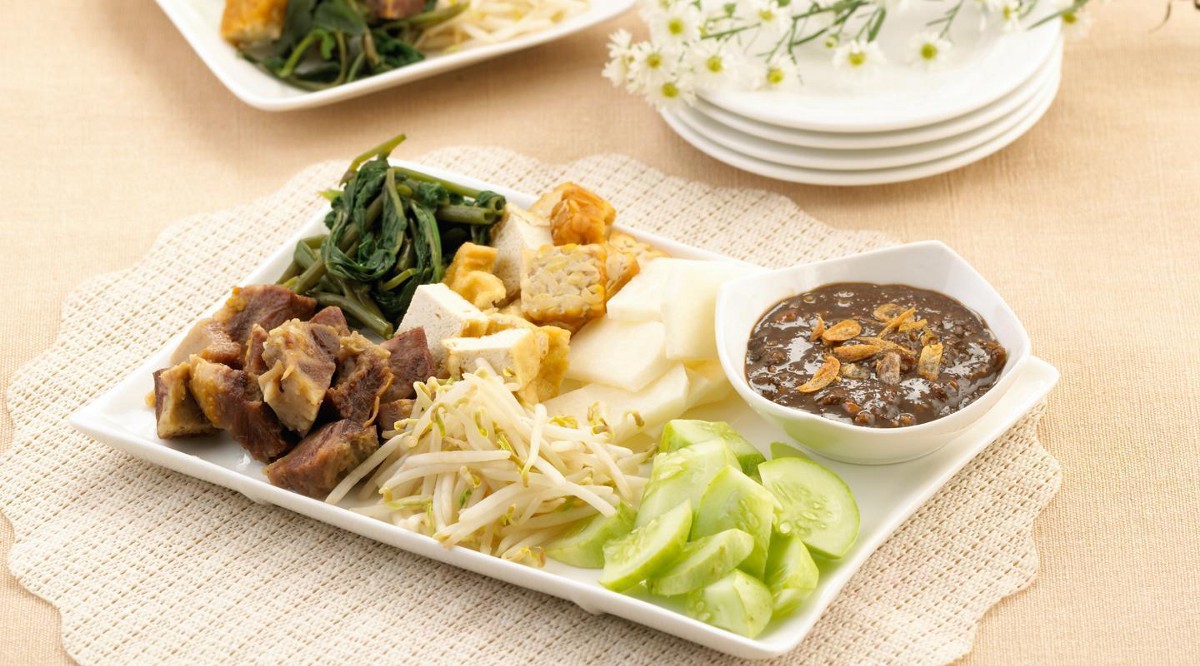 A famous food in Javanese cuisine is Rujak Cingur, marinated cow lips and noses served with vegetable, shrimp prawn and peanut sauce with chili. Rojak Cingur is considered a traditional food in Surabaya in East Java. 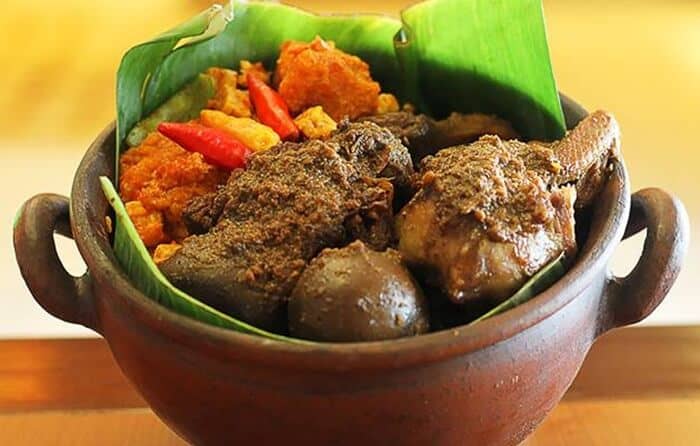 Gudeg is a traditional food from Yogyakarta and Central Java which is made from young Nangka (jack fruit) boiled for several hours with palm sugar, and coconut milk.

Pecel, a type of peanut sauce with chili is a common ingredient in Javanese cuisine. It is used in various types of Rujak and Gado-gado. It can also be used as stand-alone sauce with rice, prawns, eggs and vegetables as Nasi Pecel (Pecel rice).

Tumpeng, is a rice served in the shape of a conical volcano, usually with rice coloured yellow using turmeric. It is an important part of many ceremonies in Java. Tumpeng is served at landmark events such as birthdays, moving house, or other ceremonies.

Traditionally, Tumpeng is served alongside fried chicken, boiled egg, vegetables, and goat meat on a round plate made from bamboo called besek.

There are various shapes and types, as well as tastes and aromas, from dozens of traditional foods, snacks, and drinks, from various regions in Central Java. All of them represent habits, tastes, as well as a wealth of local ingredients to make them. There may be several similar foods found in other areas, but usually there are certain characteristics that are definitely different.