Minangkabau or abbreviated as Minang refers to cultural and geographical entities characterized by the use of language, customs adhering to a matrilineal kinship system, and Islamic religious identity. Geographically, Minangkabau covers the mainland of West Sumatra, half of mainland Riau, northern Bengkulu, western part of Jambi, west coast of North Sumatra, southwest Aceh, and Negeri Sembilan in Malaysia. In lay conversation, the Minang people are often confused with the Padang people. This refers to the name of the capital city of West Sumatra province, namely Padang City. However, they would usually refer to their group as -Urang Awak- which meant the same as the Minang people themselves.

more..
Minangkabau refers more to the ethnic culture of a Malay family that grows and grows due to the monarchy system and adheres to a customary system characterized by a kinship system through the female or matrilineal route. Thomas Stamford Raffles, after carrying out an expedition to the interior of Minangkabau where the Pagaruyuang Kingdom was domiciled, stated that Minangkabau was the source of strength and origin for the Malay people, whose population later spread widely in the Eastern Islands.

The Minang people survive as the world’s largest matrilineal adherents. In addition, this ethnic group has implemented a proto-democratic system since pre-Hindu times with the existence of customary density to determine important matters and legal issues.

Minangkabau people are very prominent in the field of commerce, as professionals, and intellectuals. They are the heirs of the old tradition of the Malay and Sriwijaya Kingdoms who love to trade and are dynamic. More than half of the total number of members of this community are overseas. The Minang Diaspora generally live in big cities, such as Jakarta, Bandung, Pekanbaru, Medan, Batam, Palembang, Bandar Lampung and Surabaya. Outside the territory of Indonesia, ethnic Minang are concentrated in Kuala Lumpur, Seremban, Singapore, Jeddah, Sydney and Melbourne. The Minang people have a special dish that is popularly known as Padang cuisine which is very popular in Indonesia and even abroad. 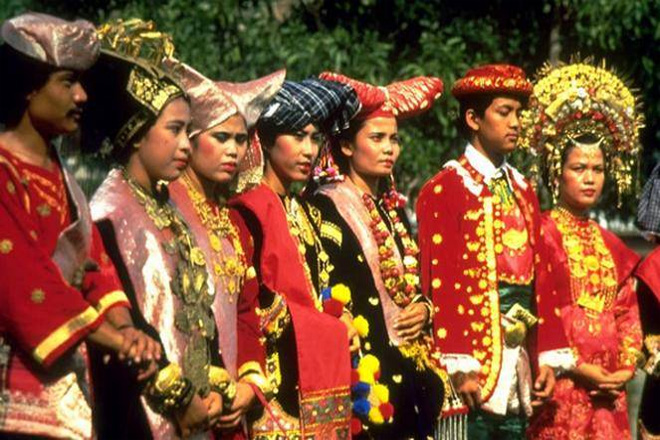 The first Minangkabau are said to have arrived by ship and landed on Mount Marapi when it was no bigger than the size of an egg, which protruded from a surrounding body of water. After the waters receded the Minangkabau proliferated and dispersed to the slopes and valleys surrounding the volcano, a region called the darek. The darek is composed of three luhak – Tanah Datar, Agam and Limapuluh Koto. The tambo claims the ship was sailed by a descendant of Alexander the Great (Iskandar Zulkarnain). 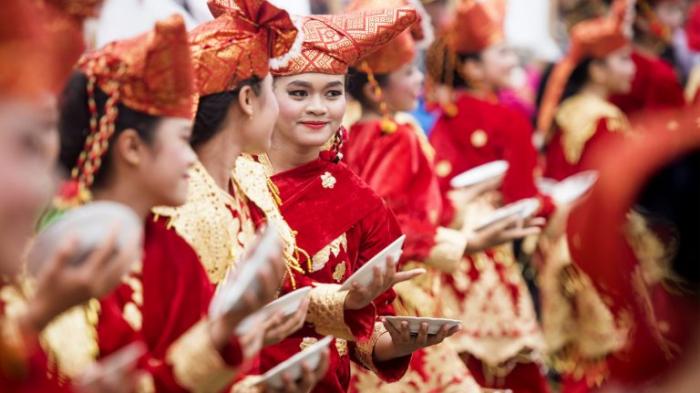 A division in Minangkabau adat into two systems is said to be the result of conflict between two half-brothers Datuak Katumangguangan and Datuak Parpatiah nan Sabatang, who were the leaders who formulated the foundations of Minangkabau adat. The former accepted Adityawarman, a prince from Majapahit, as a king while the latter considered him a minister, and a civil war ensued.

The Bodi Caniago/Adat perpatih system formulated by Datuak Parpatiah nan Sabatang is based upon egalitarian principles with all panghulu (clan chiefs) being equal while the Koto Piliang /Adat Katumangguangan system is more autocratic with there being a hierarchy of panghulu.

Each village (nagari) in the darek was an autonomous “republic”, and governed independently of the Minangkabau kings using one of the two adat systems. After the darek was settled, new outside settlements were created and ruled using the Koto Piliang system by rajo who were representatives of the king. 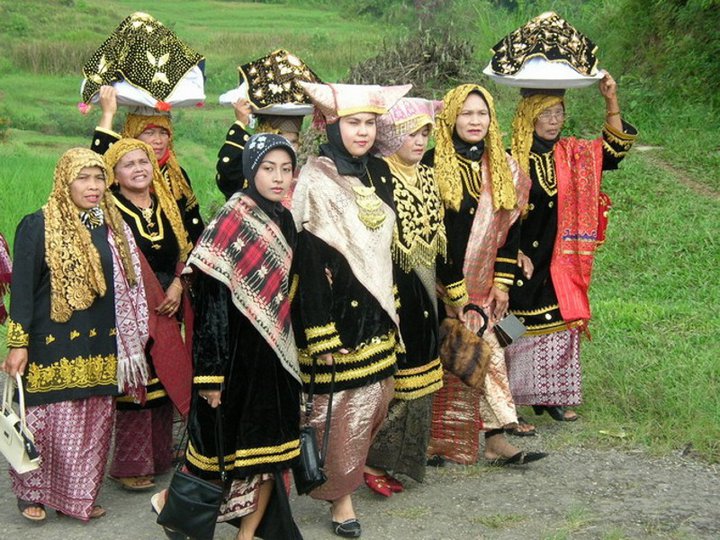 Minangkabau have large corporate descent groups, but they traditionally reckon descent matrilineally. A young boy, for instance, has his primary responsibility to his mother’s and sisters’ clans. It is considered “customary” and ideal for married sisters to remain in their parental home, with their husbands having a sort of visiting status. Not everyone lives up to this ideal, however.

In the 1990s, anthropologist Evelyn Blackwood studied a relatively conservative village in Sumatra Barat where only about 22 percent of the households were “matrihouses”, consisting of a mother and a married daughter or daughters. Nonetheless, there is a shared ideal among Minangkabau in which sisters and unmarried lineage members try to live close to one another or even in the same house.

Landholding is one of the crucial functions of the suku (female lineage unit). Because Minangkabau men, like Acehnese men, often migrate to seek experience, wealth, and commercial success, the women’s kin group is responsible for maintaining the continuity of the family and the distribution and cultivation of the land. These family groups, however, are typically led by a penghulu (headman), elected by groups of lineage leaders. 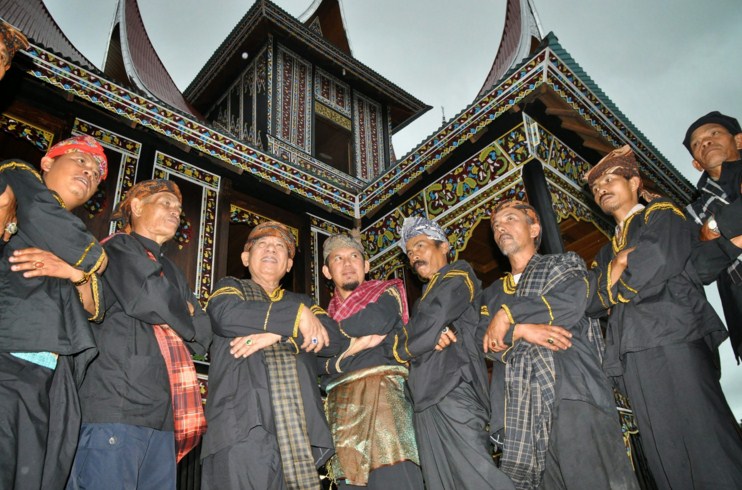 With the agrarian base of the Minangkabau economy in decline, the suku—as a landholding unit—has also been declining somewhat in importance, especially in urban areas. Indeed, the position of penghulu is not always filled after the death of the incumbent, particularly if lineage members are not willing to bear the expense of the ceremony required to install a new penghulu.

The Minangkabau (in short Minang) are also known for their devotion to Islam. A dominant majority of both males and females pray five times a day, fast during the month of Ramadan, and express the desire to make the holy pilgrimage (Hajj) to Mecca at least once in their lifetime. Each Minangkabau neighbourhood has a Musalla, which means “a temporary place of prayer” in Arabic but in Indonesia simply means a mosque. In the neighbourhood Musalla, men and women pray together, although separated into their respective gender-designated sections. A high percentage of women and girls wear the headscarf. 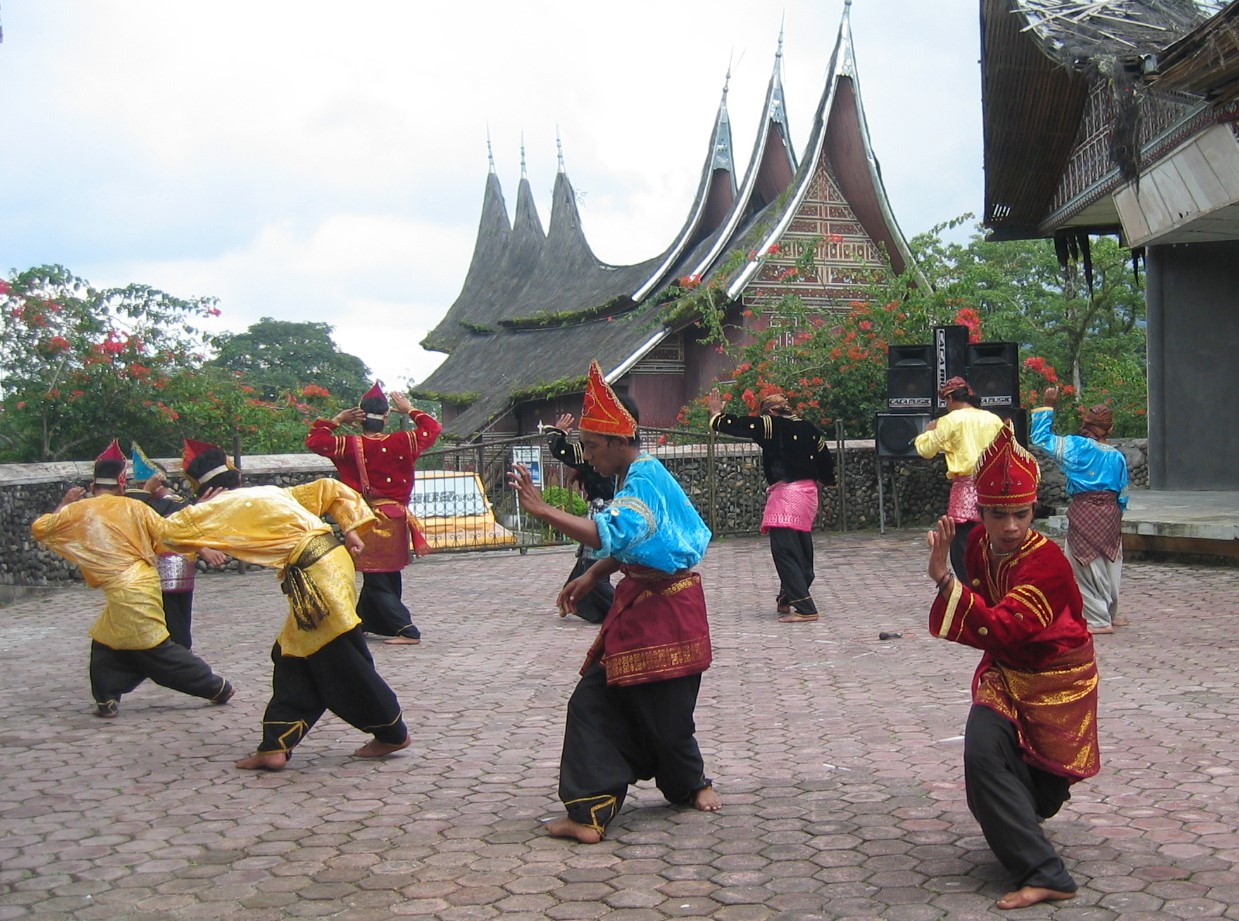 As early as the age of 7, boys traditionally leave their homes and live in a surau (traditionally: the house of men of a village where the boys learn from older men reading, reciting qur’an, simple math, and other survival skills) to learn religious and cultural (adat) teachings. At the surau during night time (after the Isyak prayers), these youngsters are taught the traditional Minankabau art of self-defence, which is Silek, or Silat in Malay.

When they are teenagers, they are encouraged to leave their hometown to learn from schools or from experiences out of their hometown so that when they are adults they can return home wise and ‘useful’ for the society and can contribute their thinking and experience to run the family or nagari (hometown) when they sit as the member of ‘council of uncles’.

This tradition has created Minang communities in many Indonesian cities and towns, which nevertheless are still tied closely to their homeland; a state in Malaysia named Negeri Sembilan especially is heavily influenced by Minang culture because Negeri Sembilan was originally Minangkabau’s colony. By acquiring property and education through merantau experience, a young man can attempt to influence his own destiny in positive ways.

There are many of traditional celebrations of Minangkabau Peaople, which are rooted in customs and or religion, to commemorate events and to continue to activate the spirit of the values of goodness. 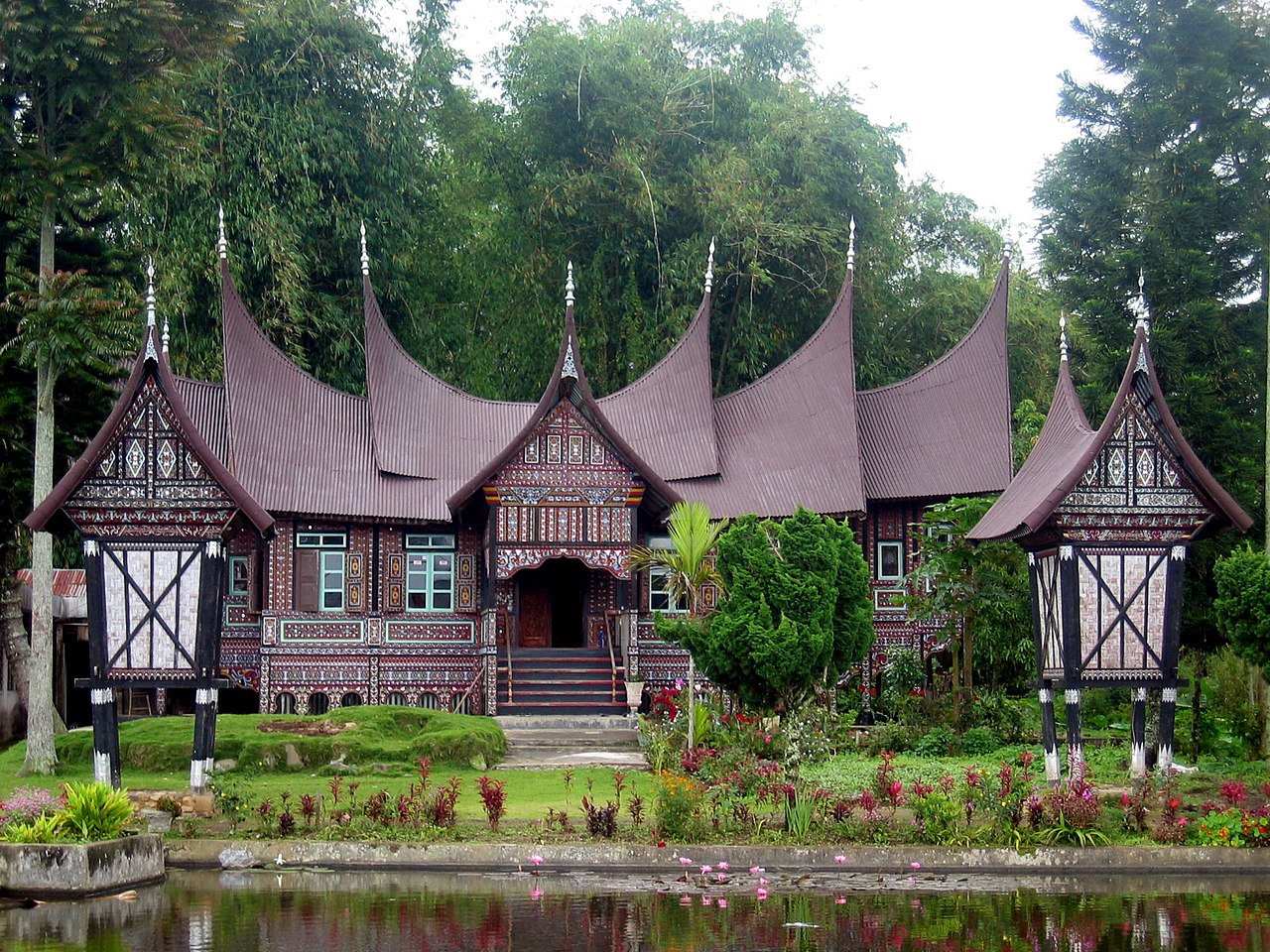 A rumah gadang serves as a residence, a hall for family meetings, and for ceremonial activities. The rumah gadang is owned by the women of the family who live there – ownership is passed from mother to daughter.

The houses have dramatic curved roof structures with multi-tiered, upswept gables. They are also well distinguished by their rooflines which curve upward from the middle and end in points, in imitation of the upward-curving horns of the water buffalo that supposedly eked the people their name (i.e. “victors of the buffalo”).

Shuttered windows are built into walls incised with profuse painted floral carvings. The term rumah gadang usually refers to the larger communal homes, however, smaller single residences share many of its architectural elements.

Randai is a folk theatre tradition which incorporates music, singing, dance, drama and the silat martial art. Randai is usually performed for traditional ceremonies and festivals, and complex stories may span a number of nights. It is performed as a theatre-in-the-round to achieve an equality and unity between audience members and the performers.

There are, recorded here, 13 traditional dances of Minangkabau. Traditional dance that expresses feelings, behavior and enthusiasm, which was created by the ancestors. 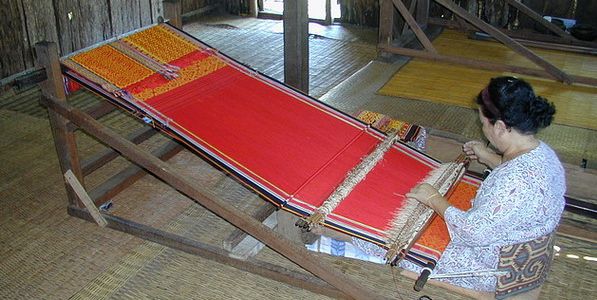 Randai performances are a synthesis of alternating martial arts dances, songs, and acted scenes. Stories are delivered by the acting and singing and are mostly based upon Minangkabau legends and folktales. Randai originated early in the 20th century out of fusion of local martial arts, storytelling and other performance traditions. Men originally played male and female characters in the story but, since the 1960s, women have participated. 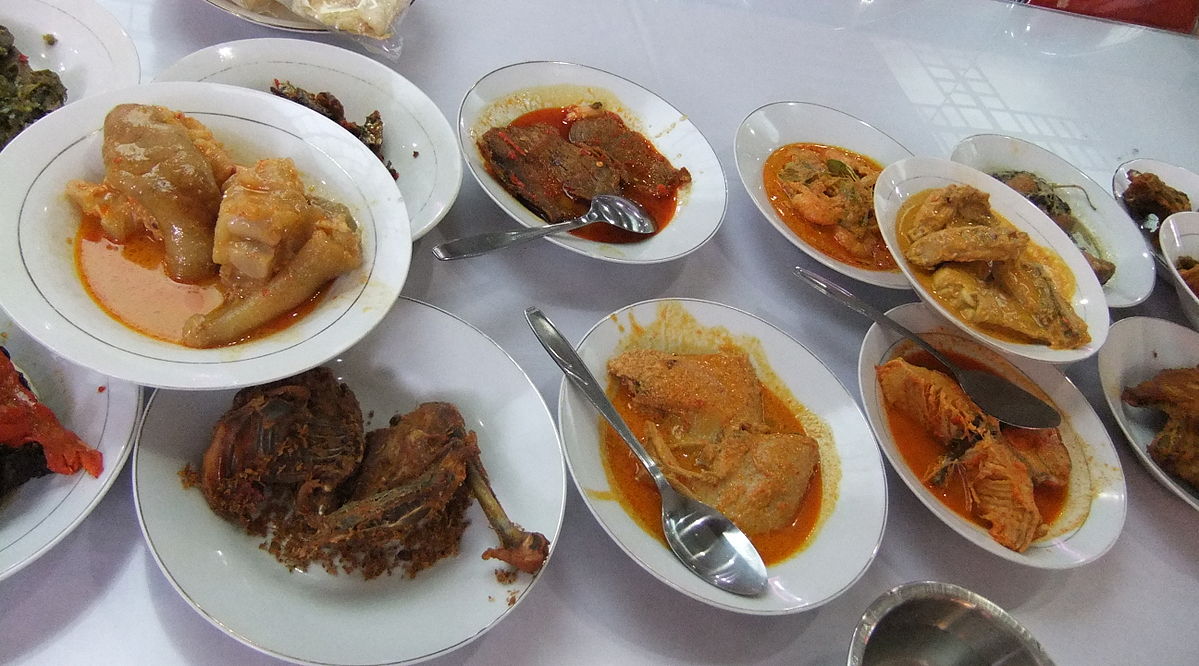 The staple ingredients of the Minangkabau diet are rice, fish, coconut, green leafy vegetables and chili. Meat is mainly limited to special occasions, and beef and chicken are most commonly used. Pork is not halal and not consumed, while lamb, goat and game are rarely consumed for reasons of taste and availability. 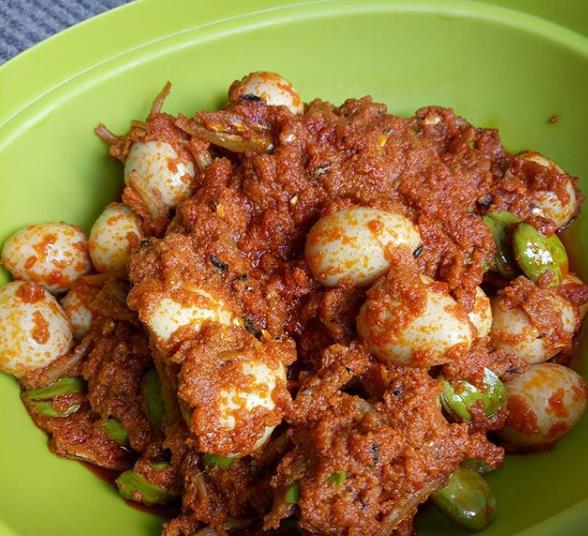 Spiciness is a characteristic of Minangkabau food: The most commonly used herbs and spices are chili, turmeric, ginger and galangal. Vegetables are consumed two or three times a day. Fruits are mainly seasonal, although fruits such as banana, papaya and citrus are continually available.

Three meals a day are typical with lunch being the most important, except during the fasting month of Ramadan when lunch is not eaten. Meals commonly consist of steamed rice, a hot fried dish and a coconut milk dish, with a little variation from breakfast to dinner. Meals are generally eaten from a plate using the fingers of the right hand. Snacks are more frequently eaten by people in urban areas than in villages. Western food has had little impact upon Minangkabau consumption and preference.

Rendang is a dish which is considered to be a characteristic of Minangkabau culture; it is cooked 4–5 times a year. This particular dish is one of the world’s renowned dish, especially after crowned the Best Food in CNN’s World’s 50 Best Foods in 2011 and 2017 by a CNN poll. Other characteristic dishes include Asam Padeh, Soto Padang, Sate Padang, Dendeng Balado (beef with chili sauce). 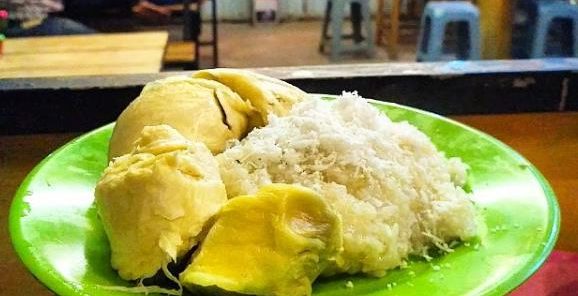 Food has a central role in the Minangkabau ceremonies which honour religious and life-cycle rites.

Minangkabau food is popular among Indonesians and restaurants are present throughout Indonesia. Nasi Padang restaurants, named after the capital of West Sumatra, are known for placing a variety of Minangkabau dishes on a customer’s tablewith rice and billing only for what is taken. Nasi Kapau is another restaurant variant which specialises in dishes using offal and tamarind to add a sourness to the spicy flavour.

There are various shapes and types, as well as tastes and aromas, from dozens of traditional foods, snacks, and drinks, from various regions of Minangkabau People. All of them represent habits, tastes, as well as a wealth of local ingredients to make them. There may be several similar foods found in other areas, but usually there are certain characteristics that are definitely different.