West Kalimantan (Indonesian: Kalimantan Barat) is a province of Indonesia. It is one of five Indonesian provinces in Kalimantan, the Indonesian part of the island of Borneo. Its capital city is Pontianak. The province has an area of 147,307 km² with a recorded population of 5,069,127 at the 2019 Census. Ethnic groups include the Dayak, Malay, Chinese, Javanese, Buginese, and Madurese.

West Kalimantan is an area that could be dubbed “The Province of a Thousand Rivers”. The nickname is aligned with the geographical conditions that have hundreds of large and small rivers that which can be and often are navigable. Several major rivers are still the main route for freight to the hinterland, despite road infrastructure now reaching most districts.

Although a small part of West Kalimantan region is sea water, West Kalimantan has dozens of large and small islands (mostly uninhabited) spread along the Karimata Strait and Natuna Sea that borders the province of Riau Islands. The total population in the province, according to the 2000 census totaled 4,073,430 inhabitants (1.85% of Indonesia’s population) but by 2019 it had reached 5,069,700. 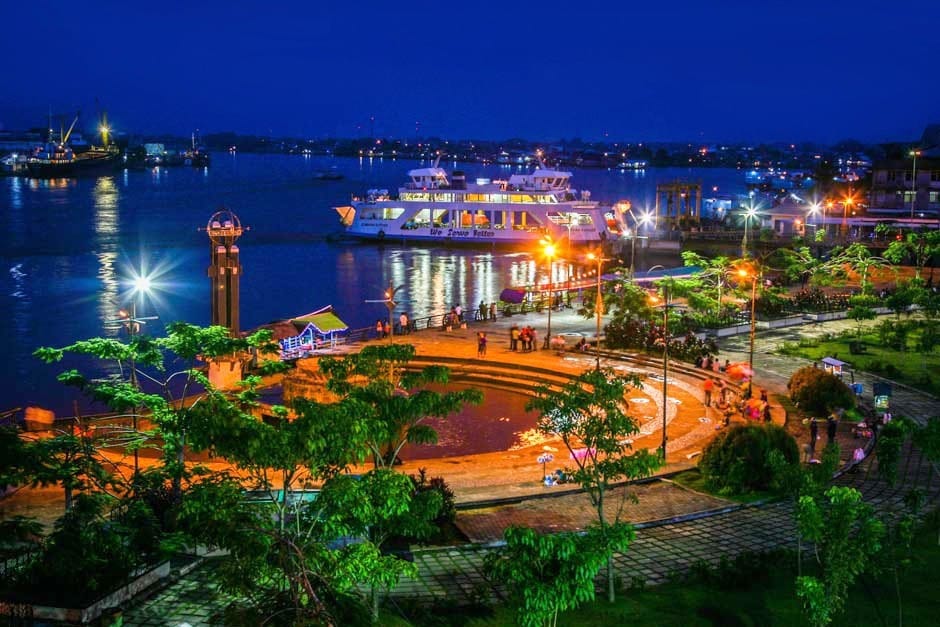 West Kalimantan Province is located in the western part of the island of Borneo, or in between the lines 2°08’N and 3°05’S and between 108°0’E and 114°10’E. The province is traversed by the Equator (latitude 0°), precisely through the city of Pontianak. West Kalimantan has a tropical climate, with often high temperatures accompanied by high humidity.

Other specific characteristics is that the West Kalimantan region including one of the provinces in Indonesia which is directly adjacent to another country on land, namely the State of Sarawak, East Malaysia.

Even with this position, West Kalimantan is currently the only province in Indonesia that have officially had access road to get in and out of a neighboring country. 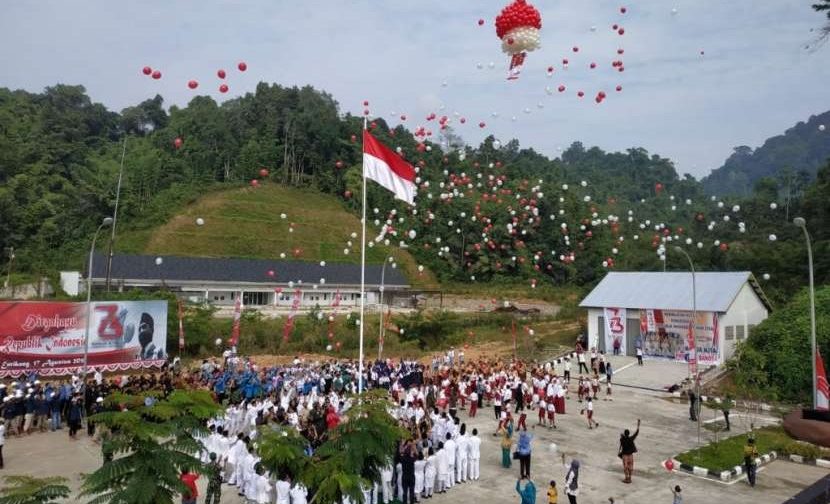 West Kalimantan and Sarawak have open roads approximately 400 km long, spanning Pontianak-Entikong-Kuching (Sarawak, Malaysia) and can be reached about six to eight hours of travel. In the northern part of the province, there are four regencies that directly borders Malaysia, namely Sambas, Sanggau, Sintang and Kapuas Hulu, which stretch along the Kalingkang Mountains-Kapuas Hulu.

Most areas of West Kalimantan is a low-lying land with an area of 146 807 km2, or 7.53 percent of the total Indonesian or 1.13 times the size of the island of Java. This region stretches straight from north to south along more than 600 km and about 850 km from West to East. Judging from the size of the territory, West Kalimantan is Indonesia’s third largest province by area, after Papua (421,891 km2) and Central Kalimantan (152 600 km2). 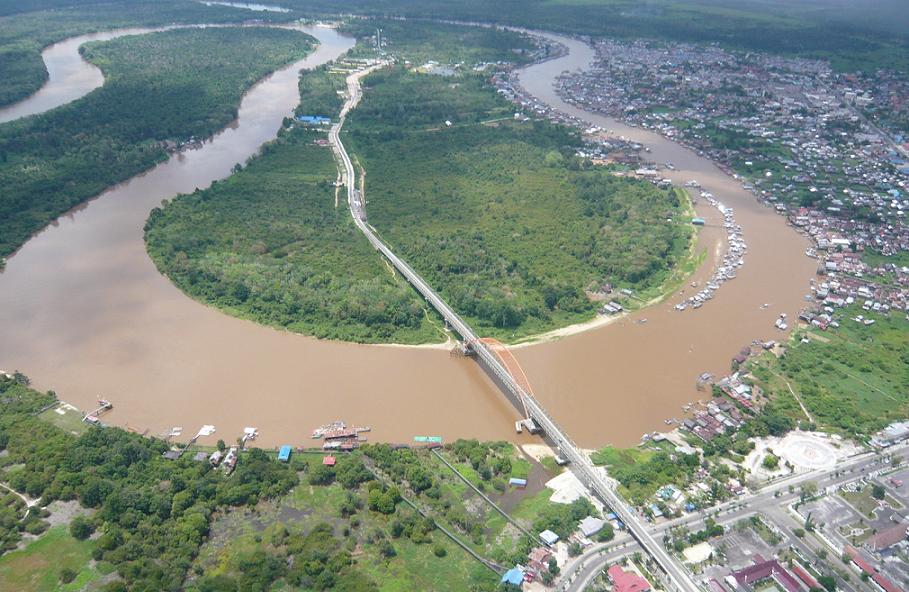 In general, West Kalimantan land is low-lying and has hundreds of rivers are safe when navigable, slightly hilly which extend from west to east along the valley Kapuas and Natuna Sea / Strait Karimata. Most of the land area is swampy mix of peat and mangrove forests.

Judging from the soil texture, the majority of West Kalimantan area consists of the soil type PMK (podsolet red-yellow), which covers an area of about 10.5 million hectares, or 17.28 percent of the total area of 14.7 million hectares.

Next, the ground OGH (orgosol, gley and humus) and the alluvial soil of about 2.0 million hectares, or 10.29 percent sprawled across Dati II, but most likely in the coastal district.

Influenced by the vast lowlands, the heights of the mountains are relatively low as well as non-active. The highest mountain is Mount Baturaya in District Serawai, Sintang which has an altitude of 2,278 meters above sea level, far lower than Mount Semeru (East Java, 3,676 meters) or Mount Kerinci (Jambi, 3,805 meters).

Mount Lawit located in Kapuas Hulu, district. Embaloh Hulu and more formerly known in West Kalimantan, only occupies the third highest because it has a high 1,767 meters, while the second highest is Mount Batusambung (Subdistrict Ambalau) with a height of up to 1,770 meters. 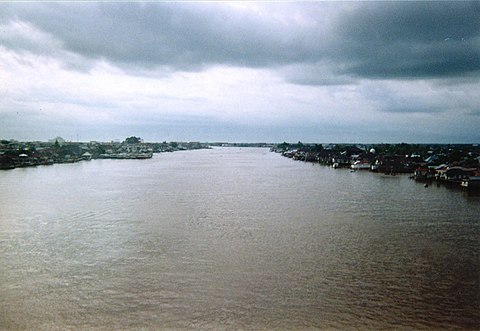 West Kalimantan is an area that could be called “The Thousand Rivers Province”. The nickname is in line with the geographical conditions that have hundreds of large and small rivers, among others, can be and often are navigable. 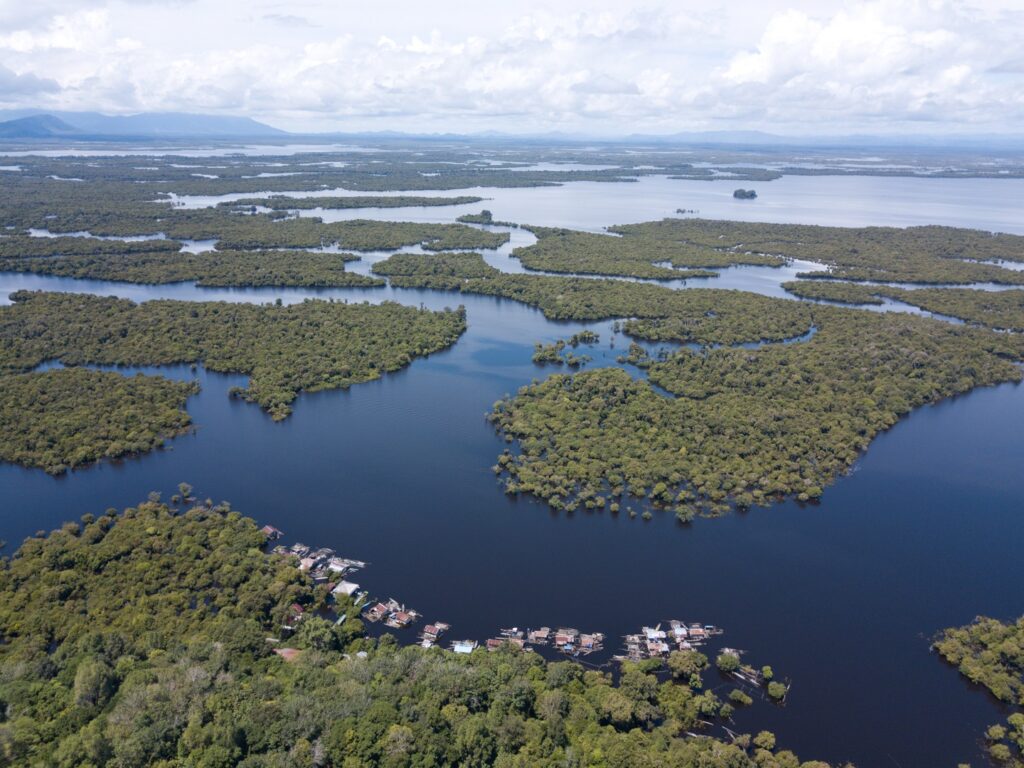 Several major rivers is still the lifeblood and main line to transport the countryside, although the road infrastructure has been able to reach most districts.

Although rivers have very prominent numbers in West Kalimantan, there are only two significant lakes in the province. Both lakes are Lake Sentarum and Lake Luar I that are in Kapuas Hulu. Lake Sentarum, has an area of 117,500 hectares, which sometimes is almost dry in the dry season, and Lake Luar I, which has an area of approximately 5,400 hectares. Both of these lakes have potential as a tourist attraction. 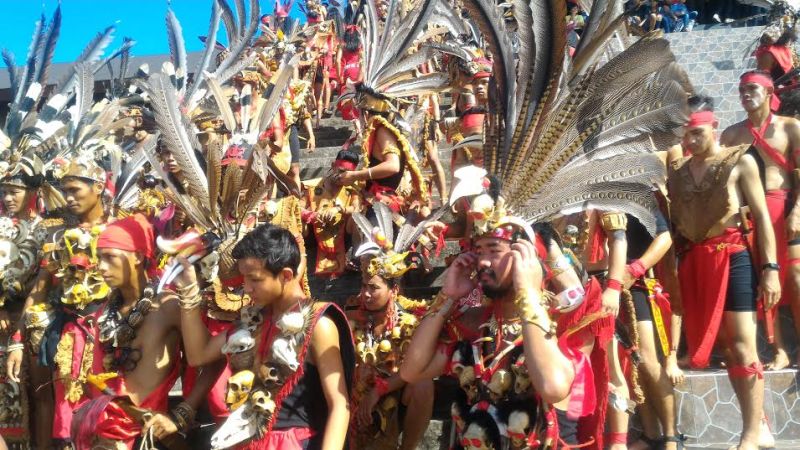 The largest ethnic groups in West Kalimantan are the Dayak (34.93%) and Malays (33.84%). The Dayaks are tribes in the hinterland, while the ethnic Malay majority live in the coastal areas.

The third largest ethnic group is the Javanese (9.74%), who live mainly in areas of transmigration. In fourth place are the ethnic Chinese (8.17%), who are largely found in urban areas such as Singkawang and Pontianak. 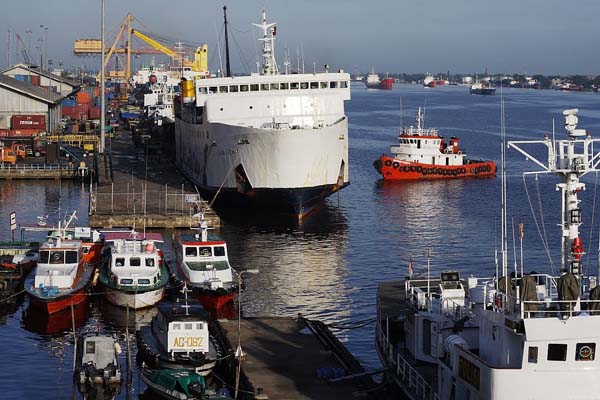 Indonesian is a language commonly used by people in West Kalimantan. Besides language interface, namely Pontianak Malay, Sambas Malay and Senganan language distribution by region. Likewise, there are various types of Dayak languages, According to the Institute’s research Dayakologi 188 dialects are spoken by the Dayak and Chinese languages such as Teochew and Khek/Hakka. 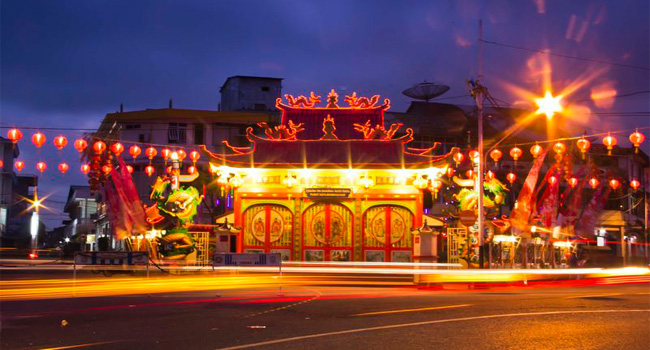 Dialects which are intended to Dayak tribe’s language is so much resemblance to Malay, only the most different at the end of words such as makan (Malay), makatn (Kanayatn), makai (Iban) and makot (Melahui).

Especially for Ot Danum language, the language may be said to stand alone and is not a dialect of other Dayak groups. Dialect, however, lies in some sub Uut Danum Dayak tribe itself. As the sub-tribe language Dohoi for example, to say eat only consist of a minimum of 16 vocabulary, ranging from the most delicate to the most rugged. For example, ngolasut (was fine), germ (general), dekak (for older or respected), ngonahuk (rough), monirak (the rough) and Macuh (for the spirits of the dead). 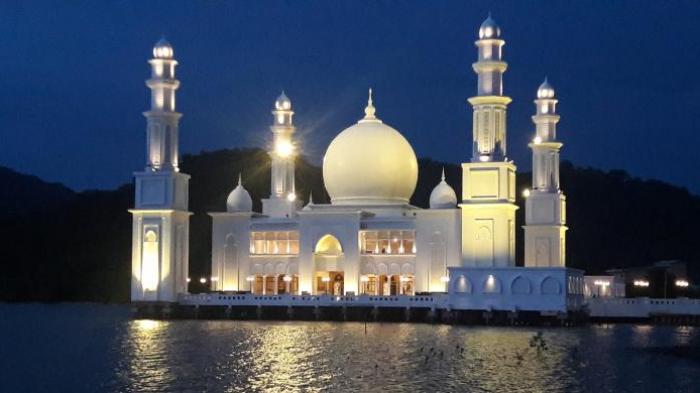 Malay in West Kalimantan consists of several subgroups, including Pontianak Malay, Sambas, Mempawah, Matam and Ketapang. The Sanggau, Sintang and Sekadau Malay spoken in the northern part of the province itself has the same dialect with the language Sarawak Malay; meanwhile Pontianak Malay spoken in the capital is more closely related to the standard Malaysian Malay and Riau Malay. 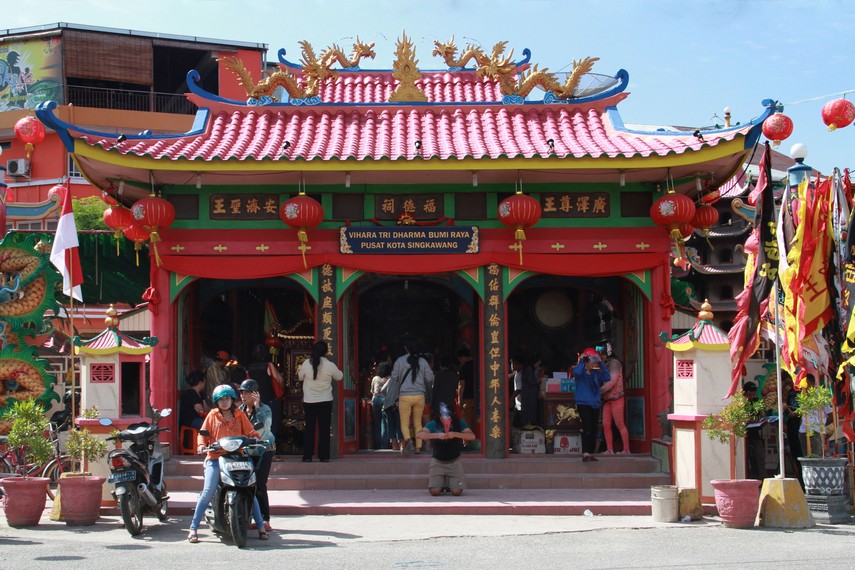 According to the 2010 census majority of people embraced Islam in West Kalimantan (59.22%). Muslim majority areas in West Kalimantan is inhabited coastal regions are majority Malays as Sambas, Mempawah, Ketapang, North Kayong, Kubu Raya, Kapuas Hulu and Pontianak. In Melawi and Singkawang approximately 50% of the population are Muslims.

Islam is also practiced by Javanese, Madurese and Bugis located in West Kalimantan. In rural areas inhabited by the Dayak predominantly Christian as in Bengkayang, Landak, Sanggau, Sintang and Sekadau. The Chinese in the West Kalimantan mostly adheres to Buddhism and Christianity (Catholic / Protestant). 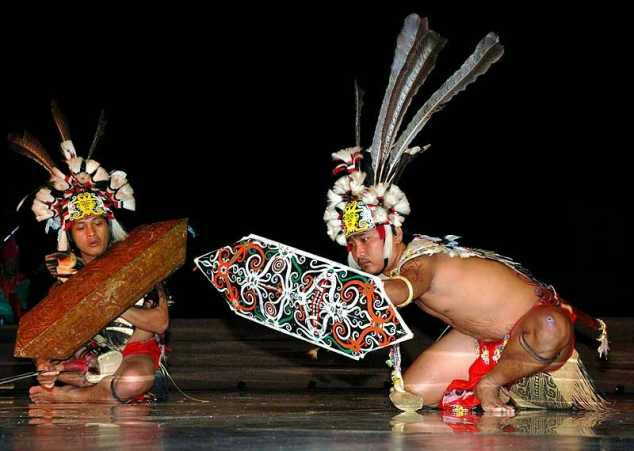 Tari Monong / Manang is a traditional dance of West Kalimantan society. This dance is a healing dance. When there are people who are sick but do not heal, usually the family will hold Tari Monong / Manang. The dancer will act as a shaman healer who issued a special spell. Thus, the patient will be motivated to get better.

Tari Zapin Tembung is a type of is a social dance in the communities of West Kalimantan. Tari Menoreh Getah is traditional dance which describes the motion of life of rural communities in West Kalimantan that meet their daily needs.

Based on the idea that dance is worked by elements of dance movement Malay and Dayak in West Kalimantan. Tari Mandau is a dance which symbolise of the fighting spirit of the Dayak community in defense of the dignity and status. 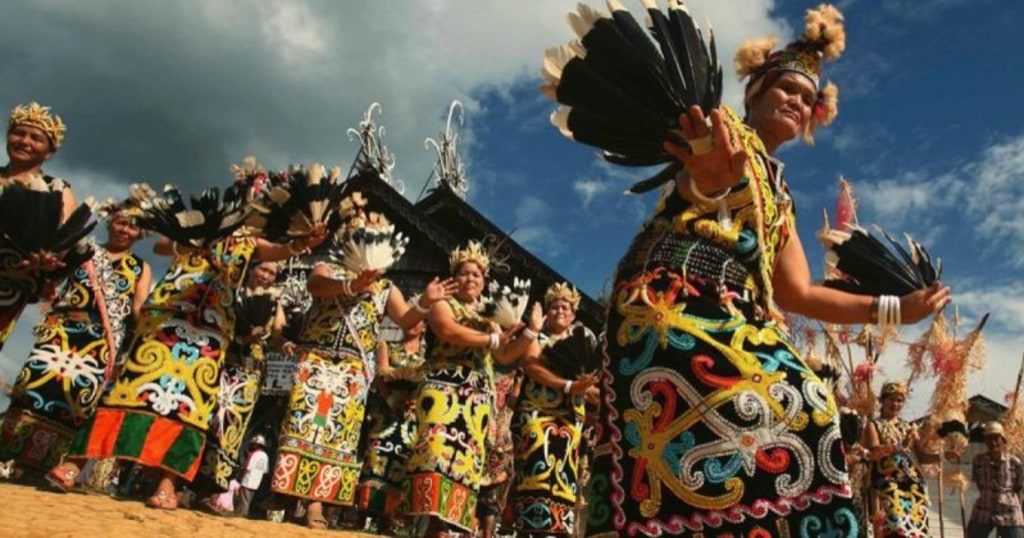 West Kalimantan men wore traditional clothing in the form of headgear decorated with feathers of hornbills, sleeveless shirt (vest), knee-length trousers and fabric that serves as a belt. Usually, West Kalimantan men also wore jewelry, such as a beaded necklace.

Women usually wear cloth covering the chest, as well as layers of fabrics which serves as setagen and woven fabrics. Jewelry worn in the form of hornbill feathers as a headdress, beaded necklace and bracelet on the arm. This custom clothing comes from the Dayak tribe. 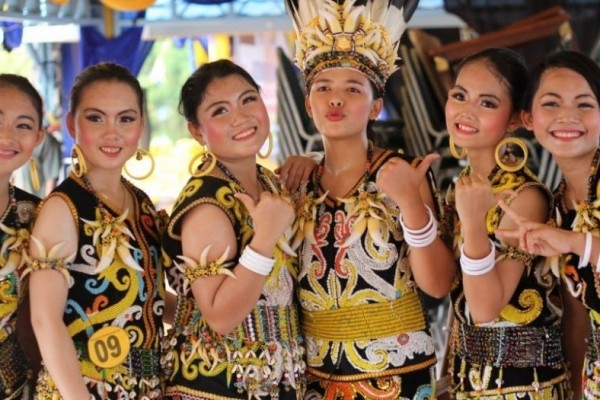 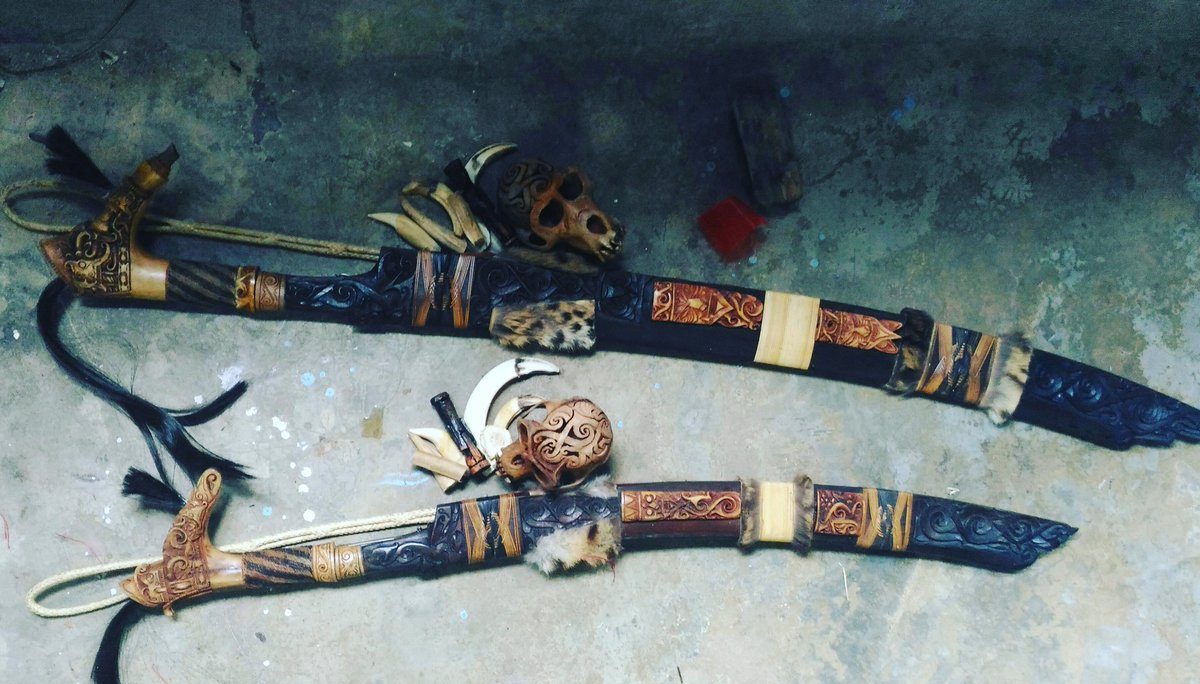 Mandau is a traditional weapon commonly used by people in West Kalimantan. Mandau is a kind of machete and some Mandau are used for everyday purposes. Other weapons are a shield, blowgun, spear, and sickle.

Mandau is used for the purposes of war, decorated with human hair as a symbol of courage. The shield, which is called Kelikit has a size of a full-sized man with ornate carvings in black and red. Other weapons are blowpipe with arrows tipped with poison sap of a tree called ipoh. 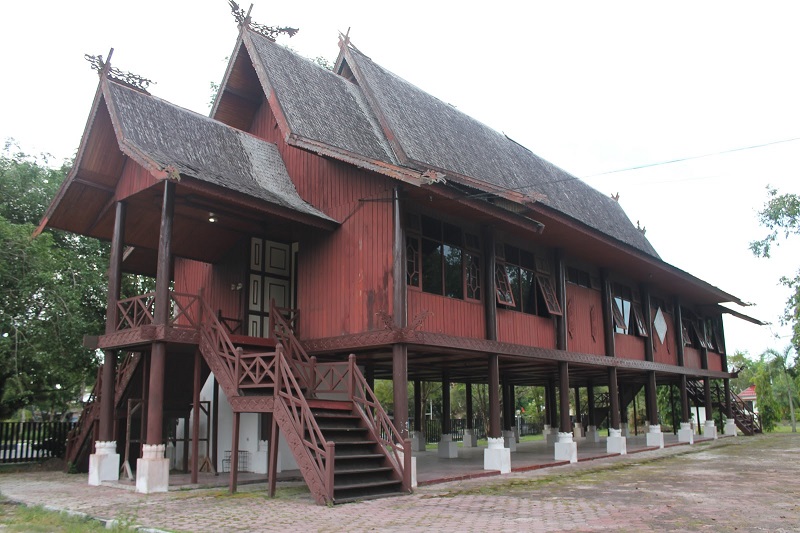 One of the cultural house in West Kalimantan is called “Rumah Panjang” (longhouse) because its size length and made of wood. 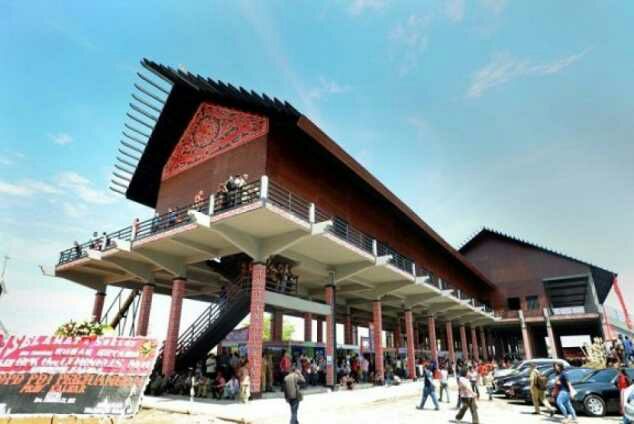 This house is the residence of the Dayak tribe, the function of this custom home is actually a place to stay for a couple of heads of families and also usually used for meetings.

They can also be found in other provinces of Kalimantan as well as the neighboring Sarawak in Malaysia. 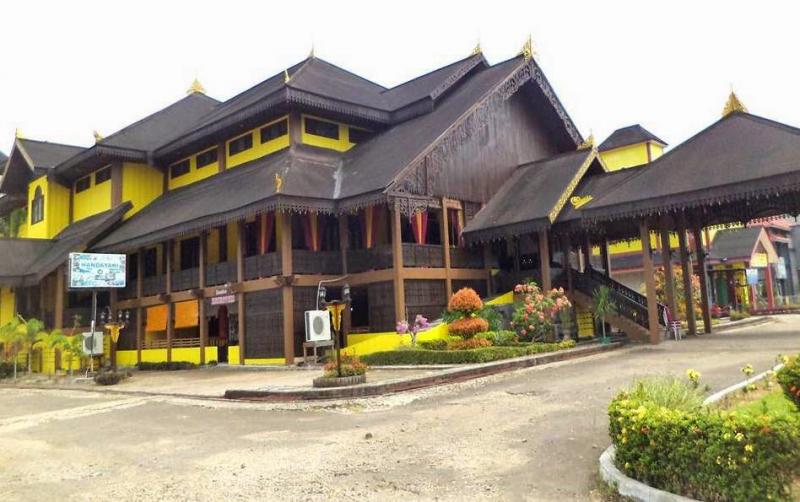 “Rumah Radakng” which is also a kind of longhouse located in Pontianak and the surrounding area. This house has a length of approximately 380 meters high and 7 meters including the most luxurious custom home in West Kalimantan in the meantime.

“Rumah Batok” is a traditional house that is owned by the Dayak tribe Badayuh, this house has a unique shape because it has a round shape and height of up to approximately 12 meters to the top.

Malay traditional house is a house owned by ethnic Malays, which is located in the city of Pontianak. This traditional houses are usually used as a place of deliberation, performing arts, wedding place citizens and other events. 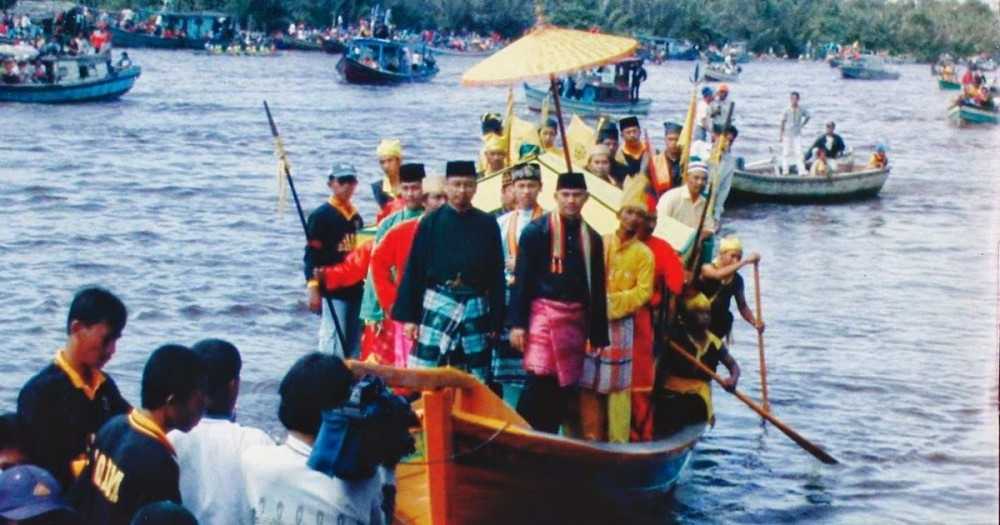 Robo-robo tradition. Robo-robo derived from the Robo or Rabu (Wednesday). Robo-Robo tradition held on the last Wednesday of Safar based on the Islamic Calendar, which symbolizes a blessing. According to the story, this rite is a warning or trail the arrival of Prince Mas Surya Negara of the Kingdom Matan (Martapura) to the Kingdom of Mempawah (Pontianak). 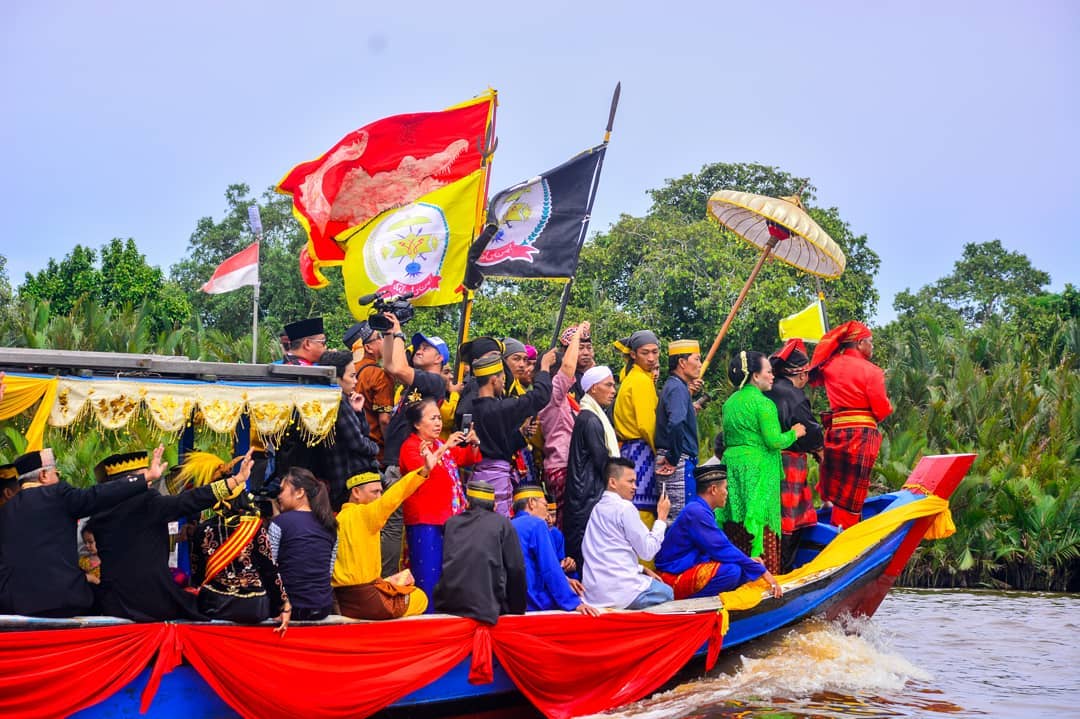 The ritual begins when the King, Queen Mempawah, sons and daughters and the retainer and the guard departed from Castle Village, Mempawah use bidar boat, the boat kingdom of Amantubillah Palace. The ship will sail to the mouth of the River Mempawah located in the village of Kuala Mempawah with the distance of about one hour. 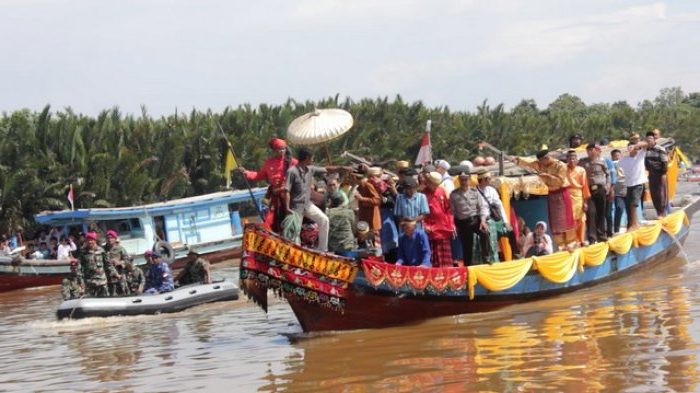 Robo-robo itself was intended as a warning Haulan series of important events began on Monday night to Tuesday, the last month of Safar to commemorate the death of Opu Daeng Manambun.

For the citizens of Bugis descent in the ordinance, robo-robo usually celebrated with family meals at home. Not only at home, eating together also carried students in various schools both elementary to high school on Wednesday morning.

There are various shapes and types, as well as tastes and aromas, from dozens of traditional foods, snacks, and drinks, from various regions in West Kalimantan province. All of them represent habits, tastes, as well as a wealth of local ingredients to make them. There may be several similar foods found in other areas, but usually there are certain characteristics that are definitely different. 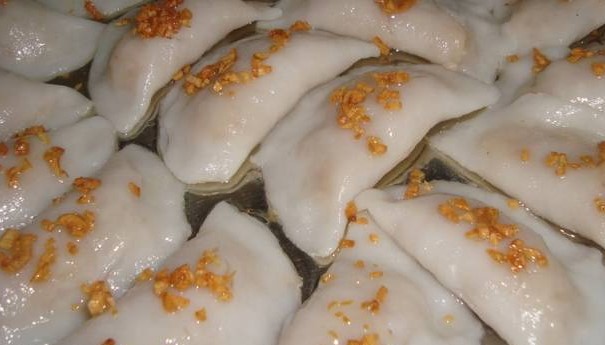 Visiting the West Kalimantan area, not only finding interesting and beautiful tourist attractions, but this province has a wide variety of distinctive culinary delights that are quite well known and interesting to try.