The Sundanese (Sundanese: ᮅᮛᮀ ᮞᮥᮔ᮪ᮓ, Urang Sunda) are an Austronesian ethnic group native to the western part of the island of Java in Indonesia. They number approximately 40 million and form Indonesia’s second most populous ethnic group, after the neighbouring Javanese. In their language, Sundanese, the Sundanese refer to themselves as Urang Sunda (Sundanese: Sunda people), while Orang Sunda or Suku Sunda is its Indonesian equivalent.
more..
Before the arrival of Hinduism and Islam, Sunda Wiwitan is a religious belief system of traditional Sundanese. It venerates the power of nature and the spirit of ancestors (animism and dynamism).

The Sundanese have traditionally been concentrated in the provinces of West Java, Banten, Jakarta, and the western part of Central Java. Sundanese migrants can also be found in Lampung and South Sumatra, and to a lesser extent in Central Java and East Java. 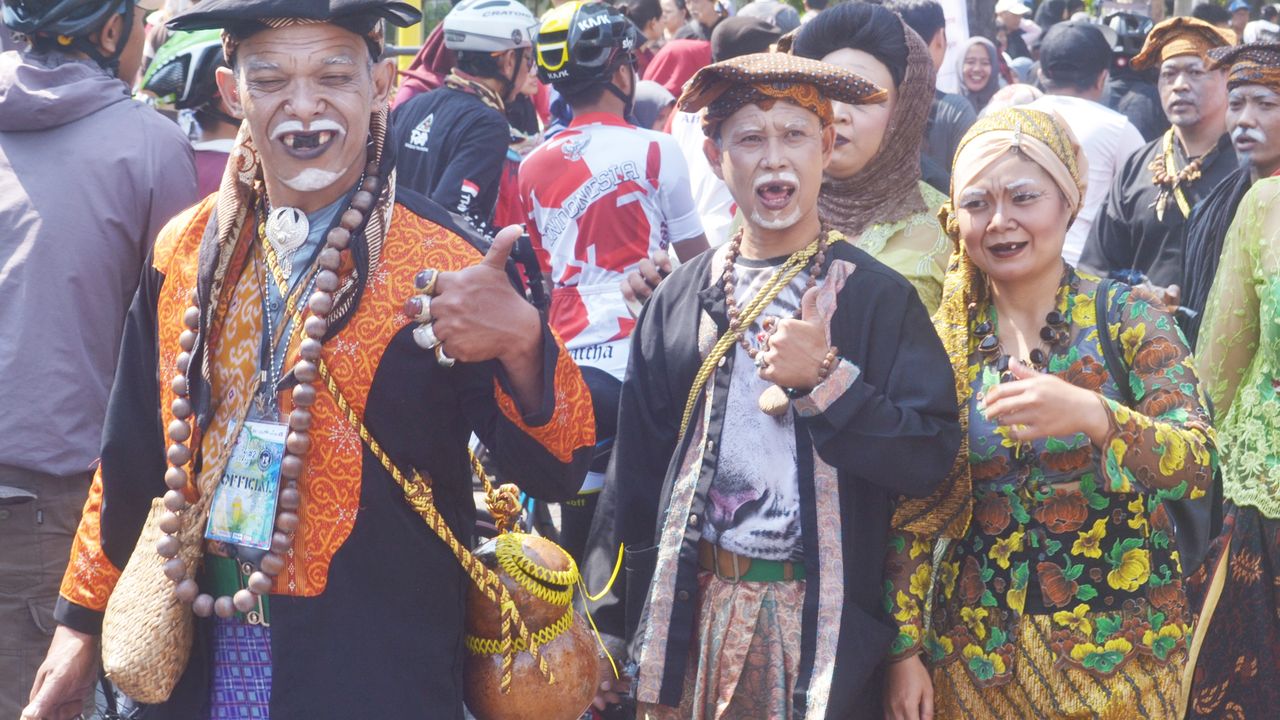 Sundanese culture has borrowed much from Javanese culture. However, it differs by a much less rigid system of social hierarchy. The Sundanese, in their mentality and behaviour, their greater egalitarianism and antipathy to yawning class distinctions, and their community-based material culture, differ from the feudal hierarchy apparent among the people of Javanese principalities. Central Javanese court culture nurtured in an atmosphere conducive to elite, stylised, impeccably-polished forms of art and literature. In a pure sense, Sundanese culture bore few traces of these traditions.

Culturally, the Sundanese people adopt a bilateral kinship system, with male and female descent are of equal importance. In Sundanese families, the important rituals revolved around life cycles, from birth to death, adopting many of the previous Animist and Hindu-Buddhist, as well as Islamic traditions. For example, during the seventh month of a pregnancy, there is a prenatal ritual called Nujuh Bulanan (identical to Naloni Mitoni in Javanese tradition) which traces its origins to Hindu ritual. Shortly after the birth of a baby, a ritual called Akekahan (from Arabic word: Aqiqah) is performed; an Islamic tradition in which the parents slaughter a goat for a baby girl or two goats for a baby boy, the meat later being cooked and distributed to relatives and neighbours. The circumcision ceremony is performed on pre-pubescent boys and celebrated with Sisingaan (lion) dance. 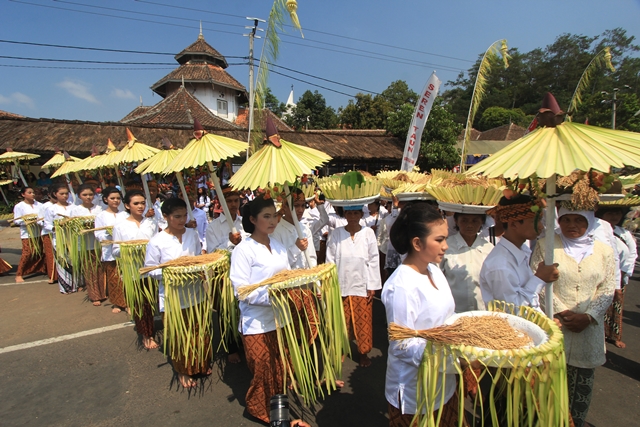 Huap lingkung (bride and groom feed each other by hand, with arms entwined to symbolize love and affection), bakakak hayam (bride and groom ripping a grilled chicken through holding each of its leg; a traditional way to determine which one will dominate the family which is the one that get the larger or head part), and the wedding feast inviting whole family and business relatives, neighbours, and friends as guests.

Death in a Sundanese family usually performed through a series of rituals in accordance with traditional Islam, such as the pengajian (reciting Al Quran) including providing berkat (rice box with side dishes) for guests. The Quran recitation is performed daily, from the day of death through the seventh day following; later performed again on the 40th day, a year, and 1,000th day after the passing. This tradition today, however, is not always closely and faithfully followed since growing numbers of Sundanese are adopting a less traditional Islam which does not maintain many of the older traditions.

Above are pictures of various types of traditional Sundanese traditional clothes, the usage of which is different from one another, both for men and women, or for special conditions and / or events, or, among other things, showing differences in social status (in the past , not the present era) who wear it. 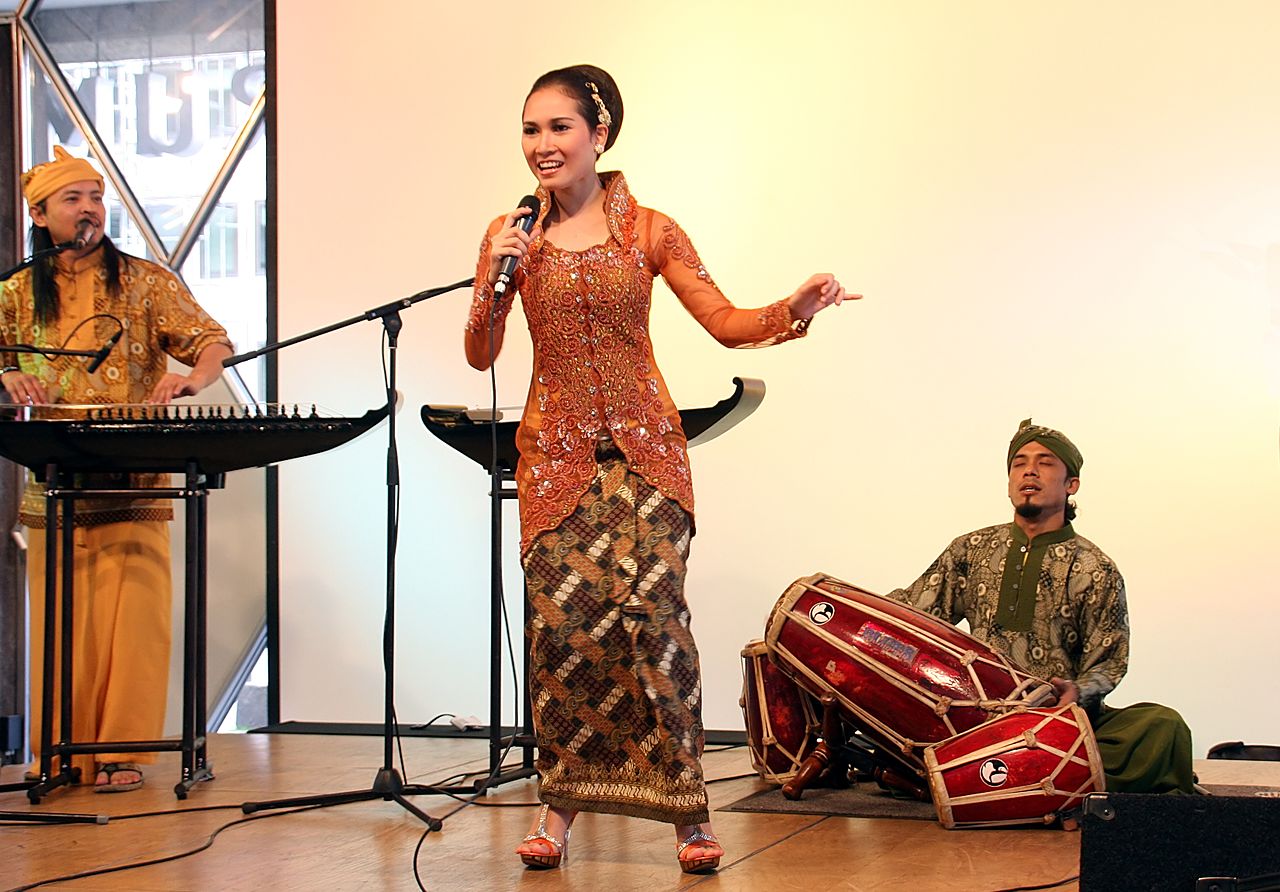 Sundanese literature was basically oral. Their arts (such as architecture, music, dance, textiles, ceremonies) substantially preserved traditions from an earlier phase of civilization, stretching back even to the Neolithic, and never overwhelmed (as eastward, in Java) by aristocratic Hindu-Buddhist ideas. The art and culture of Sundanese people reflect historical influences by various cultures that include prehistoric native animism and shamanism traditions, ancient Hindu-Buddhist heritage, and Islamic culture.

The Sundanese have very vivid, orally-transmitted memories of the grand era of the Sunda Kingdom. The oral tradition of Sundanese people is called Pantun Sunda, a chant of poetic verses employed for story-telling. It is the counterpart of the Javanese tembang, similar to but independent from Malay pantun. The Pantun Sunda often recount Sundanese folklore and legends such as Sangkuriang, Lutung Kasarung, Ciung Wanara, Mundinglaya Dikusumah, the tales of King Siliwangi, and popular children’s folk stories such as Si Leungli.

There are Sundanese traditional dances recorded here. Traditional dance that expresses feelings, behavior and enthusiasm, which was created by the ancestors. 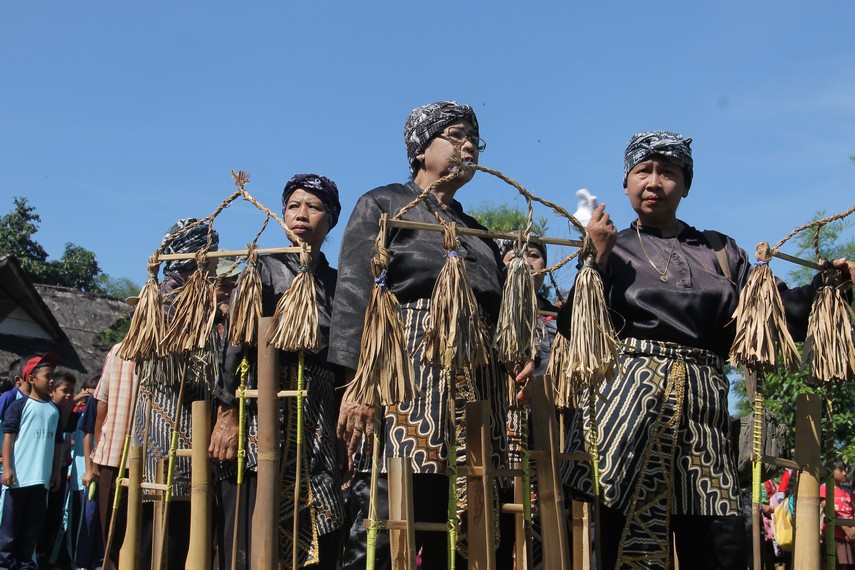 The most well known and distinctive Sundanese dances are Jaipongan, a traditional social dance which is usually, but mistakenly, associated with eroticism. Other popular dances such as Merak dance describe colourful dancing peafowls. Sisingaan dance is performed mainly in the Subang area to celebrate the circumcision ritual where the boy is seated upon a lion figure carried by four men. Other dances such as the Peafowl dance, Dewi dance and Ratu Graeni dance shows Javanese Mataram courtly influences.

Wayang golek puppetry is the most popular wayang performance for Sundanese people. Many forms of kejawen dance, literature, gamelan music and shadow puppetry (wayang kulit) derive from the Javanese. Sundanese puppetry is more influenced by Islamic folklore than the influence of Indian epics present in Javanese versions.

The Pencak silat martial art in Sundanese tradition can be traced to the historical figure King Siliwangi of Sunda Pajajaran kingdom, with Cimande is one of the most prominent school. The recently developed Tarung Derajat is also a popular martial art in West Java. Kujang is the traditional weapon of the Sundanese people.

There are about dozens of traditional celebrations consistently and done in Sundanese customs, which are rooted in customs and or religion, to commemorate events and to continue to activate the spirit of the values of goodness.
0
Religion and Belief
0
dialects of language
0
(million) Population 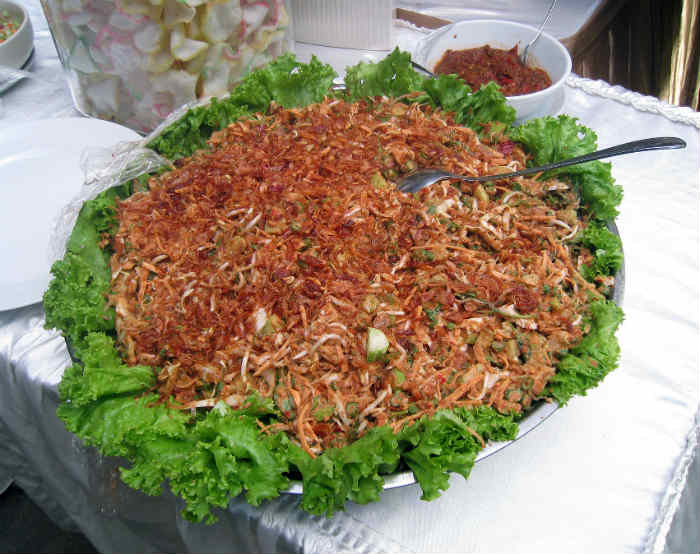 Sundanese cuisine (Sundanese script Raw: ᮙᮞᮊᮔ᮪ ᮞᮥᮔ᮪ᮓ) is the cuisine of the Sundanese people in West Java and Banten, Indonesia. This is one of the most popular foods in Indonesia. Sundanese food is characterized by the freshness of its ingredients, lalap is known to be eaten with chili sauce and karedok shows the Sundanese fondness for fresh raw vegetables. In contrast to Minangkabau cuisine which is rich and spicy with thick curry and coconut milk ingredients, Sundanese cuisine features a light, simple, and clear taste; ranging from savory salty, fresh sour, mild sweet, and spicy. 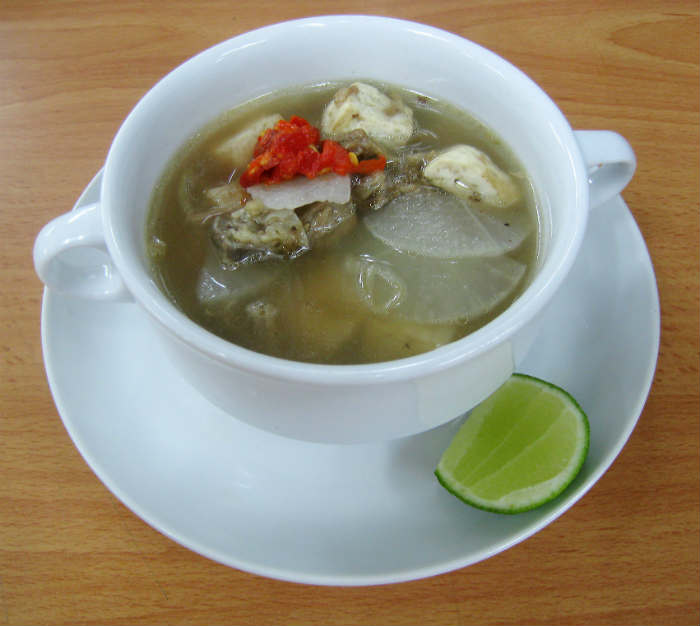 Sambal terasi is the most common accompaniment in Sundanese dishes, eaten with lalab or tofu and fried tempeh. Sayur asem with tamarind sauce is probably the most popular vegetable in Sundanese dishes. Other popular types of vegetables are Soto Bandung, a type of soto with sliced ​​beef and radish, and shaking noodles, a type of noodle with beef and gravel. 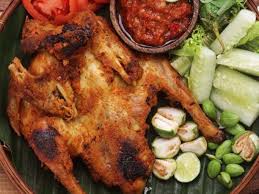 Freshwater fish such as carp, gouramy, tilapia, and catfish are commonly eaten grilled or fried, generally served with chili sauce and sweet soy sauce. The Sundanese are known to be fond of salted fish from seafood. Various salted seafood dishes such as salted chicken feathers, anchovies, squid, jambal, salted peda fish, and salted stingrays are common in everyday Sundanese dishes. Pais or pepes is a way of cooking using banana leaves as a food wrapper. This pepes method is very common in Sundanese cooking arts. Among them, pais side dishes or goldfish pepes are the most popular types of pepes. 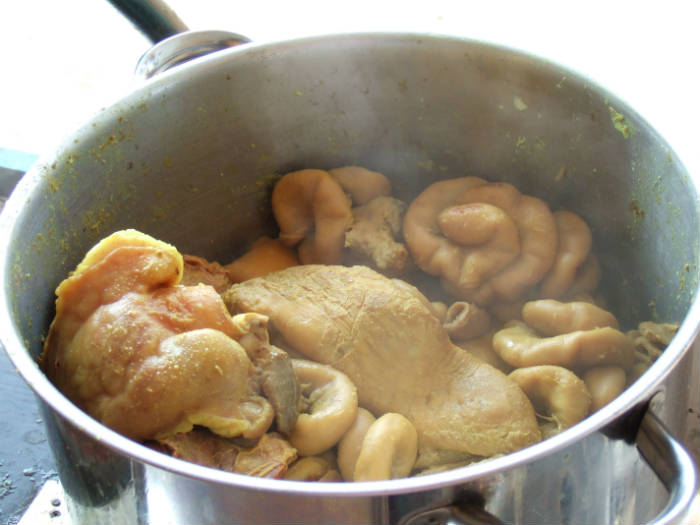 Chicken meat is usually fried or grilled, also usually served with chili sauce and sweet soy sauce. Bakakak hayam is a Sundanese grilled chicken. Sometimes chicken can also be cooked as pepes or soup. Red meat such as beef, buffalo, goat, and lamb can be seasoned with a mixture of spices and brown sugar and fried into gepuk empal sprinkled with fried onions.

Beef and potatoes are sometimes cooked in sweet soy sauce as a meat stew. Beef liver and jengkol are also commonly cooked in stews. Mutton and lamb are usually used as satay, Sundanese satay is maranggi satay with spices containing kecombrang. Goat curry and empal gentong from Cirebon are also popular as meat soup.

If the Javanese tradition of cooking likes tempeh, the Sundanese really like oncom, both of which are fermented with different types of mold; Tempe is made from soybeans, while oncom is made from peanuts. Sundanese cooking art develops cooking methods with fermentation methods, for example oncom, tauco (an adaptation of Indonesian Chinese cuisine), or snacks such as peuyeum (tapai) either from glutinous rice or cassava.

There are various shapes and types, as well as tastes and aromas, from dozens of traditional foods, snacks, and drinks, from various regions of Sundanese. All of them represent habits, tastes, as well as a wealth of local ingredients to make them. There may be several similar foods found in other areas, but usually there are certain characteristics that are definitely different.