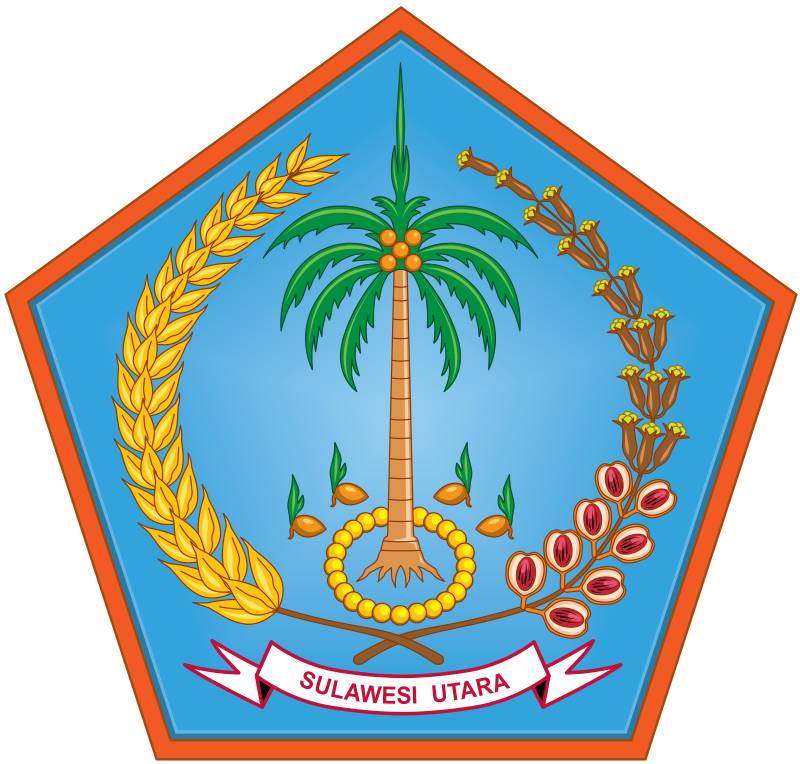 North Sulawesi (Indonesian: Sulawesi Utara) is a province of Indonesia. It is located on the Minahasa Peninsula of Sulawesi, south of the Philippines and southeast of Sabah, Malaysia. It borders the Philippine province of Davao Occidental and Soccsksargen regions of the Philippines to the north, the Maluku Sea to the east, Gorontalo and Celebes Sea to the west and the Gulf of Tomini to the southwest. With Miangas, it is the northernmost province of Indonesia. The province’s area is 13,892.47 square kilometres (5,363.91 sq mi), and its population was 2,270,596 according to the 2010 census; this rose to 2,621,923 at the 2020 Census, while the official estimate as at mid 2021 was 2,638,631.
more..
The province’s capital and largest city is Manado, which is also the main gateway and the economic center of the province. Other major towns includes Tomohon and Bitung in the northern (Minahasa) half of the province, and Kotamobagu in the southern (Bolaang Mongondow) half. There are 41 mountains with an altitude ranging from 1,112–1,995 metres (3,648–6,545 ft). Most geologic conditions in the province are consisted mainly of young volcanic regions, with numerous eruptions and many active volcanic cones that adorn the central Minahasa, Bolaang Mongondow and Sangihe Islands.

North Sulawesi in the past was an area of potential spices, rice and gold which became a battleground for the interests of economic hegemony between the Portuguese, Spanish, Dutch and the Kingdoms around this area, which ultimately led to political and military struggles. The past of this region also became the trading route between west and east and the spread of Christianity, Islam and belief or religion brought by Chinese merchants.

Following the Japanese surrender in 1945, the Dutch briefly regained possession of the area, before finally leaving for real in 1949, following the Round Table Conference, in which the Dutch recognized the newly created United States of Indonesia (RIS). Thus, North Sulawesi was incorporated into the territory of the State of East Indonesia (NIT). Because it was not in accordance with the will of the people, NIT was finally dissolved and then merged into the Republic of Indonesia. On 17 August 1950, the RIS was officially disbanded and then re-formed as the unitary state of the Republic of Indonesia. The island of Sulawesi was governed briefly as a single province, before being separated into several different provinces. Thus, the province of North Sulawesi was created on 14 August 1959. The western half of this area was separated from North Sulawesi on 5 December 2000 and established as the province of Gorontalo. 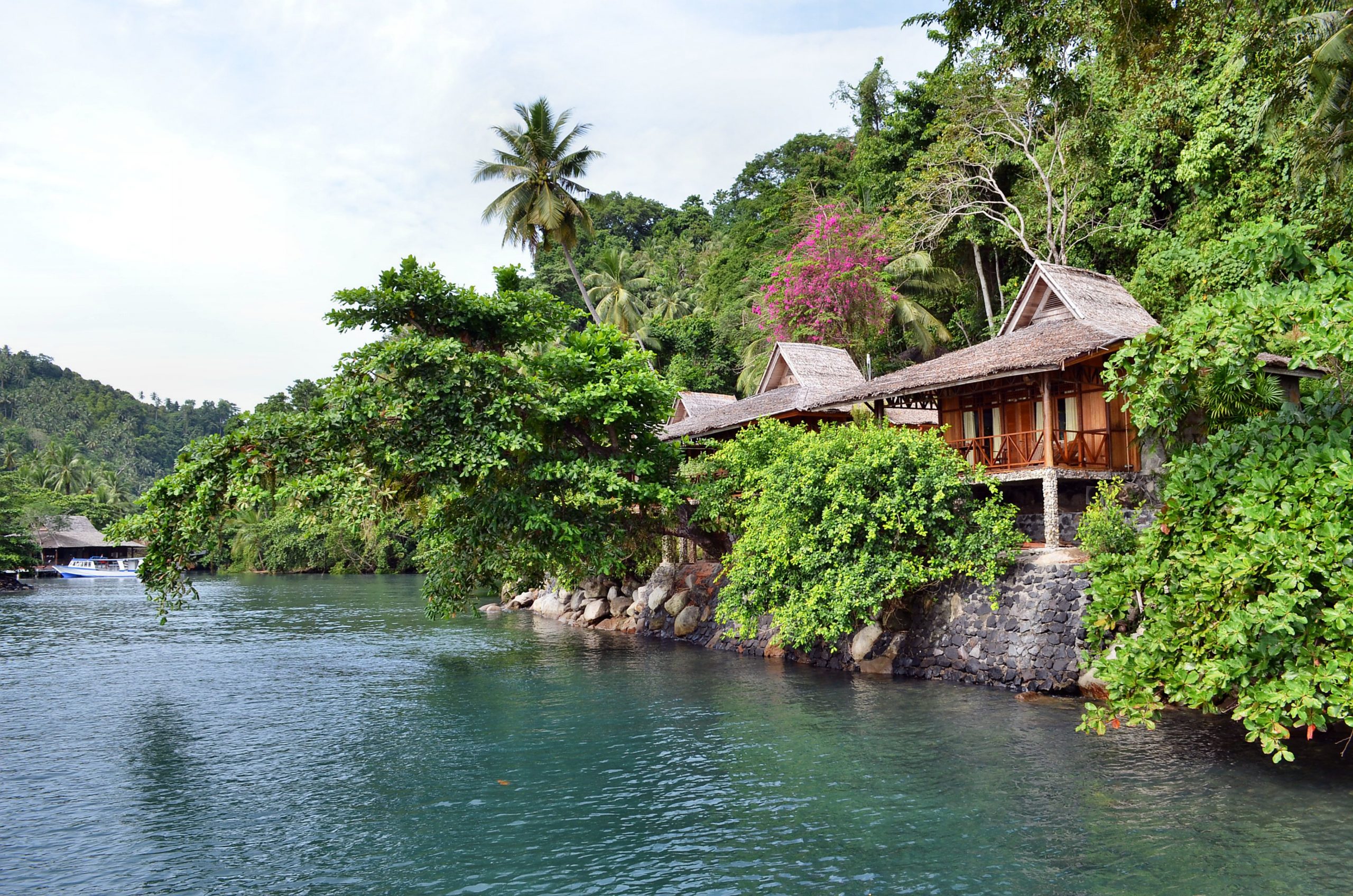 The area around North Sulawesi used to be called Minahasa. The name is still used sometimes to refer to the province. The word Minahasa is etymologically derived from the words Mina-Esa (Minaesa) or Maesa which means being one or uniting, meaning hope to unite various sub-ethnic groups of Minahasa consisting of Tontemboan, Tombulu, Tonsea, Tolour (Tondano), Tonsawang, Ponosakan, Pasan, And Bantik. 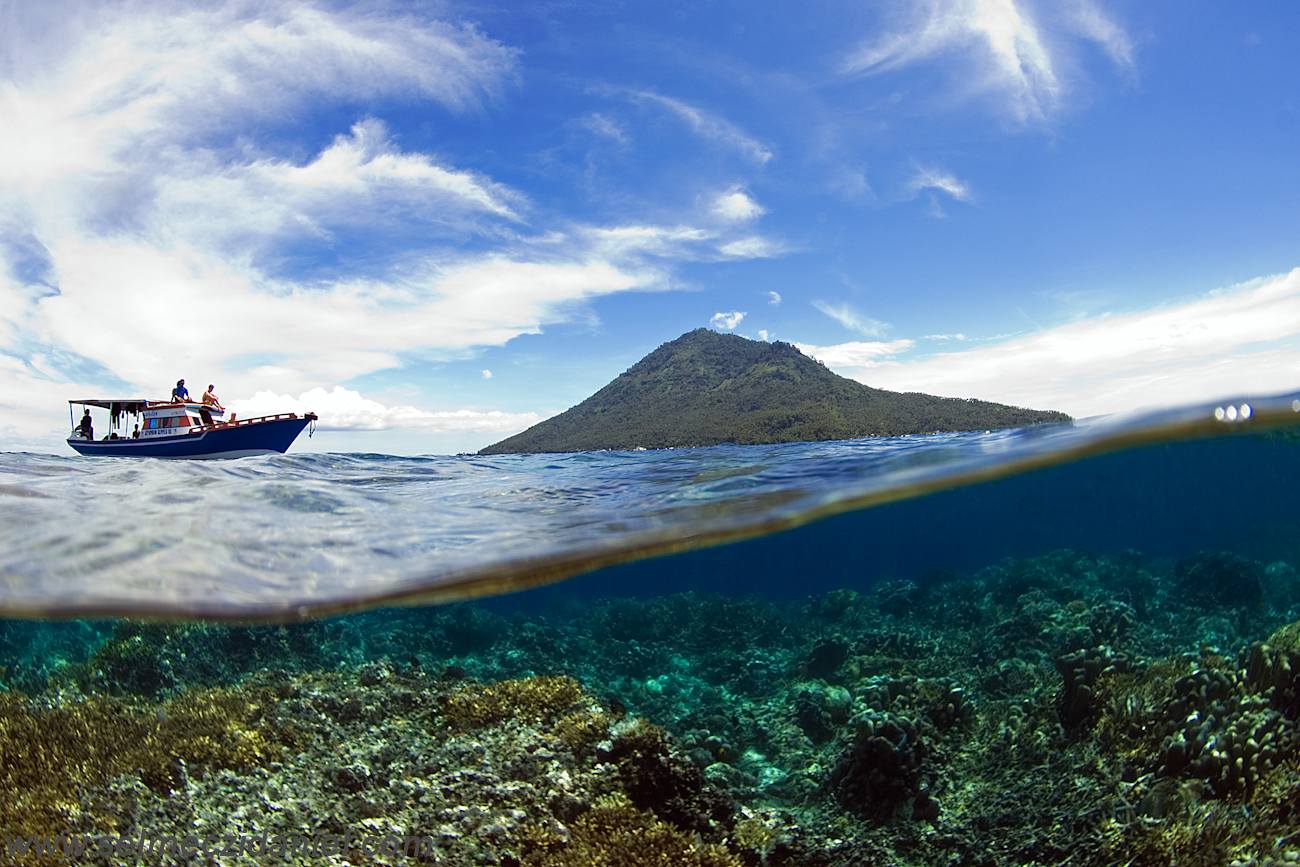 The appointment of Sam Ratulangi as the first governor of Sulawesi then succeeded in winning Minahasan support to the Republic of Indonesia. After Indonesian independence, Indonesia is divided into 8 provinces, and Sulawesi is one of these provinces. 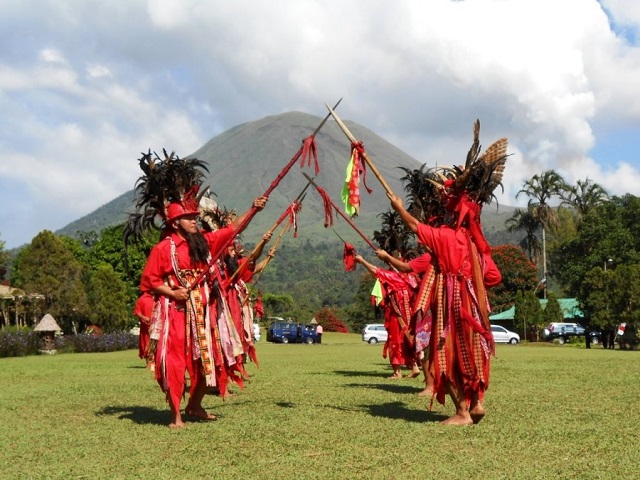 In 1964 the People’s Representative Council enacted Law no. 13 officially creating the province of North Sulawesi, with Manado as provincial seat. 14 August 1959 was designated as the anniversary of the province honoring the legacy of the Minahasa people’s fight for responsible government.

Since the 1998 reforms, the Indonesian government has begun to adopt laws that enhance regional autonomy. 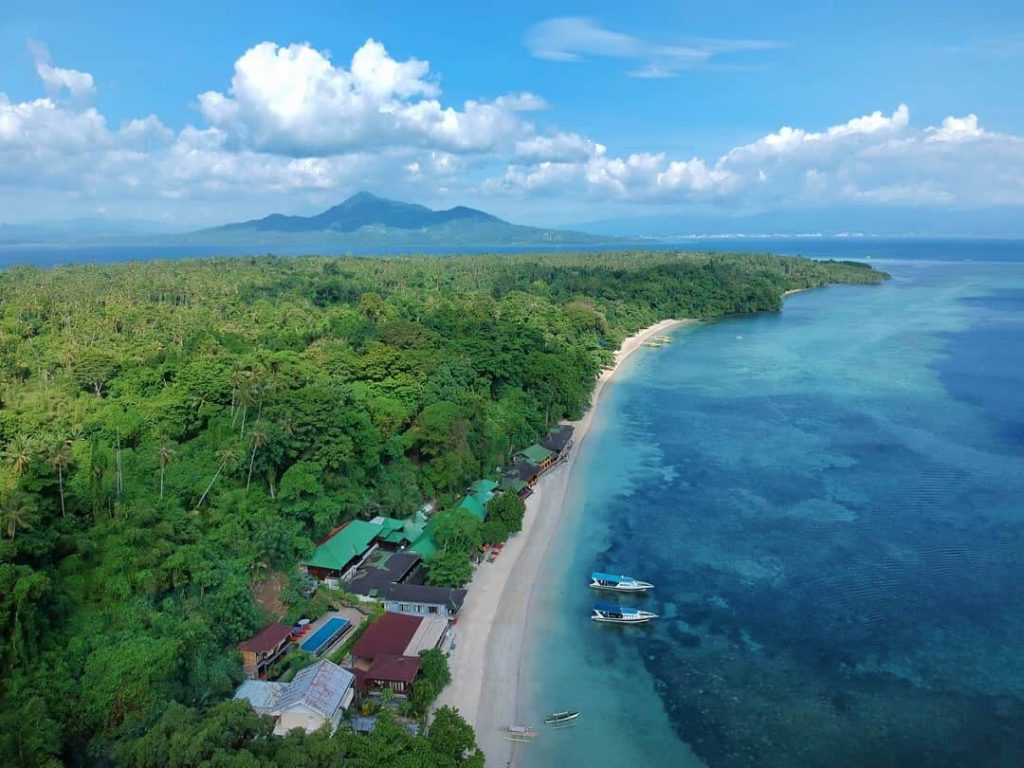 The province of North Sulawesi is located in the northern peninsula of Sulawesi Island and is one of three provinces in Indonesia which has geoposition, geostrategy and geopolitical advantages and is located on the Pacific Rim. The other two provinces are North Sumatra and Aceh Special Region.

Viewed from geographical location, North Sulawesi is located at 0.30–4.30 North Latitude (Lu) and 121–127 East Longitude (BT). The position of the peninsula stretches from east to west with the northernmost regions are the Sangihe and Talaud Islands. The archipelago is adjacent to neighboring Philippines. 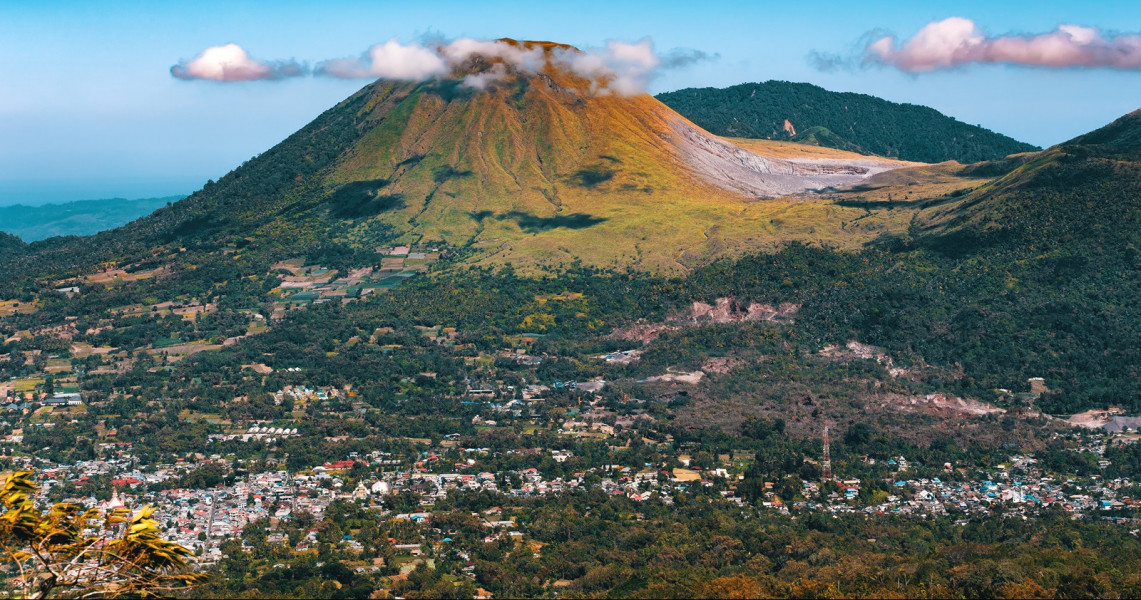 Most of the mainland area of North Sulawesi Province consists of mountains and hills interspersed by the valleys that make up the land. The mountains are located with a height above 1,000 m (3,300 ft) above sea level. 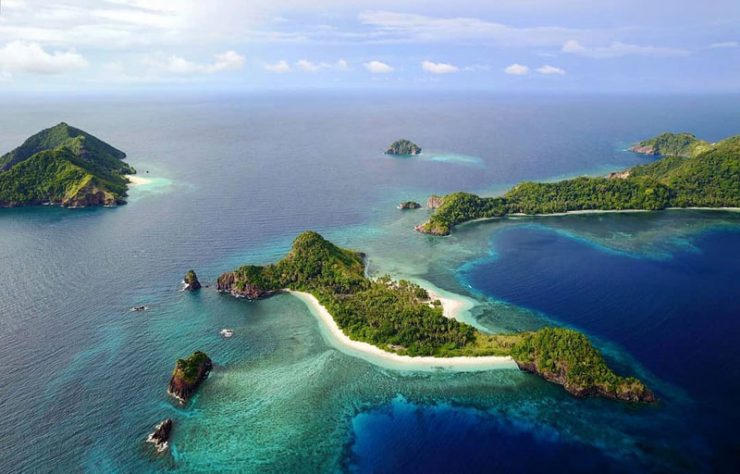 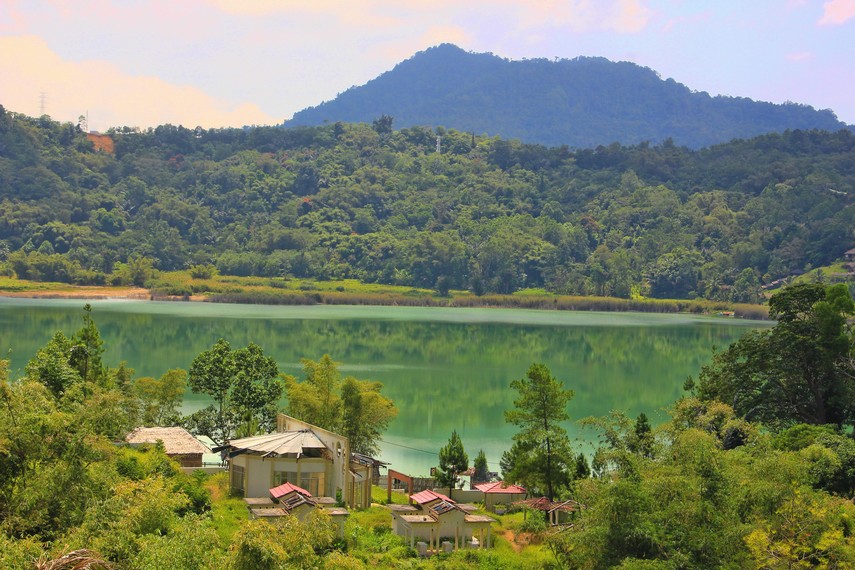 The lakes in this area potentially have economic value for the development of the field of tourism, irrigation and energy. The lakes are Lake Tondano with an area of 4,278 ha (10,570 acres) in Minahasa, Lake Moat covering 617 ha (1,520 acres) in East Bolaang Mongondow. 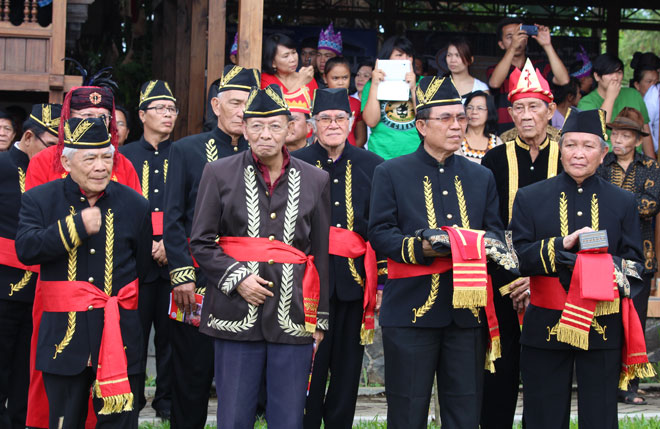 In 2010, about 68% were Christian (predominantly Protestant with a sizable Catholic minority), one of the few exceptions in the predominantly Muslim Indonesia, due to the prominent Dutch missionary activity during the colonial era. Also, because the Muslim-majority region of Gorontalo (then comprising a city and two regencies) was split off to form a new province in 2000.

There are also Muslim, Hindu, and Buddhist minorities. The largest ethnic groups are the Minahasan in the north of the province and the Mongondow to the south. The province’s chief city is Manado with a population of 453,182 people according to the mid 2021 official estimate. 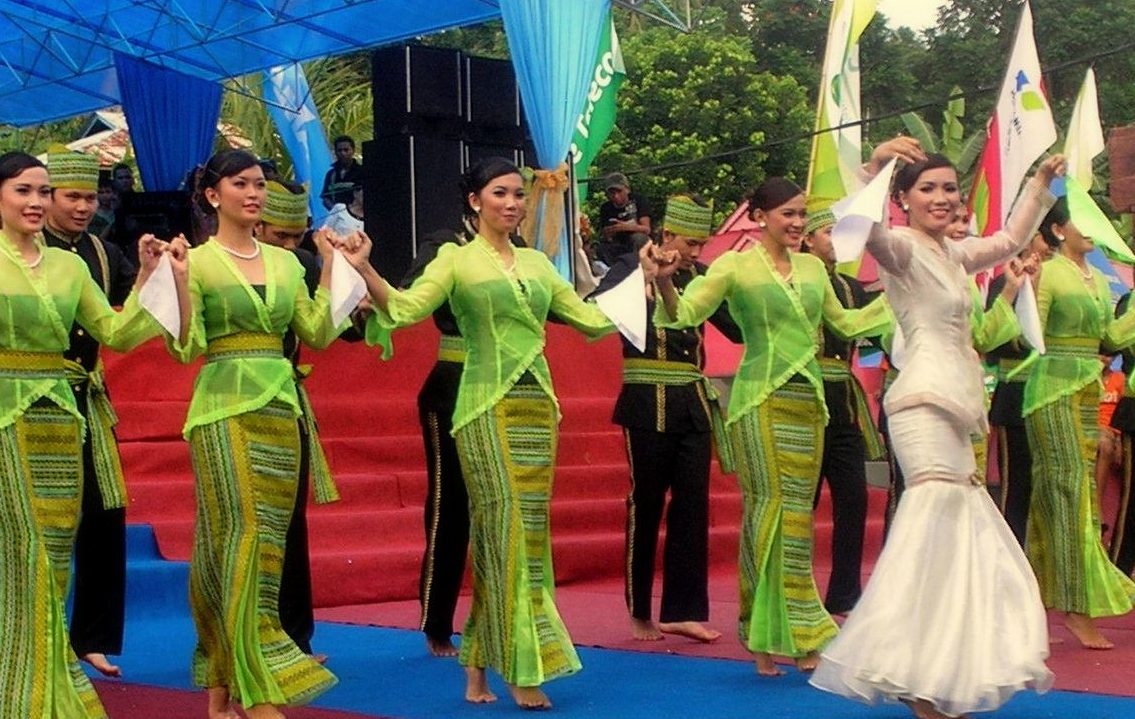 Most of the Christians in North Sulawesi adhere to Protestantism, while significant Roman Catholicism communities also exist in Manado and Bitung. Chinese folk religions such as Confucianism and Taoism also exist, which is mostly concentrated in Manado, which has a significant Chinese population.

Manado also has a significant Judaism community. Currently, the only synagogue in Indonesia is located in Manado. There are an estimated 800 people in Manado who adhere to Judaism. As the Indonesian government only recognizes six religions, those who adhere to Judaism can only put the officially unsanctioned religion on their ID cards. 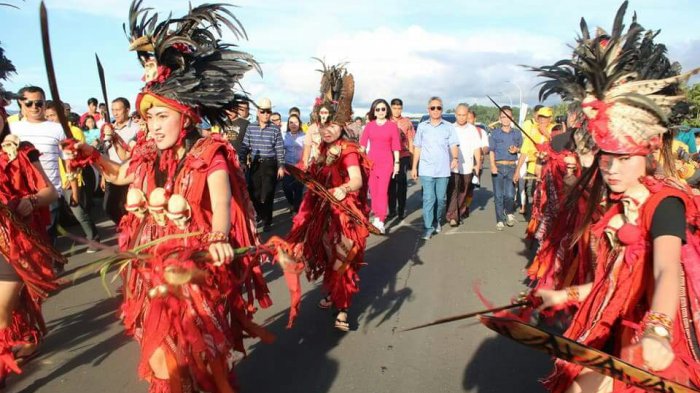 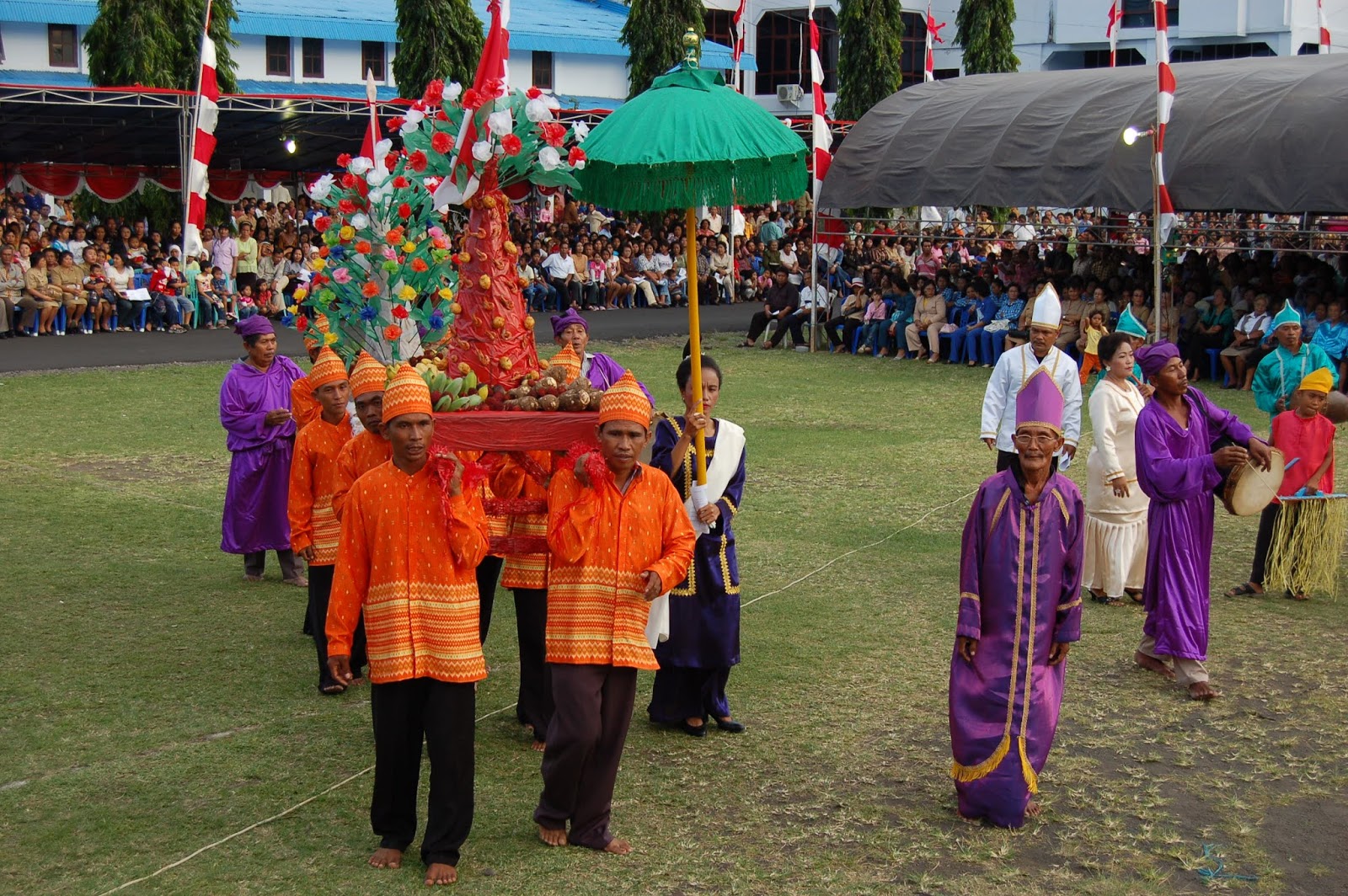 The Sangihe, Talaud and Siau mostly inhabit the Sangihe Islands, Talaud Island, and Lembeh Island, especially in coastal areas north, east and west of mainland North Sulawesi. The Bajau people are seafaring nomads who has migrated from the Sulu Archipelago in the Philippines. They inhabits several coastal villages of North Sulawesi in the northern part of North Minahasa Regency.

In addition to the natives, North Sulawesi is also home to migrants. There are a significant Chinese population in North Sulawesi, especially around the city of Manado. The Chinese are also one of the first people to have contact with the local people before the European came.

Other ethnic groups such as the Javanese and the Sundanese also exist. They are mostly migrated from where they come from due to the Transmigration program enacted by the Dutch during the colonial era until the Suharto era. They generally live in urban areas, such as Manado and Bitung.

Indonesian is the official language of the province, as well as other parts of Indonesia. Official documents released by the provincial government as well as road signs are all written in Indonesia. However, Manado Malay is the lingua franca of the province. This language resembles Indonesian but with a distinct accent and dialect. Some of the vocabulary are derived from Dutch, Portuguese and other foreign languages. Manado Malay are often used for day-to-day communication between different ethnic groups. 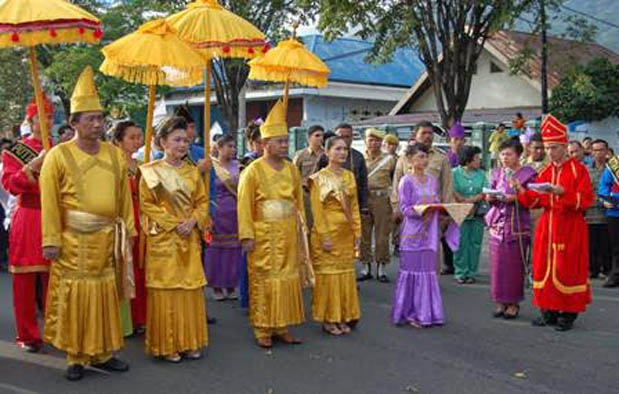 Other languages spoken are Javanese, Sundanese and Balinese. They are mostly spoken by migrants coming from other parts of Indonesia. As Manado, has a significant Chinese population, Hakka is also spoken by some Chinese people. Some other Chinese dialect are also spoken, such as Hokkien and Cantonese.

English and Mandarin are widely understood in areas where there is a large tourism industry, such as the Bunaken National Park. Older generations tend to understand Dutch and Portuguese. People who lived in islands near the borders of the Philippines may understand Tagalog. 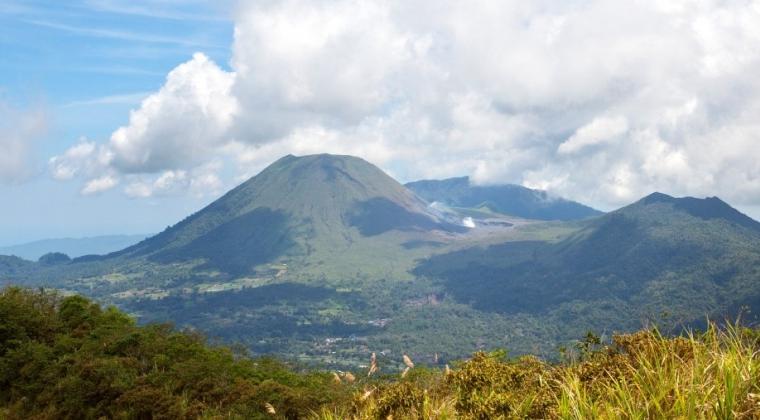 Climate areas of North Sulawesi include tropical ones affected by muzon winds. In the months of November to April the West winds bring rain on the north coast, whereas in May to October a dry south wind changes. Uneven rainfall with annual rates ranging from 2,000 to 3,000 mm (79 to 118 in), and the number of rainy days between 90 and 139 days.

Temperatures are at every level up to the height of the cool as the city area Tomohon, Langowan in Minahasa Regency, Modoinding in Minahasa Selatan Regency, Kotamobagu city, and Modayag and Pasi in Bolaang Mongondow Regency. The area that receives the most rainfall is the Minahasa area. 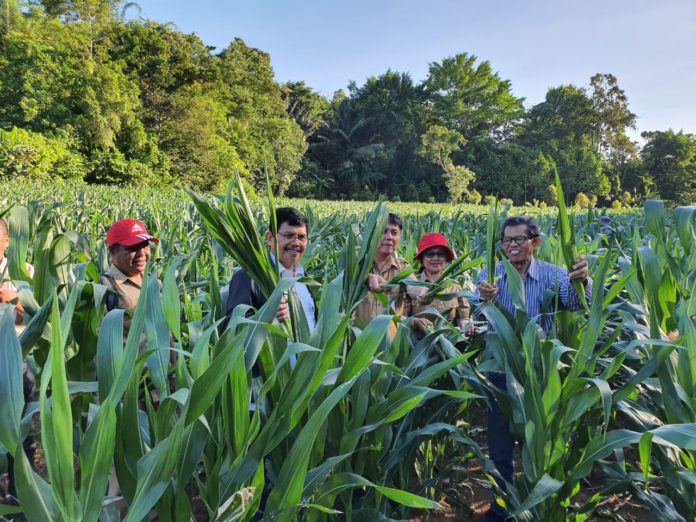 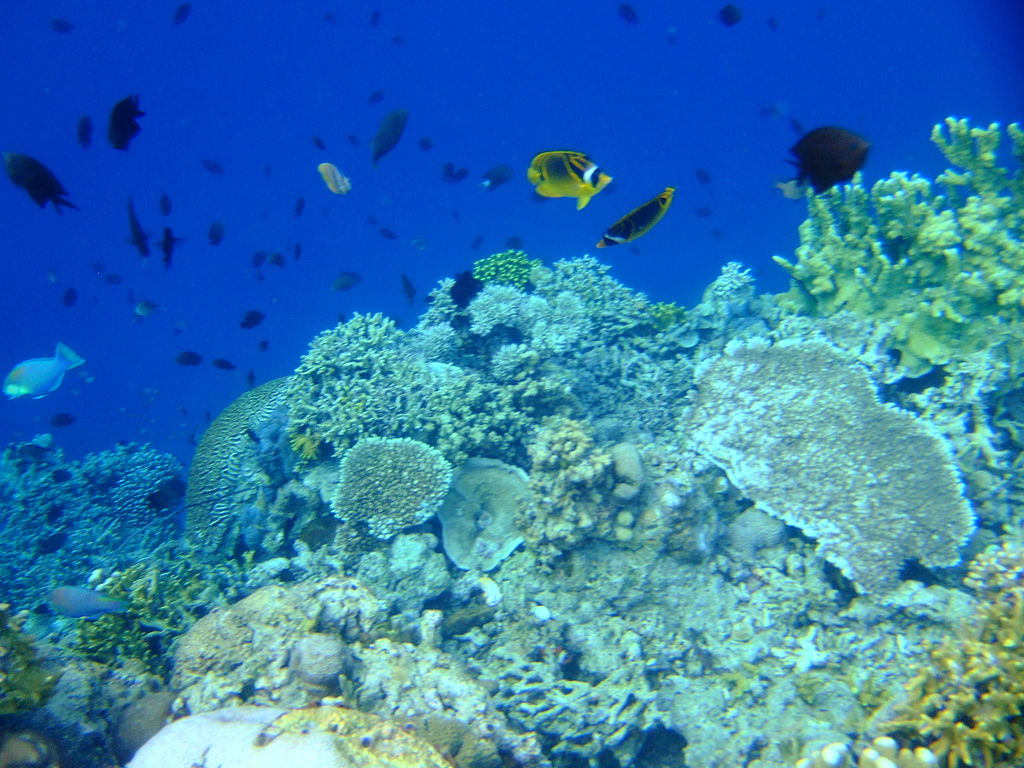 In general, the varieties of flora and fauna in North Sulawesi are similar to those in other parts of Indonesia, except for some animals not found in other areas such as Deer, Maleo, Taong, Mini Tarsius Spectrum in Bitung City Nature Reserve And Coelacanth off the coast of Manado. This area there are no wild animals except the type of snake and crocodile that there are not many. 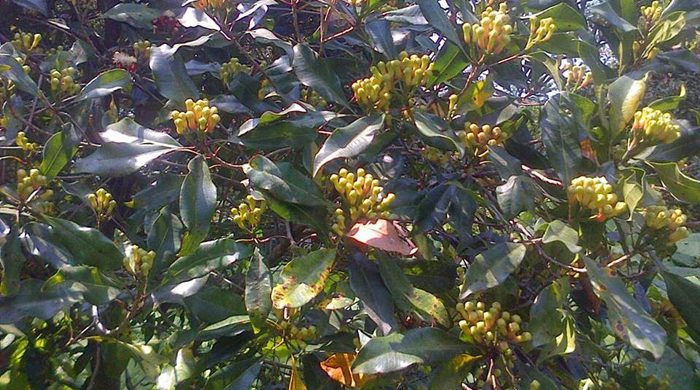 In the sea off North Sulawesi, there are several species of fish, coral, and plankton. Several types of famous marine fish and is one source of foreign exchange, among others: tuna, skipjack, yellow tail, lobsters, and others. The condition of flora can be said that the mainland of North Sulawesi partly dominated by forest.

Forest cover ranges from 300 metres (980 ft) from sea level to mountain tops with various types of good quality timber, including ebony (wooden) iron wood, linggua wood, cempaka wood, wooden nantu, gopasa wood, meranti wood, There are also rattan, and various types of Dammar. In addition, there are many plantation crops such as coconut, nutmeg, and cloves.