North Maluku (Indonesian: Maluku Utara) is a province of Indonesia. It covers the northern part of the Maluku Islands, bordering the Pacific Ocean to the north, the Halmahera Sea to the east, the Molucca Sea to the west, and the Seram Sea to the south. The provincial capital is Sofifi on the largest island of Halmahera, while the largest city is the island city of Ternate. The population of North Maluku was 1,038,087 in the 2010 census, making it one of the least-populous provinces in Indonesia, but by the 2020 Census the population had risen to 1,278,764.

North Maluku was originally the centre of the four largest Islamic sultanates in the eastern Indonesian archipelago—Bacan, Jailolo, Tidore and Ternate—known as the Moloku Kië Raha (the Four Mountains of Maluku). Upon Europeans’ arrival at the beginning of the 16th century, North Maluku became the site of competition between the Portuguese, Spanish and the Dutch to control trade. In the end, the Dutch emerged victorious, beginning three centuries of Dutch rule in the region. The Japanese invaded the region during World War II, and Ternate became the center of the Japanese rule of the Pacific region. Following the Indonesia’s independence, the region became a part of the province of Maluku.

The province of North Maluku was officially established on 12 October 1999. Ternate served as its de facto capital until 2010, when the provincial government moved to Sofifi. The regional economy in North Maluku largely relies on the agricultural sector, fisheries and other types of marine products. The main commodities that support the economic pulse in North Maluku include copra, nutmeg, cloves, fisheries, gold and nickel. North Maluku’s agricultural products include rice, corn, roasted sweet potatoes, beans, coconut, potatoes, nutmeg, sago, and eucalyptus.

The islands of North Maluku are mostly of volcanic origin, with the volcanoes of Dukono on Halmahera, Gamalama on Ternate still active and the whole of Tidore consisting of a large stratovolcano.

t The North Maluku Islands are formed by the movement of three tectonic plates, namely Eurasia, the Pacific and Indo-Australia which have occurred since the time of lime. this movement formed the archipelago volcanic archipelago that stretched from north to south in western Halmahera, including Ternate Island, Tidore Island, Moti Island, Mare Island and Makian Island. 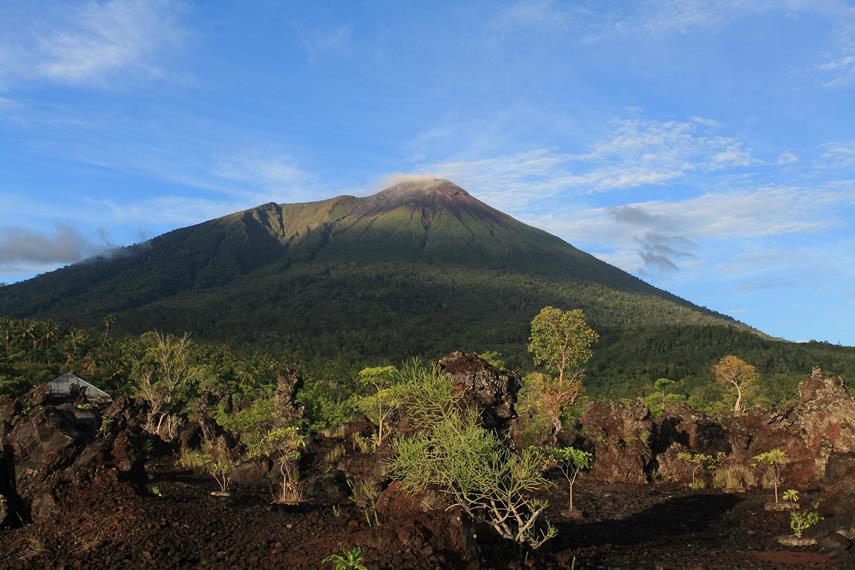 Halmahera Island itself is a volcanic island even though volcanic activity occurs only in a part of its territory. The islands have a tropical rainforest climate (Af). 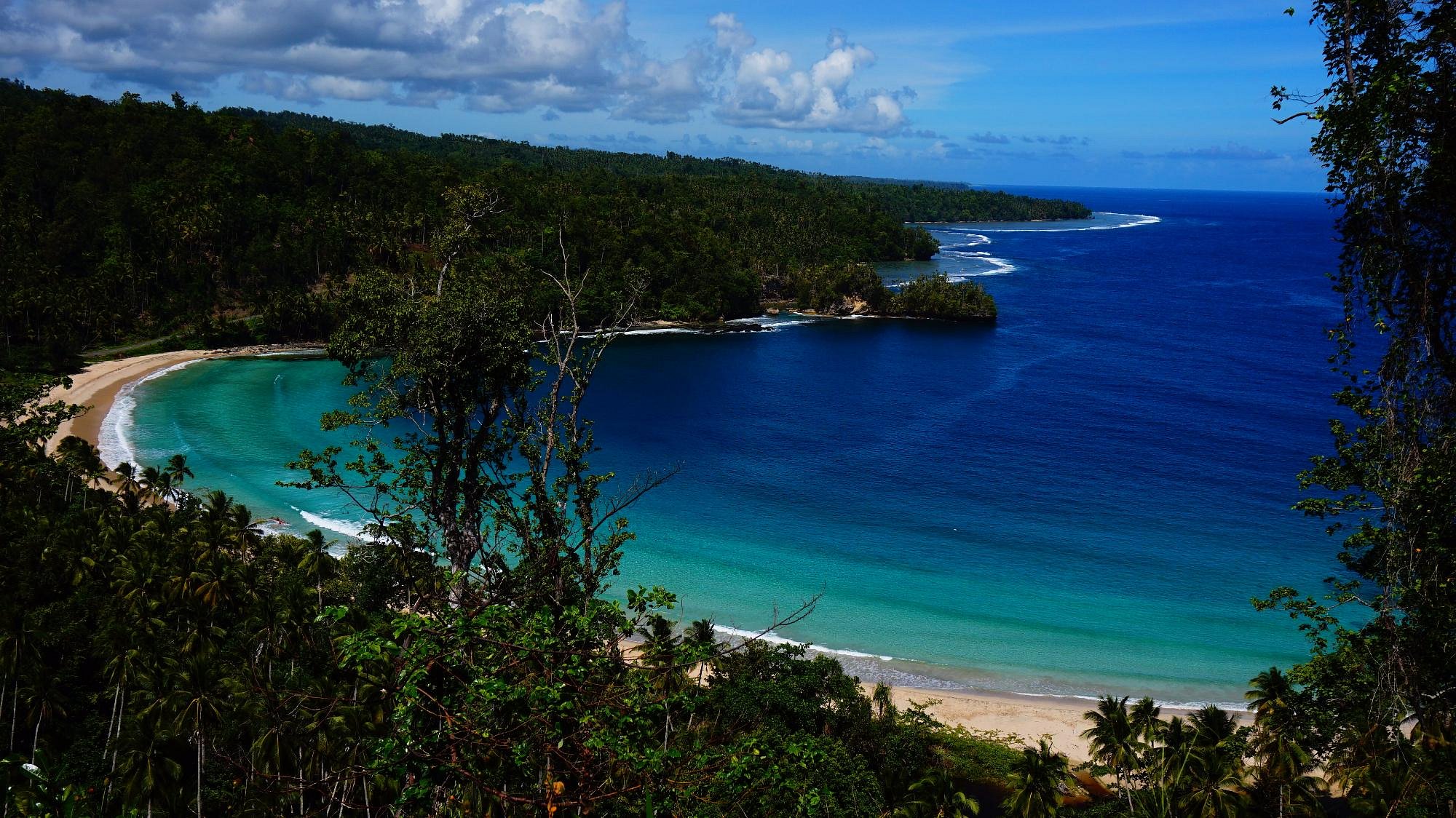 The rainforests of Halmahera, Morotai, the Obi Islands, the Bacan islands and other islands of North Maluku have been described by the World Wildlife Fund as the Halmahera rain forests ecoregion.

There are home to a number of plant and animal species unique to the islands, which are in the Wallacea transition zone, containing a mixture of species of Asian and Australasian origin. The predominant trees of the forest are Anisoptera thurifera, Hopea gregaria, Hopea iriana, Shorea assamica, Shorea montigena, Shorea selanica, and Vatica rassak. 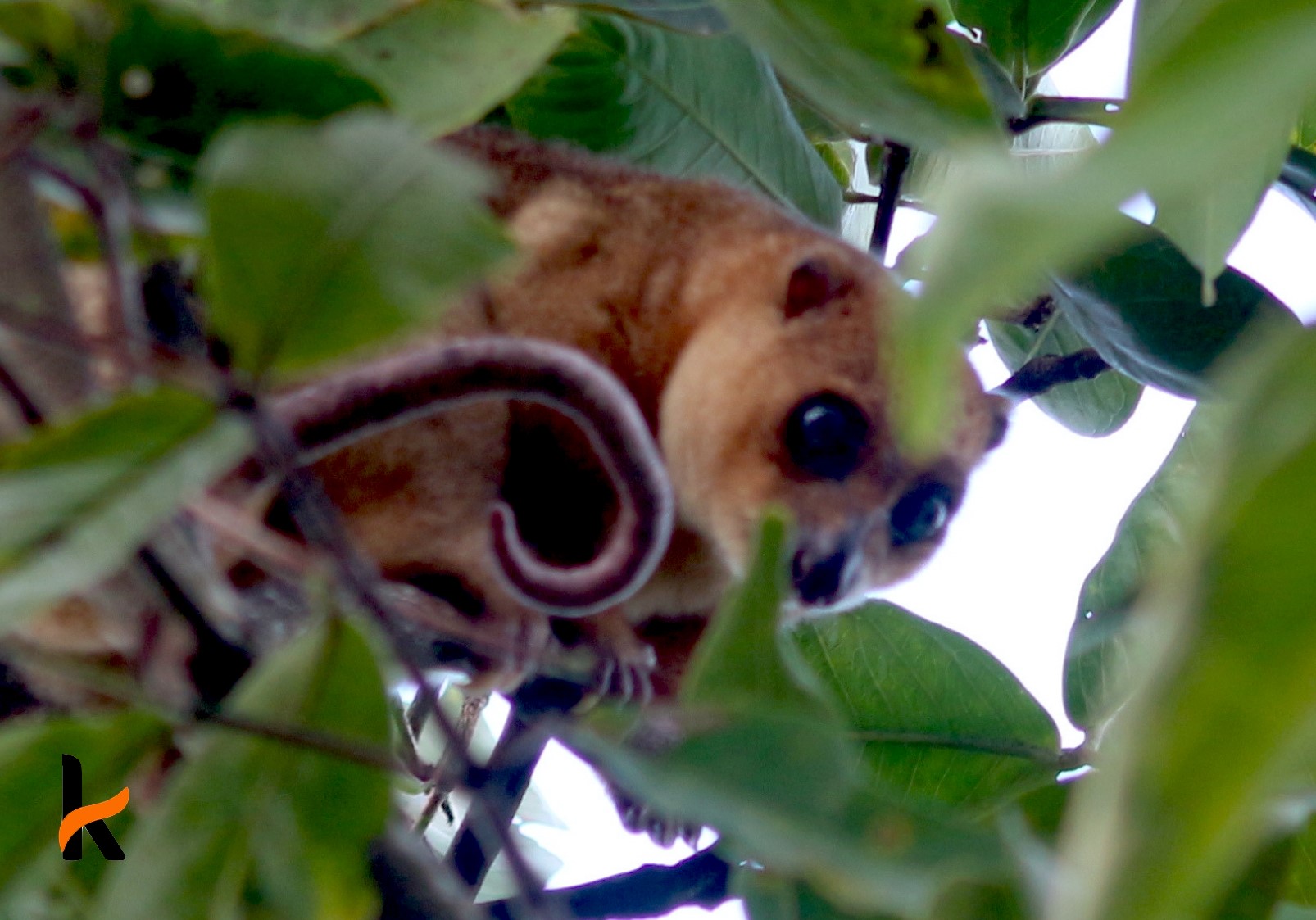 The endemics include four birds which are the only species in their genera, including the elusive invisible rail (Habroptila wallacii), the white-streaked friarbird (Melitograis gilolensis), and two birds of paradise, the paradise-crow (Lycocorax pyrrhopterus) and Wallace’s standardwing (Semioptera wallacii). The islands are also home to the largest bee in the world, Wallace’s giant bee (Megachile pluto).

Most of the natural forest remains on these mountainous islands, although much of the coastal and lowland areas have been cleared for clove-planting since the sixteenth century, especially on the islands of Ternate and Tidore. Logging has occurred more recently on Halmahera and Morotai. The Sula Islands are part of the Sulawesi lowland rain forests ecoregion. 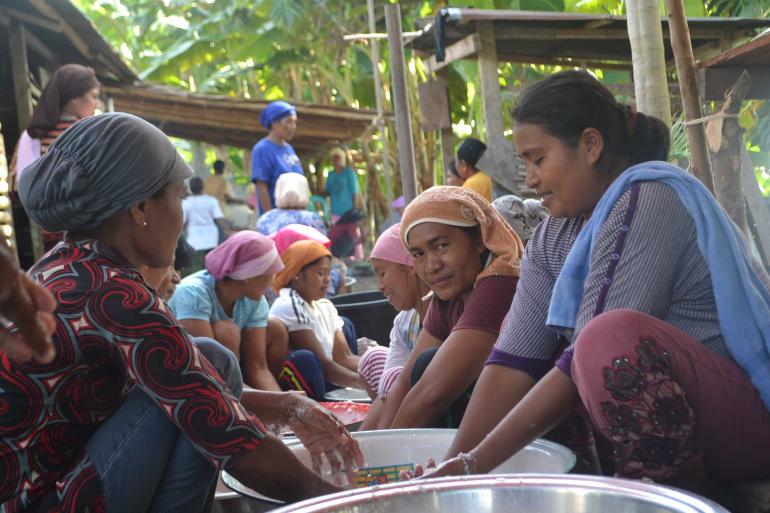 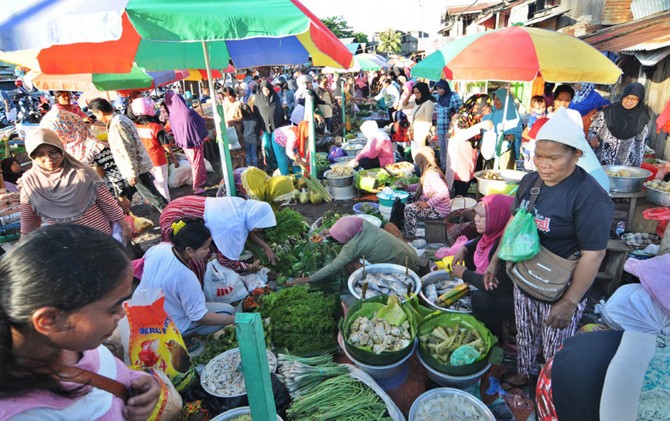 North Maluku has a very diverse population. In total there are around 28 ethnic groups and languages in North Maluku. They are divided into two families of languages based on the language used, namely Austronesian and Papuan. Austronesian groups live in the central and eastern parts of Halmahera. They include the Buli, Maba, Patani, Sawai and Weda peoples. 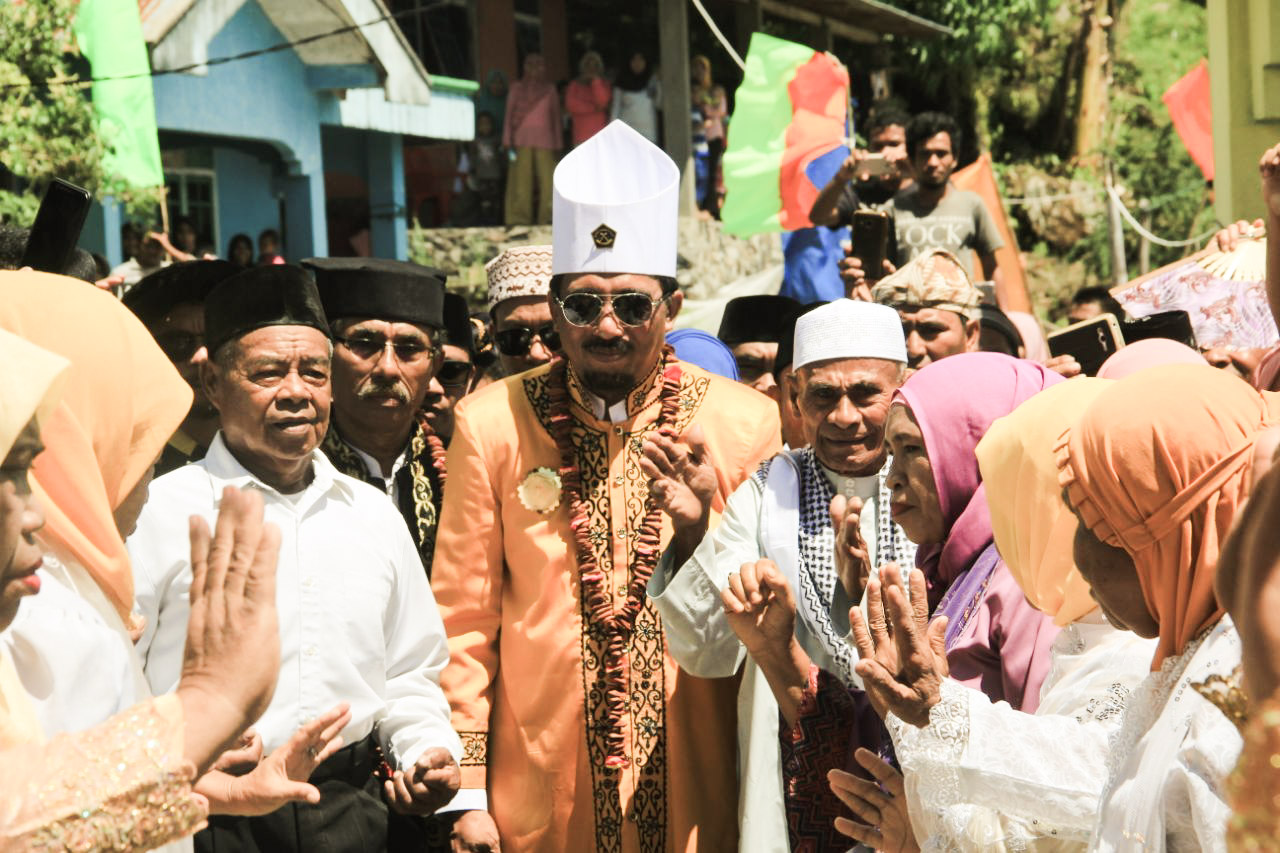 North and West Halmahera are dominated by Papuan-speaking ethnic groups, i.e. Galela, Tobelo, Loloda, Tobaru, Modole, Togutil, Pagu, Waioli, Ibu, Sahu, Ternate and Tidore. In the Sula Islands, there are several ethnic groups such as the Kadai, Mange and Siboyo peoples. Most people in this area have a command of Ternate Malay.

Most of the population in North Maluku is Muslim, with Christians (mostly Protestants) a significant minority. Hinduism, Buddhism, and various other religions are practiced by a small part of the population. According to data in 2017, the composition of religion in this province is Islam 75.34%, Protestant 23.96%, Catholic 0.68%, Hinduism 0.01%, Buddhism 0.01%. 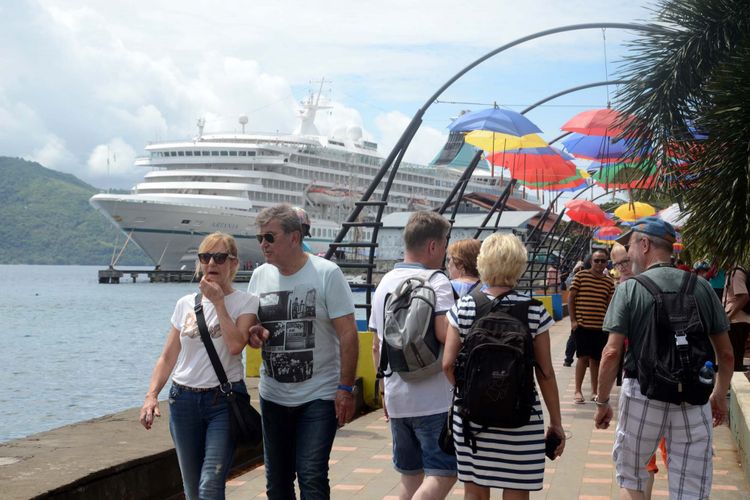 Maritime tourism in North Maluku is based on the area’s islands and beaches with marine parks and various types of ornamental fish. There are also tourist forests as well as national parks with endemic species ranked 10th in the world.

The nature reserve area consists of several types, both on land and in marine waters such as the Sibela Mountain Reserve on Bacan Island, Nature Reserve on Obi Island, Taliabu Nature Reserve on Taliabu Island and Nature Reserve on Seho Island. Cultural Heritage Areas that have archaeological historical values scattered in the North Maluku Province include cultural reserves in Ternate City, Tidore City, West Halmahera. 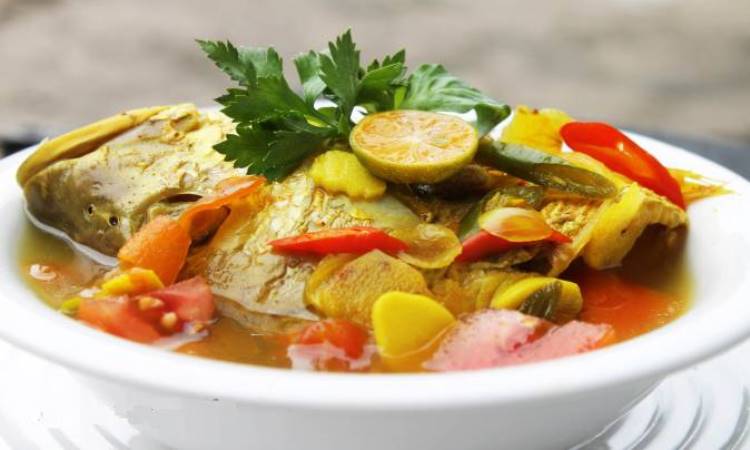 This area, Maluku Utara, which is located in the eastern part of Indonesia, has a charming charm in its tourism sector. In addition, North Maluku also has its own uniqueness in the form of special foods that are the target of tourists. 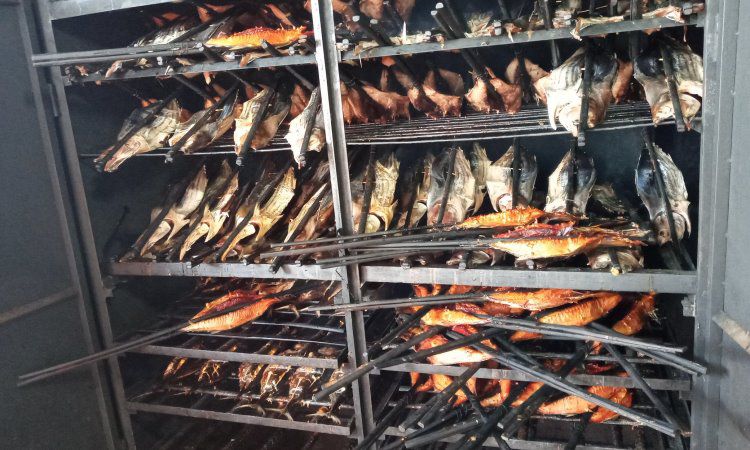 Smoked fish is the first culinary on the list that you must try when visiting North Maluku. Furthermore, the food that must be tasted when in the Banda Islands area is Ikan Kuah Pala Banda. Papeda is also the target of tourists while in North Maluku.

Gatang Kenari is one of the delicious culinary delights that characterize North Maluku with the basic ingredients of land crab which is very delicious when processed. This crab has a more savory and soft taste when compared to other types of crab. 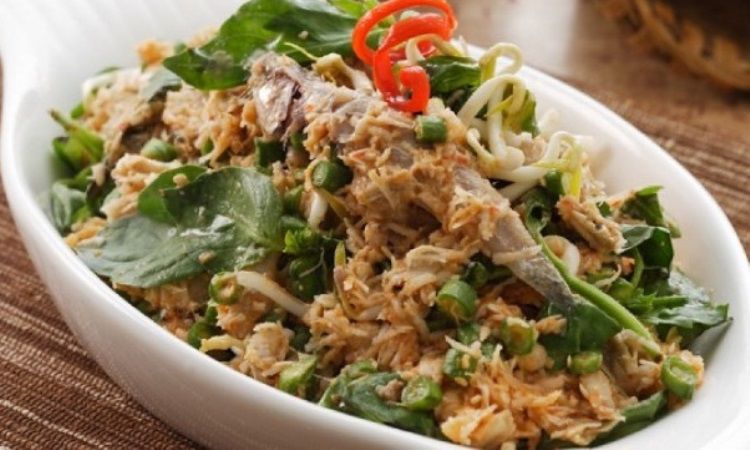 Kasbi Komplet is a North Maluku specialty that you must taste when you visit this area. Kasbi is another name for cassava. Generally, local people make kasbi as a staple food. Because cassava contains a fairly high content of carbohydrates.

Culinary that also should not be missed is Waku Komo Komo, cannot be found in other areas. made from flour and sago palm. The spices used to cook the food consist of garlic, shallots, lemongrass, ginger, salt, pepper, and thick coconut milk. 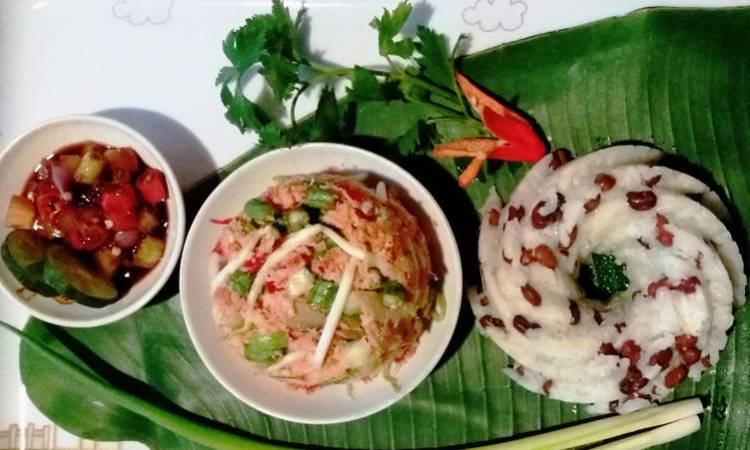 There is also a main dish originating from North Maluku, namely Nasi Lapola, with grated young coconut in it. Almost every culinary in North Maluku is served with Sambal colo colo, which is made from cayenne pepper, shallots, tomatoes, sugar, and salt, mixed together and topped with fresh basil leaves to add to the aroma.

Lapis Palaro is one of the typical dishes of North Maluku made from the main ingredient of beef. There is also Kohu kohu made from vegetables; bean sprouts, long beans, and basil leaves, raw and seasoned. Then add grated coconut, raw shallots, shredded smoked skipjack tuna, and complements such as lemon juice.

The next typical food that must be tasted when visiting is Halua Kenari. made from a mixture of walnuts and brown sugar additives. Suitable to eat for people who are on a diet.