Maluku is a province of Indonesia. It comprises the central and southern regions of the Maluku Islands. The main city and capital of Maluku province is Ambon on the small Ambon Island. The land area is 62,946 km2, and the total population of this province at the 2010 census results amounted to 1,533,506 people; the latest official estimate (as at mid 2019) is 1,768,500.

Maluku is located in Eastern Indonesia. It is directly adjacent to North Maluku and West Papua in the north, Central Sulawesi, and Southeast Sulawesi in the west, Banda Sea, East Timor and East Nusa Tenggara in the south and Arafura Sea and Papua in the east.

Maluku has two main religions, namely Islam which is adhered to by 49.61% of the population of Maluku and Christianity (both Protestantism and Catholicism) which is embraced by 49.16% of the population of Maluku.[3] Maluku is recorded in the history of the world due to conflict or tragedy of humanitarian crisis and sectarian conflict between Islam and Christianity, which is better known as the Ambon Tragedy. After 2002, Maluku changed its face to become a friendly and peaceful province in Indonesia, for which the world gave a sign of appreciation in the form of World Peace Gong placed at Ambon City Center.

All the Maluku Islands were part of a single province from 1950 until 1999. In 1999, the northern part of Maluku (then comprising the Maluku Utara Regency, the Halmahera Tengah Regency and the City of Ternate) were split off to form a separate province of North Maluku (Maluku Utara). 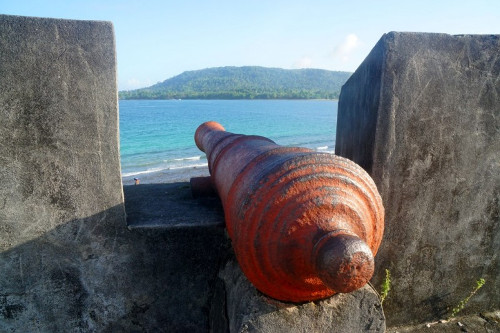 According to one theory, the term “Maluku” comes from the Arabic word, Al-Mluk (الملوك), which means land or island of kings. This is true because the Moluccas still consist of small kingdoms which are quite large with their own kings.

Maluku is bordered by North Maluku in the north, West Papua in the East, Southeast Sulawesi and Central Sulawesi in the West, and the nation of Timor-Leste and Australia in the south. While in total 581 areas were 376 km2 consisting of 527 191 km2 of marine sea area, and 54 185 km2 of sea area, or in other words around 90% of Maluku were sea areas.

As an archipelago province, Maluku has 559 islands which have relatively large islands, including: Seram (18 625 km2), Buru (9000 km2) Yamdena (5085 km2) and Wetar (3624 km2). With the dominant condition of regional waters, Maluku is very open to interacting with other provinces and surrounding countries. 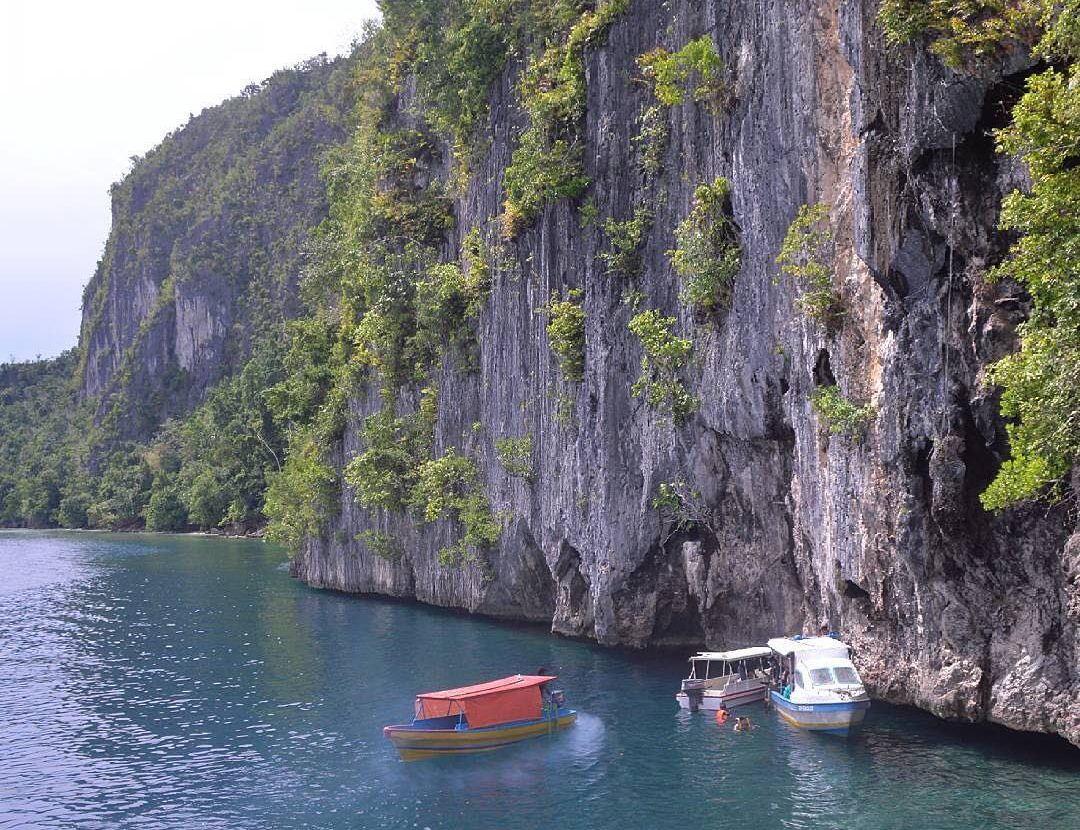 Maluku islands have a tropical monsoon climate, this climate is greatly influenced by the presence of vast marine waters and takes place in tune with the climatic season there. The average temperature based on Meteorological stations in Ambon, Tual and Saumlaki are C 26.80, 27.70 C and 27.40 C. Minimum temperatures are 24.00, 24.70 C and 23.80 C, respectively, while the temperature Tual, the average humidity reaches 85.4% when recording Saumlaki Meteorological Station shows the average humidity is 80.2%.

The topography of the average condition of the Ambon region is rather flat, starting from the coast to residential areas. The mainland morphology of Ambon also varies from flat, bumpy, bumpy, hilly and mountainous with soft steep slopes to slightly dominant. The flat area has a slope of 0–3%, corrugated slope 3–8%, corrugated area 8–15%, hilly area 15–30% slope elevation and mountainous area greater than 30%. As for the Central Maluku Regency, West Seram and East Seram, the topography is generally hilly. 0–2%, tilt / wavy 3–15% rather steep 15–40% and very steep 40%. 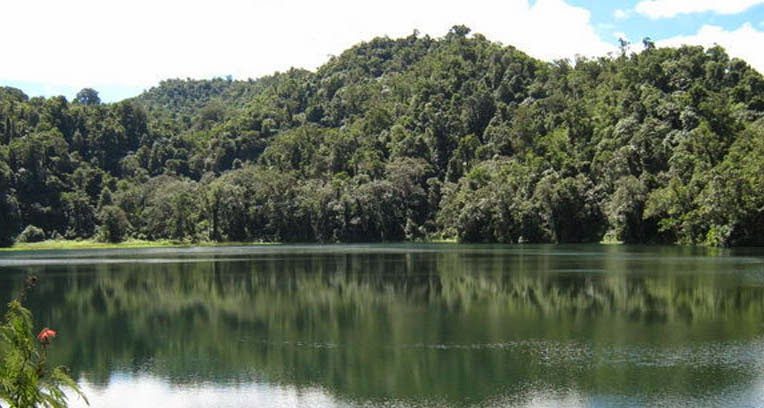 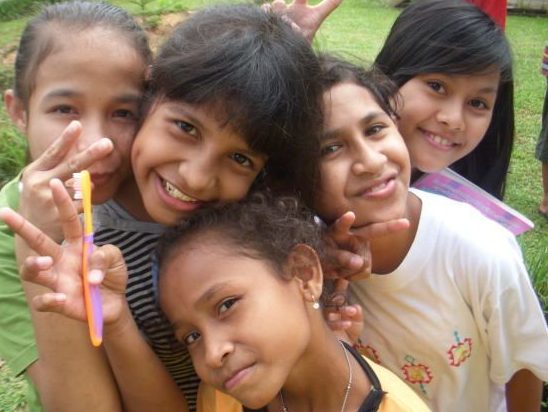 Maluku are dominated by the Moluccans, which are part of the Melanesian ethnic race related to the people in New Guinea as well as other countries such as Fiji, Vanuatu, Solomon Islands, and several island nations scattered in the Pacific Ocean.

There is a lot of strong evidence that refers to Maluku having traditional ties with the Pacific island nation, such as language, folk songs, food, as well as equipment for household appliances and typical musical instruments, for example: Ukulele (which is also found in the Hawaiian cultural tradition).

They generally have dark skin, curly hair, large and strong bones, and a more athletic body profile compared to other tribes in Indonesia, because they are a tribe of islands where sea activities such as sailing and swimming are the main activities for men. 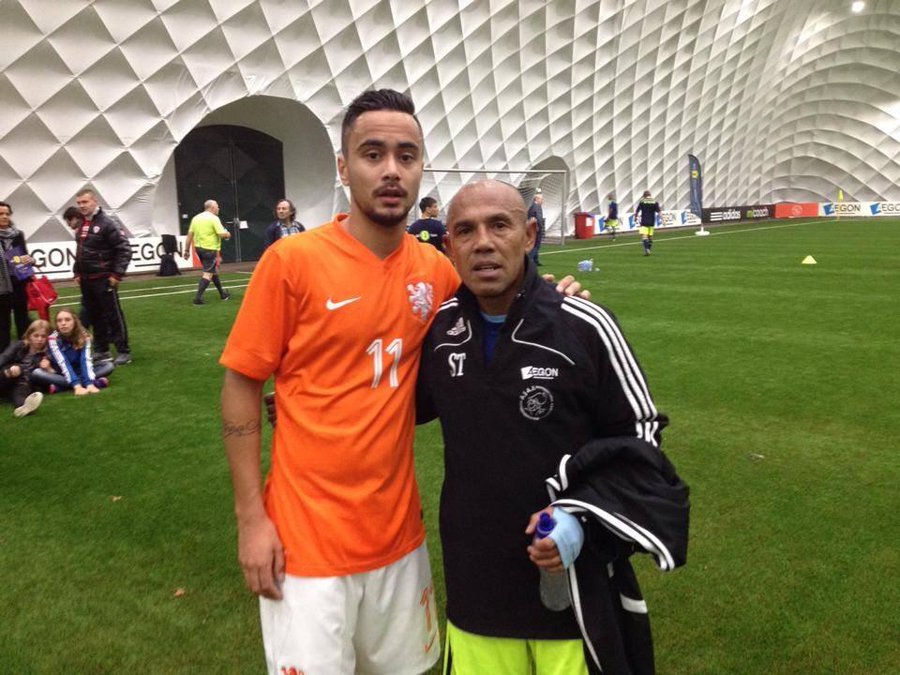 Since ancient times, many of them already had mixed blood with other tribes, namely with Europeans (generally the Netherlands and Portugal) and Spain, then the Arabs were very common considering this area had been controlled by foreign nations for 2,300 years and gave birth to new descendants, which is no longer a pure Melanesian race but still inherits and lives with the Melanesian-Alifuru style. 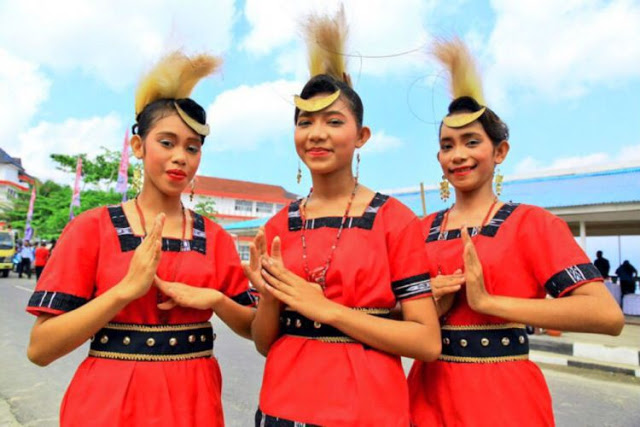 Today, the people of Maluku are not only found in Indonesia but are spread in various countries in the world. Most of those who migrate abroad are due to various reasons. One of the reasons for the most classic was the large-scale movement of the Moluccas to Europe in the 1950s and settled there until now. Another reason is to get a better, more knowledgeable life, marrying and marrying other nations, who later settle down and have generations of new Moluccas in the other hemisphere.

These Maluku expatriates can be found in quite large communities and are concentrated in several countries such as the Netherlands (which is considered the second homeland by the Moluccas other than the land of Maluku itself), Suriname, and Australia. The Maluku community in other regions of Indonesia can be found in Medan, Palembang, Bandung, Greater Jakarta, Central Java, Yogyakarta, East Java, Makassar, Kupang, Manado, East Kalimantan, Sorong, and Jayapura.

The language used in Maluku, especially in Ambon, has been influenced by foreign languages in a way, languages of explorers who have visited, visited, and even occupied and colonized Maluku in the past. The nations were the Spanish, Portuguese, Arabic and Dutch.

The Ambonese language as the lingua franca in Maluku has been understood by almost all residents of Maluku Province and generally, little by little, is understood by other East Indonesian people such as those in Ternate, Manado, Kupang, etc. because Ambonese is related to other languages in the provinces of North Sulawesi, North Maluku, Papua, West Papua, and East Nusa Tenggara.

Indonesian, as the official language and language of unity in the Unitary State of the Republic of Indonesia (NKRI), is used in official and formal public activities such as in government offices and in schools and in places such as museums, airports and ports. 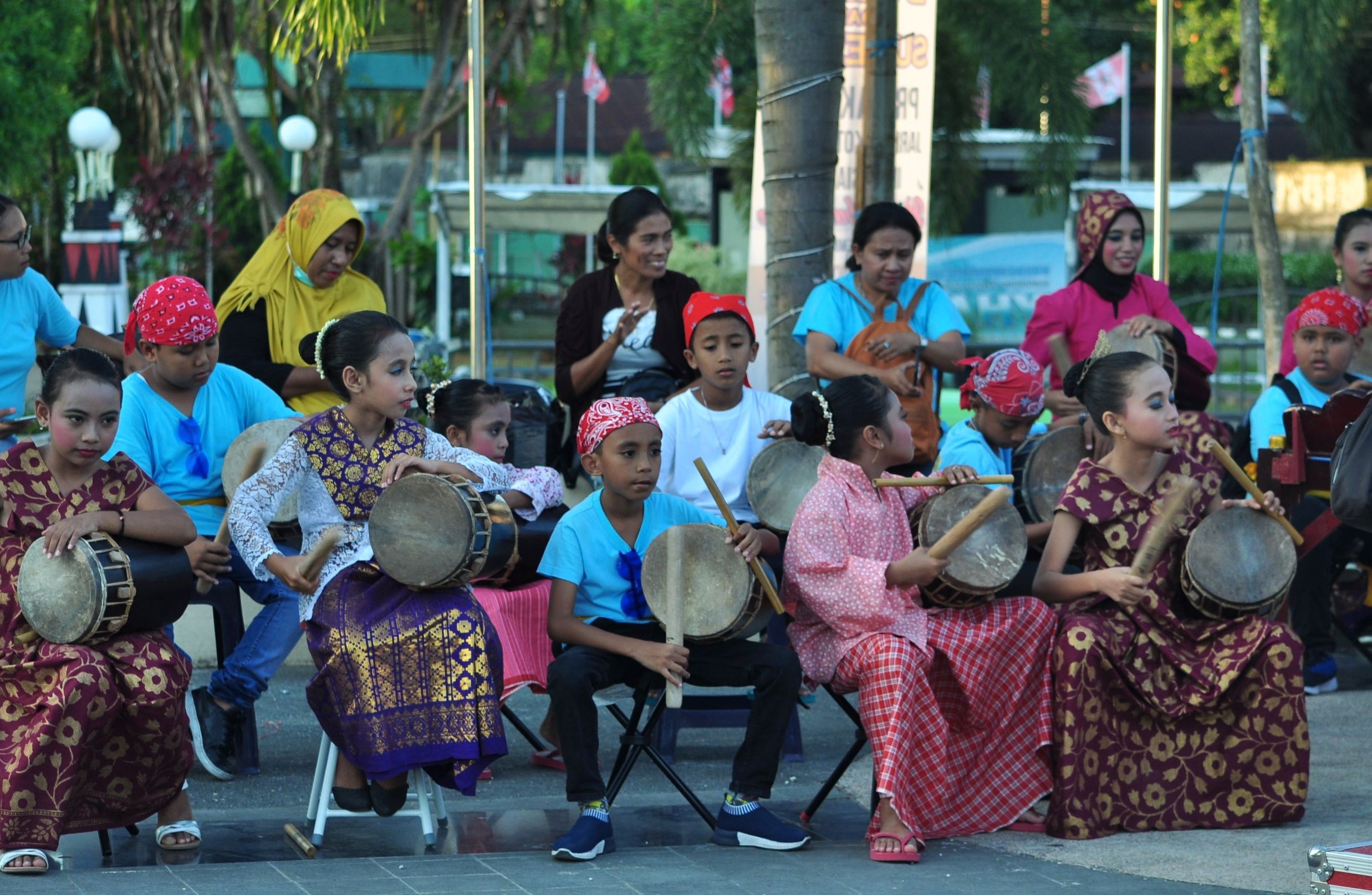 Maluku is the largest archipelago in all of Indonesia. Maluku Province and North Maluku Province together compose the Maluku Islands. The large number of islands that are separated by long distances from each other also results in the increasingly diverse languages used in this province. Some of the most common languages spoken in Maluku – apart from Ambonese and Indonesian – are:

Wemale language, used by residents of Piru, Seruawan, Kamarian, and Rumberu in the West Seram Regency.
Alune language is used in three water streams, namely Tala, Mala and Malewa in the West Seram Regency area.
Nuaulu language, spoken by the Nuaulu tribe in the south of Seram Island, is between Elpaputi Bay and Teluk Teluti.
Atiahu language, used by three ethnic groups, which also included the Nuaulu family, namely Atiahu, Werinama, and Batuasa in the East Seram Regency.
Seti language is spoken by the Seti people, in North Seram and East Teluti, and also as a trade language in Eastern Seram, and
Tarangan language, spoken in the Aru Island region 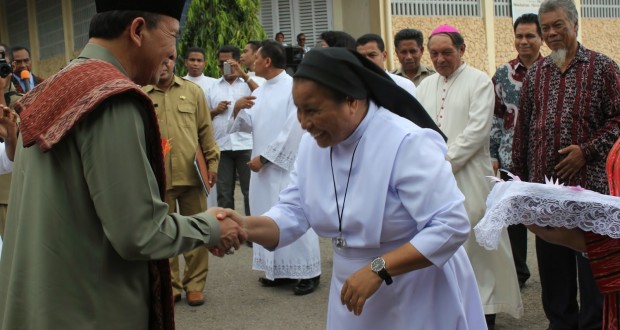 Most of the people of Maluku adheres to the three main religions namely Islam (49.61% of the population), Protestantism (42.40%), and Catholicism (6.76%). The spread of Islam was carried out by the Sultanates of Iha, Saulau, Hitu, and Hatuhaha and Arab traders who visited Maluku. While the spread of Christianity was carried out by missionaries from Portugal, Spain and the Netherlands.

The Protestant Church of Maluku or commonly known as the GPM is the largest synod organization and church organization in Maluku, which has church congregations in almost the entire Sarane country throughout Maluku.

It consists of Tifa, Tifa Jekir, Tifa Dasar, Tifa Potong, Tifa Jekir Potong and Tifa Bas, plus a large Gong and Toto Buang which is a series of small gongs placed on a table with several holes as a buffer. There is also a wind instrument namely Bia Skin (Shellfish). 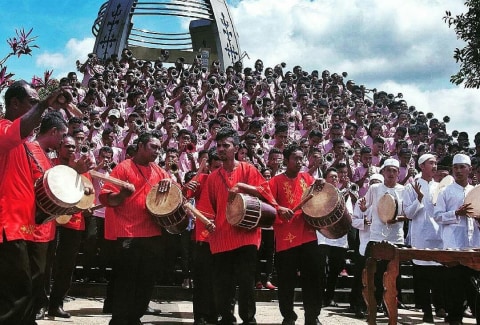 In the culture of Maluku, there are also stringed instruments namely Ukulele and that can also be found in the Hawaiian culture in the United States. This can be seen when Maluku music from the past until now still has a characteristic in which there is the use of Hawaiian musical instruments both in pop songs and in accompanying traditional dances such as Katreji.

Other musical instruments is the Sawat. Sawat is a blend of Maluku culture and Middle Eastern culture. In a few centuries ago, the Arabs came to spread Islam in Maluku, then there was a mixture of cultures including music. It is evident in several Sawat musical instruments, such as Tambourines and Flutes that characterize Arabian music instruments.

Outside of the variety of musical instruments, Moluccan people are famous for being good at singing. Since long ago they have often sung in accompanying traditional dances. There are many famous Moluccan singers in both Indonesia and the Netherlands, such as Broery Pesulima, Daniel Sahuleka, Ruth Sahanaya, Eric Papilaya, Glen Fredly, etc. 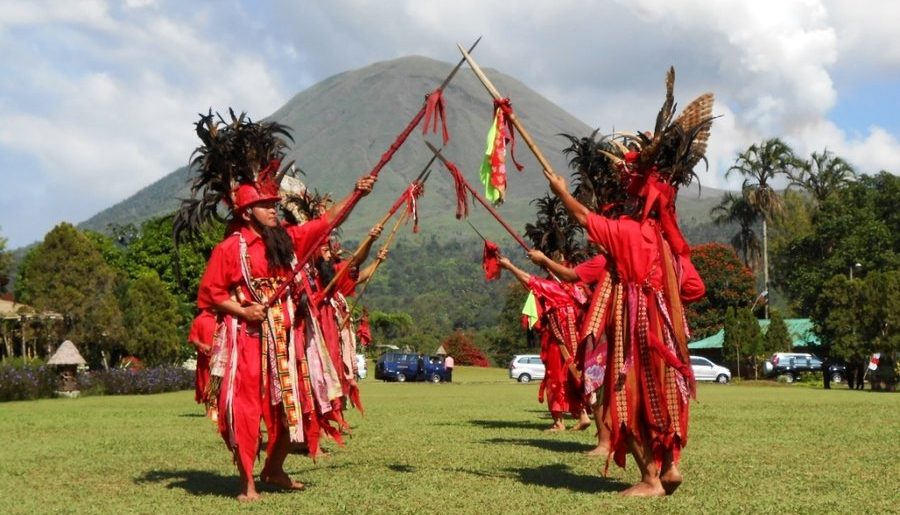 The famous dance from the Moluccas is the Cakalele which describes the might of the Moluccas. This dance is usually performed by adult men while holding Parang and Salawaku (Shield).

There are also other dances like Saureka-Reka that use the sago palm fronds. The dances performed by six women really need accuracy and speed while accompanied by a very interesting musical rhythm. 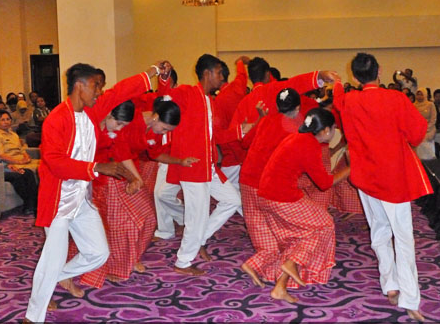 The dance which is a depiction of youth association is Katreji. Katreji dance is played in pairs between women and men with varied energetic and interesting movements. This dance is almost the same as European dances in general because Katreji is also an acculturation of European (Portuguese and Dutch) culture with Maluku culture.

This is more evident in every signal in changing floor patterns and movements which still use Portuguese and Dutch as a process of bilingualism. This dance is accompanied by a violin instrument, bamboo flute, ukulele, karakas, guitar, tifa, and bass guitar with a more prominent western (European) musical pattern. This dance is still performed by the people of Maluku until now.

In addition to Katreji, the famous European influence is Polonaise, which is usually carried out by Moluccans at the time of marriage by each party member in pairs, forming a circle formation and carrying out light movements that can be followed by everyone, both young and old.

In addition, there is also a Crazy Bamboo Dance. Crazy bamboo dance is a special dance that is magical, originating from Suli Village. The uniqueness of this dance is that the dancers are burdened by bamboo which can move uncontrollably and this dance can be followed by anyone.

Maluku makes sago as its staple food and is one of the areas famous for its beautiful islands and fish-based specialties.

In ancient times, the inhabitants of Europe called Maluku the “Spice Islands” because Maluku province was the best producer of spices, such as cloves and nutmeg.

In addition, Maluku is also famous for its abundant marine products. Here are my typical Maluku foods.