Indonesia is a country that has the most volcanoes in the world. No less than 500 volcanoes are scattered in Indonesia, with the following details: 126 of them are active volcanoes; About 70 of these active volcanoes often erupt; 70 volcanoes that have erupted in the last 400 years.
From the data on the distribution of volcanoes in Indonesia, 30 in Sumatra Island, 35 in Java, 30 in Bali and Nusa Tenggara, 16 in Maluku Island, 18 in Sulawesi Island and a total of 129.
more..
Indonesia’s geography is dominated by volcanoes that are formed due to the subduction zone between the Eurasian plate and the Indo-Australian plate. Some volcanoes are well-known for their eruptions, for example Krakatau whose eruption had a global impact in 1883, the Lake Toba supervolcano eruption which is estimated to have occurred 74,000 years which caused a volcanic winter for six years, and Mount Tambora with the most violent eruption. which has been recorded in history in 1815. 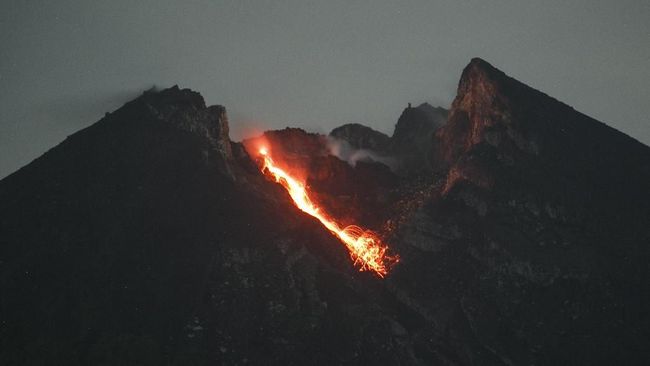 Indonesia’s volcanoes are part of the Pacific Ring of Fire. The 150 entries in the list below are grouped into six geographic areas, four of which have volcanoes in the Sunda Arc line. The other two areas include volcanoes on Halmahera, including the surrounding volcanic islands, as well as volcanoes on Sulawesi and the Sangihe Islands.

The latter area is in a volcanic arc with the volcanoes of the Philippines. The most active volcanoes are Kelud and Merapi on Java Island, which are responsible for thousands of deaths from their eruptions in the region. Since 1000 AD, Kelud has erupted more than 30 times, with the largest eruption measuring 5 Volcanic Explosivity Index (VEI).

Merapi has erupted more than 80 times. The International Association of Volcanology and Chemistry of the Earth’s Interior has named Merapi as the Volcano of the Decade since 1995 because of its very high volcanic activity

Until 2012, Indonesia has 127 active volcanoes with approximately 5 million people living in the vicinity. Since 26 December 2004, after the massive earthquake and tsunami occurred, all volcanic eruption patterns have changed, for example Mount Sinabung, which last erupted in the 1600s, but suddenly reactivated in 2010 and erupted in 2013. 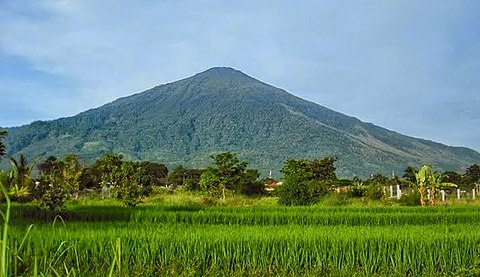 The main source of the list below is taken from the book “Volcanoes of the World” compiled by two volcanologists, namely Tom Simkin and Lee Siebert, which lists active volcanoes in the last 10,000 years (Holocene). Specifically for Indonesia, Simkin and Siebert used a catalog of active volcanoes from the International Association of Volcanology and Chemistry of the Earth’s Interior.

Simkin and Siebert’s book is the book that contains the most complete list of volcanoes in Indonesia, although the accuracy of records of eruptions and casualties varies in different regions. A complementary source of the most recent volcanic data is obtained from the Indonesian Volcanological Survey, the government agency responsible for monitoring and recording volcanic activity and geological disaster mitigation in Indonesia. 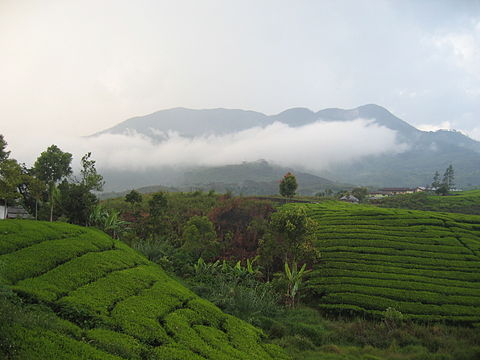 Sumatra Sumatra’s geography is dominated by a mountain range called the Bukit Barisan. This mountain range stretches nearly 1,700 km (1,056 mi) from north to south of the island, and is formed by the movement of the Australian tectonic plates. This plate moves at a convergence rate of 5.5 cm / year, which causes major earthquakes on the western side of Sumatra, including the 2004 Indian Ocean earthquake. This tectonic movement not only causes earthquakes, but also the formulation of magma chambers under the island. One of 35 active volcanoes, namely Pulau Weh, is separated from mainland Sumatra. This separation was caused by a large eruption which caused the land between Weh and Sumatra to be inundated by sea water in the Pleistocene era. The largest volcano in Sumatra is the Toba supervolcano, 100 km (62 mi) × 30 km (19 mi) deep in Lake Toba, which was formed after the collapse of the caldera (about 74,000 BP). This eruption is estimated to have reached the scale of 8 VEI, the largest volcanic eruption known in the last 27 million years. The highest peak in the Bukit Barisan mountain range is Mount Kerinci, with an altitude of 3,800 m (12,467 ft) above sea level.
The list above is of volcanoes which are classified in the geographical area of Sumatra. There are 37 volcanoes. 22 vulcanoes are stratovulkan, 4 vulcanoes in caldera sightings, 1 fumarol vulcanoe, and the other vulcanoes shapes are; complex, shield, supervolcano, and unknown. 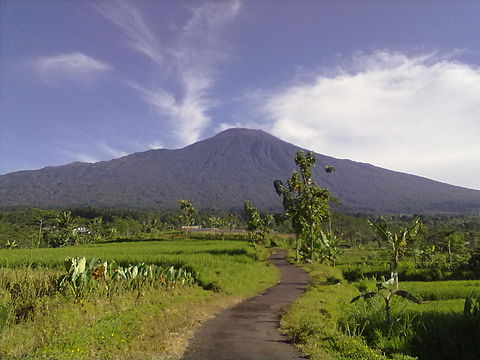 The Sunda Strait separates the islands of Sumatra and Java, with the volcanic island of Krakatau standing between the two. Krakatoa erupted violently in 1883, wiping out two-thirds of the island and leaving a large caldera under the sea. This powerful explosion was heard as far as the island of Rodrigues near Mauritius (about 4800 kilometers (3000 mi) away). A new parasitic cone, called Anak Krakatau, emerged from the ocean in the middle of the caldera in 1930. Other islands of Krakatau formed by the 1883 eruption were Sertung, Panjang, and Rakata.

Several volcanoes are grouped together in the list below due to their close proximity. Semeru, Bromo, Merapi, and Kelud are the three most active volcanoes on the island of Java. Mount Semeru has continued to erupt since 1967. Mount Merapi has been named the Volcano of the Decade since 1995. Ijen has a unique, colorful caldera lake which is a natural reservoir with high acidity (pH <0.3). There is sulfur mining activity at Ijen, where miners collect highly concentrated sulfur by hand only.

The list above is of volcanoes which are classified in the geographical area of Sunda Strait and Java. There are 44 volcanoes. 35 vulcanoes are stratovulkan, 1 vulcanoe in caldera sighting, 1 fumarol vulcanoe, 4 vulcanoes are complex, and others. 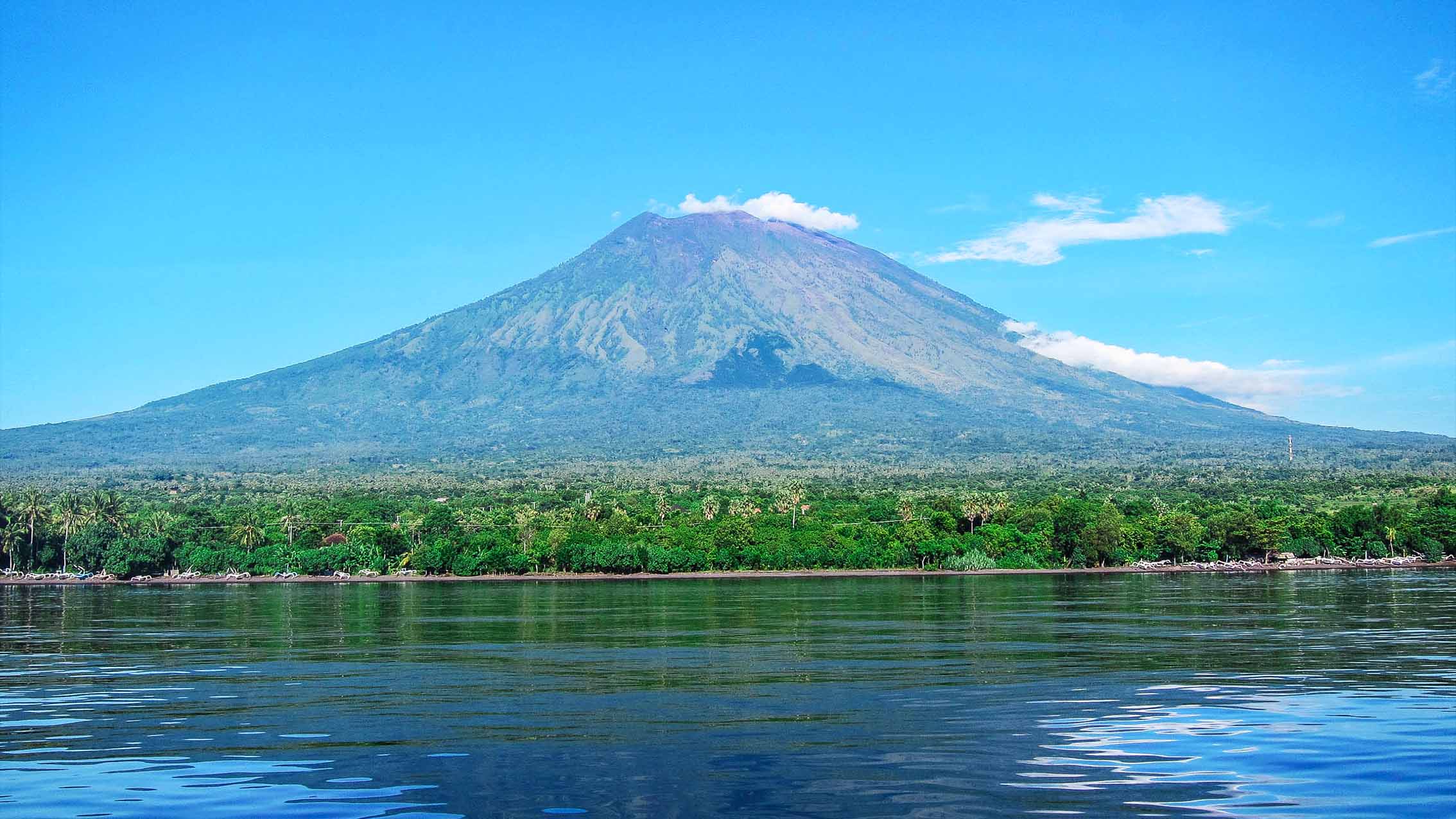 The Lesser Sunda Islands are small islands stretching from west to east, consisting of the islands of Bali, Lombok, Sumbawa, Flores, Sumba and Timor; all of which are located on the fringes of the Australian continental shelf. The volcanoes in this region are formed due to the oceanic crust and the movement of the continental shelf.

Some volcanoes form an island completely, for example Pulau Sangeang Api. Mount Tambora on the island of Sumbawa erupted on April 5, 1815, with a scale of 7 VEI and is considered the greatest eruption in recorded history.

Some of the active volcanoes in the small Sundanese islands, for example; Agung, Rinjani, Kelimutu, and Egon.

The list above is of volcanoes which are classified in the geographical area of Lesser Sunda Islands. There are 30 volcanoes. 14 vulcanoes are stratovulkan, 4 vulcanoes in caldera sightings, 1 vulcano are under the sea, 2 vulcanoes are fumarol, and other vulcanoes are complex and unkwown. 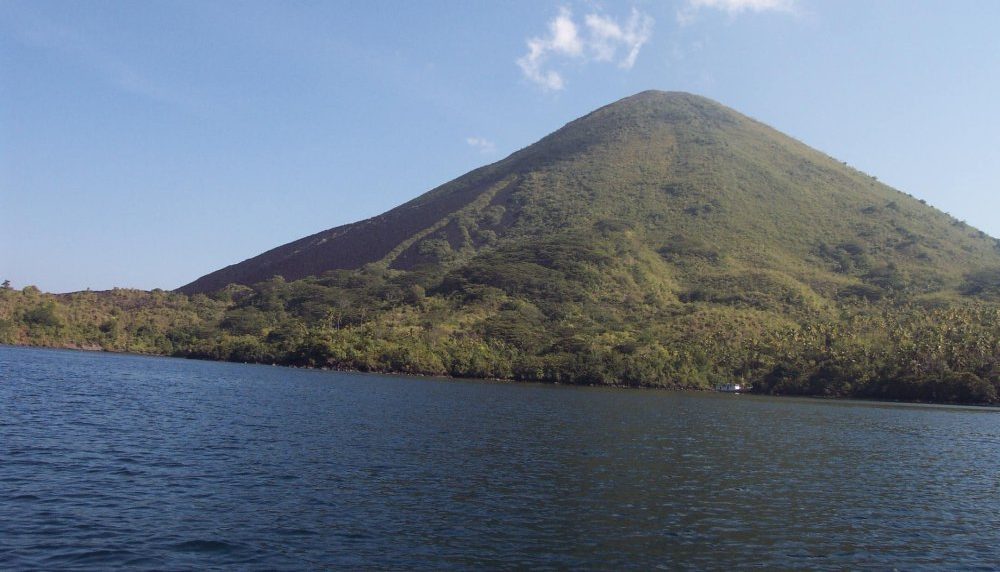 The Banda Sea to the south of the Maluku Islands consists of a group of small islands. Three major underwater tectonic plates; Eurasia, the Pacific, and Indo-Australia, have met there since Mesozoic times. Most of the volcanoes in the Banda Sea are islands, but there are also several underwater volcanoes.

Four peninsulas dominate the shape of Sulawesi. The center consists of high mountain areas, but most of the mountains there are not volcanoes. Active volcanoes exist on the northern peninsula to the Sangihe Islands. The Sangihe Islands mark the border with the Philippines.

Halmahera Island in the north of the Maluku Islands is formed by the movement of three tectonic plates which produce two intersecting mountains. A volcanic arc stretches from north to south in western Halmahera, some of which are volcanic islands, for example Gamalama and Tidore.

The island where Gamalama is located is Ternate, which has been the center of the spice trade since the Portuguese arrived on the island in 1512. Due to its position as a trading center since the Age of Exploration, historical records of volcanic eruptions in Halmahera date back to the 16th century.

The list above is of volcanoes which are classified in the geographical area of Halmahera. There are 14 (out of 15) these volcanoes. Mostly, 12 mountains, are stratovulkan. Others in the form of caldera and pyroclastic cones.