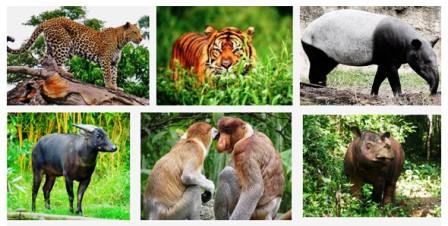 In Indonesia, according to Law Number 5 of 1990 concerning the Conservation of Living Natural Resources and their Ecosystems, National Parks are defined as natural conservation areas that have native ecosystems, managed by a zoning system that is used for research, science, education, and cultivation support purposes. tourism, and recreation.

This is the list of the national parks of Indonesia. Of the 54 national parks, 6 are World Heritage Sites, 9 are part of the World Network of Biosphere Reserves and 5 are wetlands of international importance under the Ramsar convention. A total of 9 parks are largely marine. Around 9% of the Indonesia surface are national parks (less than the 25% of Germany or the 33% of France).

The first group of five Indonesian national parks were established in 1980. This number increased constantly reaching 41 in 2003. In a major expansion in 2004, nine more new national parks were created, raising the total number to 50. Mount Tambora was added in 2015. 3 more National Parks in Sumatra, Sulawesi, and Bangka Island were added in 2016.

There are 8 National Parks on the island of Kalimantan (Indonesia) and its surroundings. They are; Betung Kerihun, Bukit Baka Bukit Raya, Danau Sentarum, Gunung Palung, Kayan Mentarang, Kutai, Sebangau, and Tanjung Puting. One of them is the World Network of Biosphere Reserves (Tanjung Puting). Another one of them is the Ramsar Site (Danau Sentarum). Also, One of these National Parks is proposed as the World Heritage Site (Betung Kerihun).

There are 5 National Parks on the Maluku islands and Papua (Indonesia), and its surroundings. They are; Aketajawe Lolobata, Lorentz, Manusela, Teluk Cendrawasih, and Wasur. One of these National Parks is the Ramsar Site (Wasur), and other one of them is the World Hertage Sites (Lorentz).