Eda ngaden awak bisa, depang anake ngadanin’ - do not feel you can best, let someone else name or judge for themselves

The Balinese originated from three periods of migration. The first waves of immigrants came from Java and Kalimantan in prehistoric times and were of proto-Malay stock.

The second wave of Balinese came slowly over the years from Java during the Hindu period. The third and final wave came from Java, between the 15th and 16th centuries, about the same time as the conversion to Islam in Java, causing aristocrats and peasants to flee to Bali after the collapse of the Javanese Hindu Majapahit Empire in order to escape Mataram’s Islamic conversion.

This in turn reshaped the Balinese culture into a syncretic form of classical Javanese culture mixed with many Balinese elements. 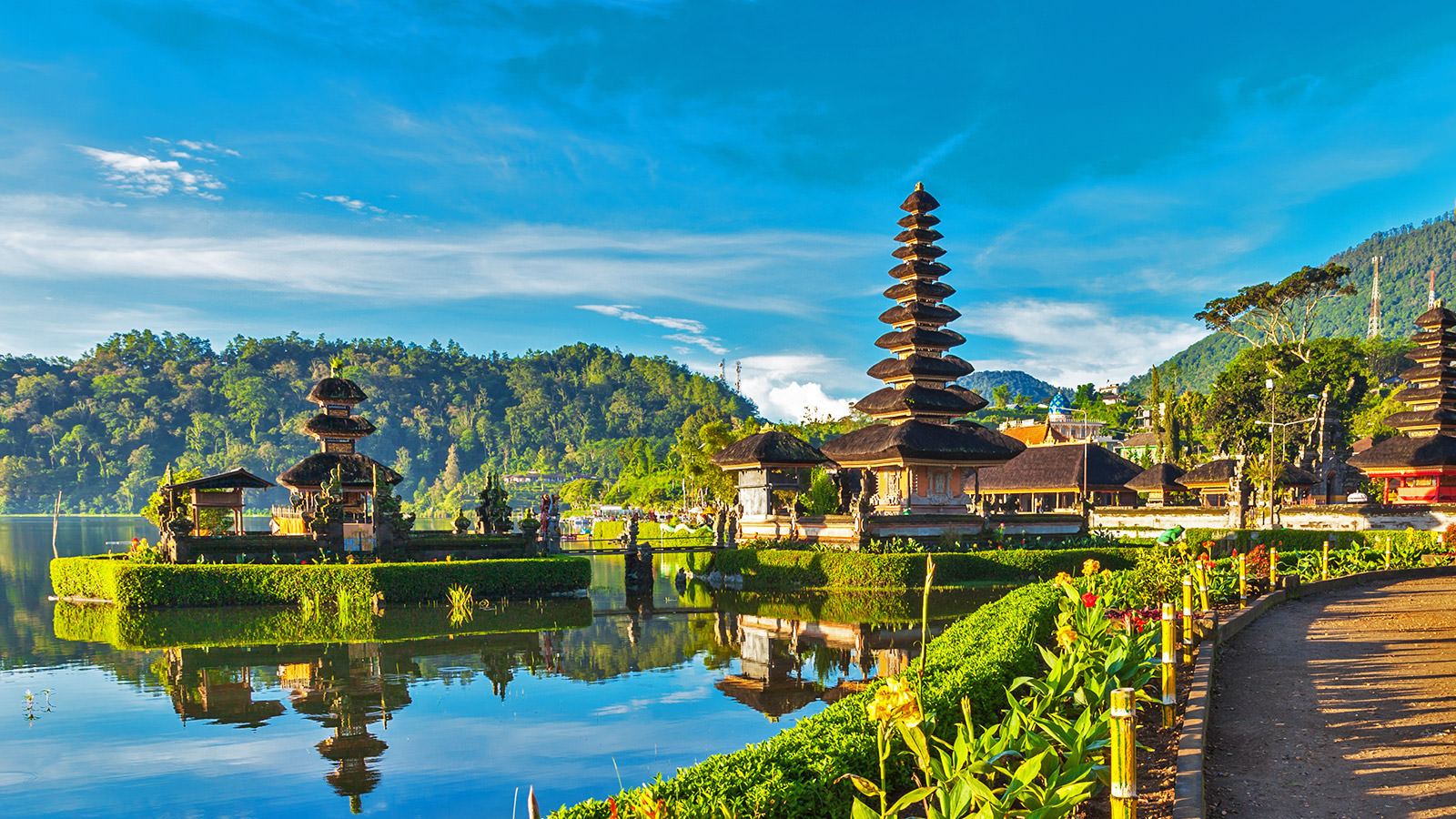 Balinese culture is a mix of Balinese Hindu-Buddhist religion and Balinese customs. It is perhaps most known for its dance, drama and sculpture. The island is also known for its Wayang kulit or Shadow play theatre. Even in rural and neglected villages, beautiful temples are a common sight; and so are skillful gamelan players and talented actors. Even layered pieces of palm leaf and neat fruit arrangements made as offerings by Balinese women have an artistic side to them.

Works of art made by amateur Balinese artists are regarded as a form of spiritual offering, and therefore these artists do not care about recognition of their works. Balinese artists are also skilled in duplicating art works such as carvings that resemble Chinese deities or decorating vehicles based on what is seen in foreign magazines.

The culture is noted for its use of the gamelan in music and in various traditional events of Balinese society. Each type of music is designated for a specific type of event. For example, music for a piodalan (birthday celebration) is different from music used for a metatah (teeth grinding) ceremony, just as it is for weddings, Ngaben (cremation of the dead ceremony), Melasti (purification ritual) and so forth. 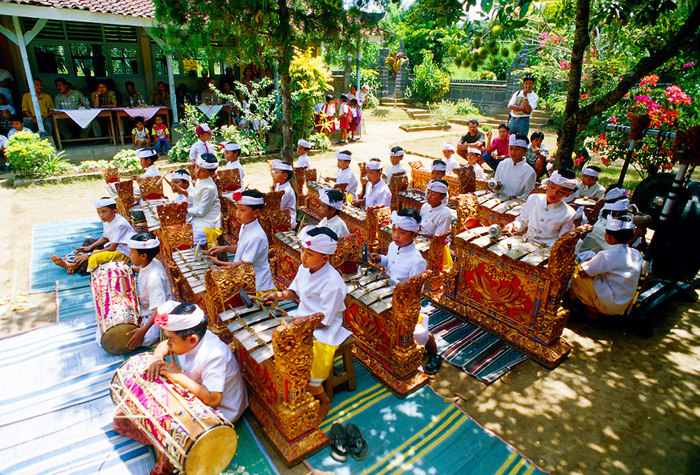 The diverse types of gamelan are also specified according to the different types of dance in Bali. According to Walter Spies, the art of dancing is an integral part of Balinese life as well as an endless critical element in a series of ceremonies or for personal interests

In the Balinese naming system, a person’s rank of birth or caste is reflected in the name

Traditionally, displaying female breasts is not considered immodest. Balinese women can often be seen with bared chests; however, a display of the thigh is considered immodest. In modern Bali these customs are normally not strictly observed, but visitors to Balinese temples are advised to cover their legs.

Bali is renowned for its diverse and sophisticated art forms, such as painting, sculpture, woodcarving, handcrafts, and performing arts. Balinese cuisine is also distinctive. Balinese percussion orchestra music, known as gamelan, is highly developed and varied. Balinese performing arts often portray stories from Hindu epics such as the Ramayana but with heavy Balinese influence. Famous Balinese dances include pendet, legong, baris, topeng, barong, gong keybar, and kecak (the monkey dance). Bali boasts one of the most diverse and innovative performing arts cultures in the world, with paid performances at thousands of temple festivals, private ceremonies, or public shows. 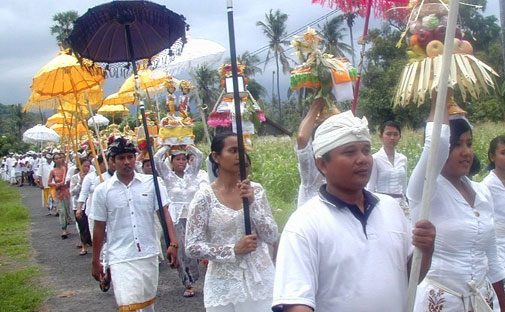 Throughout the year, there are a number of festivals celebrated locally or island-wide according to the traditional calendars. The Hindu New Year, Nyepi, is celebrated in the spring by a day of silence. On this day everyone stays at home and tourists are encouraged (or required) to remain in their hotels. On the day before New Year, large and colourful sculptures of Ogoh-ogoh monsters are paraded and burned in the evening to drive away evil spirits. Other festivals throughout the year are specified by the Balinese pawukon calendrical system.

Celebrations are held for many occasions such as a tooth-filing (coming-of-age ritual), cremation or odalan (temple festival). One of the most important concepts that Balinese ceremonies have in common is that of désa kala patra, which refers to how ritual performances must be appropriate in both the specific and general social context. Many of the ceremonial art forms such as wayang kulit and topeng are highly improvisatory, providing flexibility for the performer to adapt the performance to the current situation.

These are some of the heritage or cultural relics of the past, becoming one way of life for a group of people. This unique culture and traditions are still preserved today. Traditions that are based on beliefs, such as the belief that disaster will occur if these traditions or rituals are not carried out, or because they are related to religious beliefs to honor God or ancestors, so that it becomes a culture for Balinese tribal people. 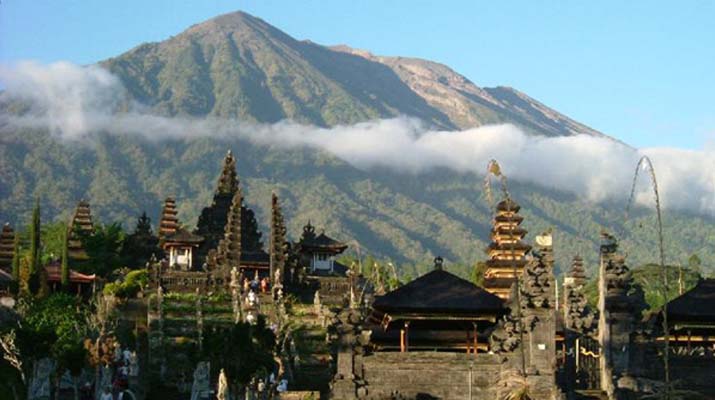 Many celebrations call for a loud, boisterous atmosphere with much activity and the resulting aesthetic, ramé, is distinctively Balinese. Often two or more gamelan ensembles will be performing well within earshot, and sometimes compete with each other to be heard. Likewise, the audience members talk amongst themselves, get up and walk around, or even cheer on the performance, which adds to the many layers of activity and the liveliness typical of ramé.

Kaja and kelod are the Balinese equivalents of North and South, which refer to one’s orientation between the island’s largest mountain Gunung Agung (kaja), and the sea (kelod). In addition to spatial orientation, kaja and kelod have the connotation of good and evil; gods and ancestors are believed to live on the mountain whereas demons live in the sea. Buildings such as temples and residential homes are spatially oriented by having the most sacred spaces closest to the mountain and the unclean places nearest to the sea.

The three genres are represented by 17 dances, which describe the functions and traditions of life in Balinese society, they are: The Wali dance is danced in every activity of traditional and Hindu religious ceremonies in Bali. At the temple, this dance is performed in the innermost area of the temple (offal). Bebali is a type of ceremonial dance, usually performed in the central courtyard of the temple. This dance is between sacred and entertainment. Balih-balihan is a type of dance that is non-religious in nature and tends to be entertaining. Displayed on the front page or outside the temple. 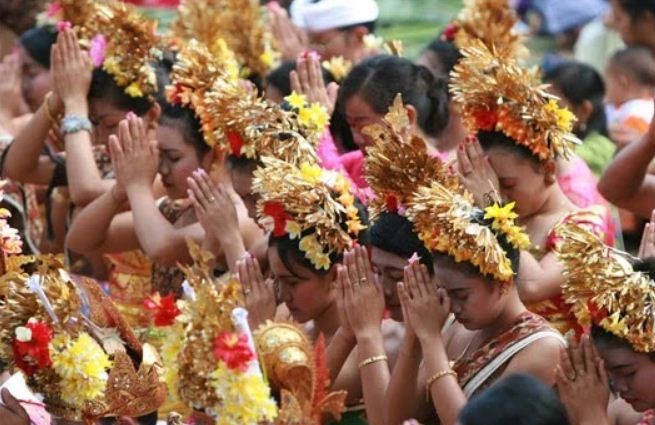 Most temples have an inner courtyard and an outer courtyard which are arranged with the inner courtyard furthest kaja. These spaces serve as performance venues since most Balinese rituals are accompanied by any combination of music, dance and drama.

The performances that take place in the inner courtyard are classified as wali, the most sacred rituals which are offerings exclusively for the gods, while the outer courtyard is where bebali ceremonies are held, which are intended for gods and people.

Lastly, performances meant solely for the entertainment of humans take place outside the walls of the temple and are called bali-balihan. This three-tiered system of classification was standardised in 1971 by a committee of Balinese officials and artists to better protect the sanctity of the oldest and most sacred Balinese rituals from being performed for a paying audience. 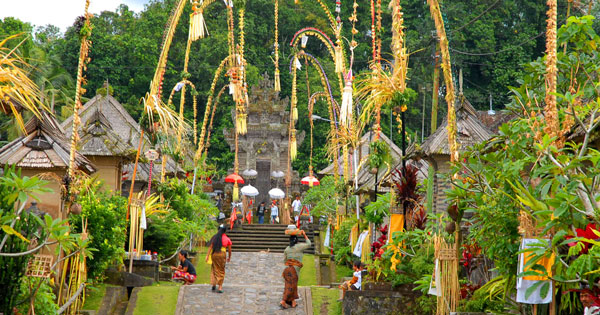 Balinese architecture is developed from Balinese ways of life, their spatial organization, their communal-based social relationships, as well as philosophy and spirituality influenced its design; much owed to Balinese Hinduism. The common theme often occur in Balinese design is the tripartite divisions.

Traditional Balinese architecture, adheres to strict and sacred laws of building, allowing much open space and consisting of a spacious courtyard with many small pavilions, ringed by wall to keep out evil spirits and decorated with guardian statues. The philosophical and conceptual basis underlining development of Balinese traditional architecture includes several concepts such as:

According to the Balinese philosophy, dynamism in life will be achieved if there is a harmonious relationship between aspects of palemahan, pawongan, and parahyangan. Therefore, the construction of traditional houses must include this aspect which is known as “Tri Hita Karana”. Pawongan are residents of the house, palemahan means there must be a good relationship between residents and their environment.

Tri Angga: the conception of hierarchy from microcosm, middle realm, and macrocosm. It is also connected to the next concept tri loka.

Arga Segara or Kaja Kelod: the sacred axis between. arga or kaja (mountain) and segara or kelod (sea). Mountain region are considered as parahyangan, the abode of hyang or gods, middle plain in between are the realm of human, and the sea as the realm of sea monster and demons.

Other than artistic and technical mastery, all Balinese architect (Balinese:Undagi) are required to master these Balinese philosophical concepts concerning form, architecture, and spatial organization. 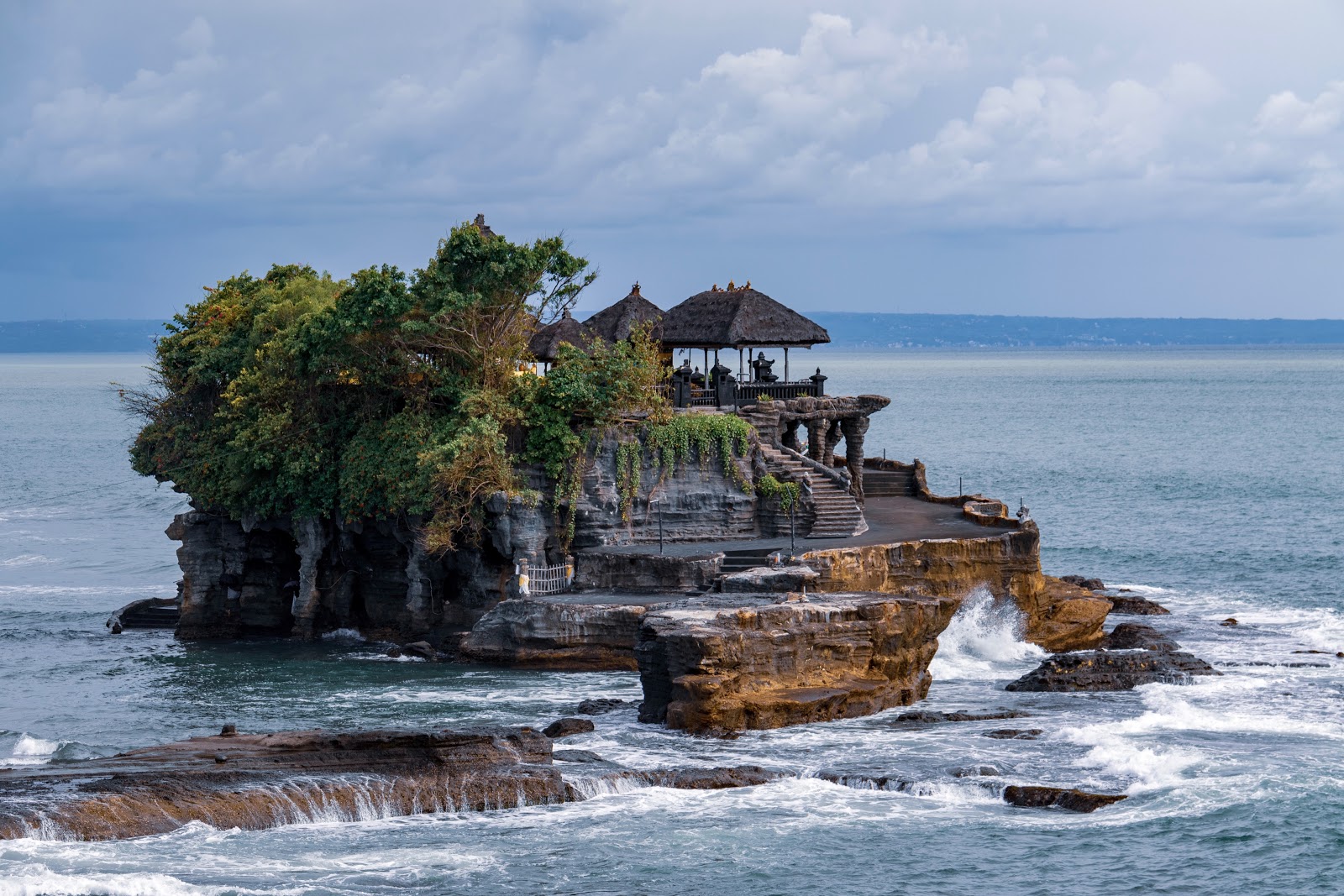 Balinese temple or pura (Sanskrit for:”walled city”) are designed as an open air place of worship within enclosed walls, connected with a series of intricately decorated gates between its compounds. This walled compounds contains several shrines, meru (towers), and bale (pavilions).

The design, plan and layout of the pura follows the Tri Mandala concept of Balinese space allocation. The three mandala zones are Nista Mandala (jaba pisan): the outer zone, Madya Mandala (jaba tengah): the middle zone, and Utama Mandala (jero): the holiest and the most sacred zone.

There are 6 temples on the island of Bali and its surroundings. The temple is a replica building where the gods live, with messages conveyed through architecture, reliefs, and statues that are never separated from elements of spirituality.
a time when we grew and thrived playing in nature with friends 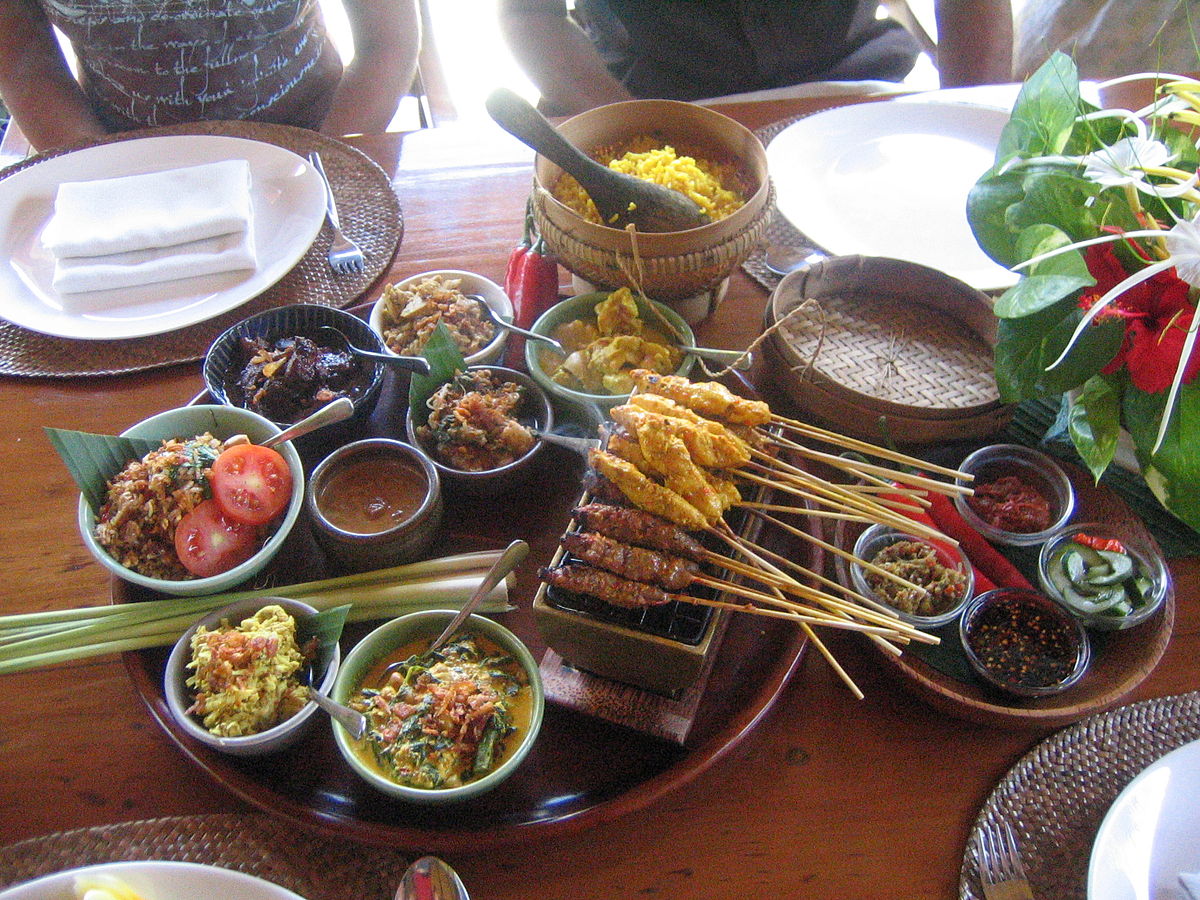 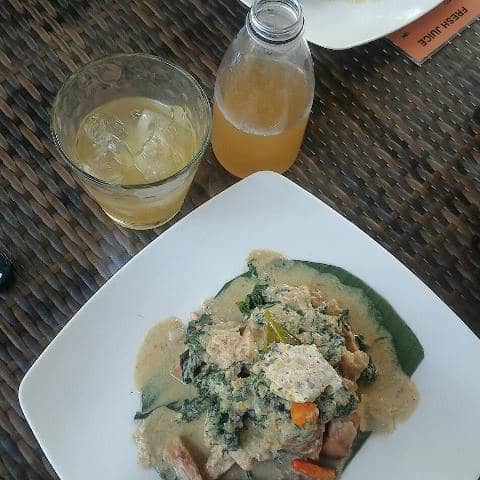 The island’s inhabitants are predominantly Hindu and have a somewhat different culinary tradition to other parts of Indonesia, with religious festivals and celebrations including many special meals prepared as offerings, as well as other dishes that are consumed communally during the festivities.

Rice is almost always consumed as a staple food accompanied by vegetables, meat and seafood. Pork, chicken, fruit, vegetables and seafood are widely used, but like most Hindus, Beef is never or rarely consumed.