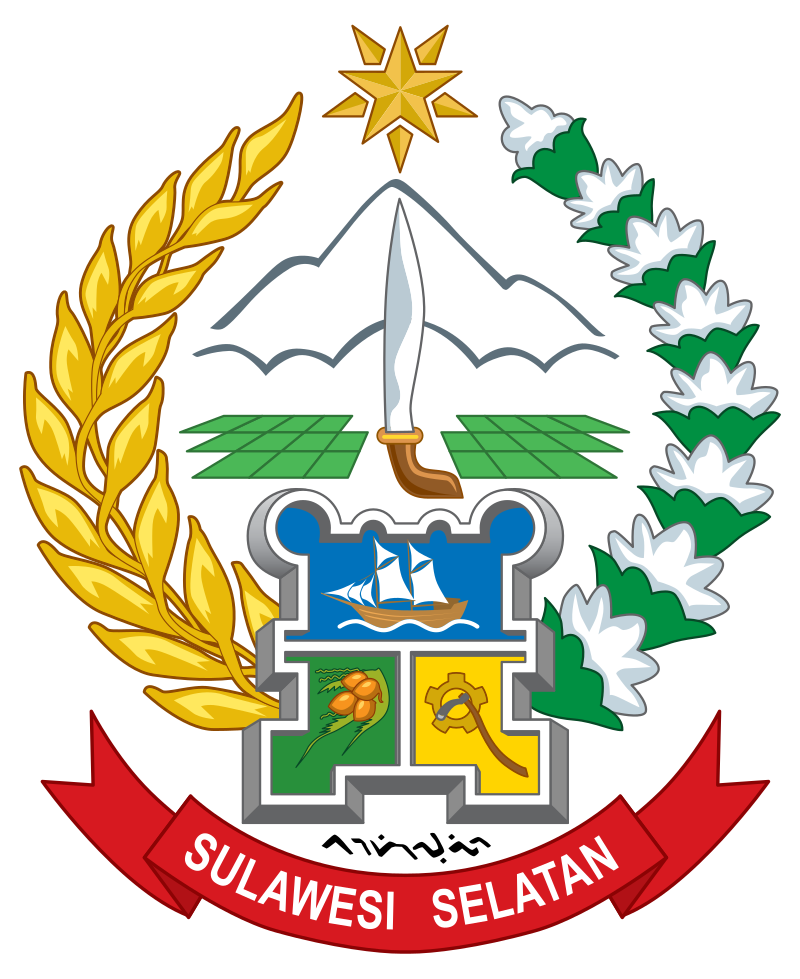 The main ethnic groups in South Sulawesi are the Buginese, Makassarese, Toraja, and Mandar. The economy of the province is based on agriculture, fishing, and mining of gold, magnesium, iron and other metals. The pinisi, a traditional Indonesian two-masted sailing ship, is still used widely by the Buginese and Makassarese, mostly for inter-insular transportation, cargo, and fishing purposes within the Indonesian archipelago.

more..
During the golden era of the spice trade, from the 15th to 19th centuries, South Sulawesi served as the gateway to the Maluku Islands. There were a number of small kingdoms, including two prominent ones, the Kingdom of Gowa near Makassar and the Bugis kingdom located in Bone. The Dutch East India Company (VOC) began operating in the region in the 17th century. VOC later allied with the Bugis prince, Arung Palakka, and they defeated the kingdom of Gowa. The king of Gowa, Sultan Hasanuddin was forced to sign a treaty which greatly reduced the power of Bungaya Gowa. 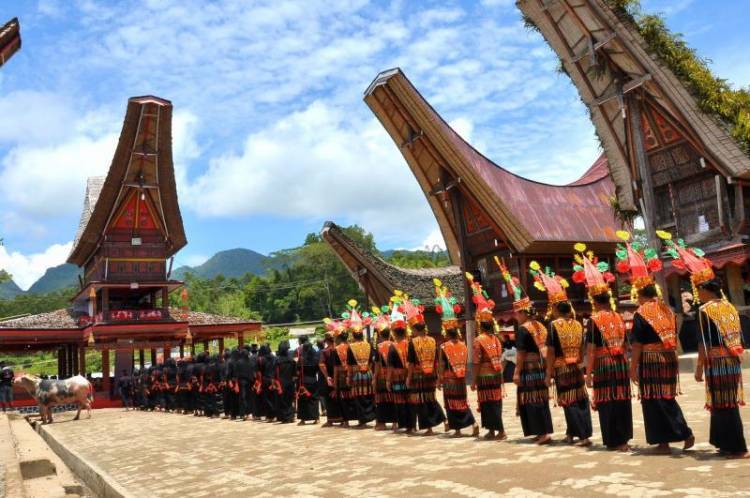 Before the Proclamation of Independence of the Republic of Indonesia, South Sulawesi, consisted of a number of independent kingdoms and inhabited four ethnic groups, namely: Bugis, Makassar, Mandar, and Toraja.

There were three large empires with wide influence, namely Luwu, Gowa, and Bone, which in the sixteenth and seventeenth centuries achieved their glory and had trade relations and friendship with Europeans, Indians, Chinese, Malays, and Arabs.

After independence, Law Number 21 of 1950 was issued, whereby South Sulawesi became the administrative province of Sulawesi and subsequently in 1960 it became the autonomous region of South and Southeast Sulawesi based on Law Number 47 of 1960. 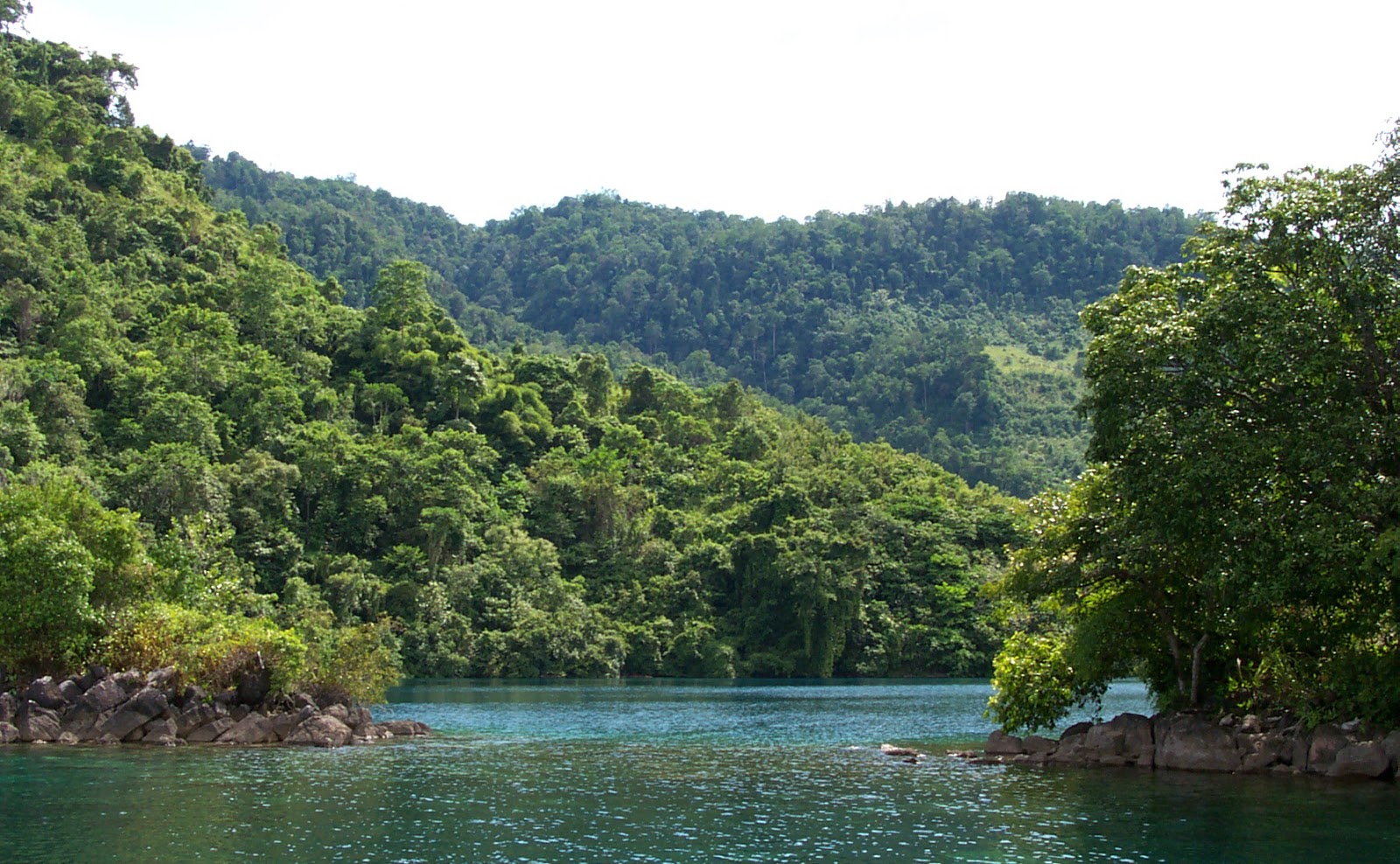 South Sulawesi is located at 4°20’S 120°15’E and covers an area of 46,717.48 square kilometres. The province is bordered by Central Sulawesi and West Sulawesi to the north, the Gulf of Bone and Southeast Sulawesi to the east, Makassar Strait to the west, and Flores Sea to the south. 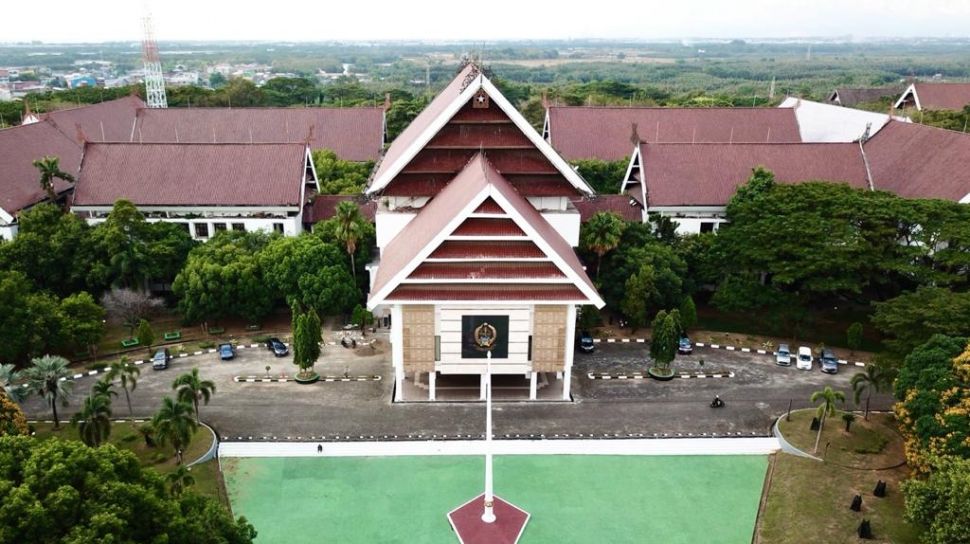 Five years after independence, the government issued Law No. 21 of 1950, which became the basis of the legal establishment for the Sulawesi province. Ten years later, the government passed Law No. 47 of 1960 which endorsed the formation of the South/Southeast Sulawesi province. Four years after that, with Act No. 13 of 1964, the provinces of South Sulawesi and Southeast Sulawesi were separated.

Forty years later, the South Sulawesi government was split into two, with the regencies of Majene, Mamasa, Mamuju, Pasangkayu, and Polewali Mandar being separated off into a new West Sulawesi province on 5 October 2004 under Act No. 26 of 2004.

The remaining South Sulawesi Province is divided into 21 regencies and three independent cities. 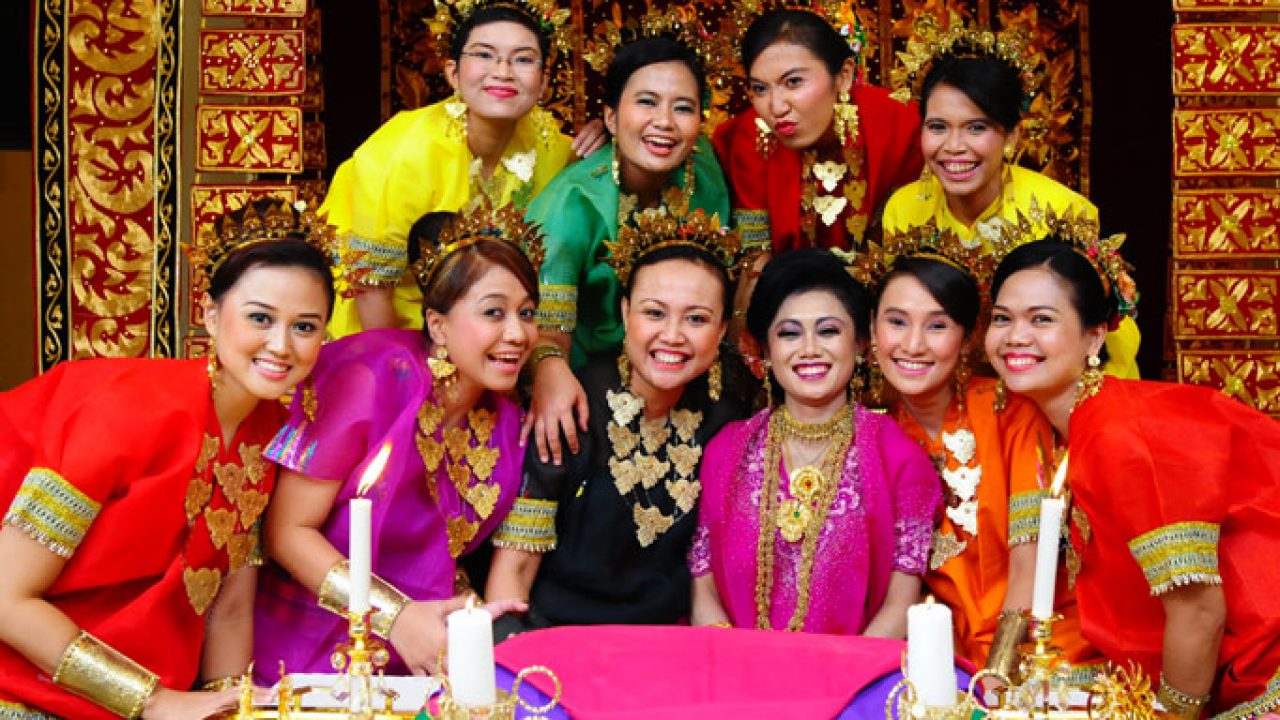 South Sulawesi has a diverse range of ethnic groups. The main three are: 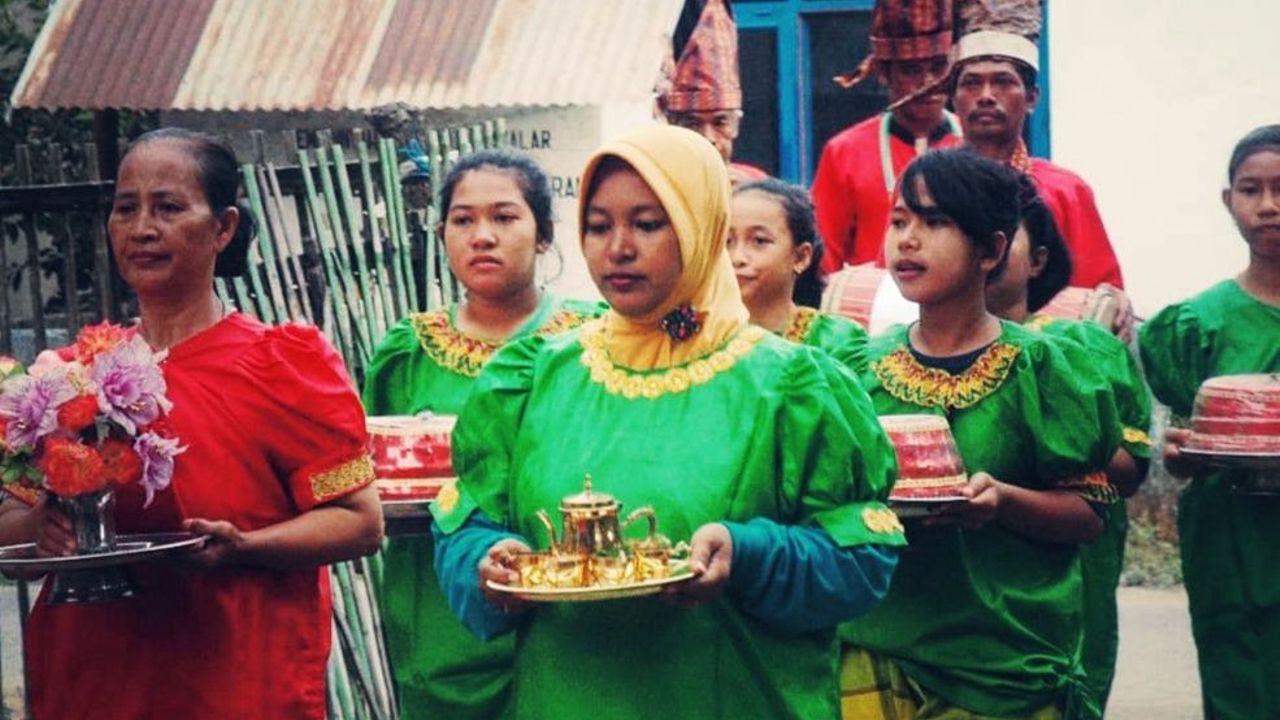 There are various languages and dialects spoken in South Sulawesi. The majority of them belong to the Malayo-Polynesian branch of Austronesian languages. Below is the list of major languages spoken in the province. 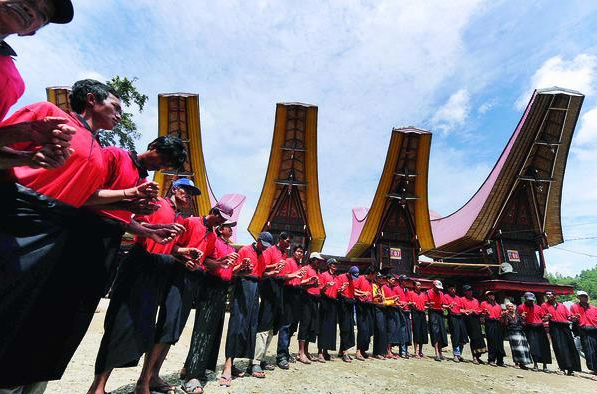 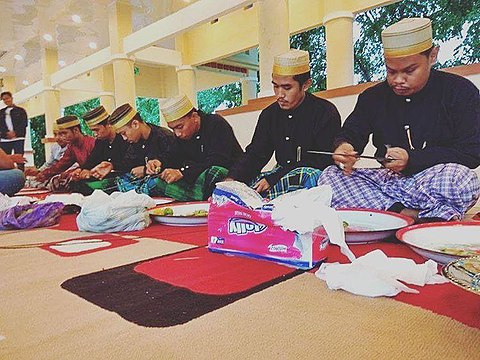 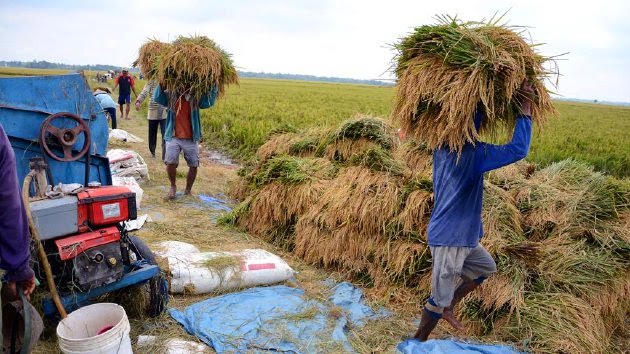 As one of the national rice granaries, South Sulawesi annually produces 2,305,469 tons of rice. Of that amount, rice designated for local consumption is around 884,375 tons and 1,421,094 tons of reserves remain for distribution to other eastern areas. 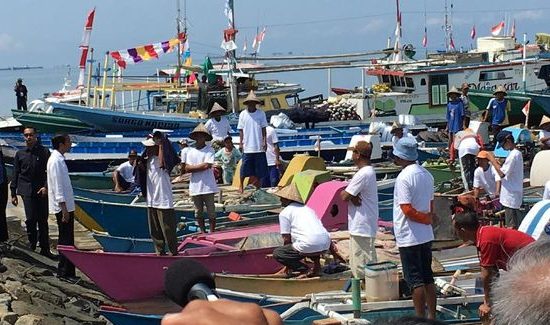 Rice is even exported to Malaysia, to the Philippines, and to Papua New Guinea. The locations of the largest rice production are in the Bone regency, in Soppeng, in Wajo, in Sidrap, in Pinrang, and in Luwu (Bodowasipilu Area)

The Tata Guna Horan Agreement (TGHK) of 2004 protects a lot of the forest in South Sulawesi creating a limited output of timber related products. Tuna and snapper-grouper are caught in large proportions and seaweed is grown to eat. Farms also have all of the typical animals such as chickens, cows, pigs, goats, etc.

One of the factors that contributes to the high GRDP of South Sulawesi is the mining sector. Nickel, gold, magnesium, iron, granite, lead, and stone products are mined. 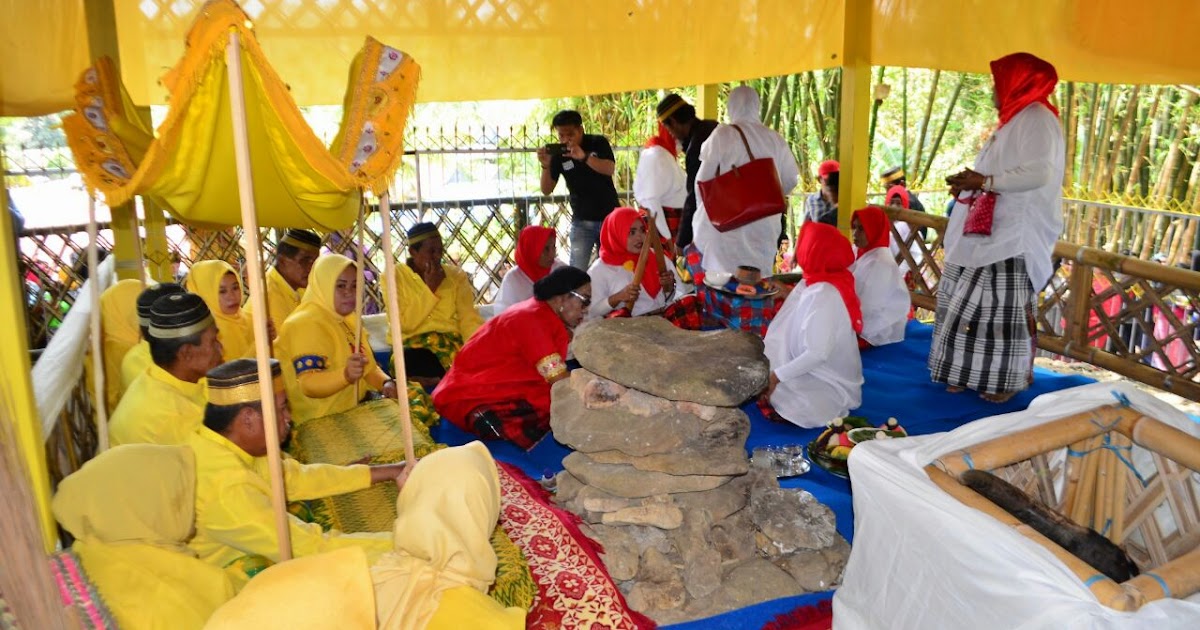 Siriʼ Na Pacce (ᨔᨗᨑᨗ ᨊ ᨄᨌᨙ)
is one cultural philosophy of the Bugis-Makassar Society which must be upheld. If one is a siri’ na pacce (not a person), then that person doesn’t exceed the behavior of animals, because it has no sense of shame, self-esteem, and social concerns.

The people of Bugis-Makassar teach morality in the form of advice about decency, prohibition, and the rights and obligations that dominate human action to preserve and defend himself and his honor. 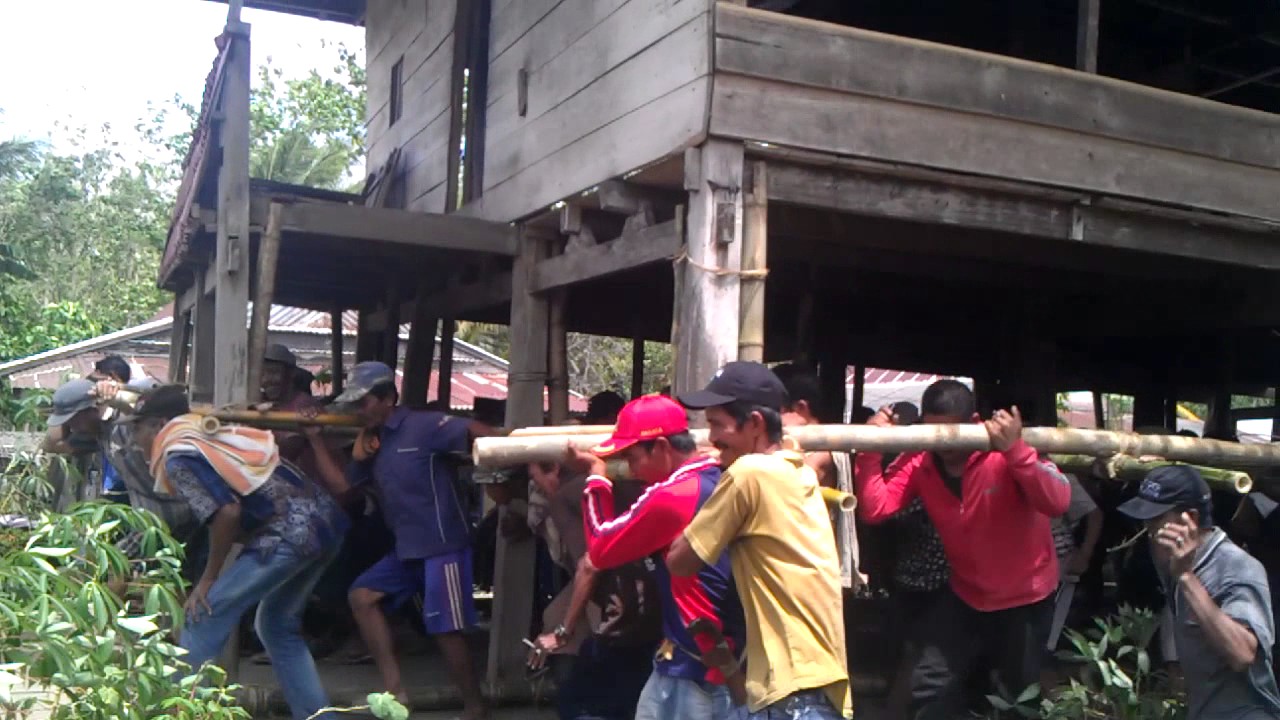 They have a very strong relationship with the view of Islam in terms of spirituality, where the strength of the soul can conquer the body. The core concept of siri’ na pacce covers all aspects of community life and is the identity of the Bugis-Makassar.

Siriʼ Nipakasiriʼ (ᨔᨗᨑᨗ ᨊᨗᨄᨀᨔᨗᨑᨗ)
occurs when someone insulted or treated someone outside the boundaries of reasonableness. Then he or his family had to enforce siri’ (ᨔᨗᨑᨗ) to restore the honour that has been deprived of, if not it would be called “mate siri’ (ᨆᨈᨙ ᨔᨗᨑᨗ)” or dead status and dignity as a human being. The Bugis-Makassar would rather die than live without siri’. 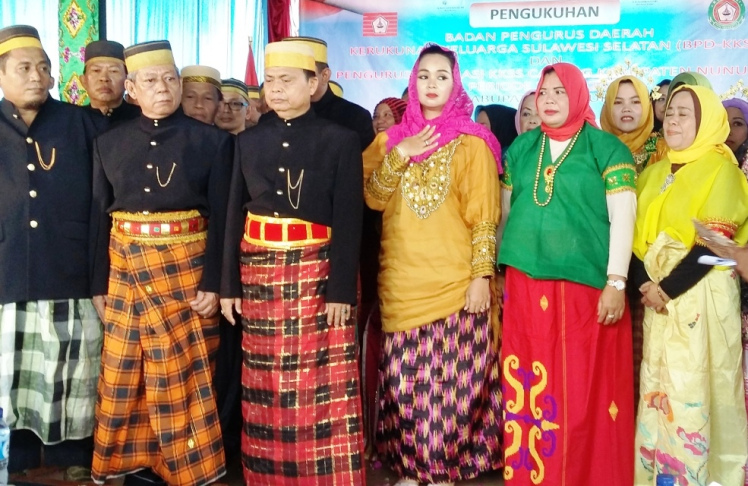 Siriʼ Masiriʼ (ᨔᨗᨑᨗ ᨆᨔᨗᨑᨗ)
is a way of life that intends to maintain, improve, or achieve a feat performed by earnest and hard.

Baju Bodo (ᨅᨍᨘ ᨅᨚᨉᨚ)[Makassar] or Waju Tokko (ᨓᨍᨘ ᨈᨚᨀᨚ)[Buginese] is the traditional costume of the women. Baju Bodo is rectangular and is usually short sleeved. According to customs, every color of the clothes worn by women shows the age or the dignity of the wearer. Clothing is often used for ceremonies such as weddings. But now, Baju Bodo is worn in other events such as dance competitions or to welcome guests. 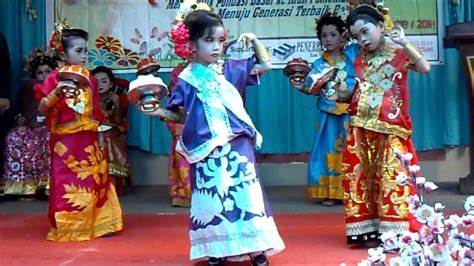 The traditional dance in South Sulawesi is a combination of dance elements in the form of movement, music, lighting and fashion used by dancers. The combination tells the message about the story of the habits of the community in the past. Like there is a dance that tells about the war, an expression of community excitement and welcoming guests.

In this case, the Bugis-Makassar tribe, whose numbers dominate in representing dance styles in South Sulawesi. However, the Toraja also have many traditional dances that are ritualistic. Some Mandar tribes also inhabit this province and have their own uniqueness in the arts. The rest are tribes of Duri, Pattinjo, Maiwa, Endekan, Pattae, and Ammatoa Kajang, who also paint the distinctive art of South Sulawesi. 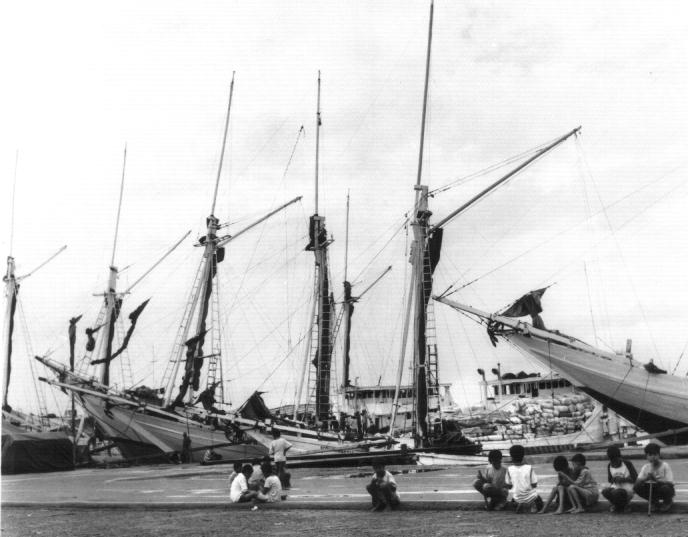 Main article: pinisi The pinisiʼ or phinisi (ᨄᨗᨊᨗᨔᨗ) is a traditional Indonesian two-masted sailing ship. It was mainly built by the Konjo tribe, a sub-ethnic group but was, and still is used widely by the Buginese and Makassarese, mostly for inter-insular transportation, cargo, and fishing purposes within the Indonesian archipelago.

The large mainsails differ from western style gaff rigs though, as they often do not have a boom and the sail is not lowered with the gaff. Instead it is reefed towards the mast, much like a curtain, thus allowing the gaff to be used as deck crane in the harbor. The lower part of the mast itself may resemble a tripod or is made of two poles. Pinisi may be 20 to 35 meters long and can weigh up to 350 tons. The masts may be as high as 30 meters above the deck. 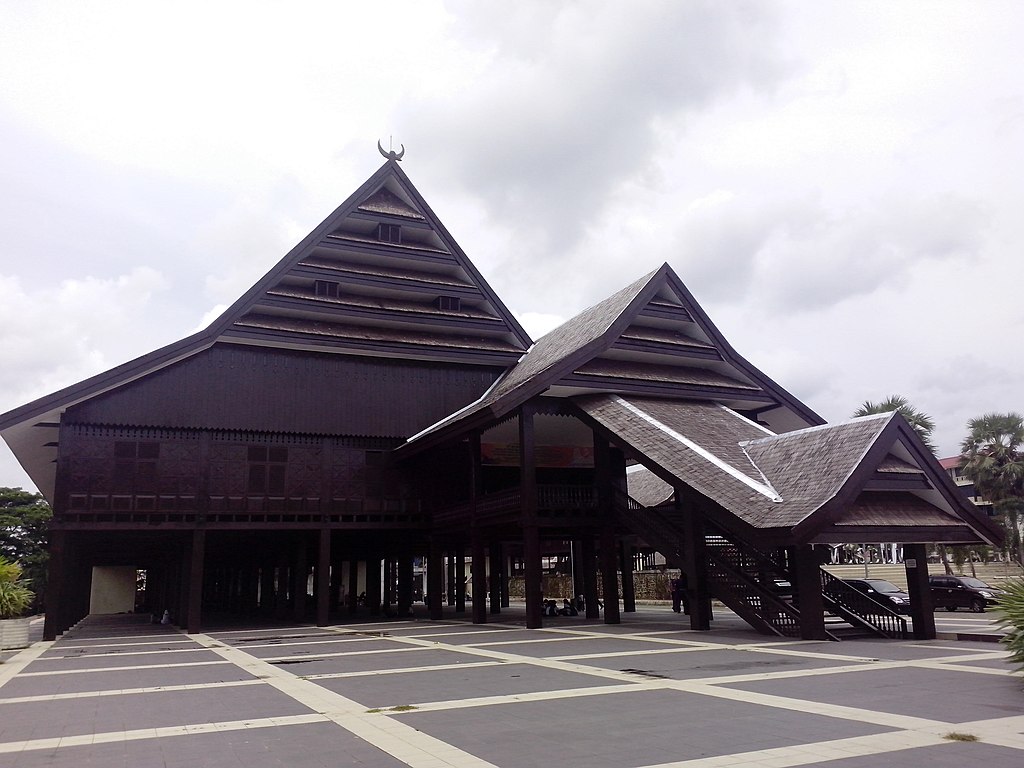 South Sulawesi has three types of traditional houses. The most known are the Rumah Panggung (Ballaʼ/Bola) from Bugis Makassar and the Tongkonan from Toraja.

Rumah Panggung ( Ballaʼ ᨅᨒ[Mks] / Bola ᨅᨚᨒ[Bug] ). Some of the considerations for the building of the house are should it face the sunrise, overlook a plateau, or overlook a cardinal direction.

Usually a good day or a month to build the house is determined by those who have the skill in that regard. Building the house is preceded by a ritual ceremony. 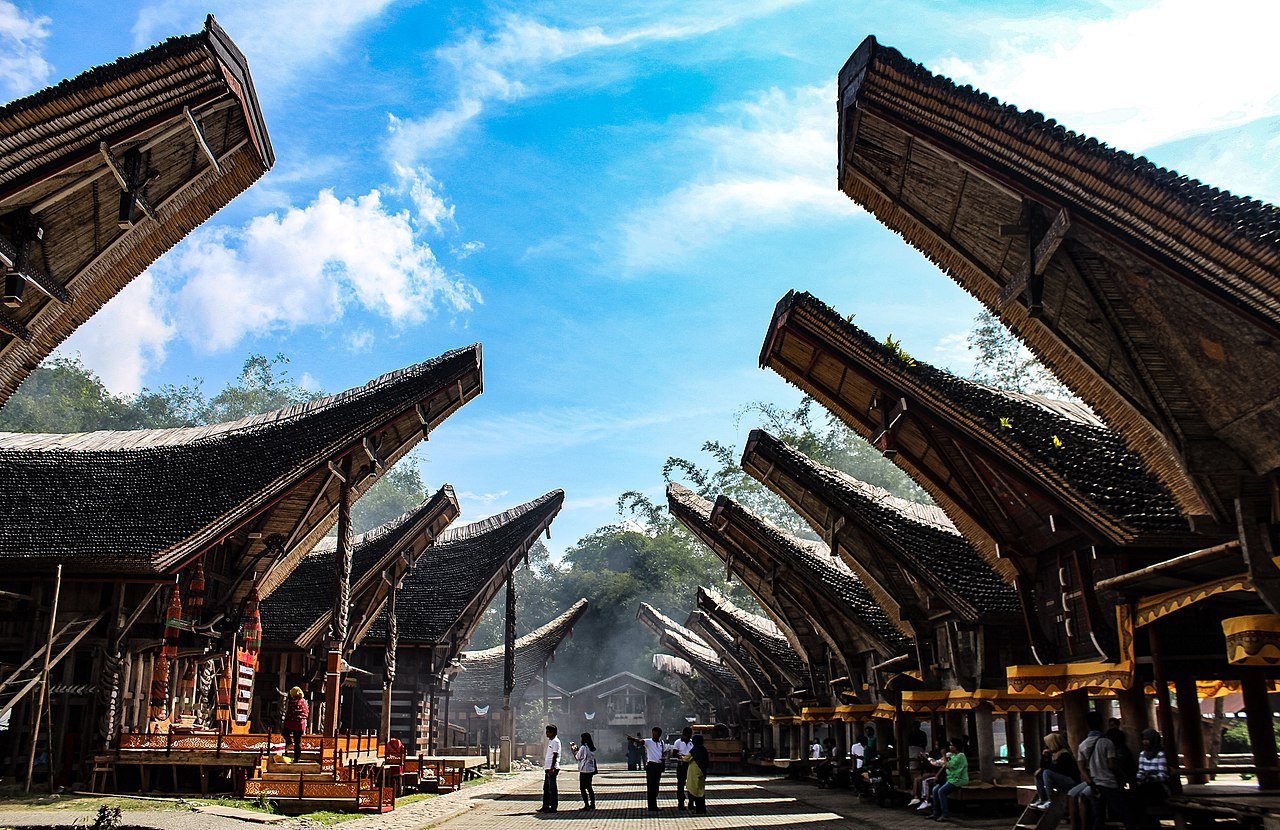 Tongkonan is the traditional ancestral house, or rumah adat of the Torajan people. Tongkonan have a distinguishing boat-shaped and oversized saddleback roof. Like most of Indonesia’s Austronesian-based traditional architecture, tongkonan are built on piles.

The construction of a tongkonan is laborious work and it is usually built with the help of all of one’s family members. In the original Toraja society, only nobles had the right to build tongkonan while commoners lived in smaller and less decorated homes called banua.

Rice and other crops such as bananas are abundant so almost all dishes are, like the Bugis Makassar cake, made from rice and bananas. Coastal areas of South Sulawesi eat Bolu (milkfish), Shrimp, Sunu (grouper), and Crab. In South Sulawesi, the traditional food is diverse, ranging from soup to traditional cakes.