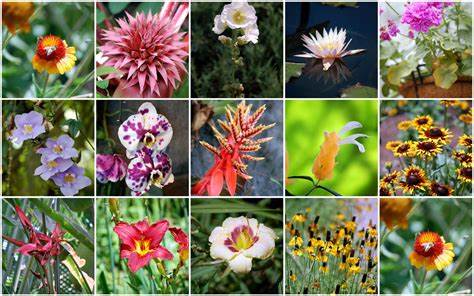 The origin of flora in Indonesia is a result of geographical and geological events involving the Asian and Australasian continents. The present island of New Guinea was connected with the Australian continent, forming a supercontinent called Gondwana. This supercontinent began to break up 140 million years ago, and the New Guinea region moved towards the equator. As a result, animals from New Guinea travelled to the Australian continent and vice versa, resulting in large amounts of speciation in the many new ecosystems. This exchange continued to occur until the two landmasses separated completely.

The Indonesian archipelago, home of the Spice Islands, has been known since ancient times as a source of spices, such as cloves, nutmeg, and black pepper. The Maluku Islands were, until the late eighteenth century, the only source of many economically significant spices. In the colonial era, cloves and nutmeg were the most valuable commodities behind gold and silver for European colonists. During the colonial era in Indonesia, the Dutch also created many plantations of coffee, tea and sugar cane, mostly in Java.

Indonesia’s terrestrial flora can be divided into several vegetation groups. The most important factor is rainfall, followed by temperature, both of which affect the availability of water. The distribution of Indonesian flora is dominated by broadleaf evergreen forests. This is mostly seen in the regions where population density is still relatively low, such as Sumatra, Borneo, Sulawesi and West Papua. On Java and Bali the vegetation is dominated by cultivated plants. Swamp forests, mangrove, and Nypa fruticans forests are found along the coast. On the mountainous regions, subalpine and alpine vegetation is dominant. In the lesser Sunda islands, where rainfall is not as plentiful as in other parts of Indonesia, grasslands are regularly seen.

According to the Conservation International, there are two biodiversity regions in Indonesia: Wallacea and Sundaland. The provinces of West Papua and Papua are also extremely biodiverse. Lorentz National Park, located in the province of Papua, was declared a World Heritage Site in 1999 by UNESCO.

Bunga bangkai raksasa (Amorphophallus titanum), the titan arum, is a flowering plant in the family Araceae. It has the largest unbranched inflorescence in the world. The inflorescence of the talipot palm, Corypha umbraculifera, is larger, but it is branched rather than unbranched. Amorphophallus titanum is endemic to Sumatra. Due to its odor, like that of a rotting corpse, the titan arum is characterized as a carrion flower, and is also known as the corpse flower or corpse plant (Indonesian: bunga bangkai—bunga means flower, while bangkai can be translated as corpse, cadaver, or carrion). The titan arum’s berries arrange in a regular cylindrical form that resembles the packing of spheres inside a cylindrical confinement. Those structures are also called columnar structures or crystals.

The odor (“fragrance”) of the titan arum resembles rotting meat, attracting carrion-eating beetles and flesh flies (family Sarcophagidae) that pollinate it. The inflorescence’s deep red color and texture contribute to the illusion that the spathe is a piece of meat. During bloom, the tip of the spadix is roughly human body temperature, which helps the perfume volatilize; this heat is also believed to assist in the illusion that attracts carcass-eating insects. Both male and female flowers grow in the same inflorescence. The female flowers open first, then a day or two following, the male flowers open. This usually prevents the flower from self-pollinating. 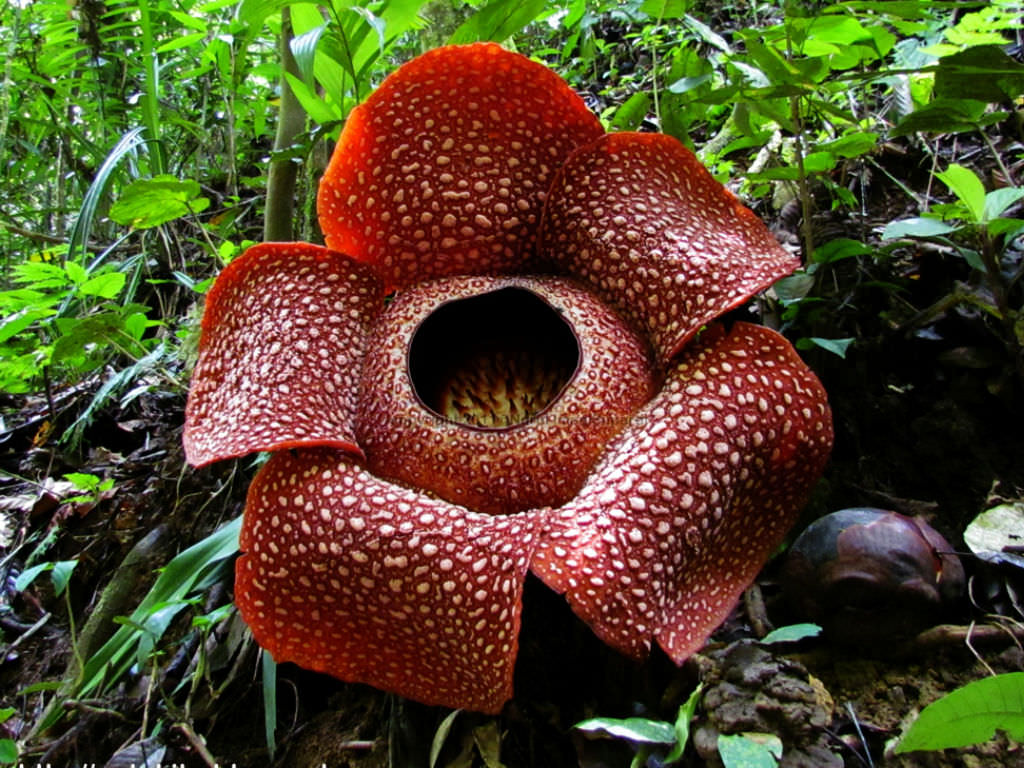 Padma raksasa (Rafflesia arnoldii), the corpse flower or giant padma, is a species of flowering plant in the parasitic genus Rafflesia. It is noted for producing the largest individual flower on Earth. It has a strong and unpleasant odor of decaying flesh. It is native to the rainforests of Sumatra and Borneo. Although there are some plants with larger flowering organs like the titan arum (Amorphophallus titanum) and talipot palm (Corypha umbraculifera), those are technically clusters of many flowers.

Rafflesia arnoldii is one of the three national flowers in Indonesia, the other two being the white jasmine (Jasminum sambac) and moon orchid (Phalaenopsis amabilis). It was officially recognized as a national “rare flower” (Indonesian: puspa langka) in Presidential Decree No. 4 in 1993. The flower of Rafflesia arnoldii grows to a diameter of around one meter (3.3 feet), weighing up to 11 kilograms (24 lb). These flowers emerge from very large, cabbage-like, maroon or dark brown buds typically about 30 cm (12 in) wide, but the largest (and the largest flower bud ever recorded) found at Mount Sago, Sumatra in May 1956 was 43 cm (17 in) in diameter. Indonesian researchers often refer to the bud as a ‘knop’ (knob). 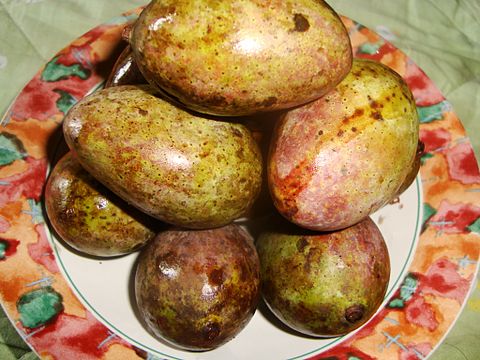 Mangga kasturi (Mangifera casturi), also called Kalimantan mango or kasturi, is a species of plant in the family Anacardiaceae. It was endemic to the Kalimantan region of Borneo, but is now considered extinct in the wild.

Kasturi mango tree can reach a height of 25 m with a trunk diameter of ± 40–115 cm. The bark is grayish white to light brown, sometimes there are small cracks or gaps ± 1 cm in the form of dead bark and is similar to Mangifera indica. The leaves are stemmed, elongated lanceolate with a pointed tip and on both sides of the middle leaf bone there are 12-25 side veins. Young leaves hang limp and dark purple.

The compound interest is bisexual with the shape of a racemos flower and is often hairy. The length of the flower stalk is ± 28 cm with very short stalks, which are 2-4 mm. The petals are oval elongated with a length of 2-3 mm. Elongated ovate corolla and fragrant flowers. The stamens are the same length as the corolla, the stamens are very short and like stamens that are attached to the protrusion of the base of the flower. The fruit is round to ellipsoid in shape with a weight of less than 80 grams, yellow or orange flesh and fibrous. Stone ore with thick walls. This mango bears fruit at the beginning of the rainy season or around January. 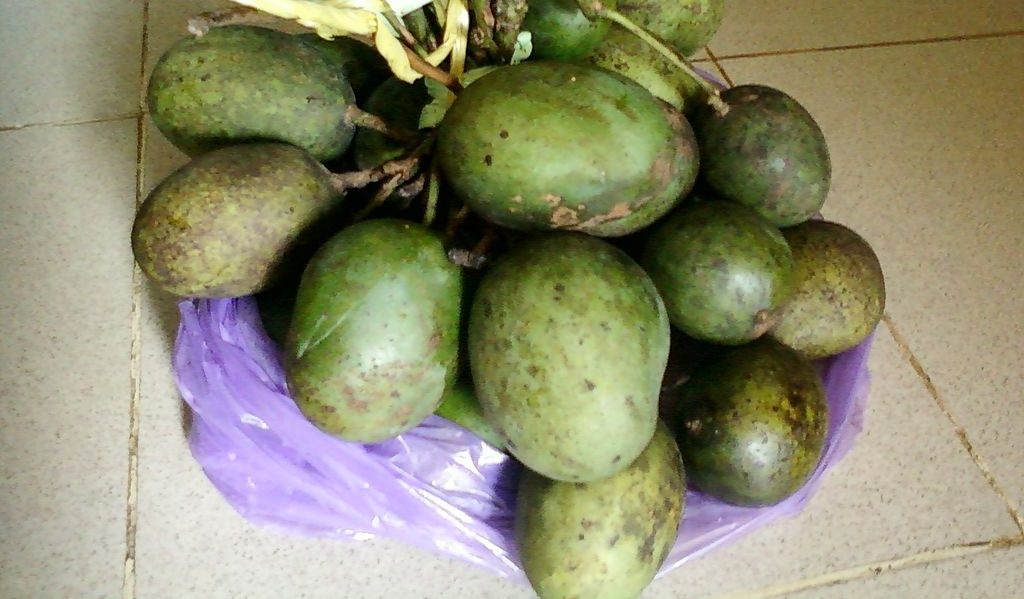 Mangga lalijiwa (Mangifera lalijiwa) is a species of plant in the family Anacardiaceae. It is native to Java and the Lesser Sunda Islands. It is threatened by habitat loss.

as the name suggests, is a kind of mango tree. Its scientific name is Mangifera lalijiwa, and it belongs to the Anacardiaceae family. It is called Lalijiwa because if you eat this mango, those who eat it will forget themselves because they are lulled by its very sweet taste. This mango is native to Java and the Lesser Sunda Islands, and its population is now thought to be threatened by habitat loss. This mango is known as Lalijiwa, Talijiwo, Pelem Savory (Jw.), Poh Gedang (Bl.), Paok Batu (Sas.), and Pao Taber (Mad.)