Rafflesia is a genus of parasitic flowering plants in the family Rafflesiaceae. The species have enormous flowers, the buds rising from the ground or directly from the lower stems of their host plants; one species has the largest flowers in the world. The genus contains approximately 28 species (including four incompletely characterized species as recognized in 1997 by Willem Meijer in the latest monograph on the genus), all found in Southeast Asia, mainly in Indonesia, Malaysia, Thailand and the Philippines.
more..

For Western Europe, it was first discovered by French surgeon and naturalist Louis Deschamps [fr] in Java between 1791 and 1794, but his notes and illustrations, seized by the British in 1803, were not available to western science until 1861.

The first British person to see one was Joseph Arnold in 1818, in the Indonesia rainforest in Bengkulu, Sumatra, after a Malay servant working for him discovered a flower and pointed it out to him. It was later named after Stamford Raffles, the leader of the expedition 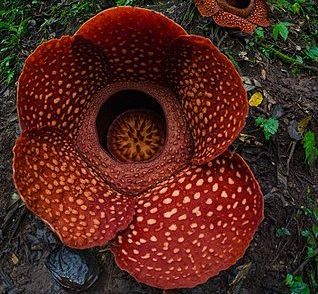 The plant has no stems, leaves or roots. It is a holoparasite of vines in the genus Tetrastigma (a plant in the Vitaceae, the grape vine family), spreading its absorptive organ, the haustorium, inside the tissue of the vine. The only part of the plant that can be seen outside the host vine is the five-petalled flower. In some species, such as Rafflesia arnoldii, the flower may be over 100 centimetres (40 in) in diameter, and weigh up to 10 kilograms (22 lb).

A Rafflesia that flowered in West Sumatra in 2019 was measured to be almost 4 feet (120 cm) in diameter, the largest flower ever recorded – 4 inches (10 cm) wider than the flower reported as the largest in 2017. Even one of the smallest species, R. baletei, has 12 cm (5 in) diameter flowers. 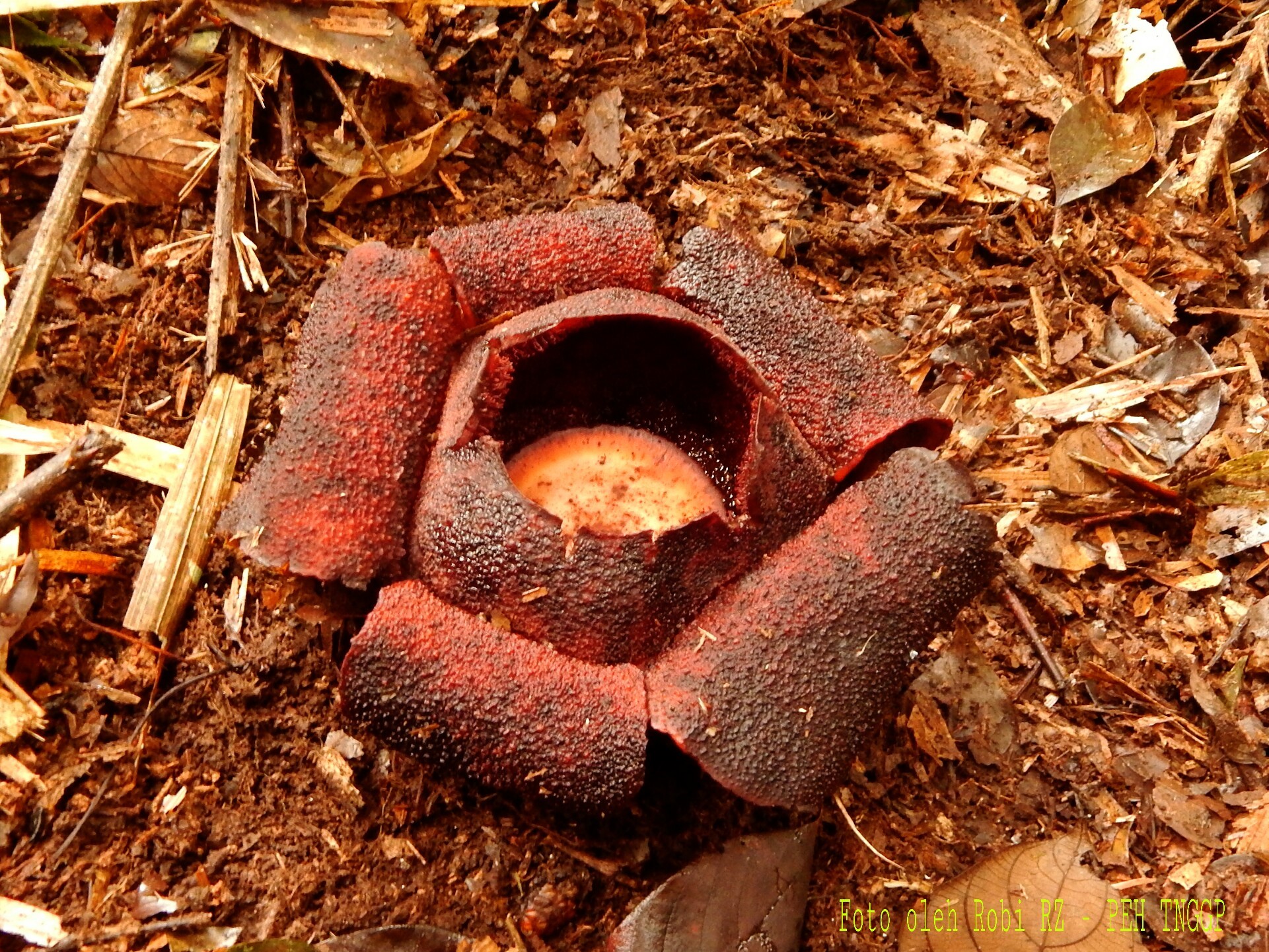 The flowers look and smell like rotting flesh. The foul odour attracts insects such as carrion flies, which transport pollen from male to female flowers. Most species have separate male and female flowers, but a few have hermaphroditic flowers.

Little is known about seed dispersal. Tree shrews and other forest mammals eat the fruits. The extremely tiny seeds have an extremely tiny elaiosomes, and are thus most likely dispersed by ants. The seeds are packed into berries, which contains hundreds of thousands of seeds. 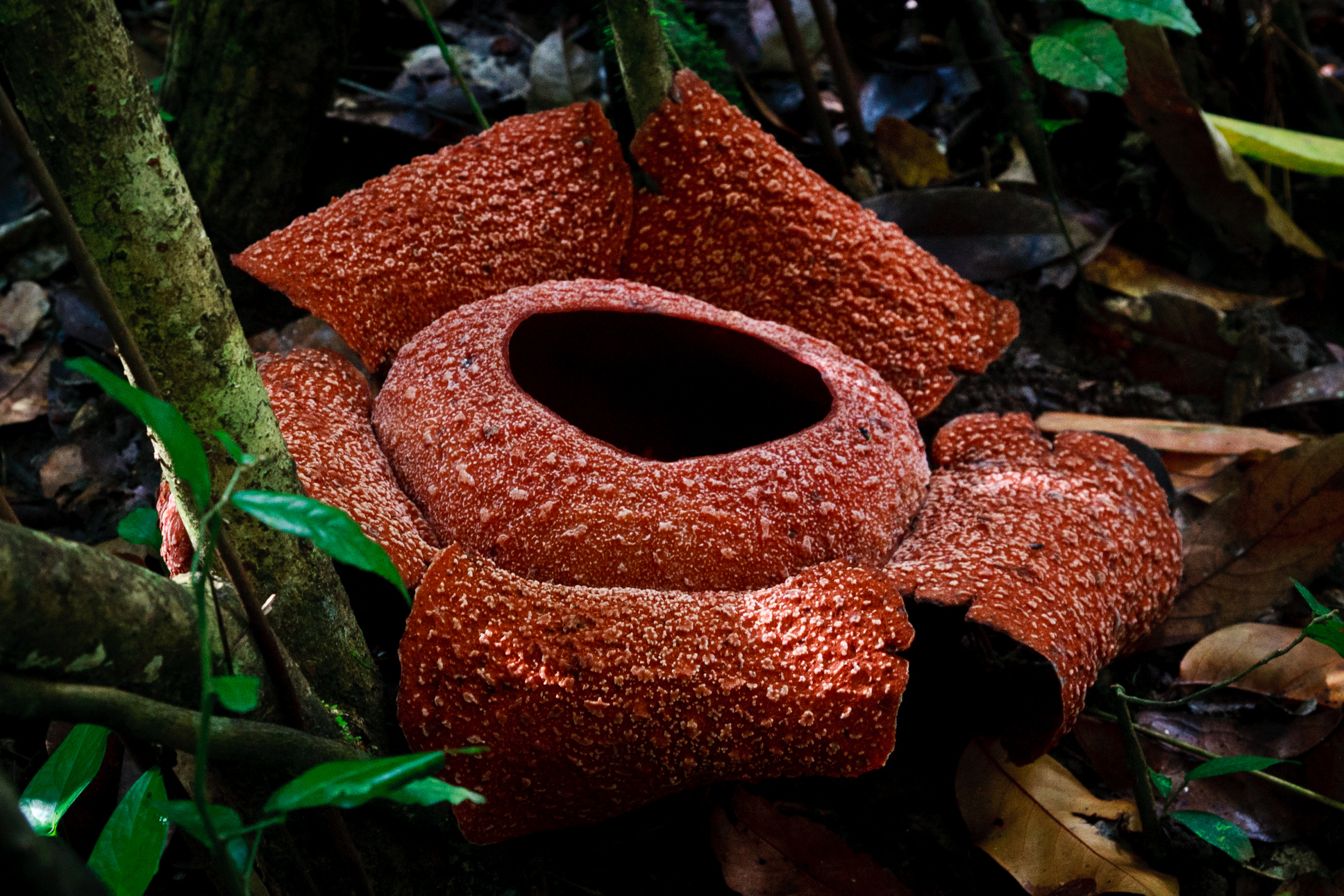 Amorphophallus titanum has the largest unbranched inflorescence, while the talipot palm (Corypha umbraculifera) forms the largest branched inflorescence, containing thousands of flowers; the talipot is monocarpic, meaning the individual plants die after flowering. Rafflesia are also remarkable for showing a large horizontal transfer of genes from their host plants. This is well known among bacteria, but not higher organisms. It also does not really occur in Rafflesia, but in the mitochondria found within the cells of Rafflesia, which were originally derived from bacteria, these appear to have exchanged genes with the mitochondria of the host tissue. 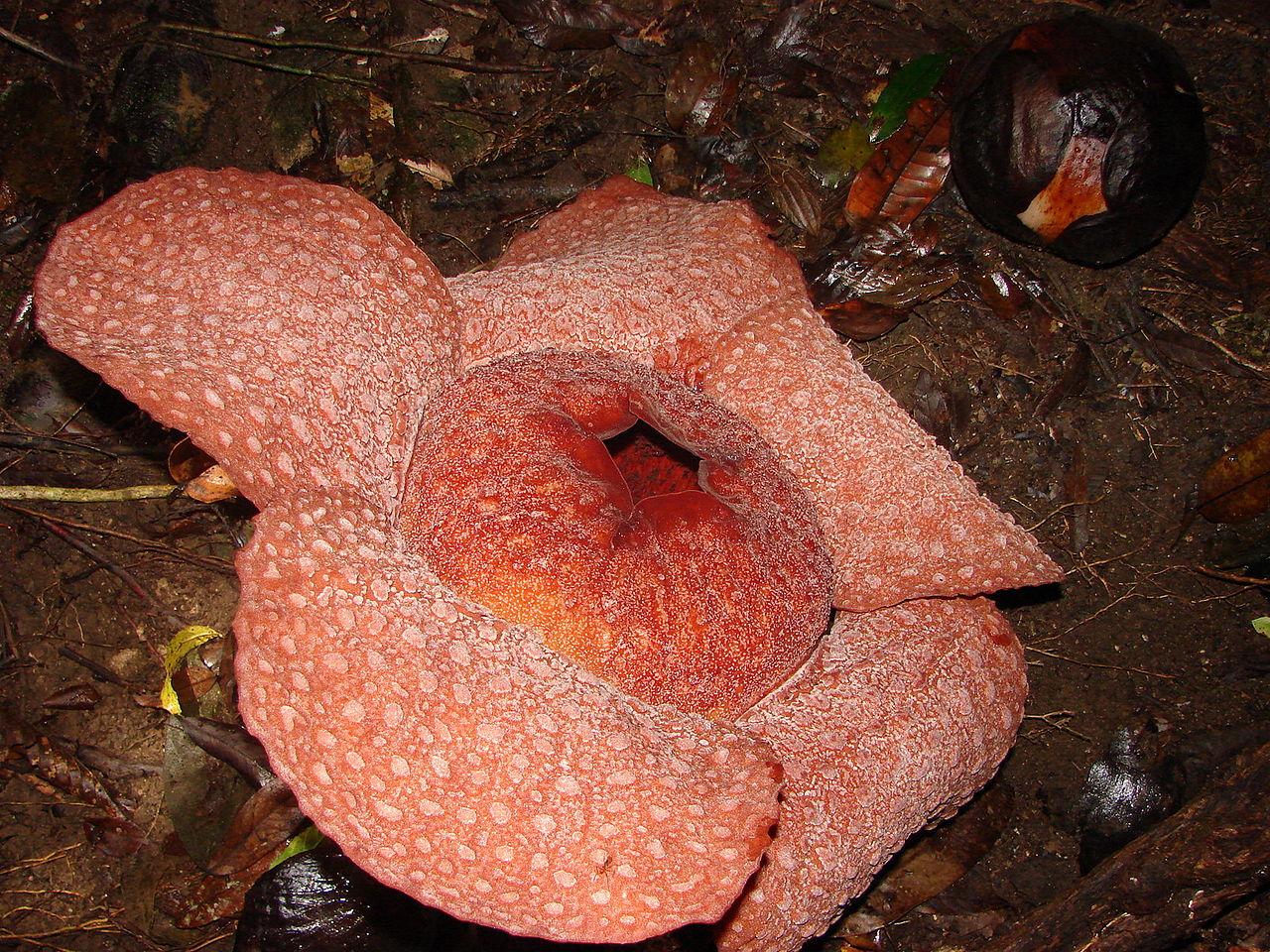 In Indonesian it is known as padma. R. arnoldii is known as padma raksasa (giant Rafflesia). In Javanese it is called patma. In Malay, the ‘normal’ R. hasseltii is vernacularly known as pakma, patma or ambai-ambai, whereas the goliath R. arnoldii from Sumatra is called krubut or kerubut, ‘great flower’. The words padma, pakma or patma originate etymologically from the word पद्म (padma), Sanskrit for ‘lotus’.

A webpage for a class project by two American students, made in 2003, incorrectly stated that the local name translated to “corpse flower”. A month later this sentence was copied to Wikipedia, but due to subsequent edits, by 2010 the sentence came to claim that the English name was “corpse flower”, and by 2020 this name has been used numerous times in news articles and the like.

Until the confusion caused by Wikipedia, the name “corpse flower” referred to the titan arum (Amorphophallus titanum) of the family Araceae. According to a CNN reporter, the flower has been called the “monster flower”. 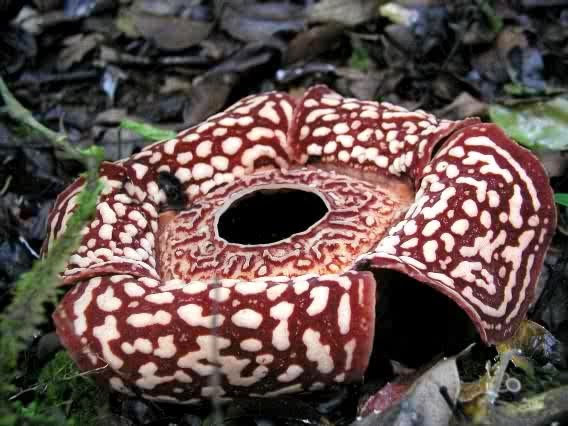 Robert Brown introduced the genus Rafflesia to the wider scientific world in a presentation before the Linnean Society of London in June 1820, but his scientific paper on the subject was only published in late 1821.

In 1999 the British botanical historian David Mabberley pointed out that the genus Rafflesia was first validated by an anonymous report on the meeting published in the Annals of Philosophy in September 1820 (the name was technically an unpublished nomen nudum until this publication). Mabberley claimed the author was Samuel Frederick Gray.

However, as that is nowhere stated in the Annals, per Article 46.8 of the code of ICBN, Mabberley was wrong to formally ascribe the validation to Gray. The validation of the name was thus attributed to one Thomas Thomson, the editor of the Annals in 1820, by the IPNI. Mabberley admitted his error in 2017. This Thomson was not the botanist Thomas Thomson, who was three years old in 1820, but his identically-named father, a chemist, and Rafflesia is thus the only botanical taxon this man ever published 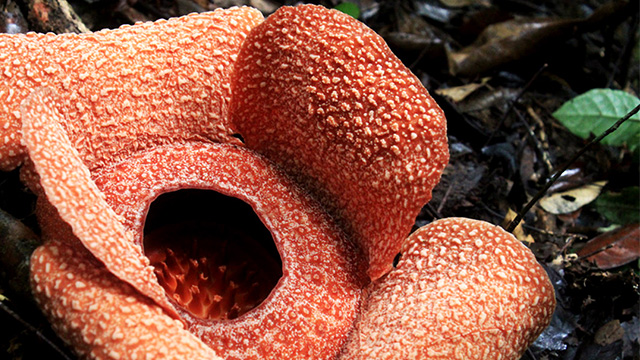 Comparison of mitochondrial DNA (mtDNA) sequences of Rafflesia with other angiosperm mtDNA indicated this parasite evolved from photosynthetic plants of the order Malpighiales. Another 2004 study confirmed this result using both mtDNA and nuclear DNA sequences, and showed the three other groups traditionally classified in Rafflesiaceae were unrelated.

A 2007 study more specifically found Rafflesia and its relatives to be embedded within the family Euphorbiaceae as traditionally circumscribed, which was surprising, as members of that family typically have very small flowers. According to their analysis, the rate of flower size evolution was more or less constant throughout the family except at the origin of Rafflesiaceae, where the flowers rapidly evolved to become much larger before reverting to the slower rate of change.