Central Kalimantan (Indonesian: Kalimantan Tengah), is a province of Indonesia. It is one of five provinces in Kalimantan, the Indonesian part of Borneo. Its provincial capital is Palangkaraya and in 2010 its population was over 2.2 million, while the 2015 showed a rise to 2.49 million and the latest official estimate (for mid 2019) is 2,649,803.

The population growth rate was almost 3.0% per annum between 1990 and 2000, one of the highest provincial growth rates in Indonesia during that time; in the subsequent decade to 2010 the average annual growth rate slowed markedly to around 1.8%, but it rose again in the decade beginning 2010. More than is the case in other province in the region, Central Kalimantan is populated by the Dayaks, the indigenous inhabitants of Borneo.

Since the eighteenth century the central region of Kalimantan and its Dayak inhabitants were ruled by the Muslim Sultanate of Banjar. Following Indonesian independence after World War II, Dayak tribes demanded a province separate from South Kalimantan province.

In 1957 South Kalimantan was divided to provide the Dayak population with greater autonomy from the Muslim population in the province. The change was approved by the Indonesian Government on 23 May 1957 under Presidential Law No. 10 Year 1957, which declared Central Kalimantan the seventeenth province of Indonesia. President Sukarno appointed the Dayak-born national hero Tjilik Riwut as the first Governor and Palangkaraya the provincial capital. 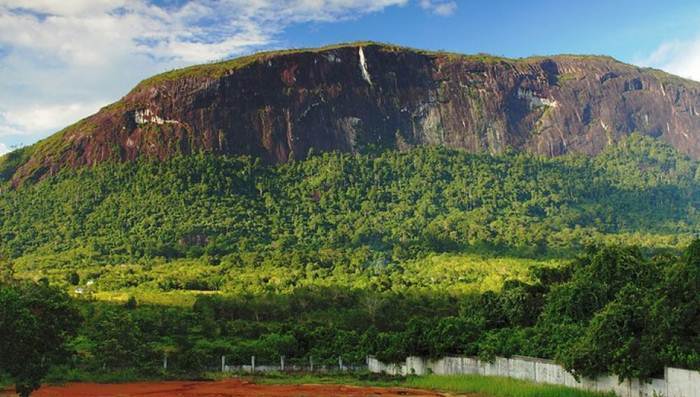 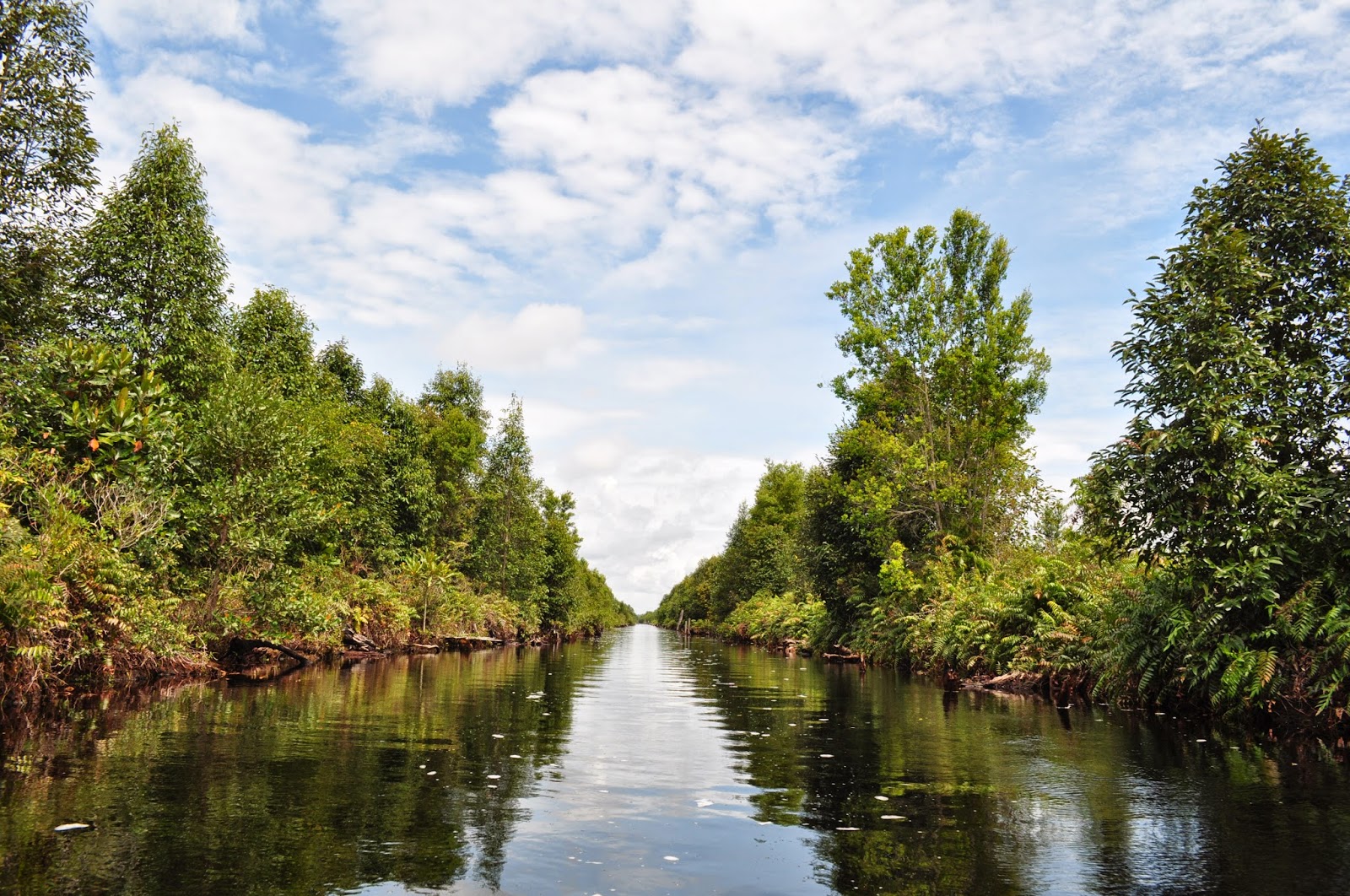 The Schwaner Mountains stretch from the north-east of the province to the south-west, 80% of which is covered in dense forest, peatland swamps, mangroves, rivers, and traditional agriculture land. Highland areas in the north-east are remote and not easily accessible. Non-volcanic mounts are scattered in this area including Kengkabang, Samiajang, Liang Pahang and Ulu Gedang. 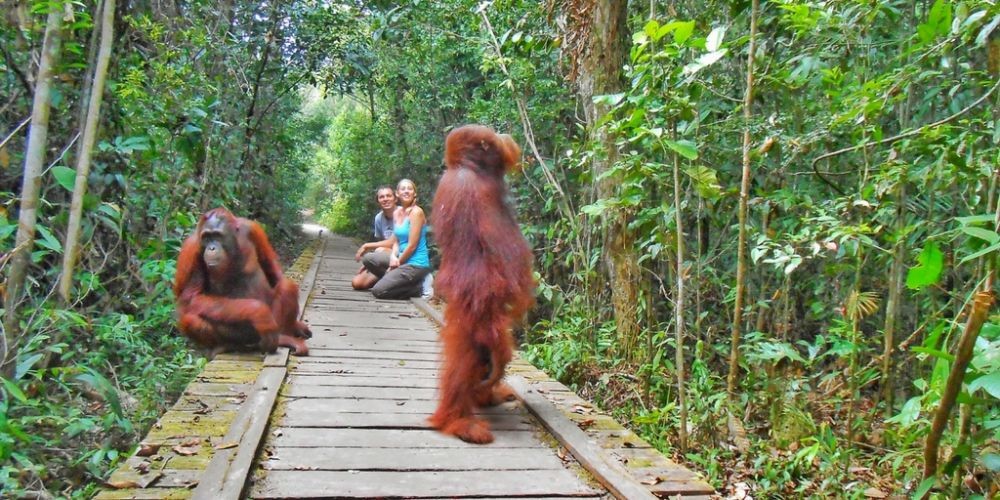 The centre of the province is covered with tropical forest, which produces rattan, resin and valuable timber such as Ulin and Meranti. The southern lowlands are dominated by peatland swamps that intersect with many rivers.

Sabangau National Park is a protected peatland area internationally acknowledged as sanctuary for the endangered Orangutan. Recently the peat swamp forests have been damaged by the Mega Rice Project, which unsuccessfully sought to turn large areas into rice paddies. 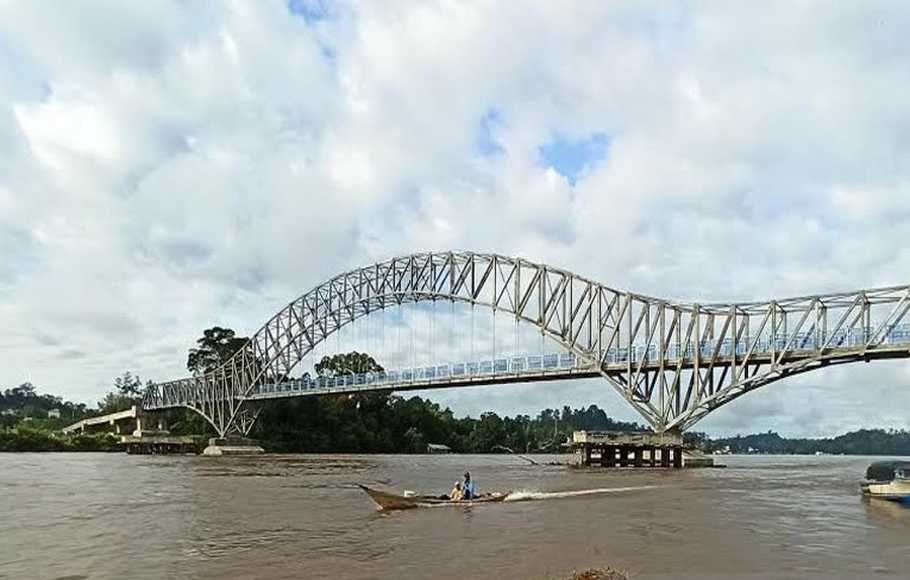 The province’s climate is wet weather equatorial zone with an eight-month rainy season, and 4 months of dry season. Rainfall or precipitation is 2,776 – 3,393 mm per year with an average of 145 rainy days annually.

Rivers are an important mode of transportation and a primary location for settlement. With relatively undeveloped infrastructure, the province’s economy relies heavily on the rivers. 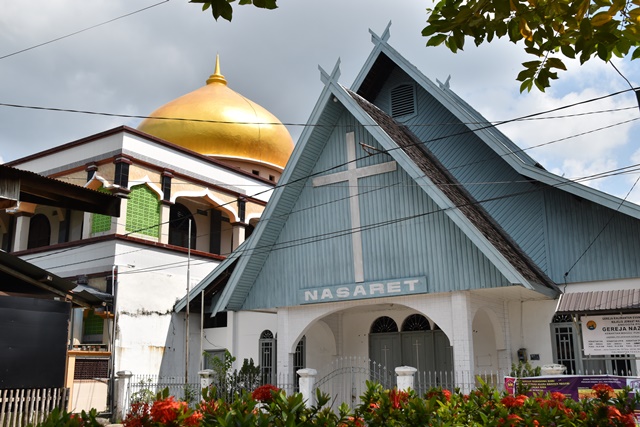 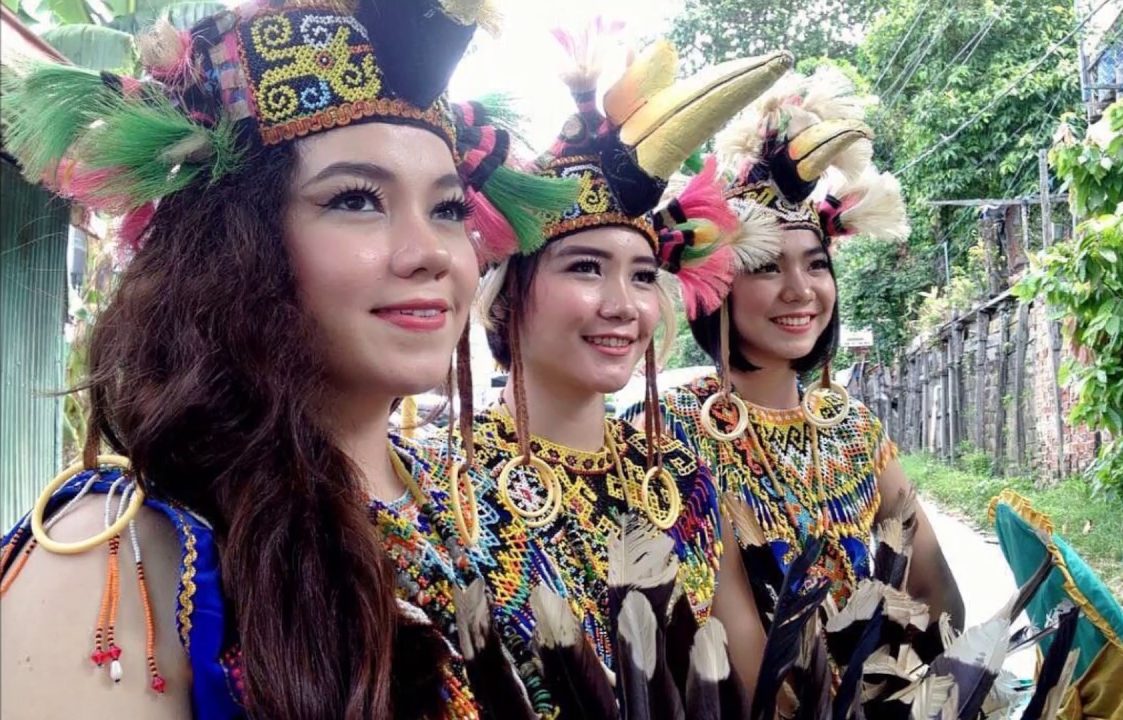 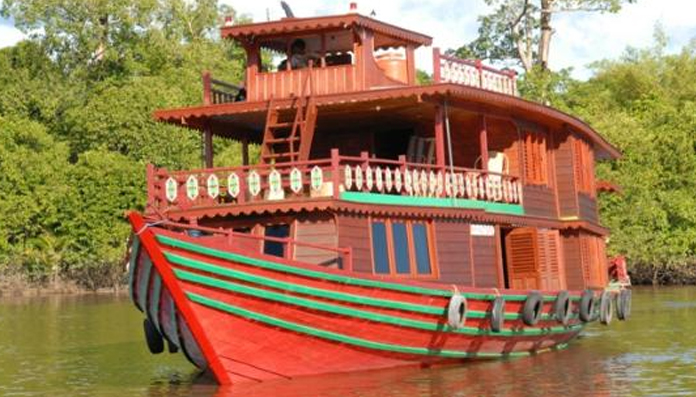 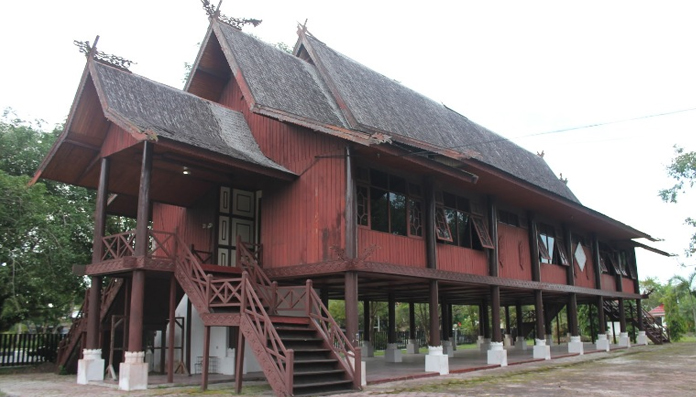 The dominant Dayak language used by the Dayak tribe in Central Kalimantan, including the Ngaju language which is used in the Kahayan and Kapuas river areas. The Bakumpai and Maanyan languages are spoken by residents along the Barito river basin and its surroundings and the Ot Danum languages used by the Dayak Ot Danum tribe in the upper reaches of the Kahayan and Kapuas rivers. 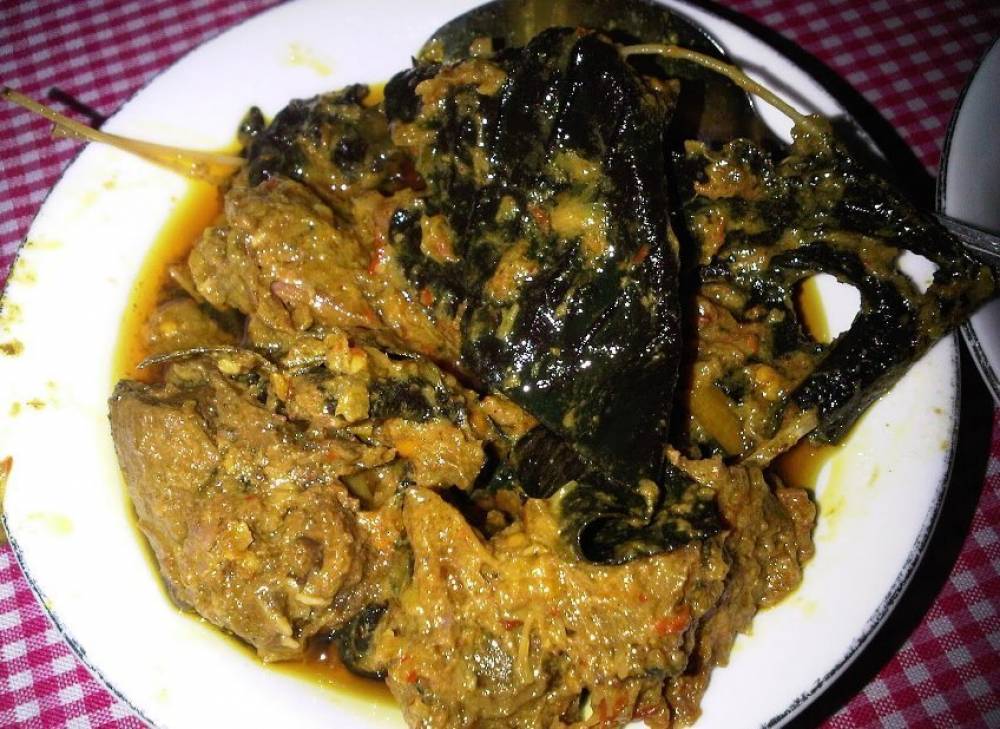 Bangamat is a dish made from large bats. The cooking method is that the paing to be cooked is cleaned by removing the nails, bending the rough hairs and the back, as well as the intestines, then the wings, feathers and meat are cooked. Usually for the Ngaju Dayak people, it is cooked with more spices, for the Maanyan Dayak, the most is cooked with spices. namely lemongrass and pikauk leaves. Usually Paing is cooked with chopped banana stem liver vegetables, the bananas used are fan bananas. Or it can also be cooked with taro tendrils.

The name Bangamat is taken from the Ngaju Dayak language, or it can also be called Paing. Taken from the Dayak Maanyan language, which is a traditional Dayak cuisine made from the main ingredients of large bats or bats. The bats used are fruit-eating bats. The largest body size of other types of bats. Not all types of bats are made for this dish, only the largest fruit-eating bat species are used. Insect-eating and blood-sucking bats are not used and are not consumed to make this food. Although it is best known and consumed in several areas, the Dayak people have a special characteristic in making it. 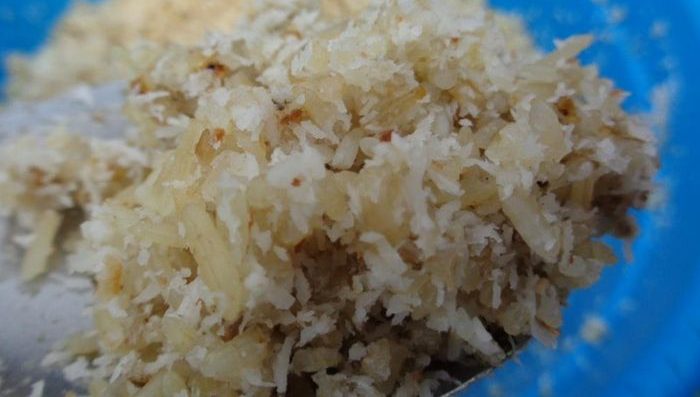 Kenta is made from glutinous rice. Freshly harvested glutinous rice is roasted, then ground using a mortar. The glutinous rice grains are ground until they are flat. After that, the Kenta is mixed with coconut water. Kenta served with a mixture of grated coconut. There are also those who add sugar, depending on taste.

Kenta tastes savory mixed with sweet, depending on the mixture. The sticky rice taste is legit, feels a bit chewy but not as sticky as cooked glutinous rice. This food is eaten as a snack in the afternoon or evening. There are various ways of presenting it. Some are served like self-picked rice. There is also served in the form of a fist like buns. 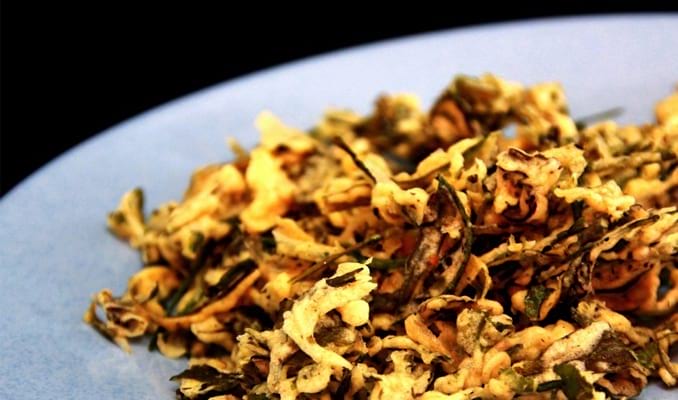 The ancestors of the Dayak people who lived in Central Kalimantan in ancient times lived in harmony with nature. Forests have become a source of livelihood for them so that not infrequently the flora contained in the forest is used for their stomach needs. The Kalakai plant is one of the plants that has been naturally used by the Dayak community in Central Kalimantan.

The plant is believed to be able to treat diarrhea, increase blood flow, and maintain youthful skin. Kelakai is usually processed into a kind of culinary snack, such as chips.

Kalakai chip is a typical food of Central Kalimantan made by the Dayak tribe by utilizing the young leaves. The mantle leaves are then coated with seasoned flour mixture and fried in hot oil. Chips that have been finished have a savory taste and the texture is very crunchy in the mouth. 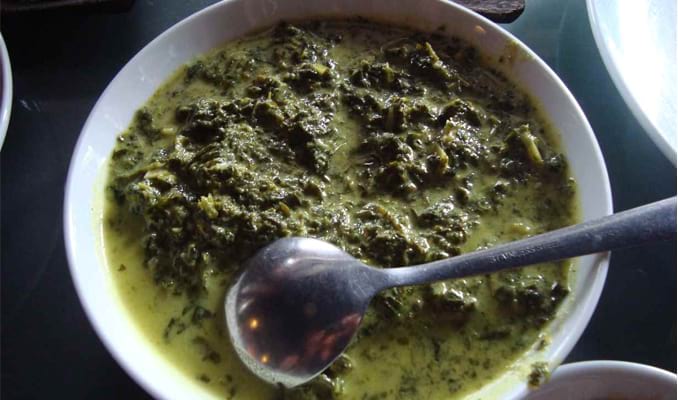 Kalumpe or karuang also contains a thick gravy made from a mixture of spices such as garlic, shallots, lemongrass, galangal, cinnamon, and chilies. To add flavor, this dish is given a complement in the form of small eggplant or eggplant sparrow. After the kalumpe is finished, it is usually not served immediately, but is given a sprinkling of peanuts and anchovies first. Kalumpe by the people of Central Kalimantan is eaten with warm rice and chili paste. 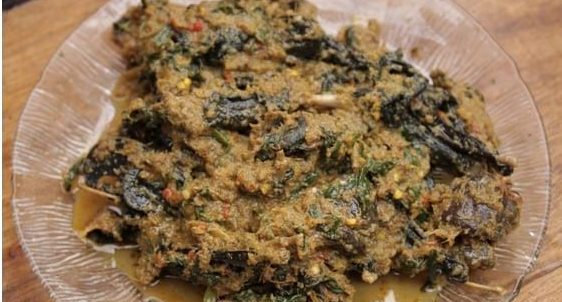 Terong Mapui, Mapui eggplant.. Of course this one food sounds very foreign to those who have never set foot in Kalimantan. Mapui eggplant is a food made from a fairly large purple eggplant. 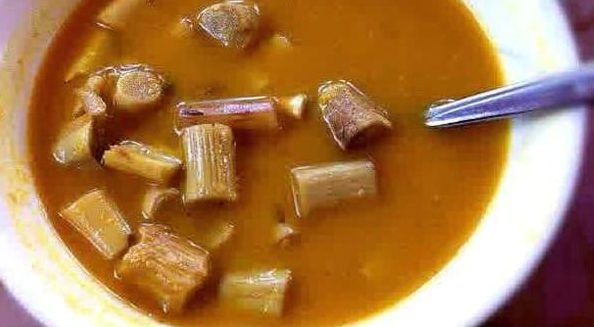 Juhu kujang is a typical dish from Central Kalimantan made from taro. Taro is a herbaceous plant with broad leaves and bulbs that live a lot in the wild. The taro plant has long been used by the community for herbal medicines as well as ingredients to make certain dishes, such as juhu cleaver.

Juhu kujang or taro curry uses taro plants that have been previously processed. The purpose of the processing is to get rid of the itching that can arise when cooked and served. In addition to taro, juhu kujang also contains additional ingredients such as fish that has been mixed with spices, coconut milk, and young jackfruit leaves that are cut into small pieces.