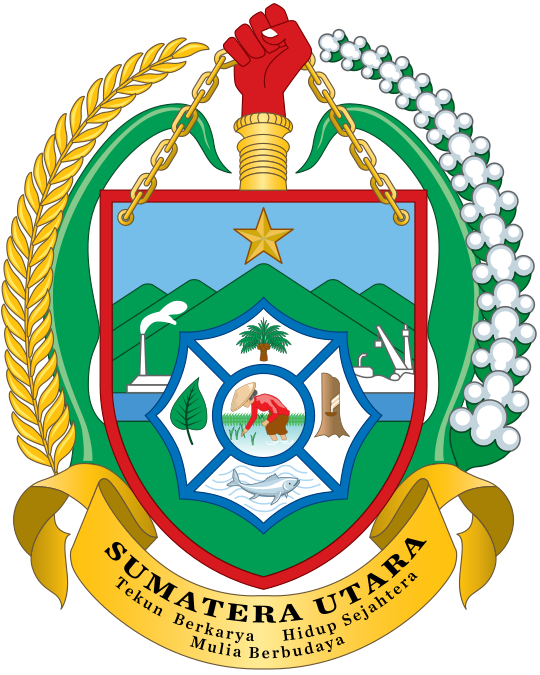 North Sumatra (Indonesian: Sumatra Utara) is a province of Indonesia located on the northern part of the island of Sumatra. Its capital and largest city is Medan. North Sumatra is the fourth most-populous province after West Java, East Java and Central Java. The province covers an area of 72,981 km2. According to the 2020 population census, the province had a population of 14,799,361.

The last seafarers that made it to Sumatra were the Dutch. A government of North Sumatra named Gouvernement van Sumatra with the area covering the whole of the island of Sumatra, was headed by a governor who was based in the city of Medan.

After independence, the first session of the National Committee of Regions (KND), Sumatra was then divided into three sub-provinces namely North Sumatra, Central Sumatra and South Sumatra. North Sumatra province itself was an amalgamation of three administrative regions called Residencies namely: the Residency of Aceh, the East Sumatra Residency, and the Residency of Tapanuli.

In early 1949, the reorganization of government took place in Sumatra, with the decision of the Government Emergency R.I. No. 22 / Govt / Emergency Government on May 17, 1949, which abolished the post of Governor of North Sumatra. Furthermore, the Government Emergency Decree R.I. on December 17, 1949, established the Province of Aceh and Tapanuli Province / East Sumatra. Then, with a Government Regulation in lieu of Law No. 5 Year 1950 on August 14, 1950, such provisions were lifted and reshaped North Sumatra Province.

Act R.I. No. 24 of 1956, promulgated on December 7, 1956, established an autonomous Aceh Province, independent of the Province of North Sumatra.

The province of North Sumatra stretches across the island of Sumatra between the Indian Ocean and the Strait of Malacca. It borders Aceh province on the northwest and Riau and West Sumatra provinces in the southeast. It has an area of 72,981 km2. The province contains a broad, low plain along the Strait of Malacca on which the provincial capital, Medan, is located. In the south and west, the land rises to the mountain range that runs the length of Sumatra; the mountains here are dominated by Lake Toba, formed from the caldera of an ancient volcano. Several large islands in the Indian Ocean off the west coast of Sumatra are currently part of North Sumatra, most notably Nias Island and the Batu Islands. 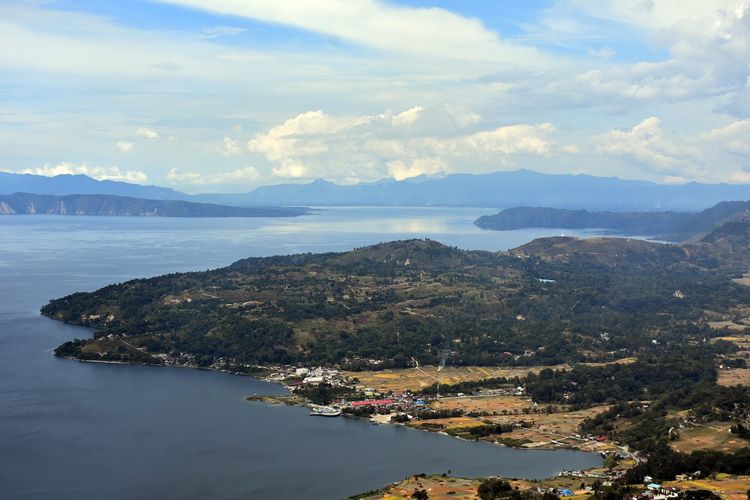 There are 419 islands in North Sumatra province. The outer islands include the island of Simuk (Nias), and the island of Berhala in the Strait of Sumatra (Malacca). The Nias archipelago consists of the main island of that name and other smaller islands in the vicinity, located off the coast of western Sumatra in the Indian Ocean. The administration center is located in Gunung Sitoli. 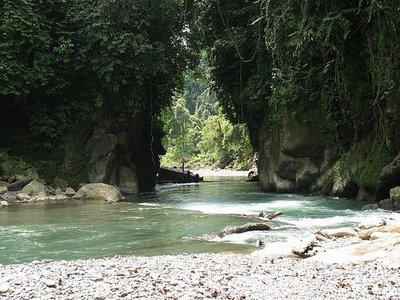 But this figure character is de jure alone. Because as a de facto , the existing forests is not covering it anymore. Happens a lot of damage due to encroachment and illegal logging. So far, over 206,000 ha of forest in Sumatra has experienced changes in function. Has been turned into plantations, transmigration. And of the total, as many as 163,000 ha of plantations and 42,900 ha for transmigration area. 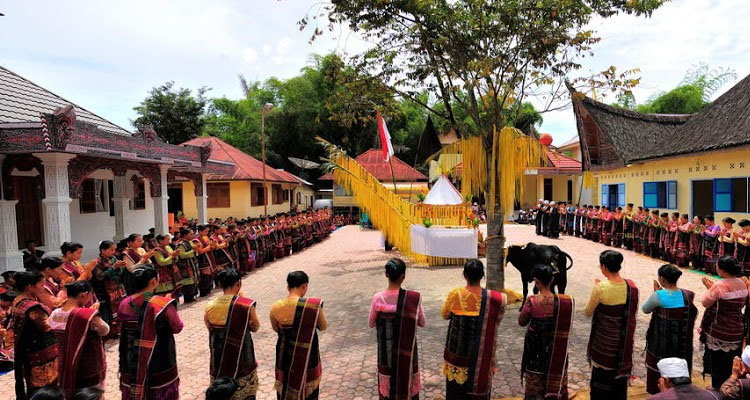 North Sumatra is a multi-ethnic province. The Malay people are regarded as the native people of this province. The Javanese reside around Deli Serdang Regency, including Medan, while the west coast of the province is mainly inhabited by Pakpak, Mandailing and Minangkabau people. The central region around Lake Toba, is predominantly inhabited by Bataks. 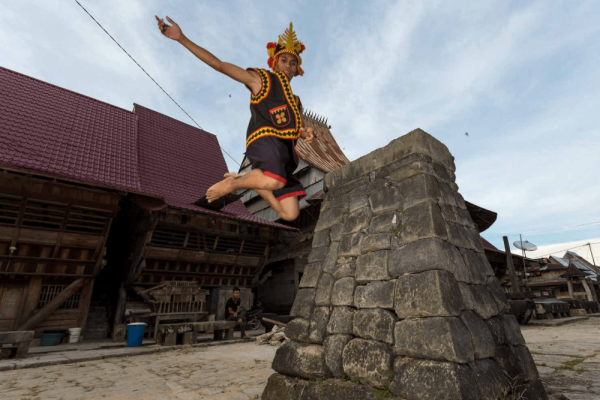 The Nias people reside mostly in Nias Island and the surrounding islands. With the opening of tobacco plantations in East Sumatra during the Dutch East Indies era, the colonial government employed many contract labourers for plantations. The newcomers were Chinese refugees, who were welcomed in Sumatra. 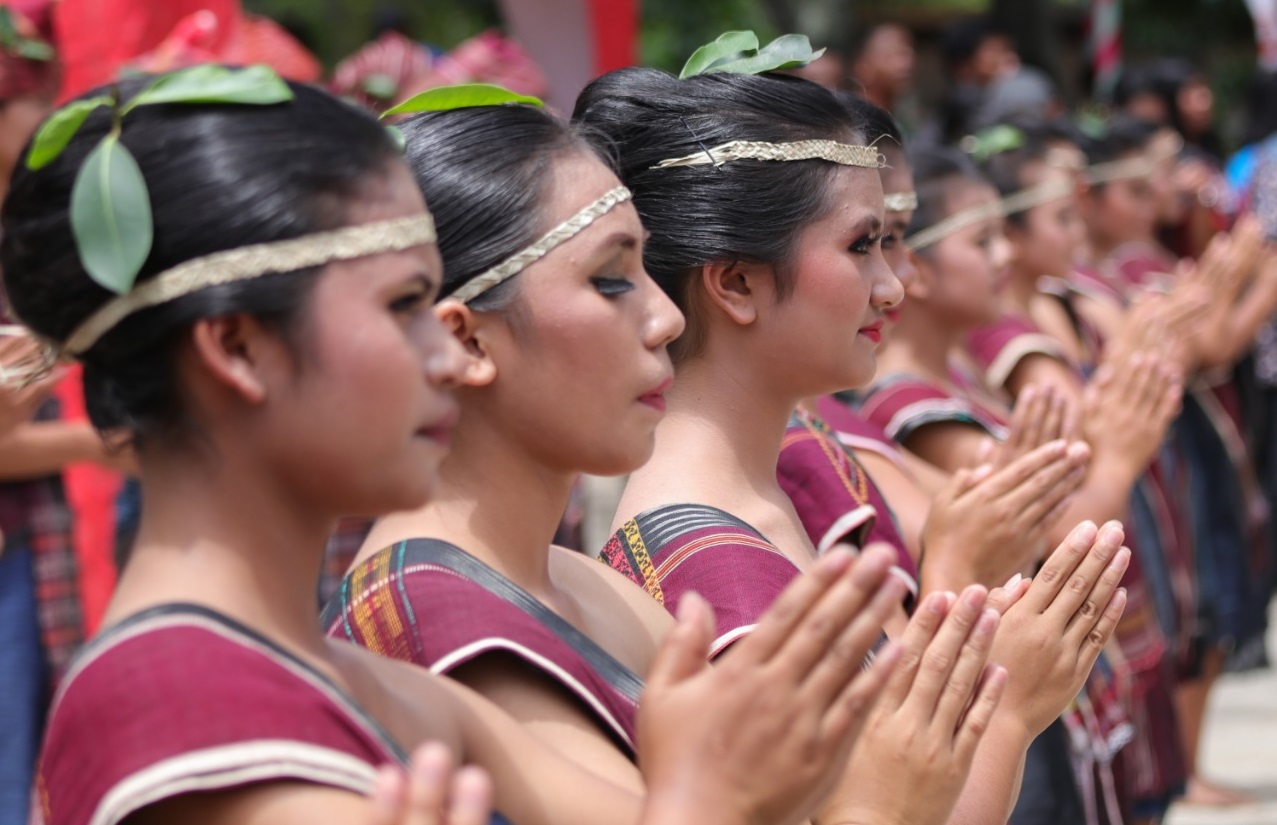 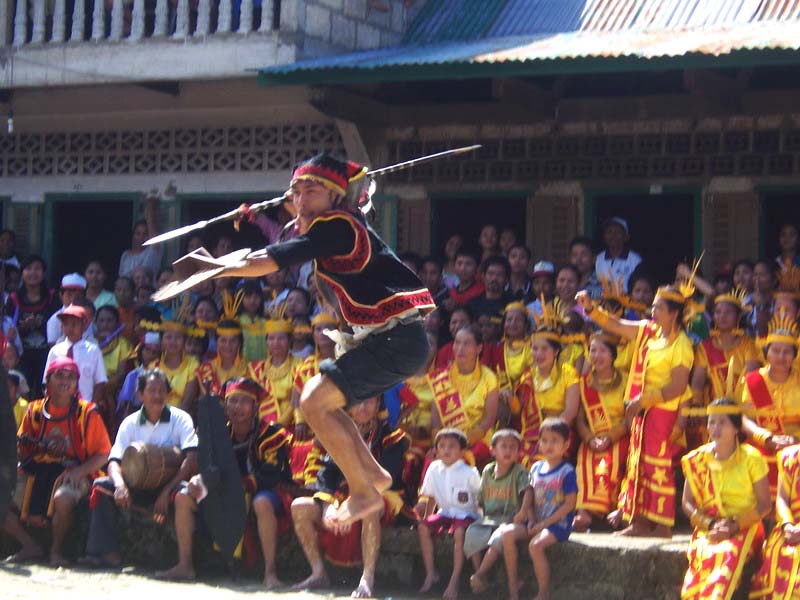 Mostly ethnic Chinese in North Sumatra are fluent in Hokkien with Zhangzhou dialect mixed with Malay/Bataknese/Indonesian words, while for Chinese around Labuhan Batu area using Quanzhou dialect that has similarity with Bagansiapiapi Hokkien. The small Teochew and Hainanese speakers are also exist. The ethnic Indian people in Medan speak Tamil with a some Punjabi speakers among Punjabis. The Acehnese people speak Aceh and Gayo language. 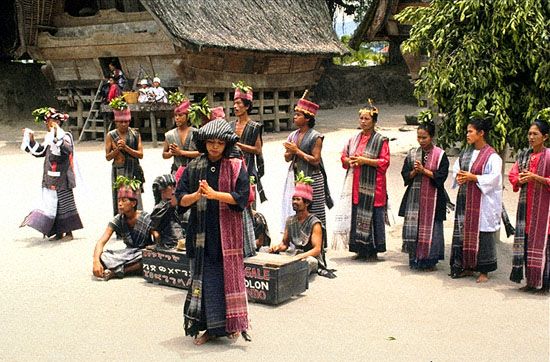 More than 95 percent out of all residents are either Muslim or Christian; the remainder are Buddhist, Hindus, or follow folk religions such as Confucian, Parmalim, and Taoist. These are the recognized religions of North Sumatra: 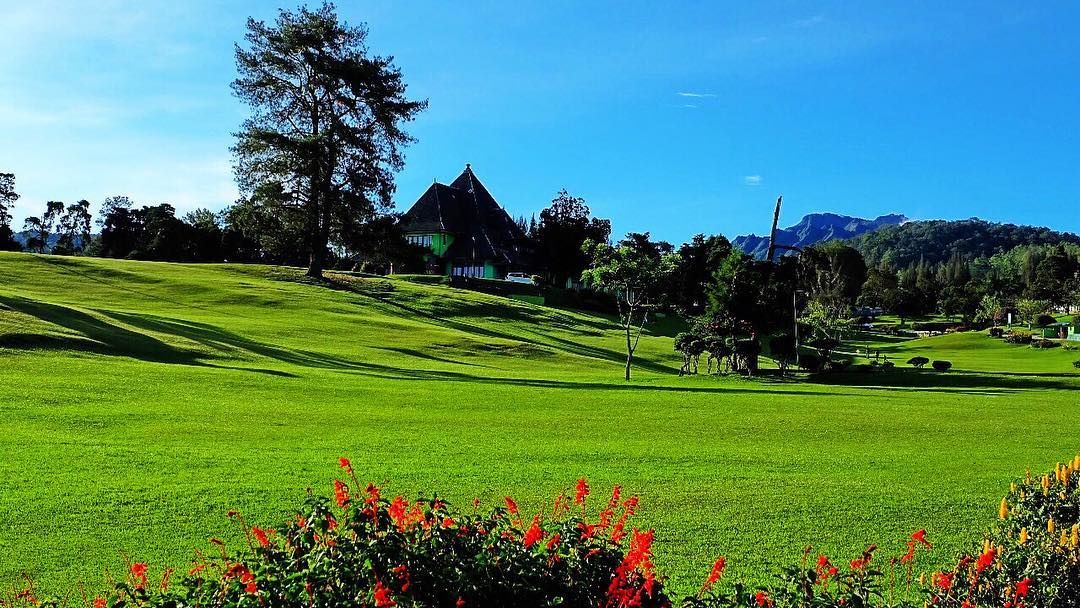 North Sumatra has lots of travel destinations. According to Ministry of Tourism, North Sumatra is ranked on the top 10 most visited province in Indonesia. There are various kinds of tourist destinations that could be found throughout the province, Berastagi is best known as a hilly place with a cooler temperature as the whole province is in tropical region. 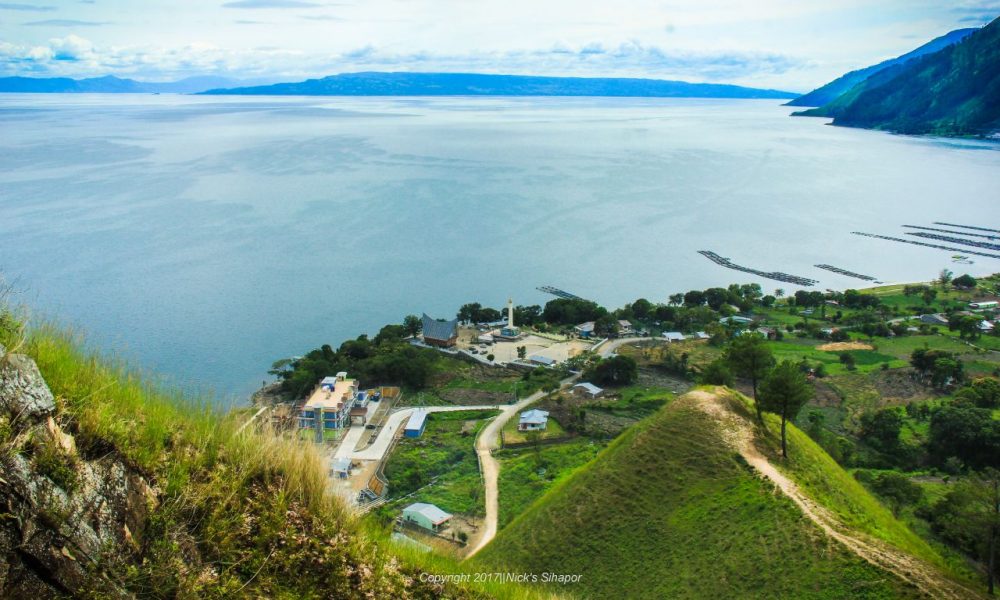 Lake Toba is also a popular travel destination. Toba is a large volcanic lake which has an island inside of it, Samosir Island. Nias Island and other several islands nearby named Batu Islands is a popular spot for surfing. The capital itself, Medan, has many places of interest, mainly for its historical sites. The city is also known for its variety of cuisine.

The Next list is the most known places of interest in North Sumatra: 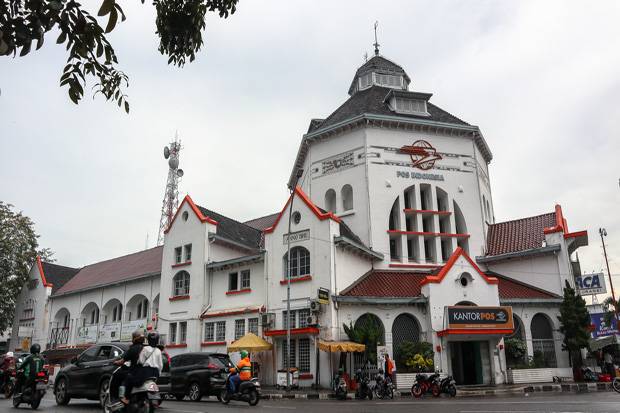 Medan is the capital of North Sumatra province with a diverse crowd population of tribes and religions in unity. There are many historical tourist objects to spot and various great cuisine to taste in Medan.

Lake Toba is the largest volcanic lake in the world. Located in the centre of North Sumatra, the lake can be reached via Parapat (Simalungun regency), Tongging (Karo regency), and Balige (Toba Samosir regency). 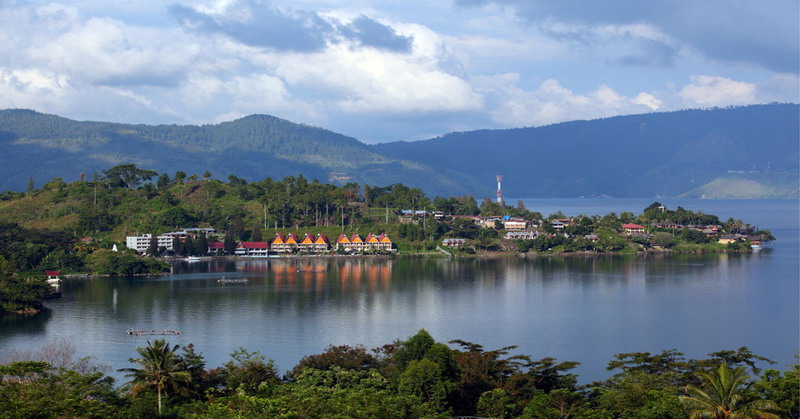 Samosir Island is a volcanic island in middle of Lake Toba, It is a popular tourist destination due to its exotic Batak history and the vistas it offers. The tourist resorts are concentrated in the Tuktuk, Tomok, Simanindo, and Pangururan areas.

Bukit Lawang known for the largest animal sanctuary of Sumatran orangutan (around 5,000 orangutans occupy the area), and also the main access point to the Gunung Leuser National Park from the east side. 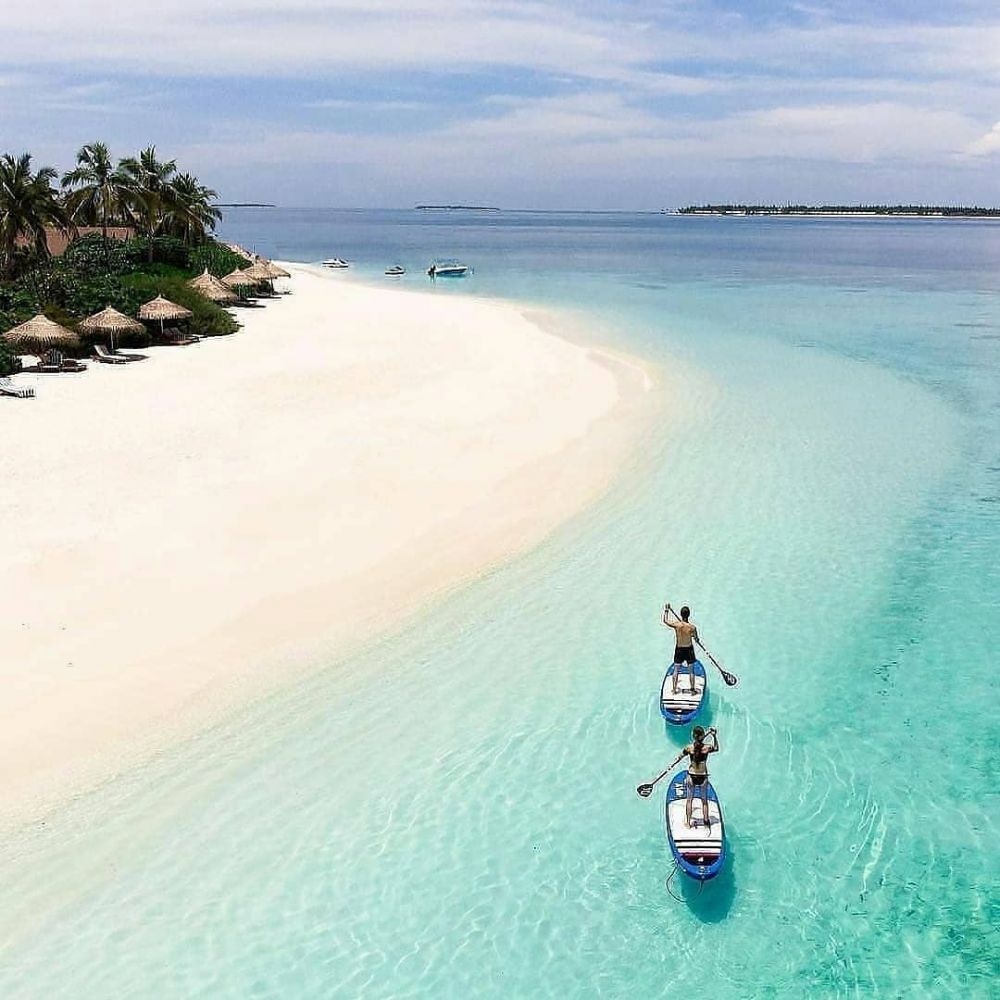 Nias Island is an island off the western coast of Sumatra. Nias is an internationally popular surfing destination where many international surfing competitions are held. The best known surfing area is Sorake Bay, close to the town of Teluk Dalam, on the southern tip. This is enclosed by the beaches of Lagundri and Sorake. Tourists can visit the island by plane from Medan, or by ferry from Sibolga. 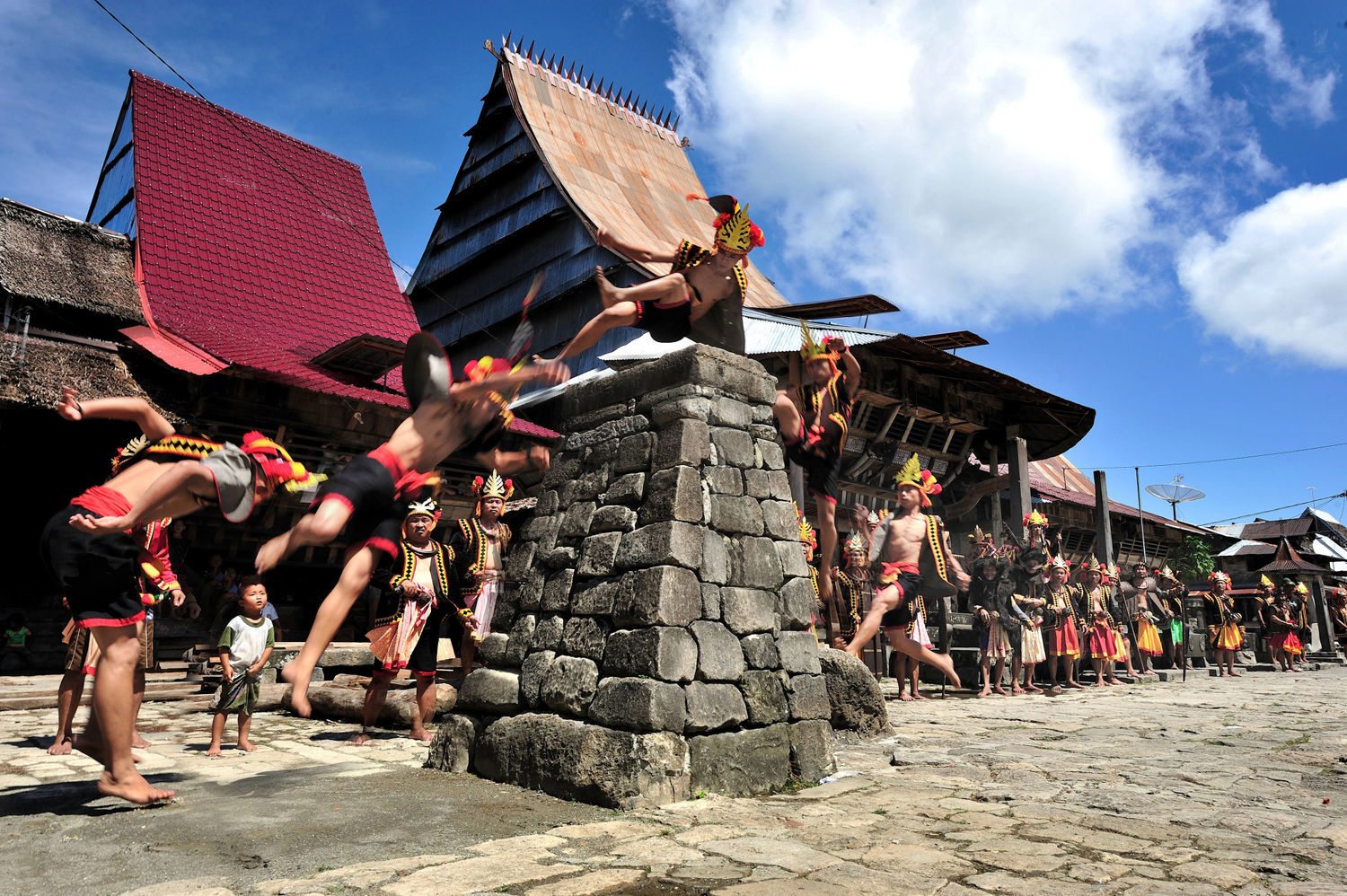 Bawomataluo village is a settlement in Teluk Dalam of the South Nias Regency of Indonesia. The village was built on a flat-topped hill, the name Bawomataluo meaning “Sun Hill”, and is one of the best-preserved villages built in traditional style.

Berastagi is a small highland town located 63 kilometres to the south of Medan, and is a popular weekend destination for city dwellers due to its chilled and fresh mountain air.

Dolok Tinggi Raja has a unique soil colour is white because it is located in a limestone hill that resembles snow, and also in the middle of this area there are lakes with hot blue-green coloured water, located in Tinggi Raja, Simalungun.

Lumbini Natural Park is a Buddhist Theravada-style temple that is similar to Shwedagon Pagoda in Myanmar located in Berastagi.

Dua Warna Waterfall is a two-coloured waterfall located in Sibolangit, around 30 km from Medan city. 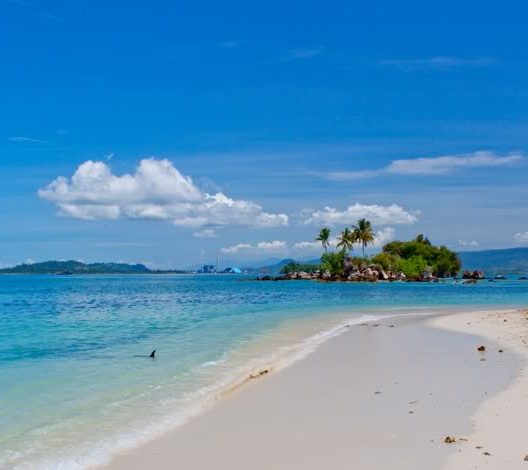 Poncan Island is a resort including a beach, located on west offshore of Sibolga city.

Berhala Island is a 2.5 hectares island located in the Malaka Strait near the boundary of Indonesia and Malaysia. It is a popular place for snorkeling and watching turtle nesting. Visitors can reach the island via boat from Sergei in the Serdang Bedagai regency.

Sipisopiso, one of the highest waterfalls in Indonesia, is located near Tongging in Karo regency, about 1 hour drive from Berastagi. 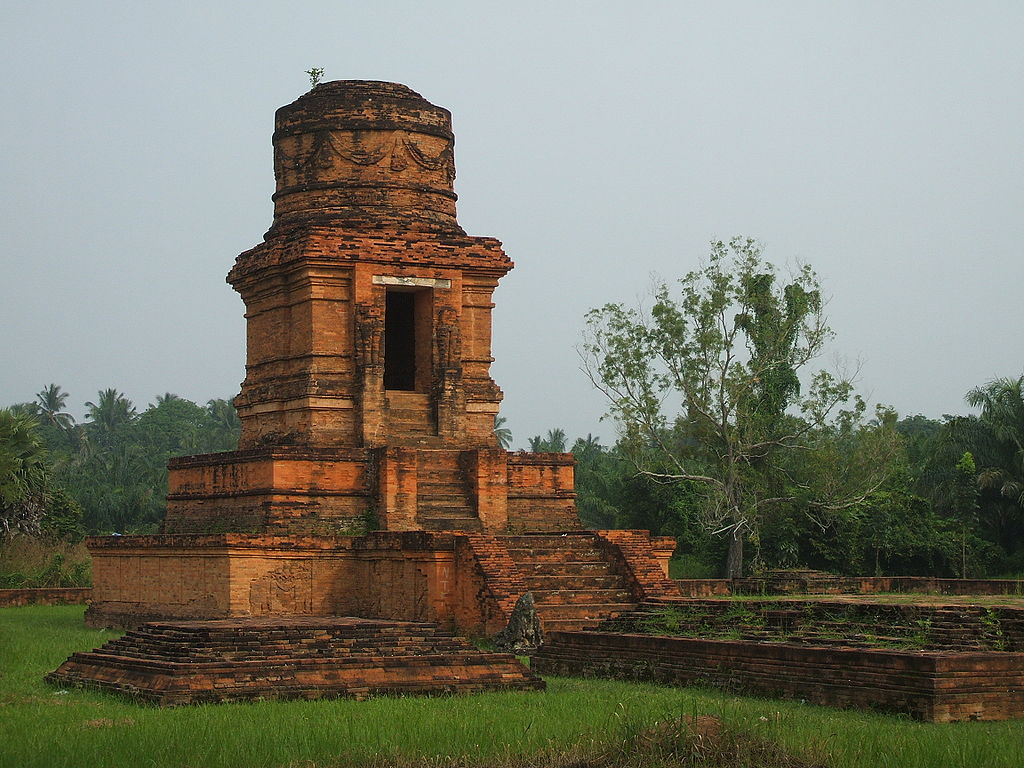 Bahal temple, an ancient Buddhist monastery located in Padang Bolak, Padang Lawas Regency, around 3 hours journey with car from Padangsidempuan. The temple is believed to be constructed between the 11th to 13th century AD.

Sigura-Gura Waterfall located in Porsea, Toba Samosir Regency, this is a waterfall that has a height that reaches 250 metres.

Tangkahan is a tourist site situated at the edge of the Gunung Leuser national park, around 20 km due north from Bukit Lawang, The main tourist draw at Tangkahan is the presence of Sumatran elephant.

Lingga is one of the village in the Karo Regency. Located at an altitude of about 1200 m above sea level, approximately 15 km from Brastagi and 5 km from the Kabanjahe. Linga is unique Karo traditional house and village that has been built an estimated of 250 years ago, but still sturdy. 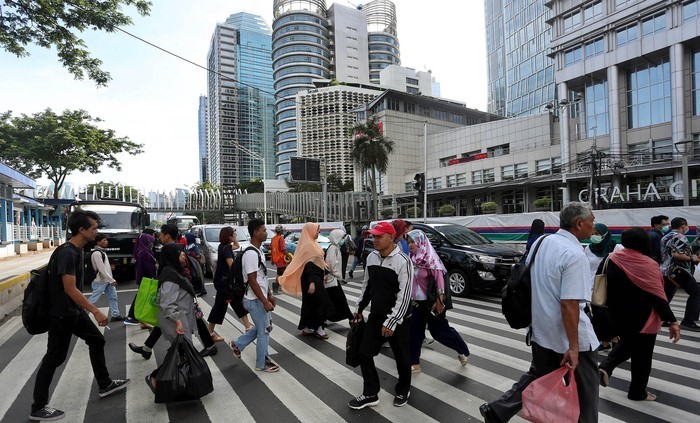 Jakarta attracts people from across Indonesia, often in search of employment. The 1961 census showed that 51% of the city’s population was born in Jakarta. Inward immigration tended to negate the effect of family planning programs. 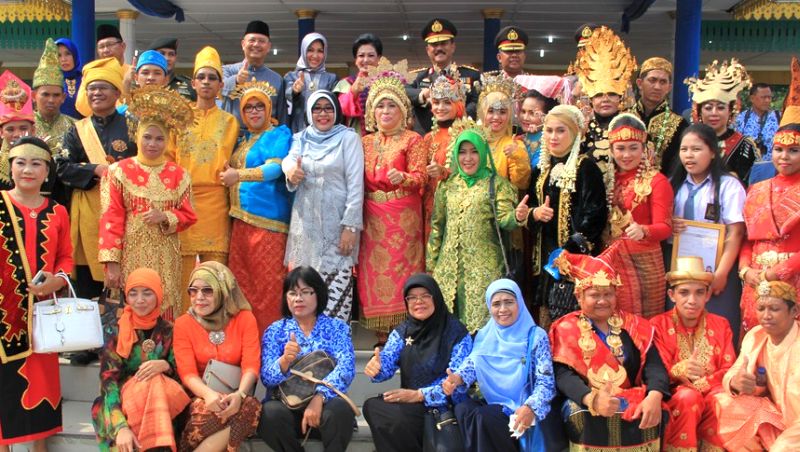 The ‘Betawi’ (Orang Betawi, or ‘people of Batavia’) are the descendants of the people living in and around Batavia who became recognised as an ethnic group around the 18th–19th century. They mostly descend from Southeast Asian ethnic groups brought or attracted to Batavia to meet labour needs.

Betawi people are a creole ethnic group who came from various parts of Indonesia and intermarried with Chinese, Arabs and Europeans. Betawi form a minority in the city; most lived in the fringe areas of Jakarta with hardly any Betawi-dominated regions of central Jakarta. The Chinese in Jakarta praying during Chinese New Year in Glodok, Jakarta 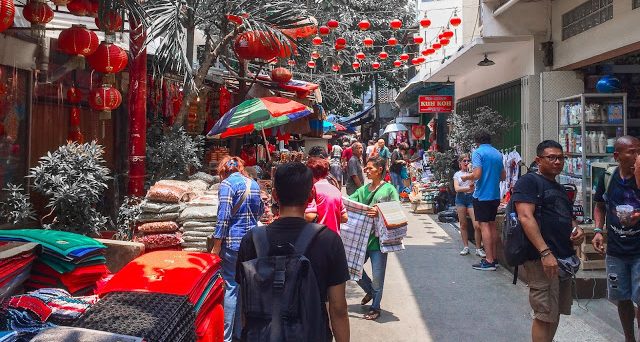 A significant Chinese community has lived in Jakarta for many centuries. They traditionally reside around old urban areas, such as Pinangsia, Pluit and Glodok (Jakarta Chinatown) areas. They also can be found in the old Chinatowns of Senen and Jatinegara. Officially, they make up 5.53% of the Jakarta population, although this number may be under-reported.

Toba Batak is the largest sub-ethnic Batak group in Jakarta. Minangkabau people generally work as merchants, peddlers, and artisans, with more in white-collar professions, such as doctors, teachers and journalists.

Indonesian is the official and dominant language of Jakarta, while many elderly people speak Dutch or Chinese, depending on their upbringing. English is also widely used for communication, especially in Central and South Jakarta. Each of the ethnic groups uses their mother language at home, such as Betawi, Javanese, and Sundanese.

The Betawi language is distinct from those of the Sundanese or Javanese, forming itself as a language island in the surrounding area. It is mostly based on the East Malay dialect and enriched by loan words from Dutch, Portuguese, Sundanese, Javanese, Minangkabau, Chinese, and Arabic. 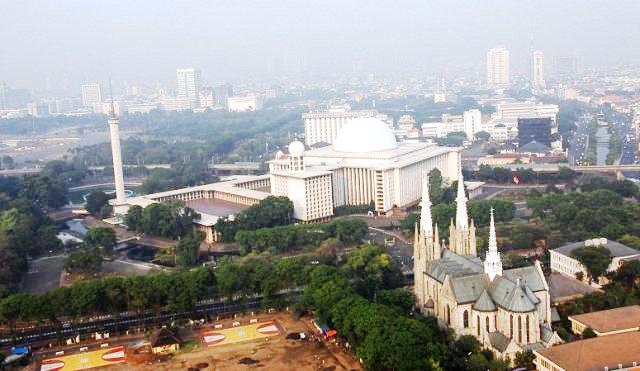 The Roman Catholic community has a Metropolis, the Archdiocese of Jakarta that includes West Java as part of the ecclesiastical province. There is also a Baháʼí Faith community.

North Sumatra consists of 8 Kotamadya (Municipalities), and 28 Kabupaten (Regency), 440 Kecamatan (Districts) Each city and regency is divided into districts/Kecamatan.