The Komodo Dragon (Varanus komodoensis), also known as the Komodo Monitor, is a species of lizard found in the Indonesian islands of Komodo, Rinca, Flores, and Gili Motang. A member of the monitor lizard family Varanidae, it is the largest extant species of lizard, growing to a maximum length of 3 metres (10 ft) in rare cases and weighing up to approximately 70 kilograms (150 lb).
more..

As a result of their size, these lizards dominate the ecosystems in which they live. Komodo dragons hunt and ambush prey including invertebrates, birds, and mammals. It has been claimed that they have a venomous bite; there are two glands in the lower jaw which secrete several toxic proteins. The biological significance of these proteins is disputed, but the glands have been shown to secrete an anticoagulant. Komodo dragons’ group behavior in hunting is exceptional in the reptile world. The diet of big Komodo dragons mainly consists of Timor deer, though they also eat considerable amounts of carrion. Komodo dragons also occasionally attack humans.

Mating begins between May and August, and the eggs are laid in September; as many as 20 eggs are deposited at a time in an abandoned megapode nest or in a self-dug nesting hole. The eggs are incubated for seven to eight months, hatching in April, when insects are most plentiful. Young Komodo dragons are vulnerable and therefore dwell in trees, safe from predators, and cannibalistic adults. They take 8 to 9 years to mature and are estimated to live up to 30 years.

Komodo dragons were first recorded by Western scientists in 1910. Their large size and fearsome reputation make them popular zoo exhibits. In the wild, their range has contracted due to human activities, and they are listed as vulnerable by the IUCN. They are protected under Indonesian Law, and Komodo National Park was founded in 1980 to aid protection efforts. 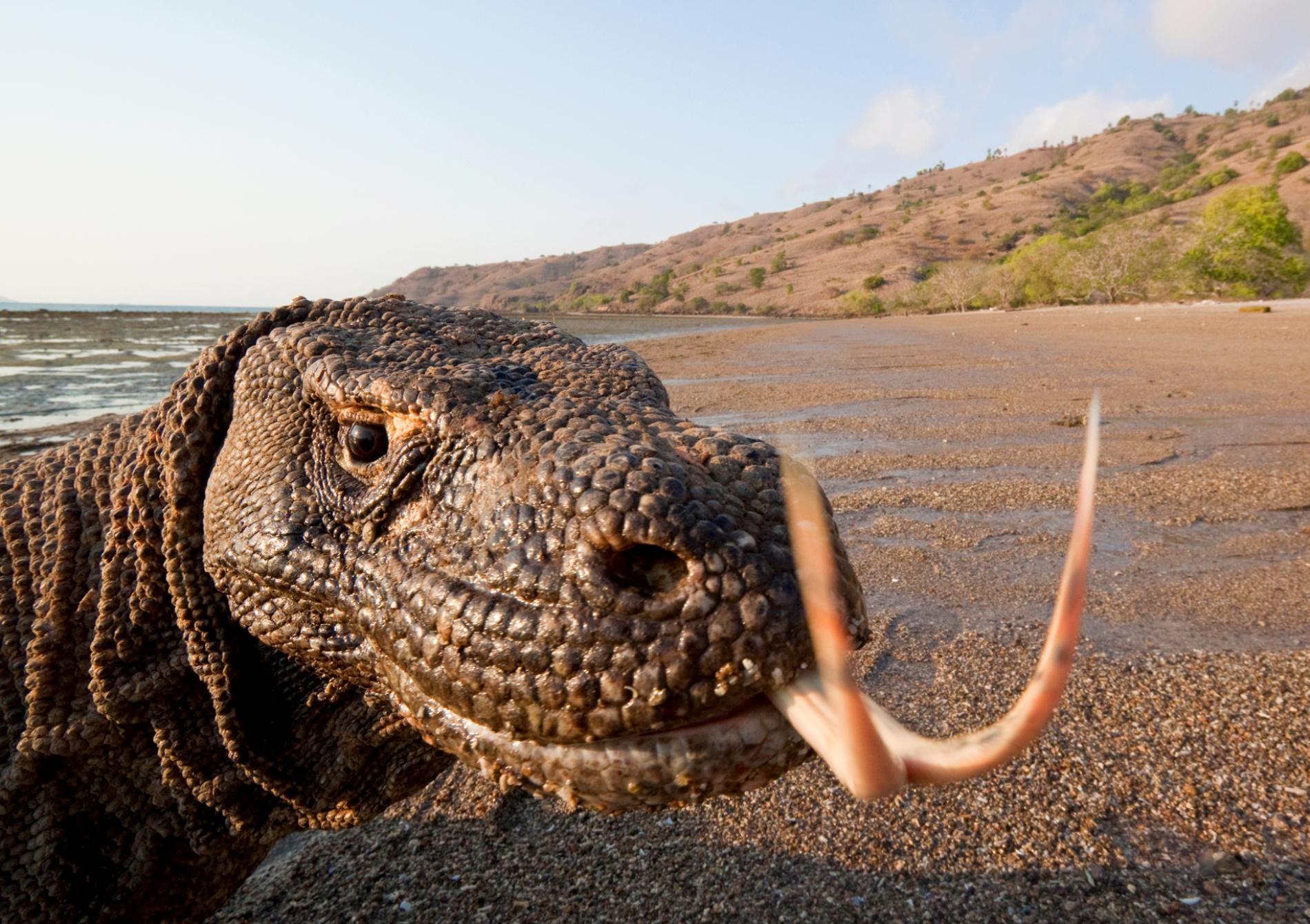 The Komodo dragon has a tail as long as its body, as well as about 60 frequently replaced, serrated teeth that can measure up to 2.5 cm (1 in) in length. Its saliva is frequently blood-tinged because its teeth are almost completely covered by gingival tissue that is naturally lacerated during feeding. It also has a long, yellow, deeply forked tongue. Komodo dragon skin is reinforced by armoured scales, which contain tiny bones called osteoderms that function as a sort of natural chain-mail. The only areas lacking osteoderms on the head of the adult Komodo dragon were around the eyes, nostrils, mouth margins, and pineal eye, a light-sensing organ on the top of the head. 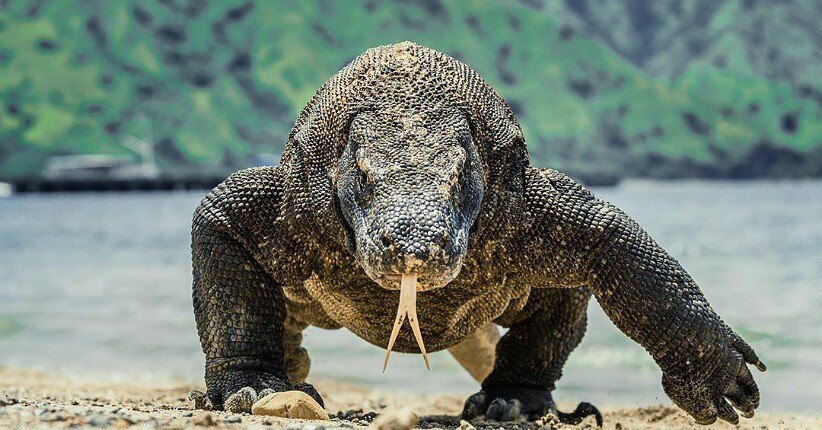 Where lizards typically have one or two varying patterns or shapes of osteoderms, komodo’s have four: rosette, platy, dendritic, and vermiform. This rugged hide makes Komodo dragon skin a poor source of leather. Additionally, these osteoderms become more extensive and variable in shape as the Komodo dragon ages, ossifying more extensively as the lizard grows. These osteoderms are absent in hatchlings and juveniles, indicating that the natural armor develops as a product of age and competition between adults for protection in intraspecific combat over food and mates.

As with other varanids, Komodo dragons have only a single ear bone, the stapes, for transferring vibrations from the tympanic membrane to the cochlea. This arrangement means they are likely restricted to sounds in the 400 to 2,000 hertz range, compared to humans who hear between 20 and 20,000 hertz. They were formerly thought to be deaf when a study reported no agitation in wild Komodo dragons in response to whispers, raised voices, or shouts. This was disputed when London Zoological Garden employee Joan Procter trained a captive specimen to come out to feed at the sound of her voice, even when she could not be seen. 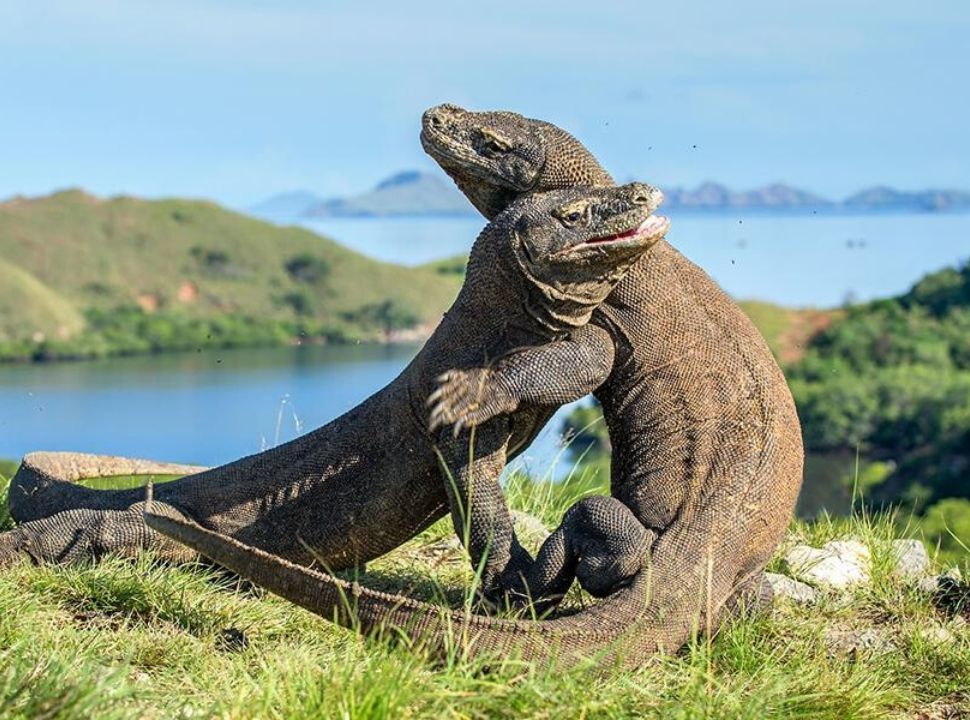 The Komodo dragon can see objects as far away as 300 m (980 ft), but because its retinas only contain cones, it is thought to have poor night vision. It can distinguish colours, but has poor visual discrimination of stationary objects.

As with many other reptiles, the Komodo dragon primarily relies on its tongue to detect, taste, and smell stimuli, with the vomeronasal sense using the Jacobson’s organ, rather than using the nostrils. 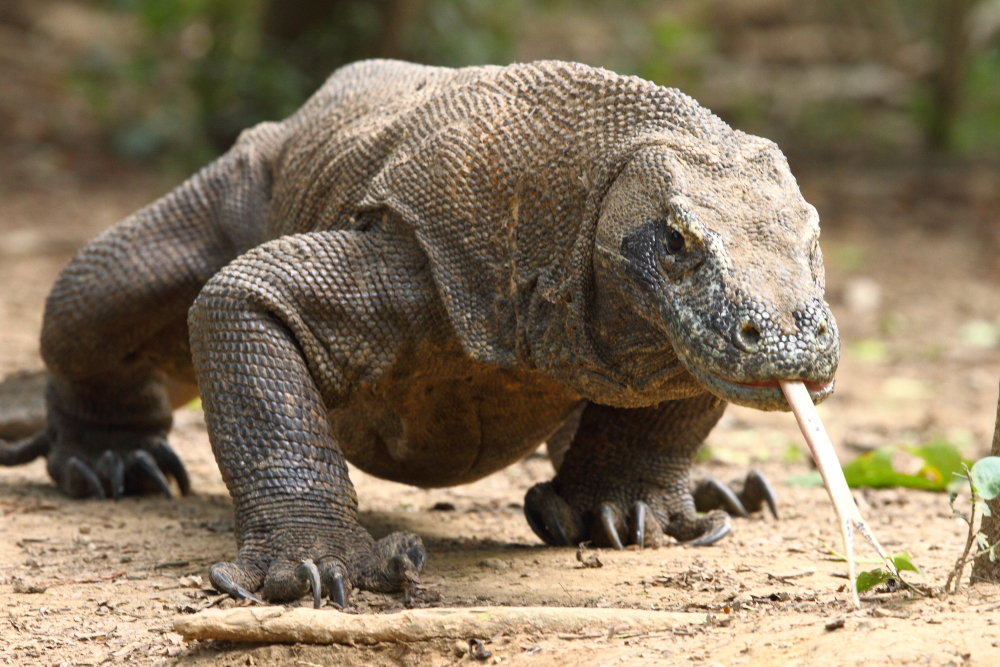 With the help of a favorable wind and its habit of swinging its head from side to side as it walks, a Komodo dragon may be able to detect carrion from 4–9.5 km (2.5–5.9 mi) away.

It only has a few taste buds in the back of its throat. Its scales, some of which are reinforced with bone, have sensory plaques connected to nerves to facilitate its sense of touch. The scales around the ears, lips, chin, and soles of the feet may have three or more sensory plaques. 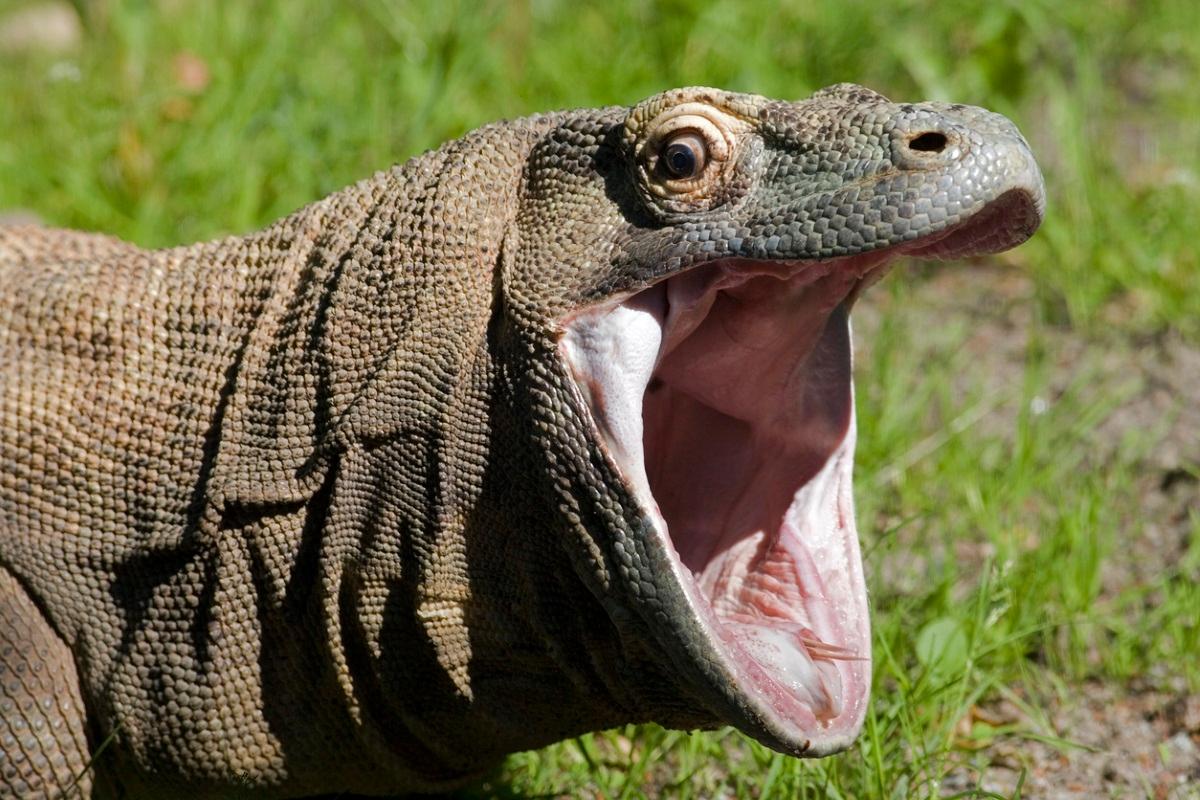 The Komodo dragon is classified by the IUCN as a vulnerable species and is listed on the IUCN Red List. The species’ sensitivity to natural and man-made threats has long been recognized by conservationists, zoological societies, and the Indonesian government. Komodo National Park was founded in 1980 to protect Komodo dragon populations on islands including Komodo, Rinca, and Padar. Later, the Wae Wuul and Wolo Tado Reserves were opened on Flores to aid Komodo dragon conservation.

Komodo dragons generally avoid encounters with humans. Juveniles are very shy and will flee quickly into a hideout if a human comes closer than about 100 metres (330 ft). Older animals will also retreat from humans from a shorter distance away. If cornered, they may react aggressively by gaping their mouth, hissing, and swinging their tail. If they are disturbed further, they may attack and bite. Although there are anecdotes of unprovoked Komodo dragons attacking or preying on humans, most of these reports are either not reputable or have subsequently been interpreted as defensive bites. Only very few cases are truly the result of unprovoked attacks by atypical individuals who lost their fear of humans. 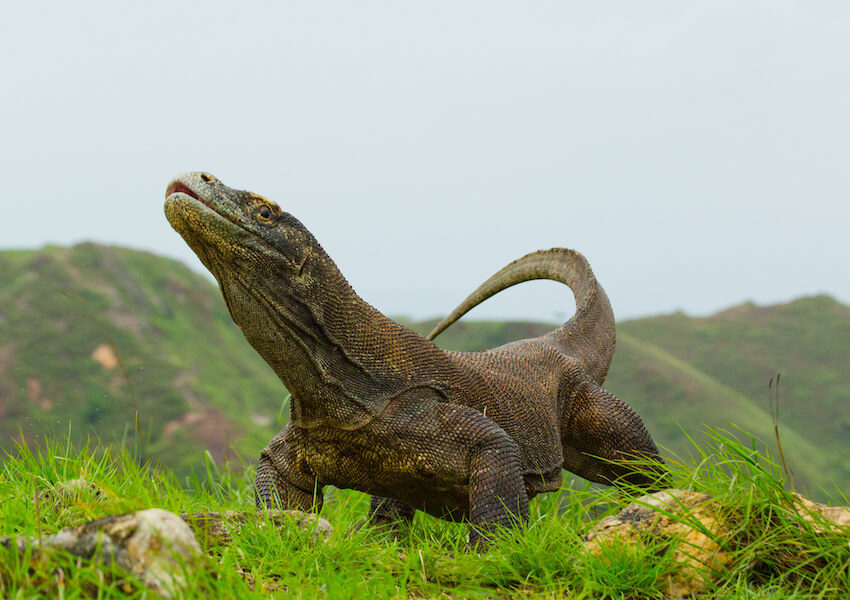 Volcanic activity, earthquakes, loss of habitat, fire, tourism, loss of prey due to poaching, and illegal poaching of the dragons themselves have all contributed to the vulnerable status of the Komodo dragon. Under Appendix I of CITES (the Convention on International Trade in Endangered Species), commercial trade of Komodo dragon skins or specimens is illegal. Despite this, there are occasional reports of illegal attempts to trade in live Komodo dragons.

The most recent attempt was in March 2019, when Indonesian police in the East Java city of Surabaya reported that a criminal network had been caught trying to smuggle 41 young Komodo dragons out of Indonesia. The plan was said to include shipping the animals to several other countries in Southeast Asia through Singapore. It was hoped that the animals could be sold for up to 500 million rupiah (around US$35,000) each. It was believed that the Komodo dragons had been smuggled out of East Nusa Tenggara province through the port at Ende in central Flores.

In 2013, the total population of Komodo dragons in the wild was assessed as 3,222 individuals, declining to 3,092 in 2014 and 3,014 in 2015. Populations remained relatively stable on the bigger islands (Komodo and Rinca), but decreased on smaller islands such as Nusa Kode and Gili Motang, likely due to diminishing prey availability. On Padar, a former population of Komodo dragons has recently become extinct, of which the last individuals were seen in 1975. It is widely assumed that the Komodo dragon died out on Padar following a major decline of populations of large ungulate prey, for which poaching was most likely responsible.

Komodo dragons have long been sought-after zoo attractions, where their size and reputation make them popular exhibits. They are, however, rare in zoos because they are susceptible to infection and parasitic disease if captured from the wild, and do not readily reproduce in captivity. The first Komodo dragons were displayed at London Zoo in 1927. A Komodo dragon was exhibited in 1934 in the United States at the National Zoo in Washington, D.C., but it lived for only two years.

More attempts to exhibit Komodo dragons were made, but the lifespan of the animals proved very short, averaging five years in the National Zoological Park. Studies were done by Walter Auffenberg, which were documented in his book The Behavioral Ecology of the Komodo Monitor, eventually allowed for more successful management and breeding of the dragons in captivity. As of May 2009, there were 35 North American, 13 European, one Singaporean, two African, and two Australian institutions which housed captive Komodo dragons.


A variety of behaviors have been observed from captive specimens. Most individuals become relatively tame within a short time, and are capable of recognising individual humans and discriminating between familiar and unfamiliar keepers. Komodo dragons have also been observed to engage in play with a variety of objects, including shovels, cans, plastic rings, and shoes. This behavior does not seem to be “food-motivated predatory behavior”.

Even seemingly docile dragons may become unpredictably aggressive, especially when the animal’s territory is invaded by someone unfamiliar. In June 2001, a Komodo dragon seriously injured Phil Bronstein, the then-husband of actress Sharon Stone, when he entered its enclosure at the Los Angeles Zoo after being invited in by its keeper. Bronstein was bitten on his bare foot, as the keeper had told him to take off his white shoes and socks, which the keeper stated could potentially excite the Komodo dragon as they were the same colour as the white rats the zoo fed the dragon. Although he survived, Bronstein needed to have several tendons in his foot reattached surgically.