Karimunjawa National Park, also Crimon Java National Park, is a national marine park designated in the Karimun Java archipelago, Jepara Regency, Central Java, Indonesia. It lies 80 km north west of Jepara, Central Java, in the Java Sea. The national park was formally declared as Marine Protection Area in 2001. Based on popular local myth, this archipelago was discovered by Sunan Nyamplungan, the nephew of Sunan Kudus who is one of the Wali Sanga.

Karimun Java is also a tourist attraction popular for its white sandy beach, pristine coral reefs, challenging treks through the hills, the pilgrimage to Sunan Nyamplungan Cemetery, and the customs and traditions of the Karimunjava community.

The Ministry of Forestry established Karimunjawa as a marine nature reserve on April 9, 1986 with the issuance of Decree No. 123 / Kpts-II / 1986. The following year, the geographic coordinates of Karimunjawa were determined.

Then, Karimunjawa was designated a national park on February 29, 1988, but at that time its status was better known as a Nature Conservation Area. This determination is based on a statement from the Ministry of Forestry No. 161 / Menhut-II / 1988. The status was finally changed to a national park on February 22, 1999 through the Ministry of Forestry Decree No. 78 / Kpts-II / 1999.

In 2005, the Directorate General of Conservation of Natural Resources and Ecosystems (Ditjen KSDAE) established the Karimunjawa zoning. This zoning determination was later replaced on March 6, 2012 with the issuance of Decree No. SK.28 / IV-SET / 2012 which is valid until now.

Karimunjawa National Park is located in the Karimunjawa Archipelago which includes 27 islands with an area of Karimunjawa designated as 111,625 ha.

In accordance with the Decree of the Directorate General of KSDAE No. SK.28 / IV-SET / 2012, the Karimunjawa zoning consists of the following: 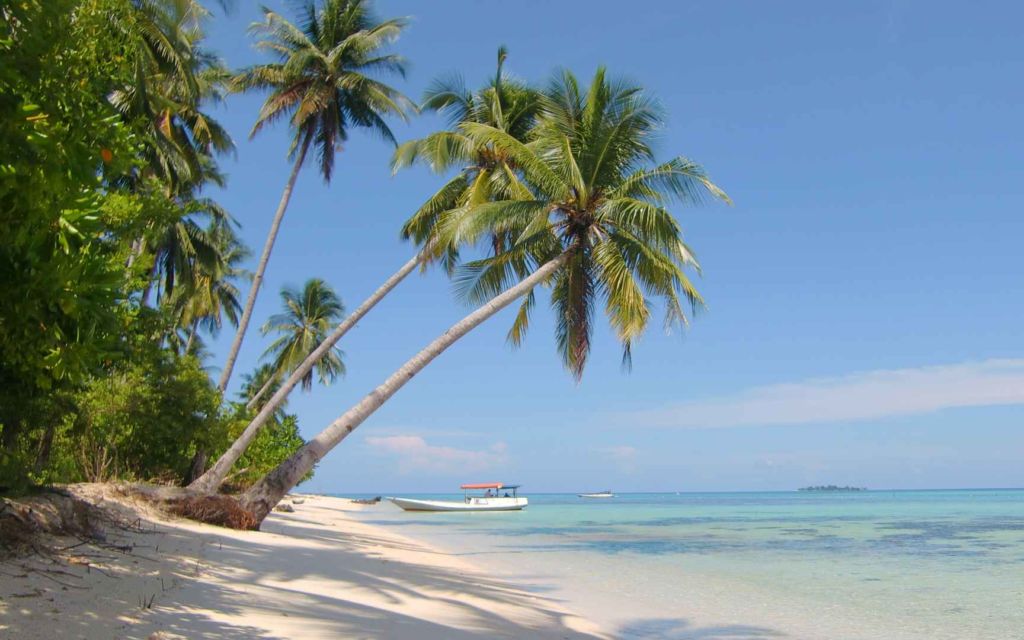 The Crimon Java archipelago lies from 5°49’ – 5°57’ South Latitude and 110°04′ – 110°40′ East Longitude in the Java Sea, north of Java. It is about 120 km from Semarang, the capital of Central Java Province; and about 80 km from the nearest town Jepara. Comprising 27 islands, the Karimunjawa subdistrict is divided into three villages, namely Karimunjawa, Kemujan and Parang. The archipelago is under the administration of Jepara Regency, Central Java Province.

The geological formation in the archipelago is mostly dominated by quartz sandstone, gravel, mud, and clay. The topography of Karimunjawa Marine National Park is a wave of low land, with elevation ranging from 0–506 meters above sea level. Gajah hill is the Park’s highest point. Temperatures range from 30-31 °C.

The biggest island in the archipelago is Karimunjawa Island. Towns or villages are located in Karimunjava, Kemujan, Nyamuk, Parang, and Genting Island. The other islands are uninhabited. 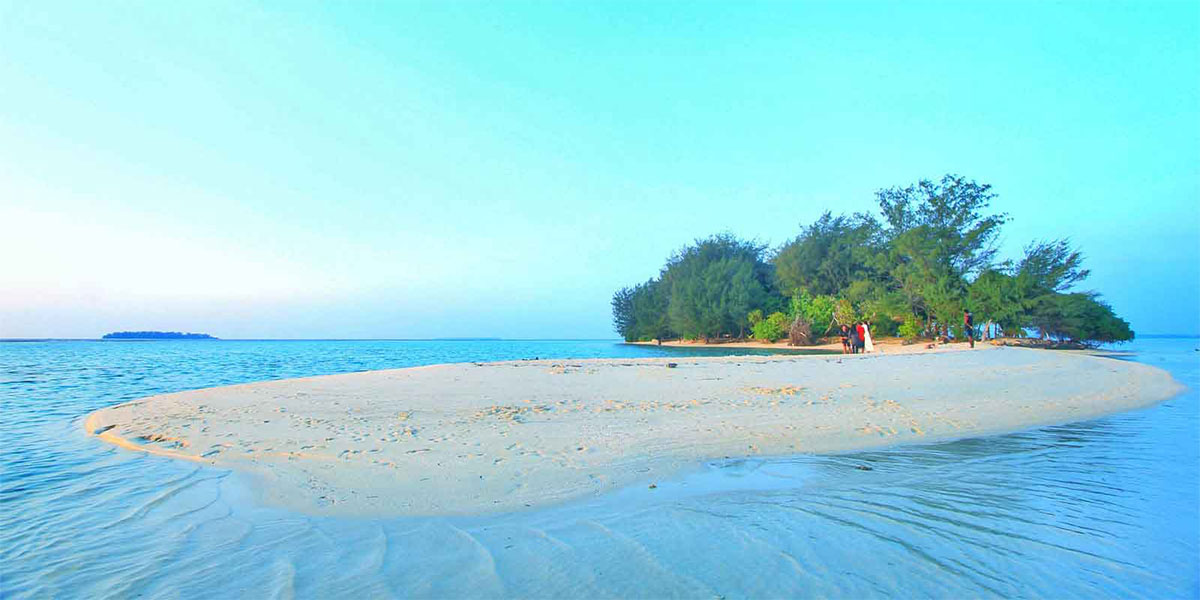 Karimunjawa National Park is geographically located at coordinates 5 ° 40’39 “- 5 ° 55’00” latitude and 110 ° 05 “57” -110 ° 31 “15” east longitude. In the Decree of the Minister of Forestry and Plantation No. 78 / Kpts-II / 1999 dated 22 February 1999 stated that the Karimunjawa Nature Reserve and its surroundings located in the Dati II Jepara Regency, Central Java Province Dati I was designated as a National Park with the name TAMAN NASIONAL KARIMUNJAWA with an area of 111,625 hectares with details as listed in the table below;

The land area on the island of Karimunjawa is a lowland tropical rain forest ecosystem -> 1,285.50 Hectares
The land area on Kemujan Island is a mangrove forest ecosystem -> 222.20 Hectares
Waters area In its development this area is designated as a nature conservation area (based on the Minister of Forestry Decree No. 74 / Kpts-II / 2001 dated 15 March 2001) -> 110,117.30 Hectares 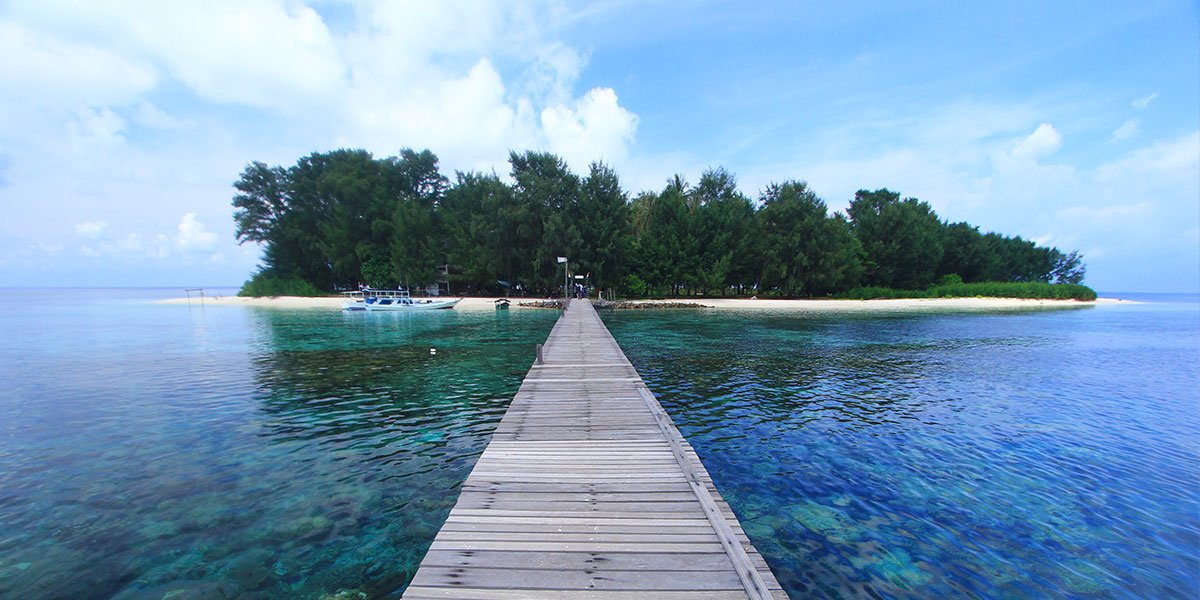 Area protection is one of the pillars of the management of the Karimunjawa National Park area. This protection effort is manifested through various area security activities carried out pre-emptively, preventively or repressively together with the Directorate General of Law Enforcement.

Security activities carried out in the Karimunjawa National Park area are the Socialization of Regulations both inside and outside the area, Routine Patrols in both terrestrial and marine areas, Joint Patrols in marine and terrestrial areas as well as the implementation of Joint Patrols with Community Forest Police Partners and Development Fire Care Community. 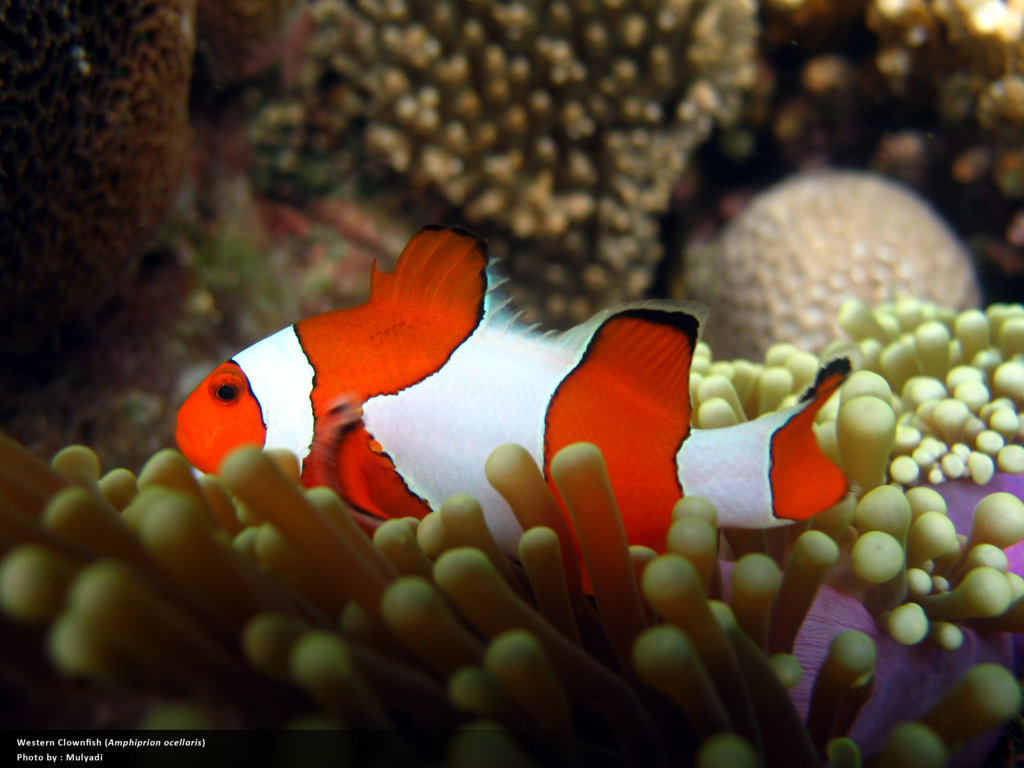 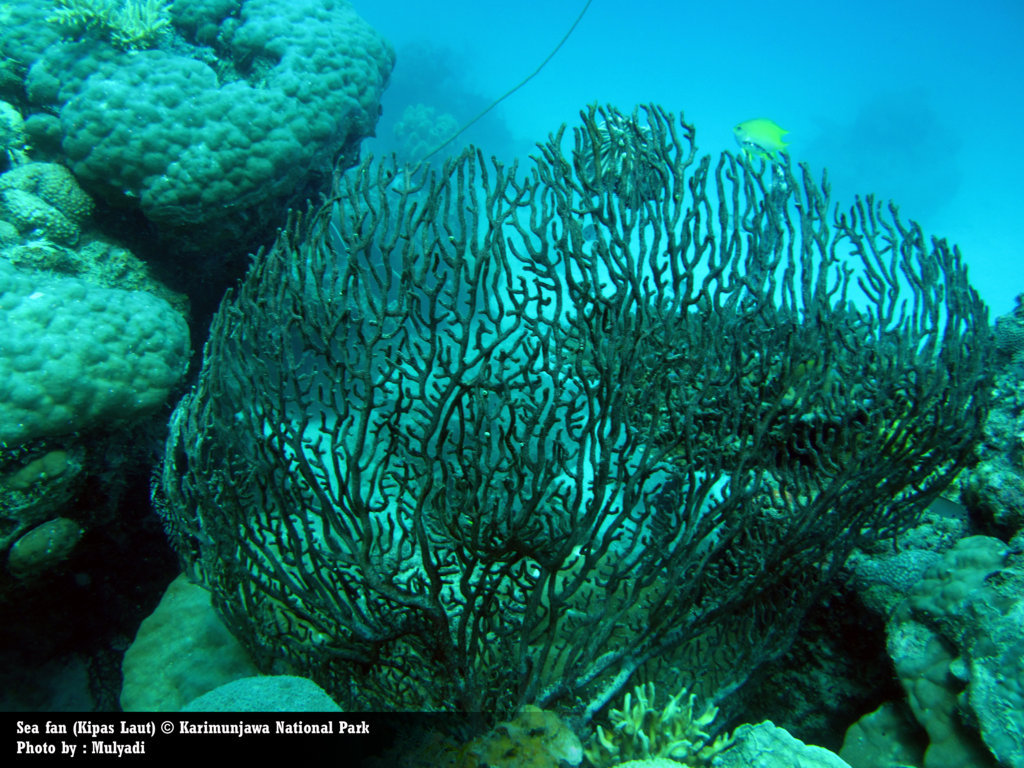 Karimunjawa’s coral reefs are made up of fringing reefs, barrier reefs and several patch reefs. They have an extraordinary wealth of species: 51 genera with more than 90 species of coral biota and 242 species of ornamental fish. Two protected biota species, black coral (Antiphates sp.) and organ pipe coral (Tubipora musica), can be found here.

Other protected sea biota include the hornet helmet (Cassis cornuta), triton trumpet (Charonia tritonis), chambered nautilus, green shell (Turbo marmoratus), and six species of clam. Around Kemujan island, the wreck of the Panamanian ship Indono, which sank to the sea bed in 1955, is now a habitat of coral fish and is a popular site for wreck diving.

The seagrasses and seaweeds 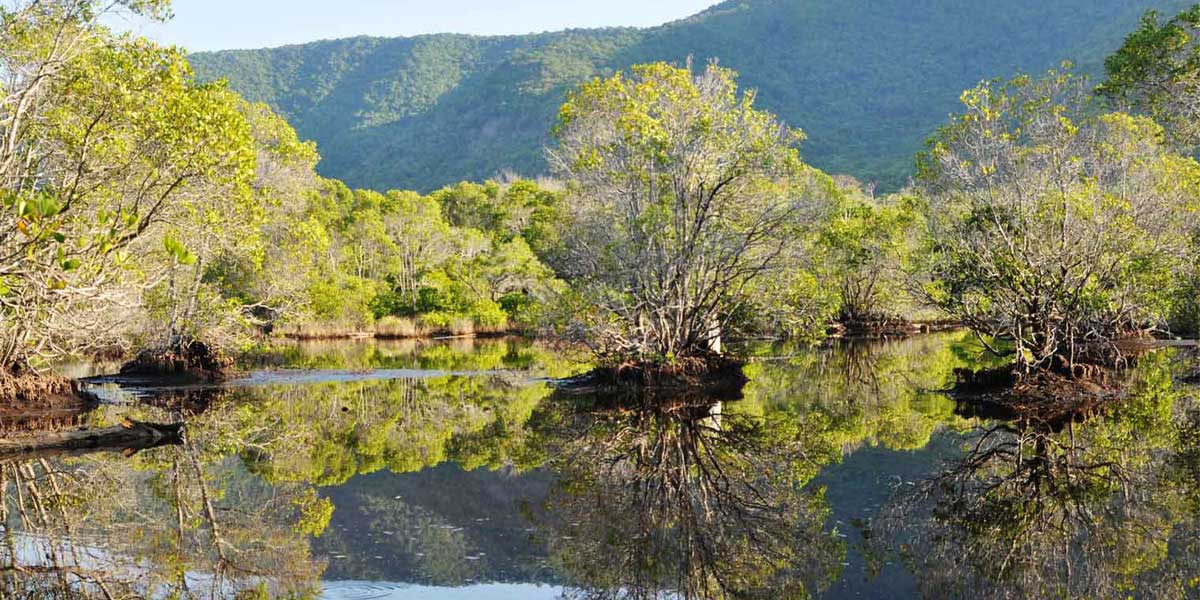 A total of 300 ha of mangrove forest covers the national park, and is the habitat for 13 genera and 32 species of mangroves, such as the Rhizophora mucronata.

The local people use these trees as raw material for souvenir handicrafts such as tasbih, kris, or staffs. It is generally believed that the wood of the endemic dewadaru tree has a legendary power of curing diseases or snake bite wounds, protecting house from thieves, or prolonging life. Recently, the population of these three tree species has deteriorated because of the increased extraction. 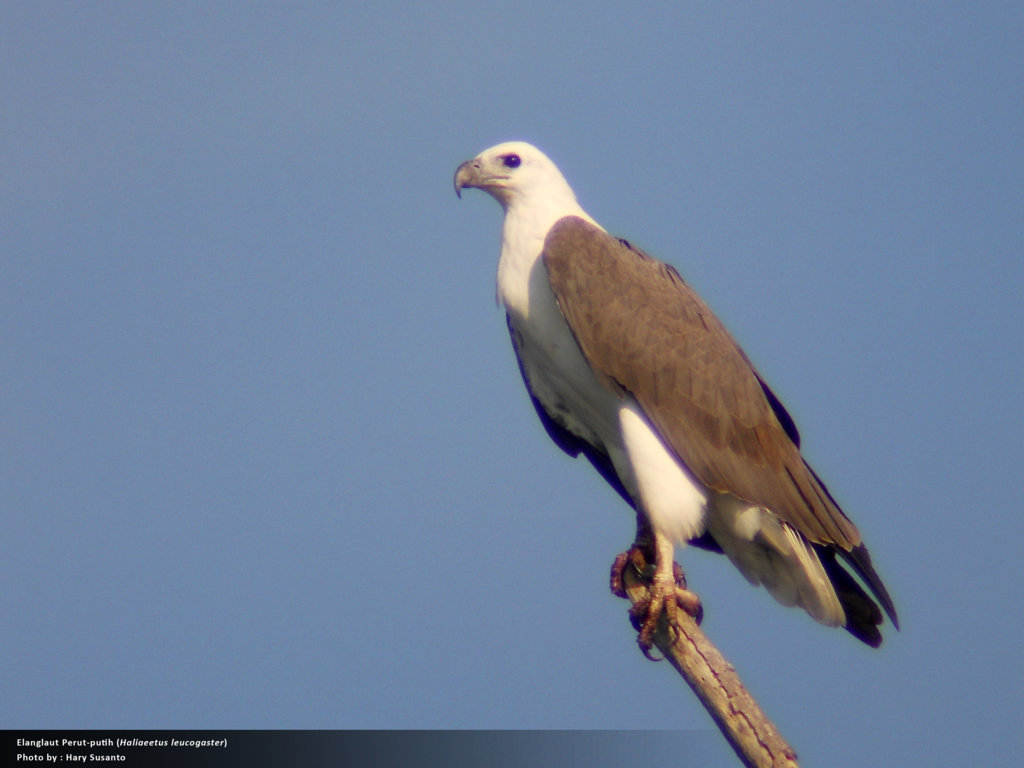 There are about forty different bird species in the island, including the green imperial-pigeon (Ducula aenea), yellow-vented bulbul (Pycnonotus goiavier) and red-breasted parakeet (Psittacula alexandri). Some migratory birds are also found in this area, such as the common sandpiper and whimbrel. 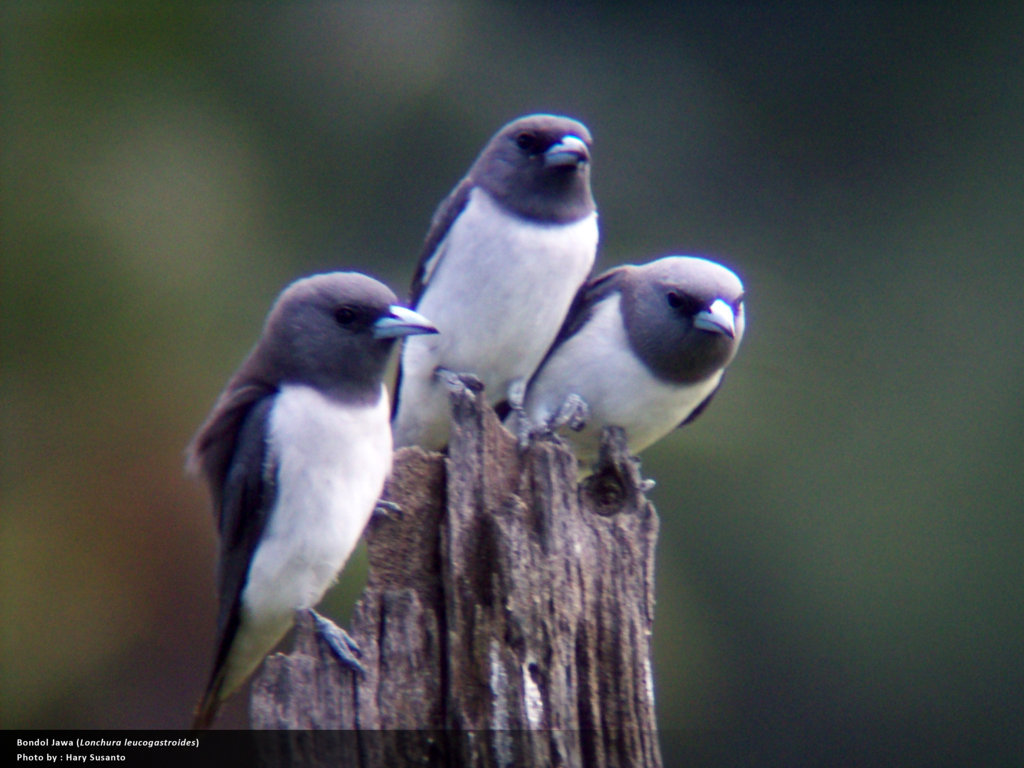 The lowland tropical rain forest is the natural habitat of the rare white-bellied sea eagle. The latest expedition report of the Indonesian Science Institute reveals that there are two endemic butterfly species, and these are the Euploea crameri karimodjawensis and the Idea leuconoe karimodjawensis.

The diversity of terrestrial animals of this park is not as high in terms of numbers as that of the aquatic animals. However, it is still possible to see Javan rusa deer (Cervus timorensis), Sunda pangolin (Manis javanica), and the Malayan pit viper (Calloselasma rhodostoma).

Several species of turtles lay their eggs on the islands, e.g. hawksbill turtle and green turtle. 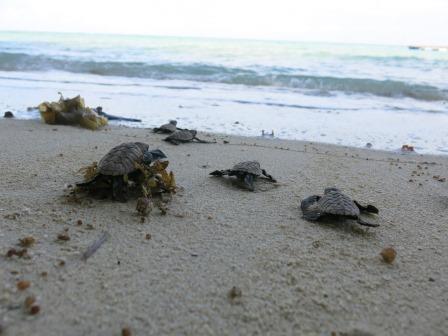 Karimunjawa Marine National Park is one of the six marine national parks in Indonesia, and was among the first areas recognised as being important for conservation and marine biodiversity protection. It was formally declared a Strict Natural Reserve in 1986 and has since been declared one of the priority areas for the conservation of marine biodiversity in Southeast Asia.

Then in 1999, the Ministry of Forestry established Karimunjawa archipelago as the Karimunjawa Marine National Park covering 111,625 ha. In 2001, an area of 110,117.30 ha was declared as Marine Protection Area (MPA). 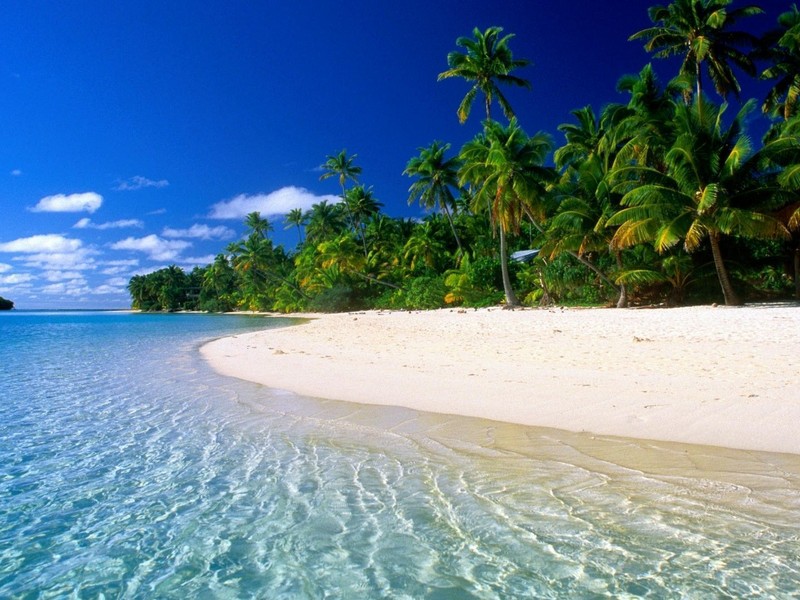 Based on the functions, Karimunjawa National Park was divided into four zones:

Due to the dynamic process of management, recent degradation and the degree of destruction, the current zones are no longer effective for management. The Karimunjawa National Park is now proposing a new zone management through a project that began in 2002 and is still ongoing. 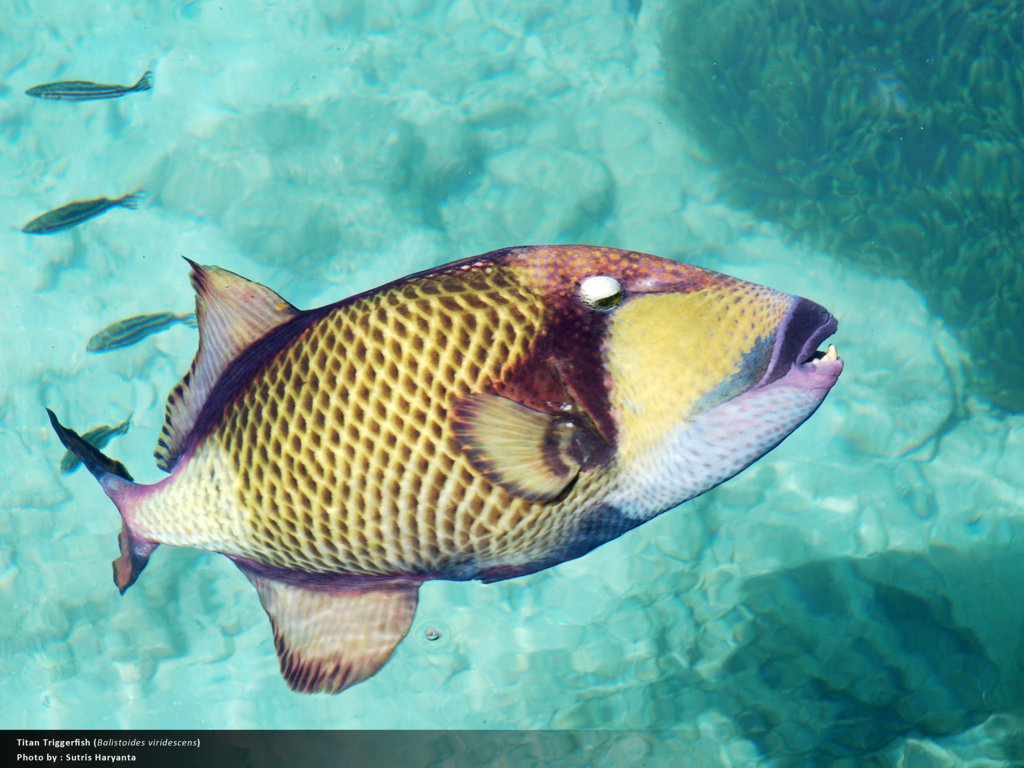 The legend of Karimunjava is related to Sunan Nyamplungan story. Sunan Nyamplungan was born Amir Hasan, the son of Sunan Muria, one of the Wali Sanga. He was very spoiled by his mother, and is a disobedient child. By his father, he was entrusted to his uncle, Sunan Kudus. After some time being under Sunan Kudus’s upbringing, he became an obedient young man. He was sent back to his parent, only to turn into a disobedient person again. Furious of his constant disobedience, Sunan Muria strove to inculcate in him a certain hard lesson. So one day Sunan Muria drove his son away from home with the warning that he was not to set foot on Java again. 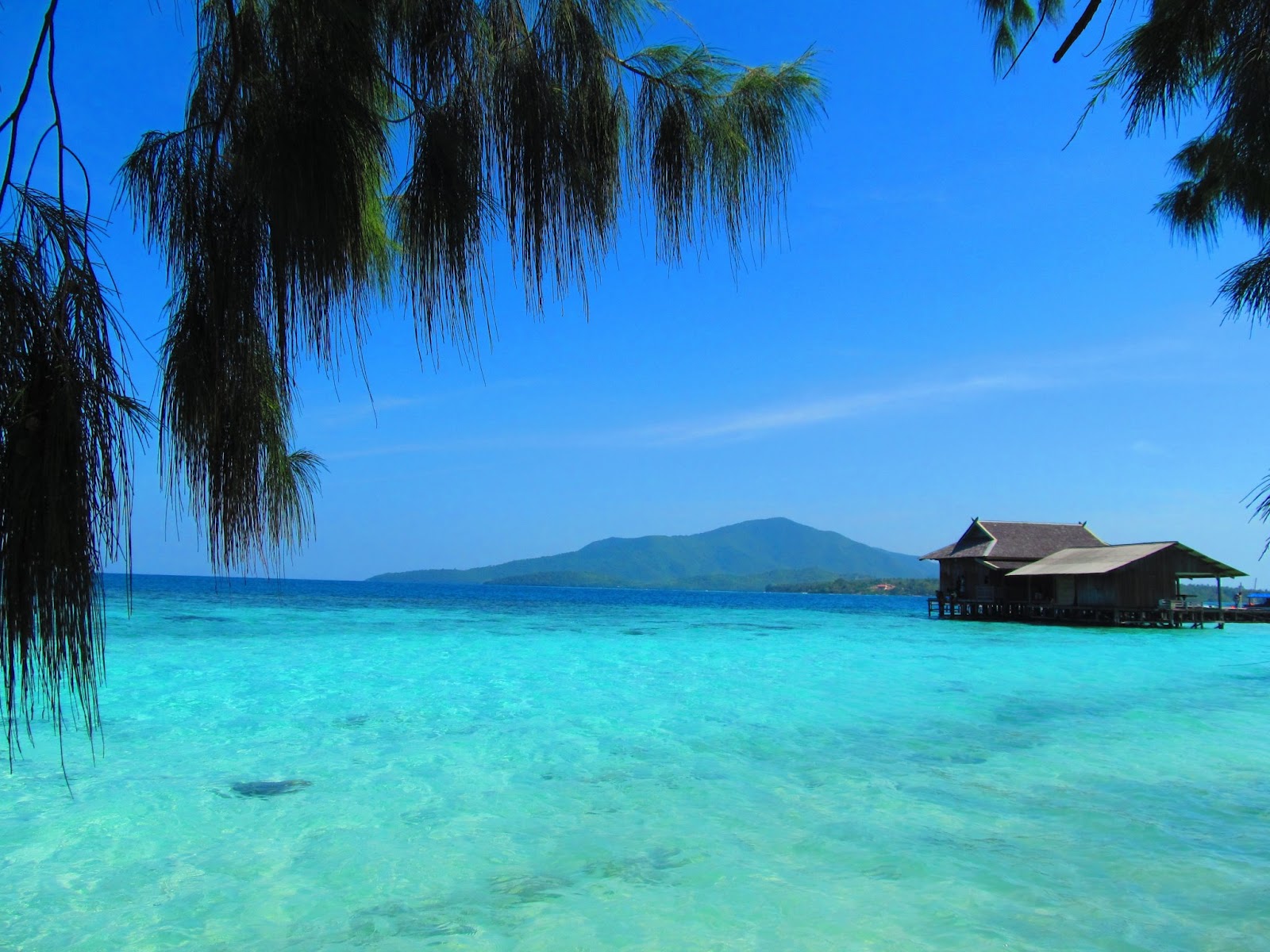 Not willing to disobey his father again, he prepared himself for the journey. In sadness, the son left Mount Muria where they dwelt and moved on to the open seas to the north. He sailed on a boat for many days through stormy weather and amidst huge waves, not really knowing his destination and perhaps with little will to survive. Then one day, his boat landed on the shores of a small, uninhabited island. Meanwhile, from the peak of Mount Muria in Java, the boy’s father was secretly watching over his son clairvoyantly. But for some reason his vision was vague and unclear, and thus lost track of the whereabouts of the boy on that island. In the old Javanese language, the word “vague” is translated as kerimun. Thus the island became known as “Karimun-java.” 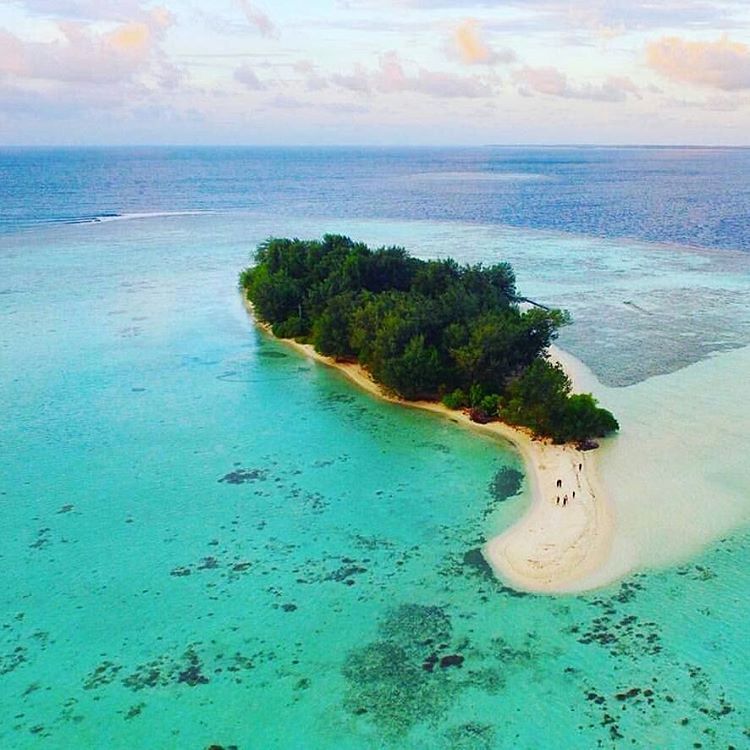 The boy continued his journey inland bearing two wooden staffs as walking sticks to assist his journey. He retrieved these from the shore. These two short poles wounded him while his boat was capsized to shore by the sheer power of the waves. In the middle of the forest he poked the two staffs to the ground and started to rest from the tiresome journey. Miraculously, in that very instant the two staffs grew into magnificent trees. In awe of the incident, he named them “Dewadaru” (also known as Nyamplung tree). In the present day, the place where he rested now stands the village of Nyamplungan.

In other version of the story, Amir Hasan was accompanied by two guards and two seeds of Nyamplung fruit with him during his journey. He also brought a mustaka (part of the top of mosque) which is now still residing in complex of Sunan Nyamplungan grave. The place where Amir Hasan resided was crowded with Nyamplung tree. The Dewadaru or Nyamplung tree is still regarded as sacred in the Karimunjawa archipelago. 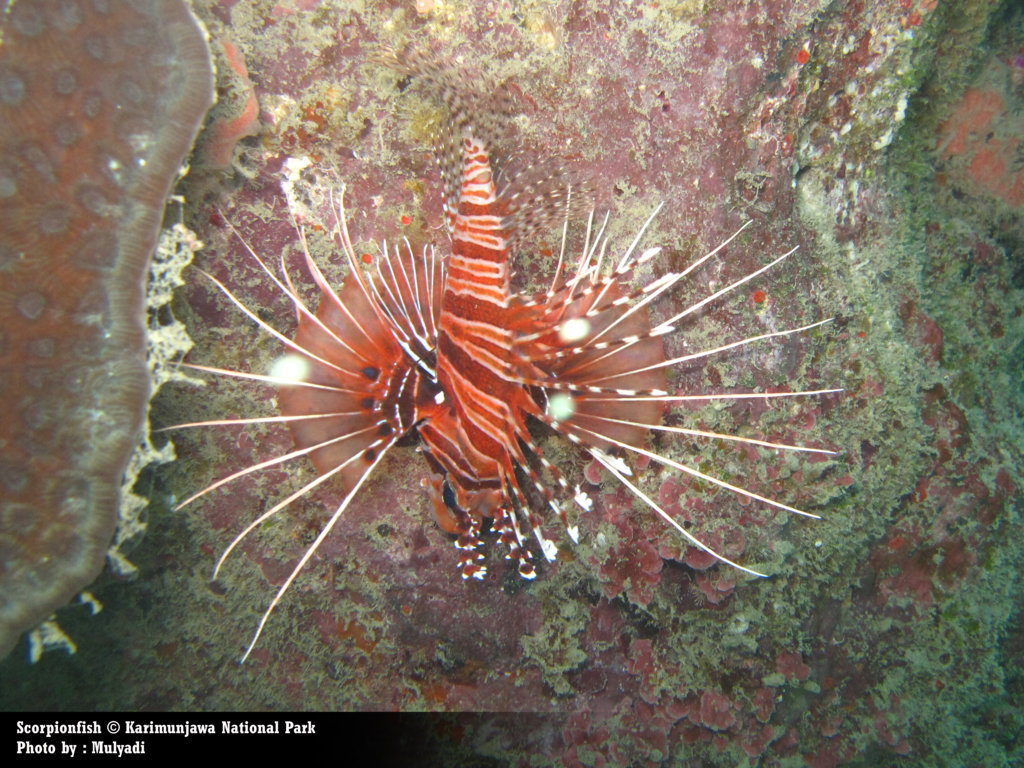 There are numerous strange stories related to the magical Dewadaru tree or its wood. To the local inhabitants these are no longer a matter of belief but knowledge and conviction gained from day to day experience. Being sacred, the Dewadaru is used only for devotional and protective purposes. One hardly finds the villagers using this wood for the fashioning of furniture or as a building material; and only the courageous would use it in their spiritual activities. The trees are not too numerous on the islands nowadays and therefore they are forcefully preserved.

The Dewadaru is esteemed highly for their traditional and cultural value, and regarded as the totem guardians of the island. Because the occult power of the Dewadaru is well known, many disrespectful outsiders plunder the wood seeking to possess and misuse the power within it for egoic purposes. But it is also believed that Sunan Nyamplungan, the guardian of the island, or his proxy, plays a role in protecting the place from pilferers. Some say that the Adept sometimes appear as a gigantic bat to those who carry-out their negative intentions.

In 1992, the faculty of biology of the University of Gajah Mada conducted some research on the Dewadaru and the report of their analysis states that this tree is quite rare and not easily propagated. There are two species to be found in the Karimunjava islands: the first is Baccaurea sumatrana from the family Euphorbiaceae; the second is Fagraea elliptica from the family Loganiaceae.

The Dewadaru is supposed to be found solely in the Karimunjava islands. Although almost unheard of, there is at least one Dewadaru tree to be found in Java in the area of Mt. Kawi in the region of Malang, East Java. Strangely enough, those living in this area sanctify the leaves rather than the wood.

The archipelago is accessible via flights from Surabaya to Dewandaru Airport in Kemujan Island. There is also a regular ferry and fast boat between Jepara or Kendal (near Semarang) ports to Karimunjawa island.

There are many homestays or guests houses in Karimunjawa. There is one Boutique resort close to the village and a luxury resort on its own island.